What is the LG G Watch R?

The LG G Watch R is the company’s second attempt at making an Android Wear smartwatch. Its first, the LG G Watch, was rubbish – it’s hard to see how it couldn’t improve on that. Like the Moto 360, this time it’s gone with a round watch face, while also adding a heart rate sensor, a slightly bigger battery and a sharper screen.

And the good news is this is the best Android Wear watch we’ve tried, even compared to Motorola’s popular effort. We still don’t feel comfortable wholeheartedly recommending it due to Android Wear’s nascent development and continuing challenge of battery life, but if you must own a smartwatch right now then the G Watch R is the one to own. 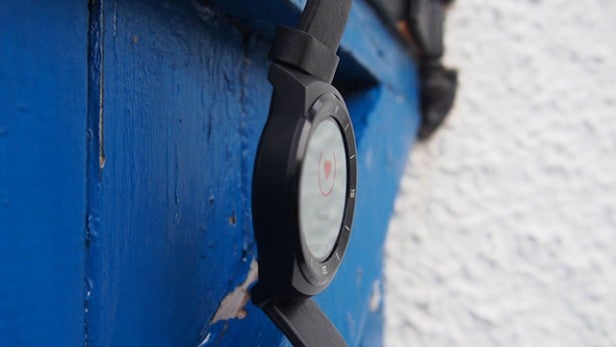 The first G Watch was as plain and boring a watch as you could get. That uninspiring rectangular face, rubber strap and thick black screen bezel made it feel more like a prototype than a watch you’d happily roll up your shirt sleeve to check the time on.

Fast-forward four months and the G Watch R is an entirely different prospect. This is a smartwatch that actually looks good. In fact, it’s best looking one we’ve seen.

Unlike Motorola’s smartwatch, the G Watch R’s round display is actually a full circle – the Moto 360 had an unsightly flat bottom edge on the screen. There’s the thinnest black bezel surrounding the round display, but it’s barely noticeable especially when you opt for one of the darker watch faces. 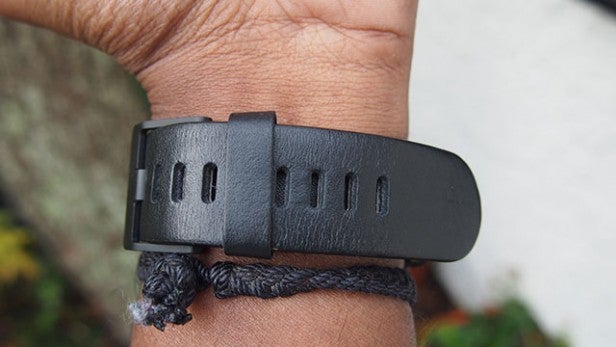 The plastic dial around the display gives the G Watch R an attractive, sports chronograph look. It’s better suited to analogue watch faces as a result, though you still have the option of digital ones if you prefer. You get the same IP 67 certified water and dust resistance as its predecessor, so you can submerge it in water up to 1 metre for 30 minutes and we can confirm it passes the shower test.

At first glance it looks as chunky as the Moto 360 (11mm) and when you factor in the dial it’s a shade thicker at 11.1mm. But the G Watch R carries its chunkiness much better. The Moto 360 looks like a big watch pretending to be small; the G Watch R knows it’s big and plays up to it in a similar manner to a Casio G-Shock. Clearly this makes it a distinctly male biased watch, but at least it picks a side.

LG has improved the strap since the first G Watch, too. It’s still the 22mm kind that can be replaced, but the new black, genuine leather compliments the more luxurious body. It’s feels a little stiff initially, but it’s not something that makes it uncomfortable or irritating to wear.

Unlike the G Watch, there’s a power button where you’d normally find the watch crown, so you don’t have to use that palm over the screen gesture to dim or turn off the display. The back houses the now compulsory heart rate sensor and the charging pins for the supplied dock. 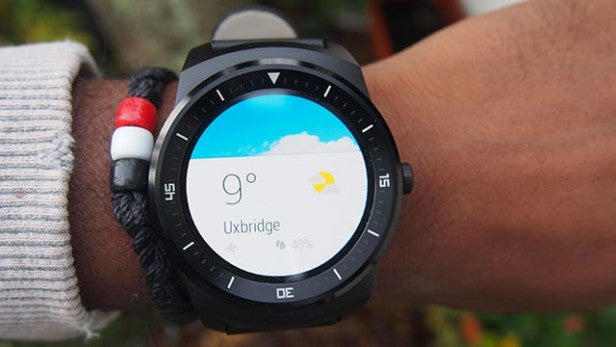 The G Watch R sees LG move from the LCD display used on the G Watch to a new 0.5mm thin P-OLED display. This is the same screen technology used in the G Flex smartphone and while the company’s leaked roadmap sees the P-OLED (Plastic OLED) shaping the future of bendable devices, for the G Watch R it promises similar qualities to AMOLED displays. You can expect richer colours, a brighter display, better outdoor visibility and superior contrast ratio performance compared to LCD-based smartwatches.

The G Watch R delivers on all those fronts. It’s up there with the Samsung smartwatches for vibrancy, and it’s much easier to use to use in direct sunlight than the G Watch. Icons and text don’t have that same fuzzy, blurry quality as was the case on the first LG Android Wear smartwatch. This is down to the improved 320×320 resolution, which surpasses the Moto 360 and matches the Gear Live’s AMOLED display resolution.

One of the most interesting display features is the new Power Save mode (PSM). When you are running the watch in ambient mode, which keeps the watch in an always-on state, it will still display the watch hands so you can tell the time without significantly sapping the power supply. 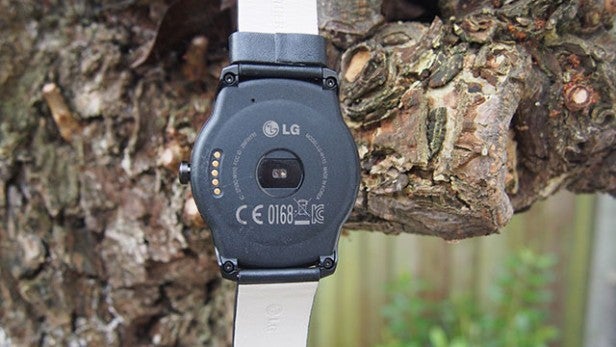 Inside, the G Watch R uses the same components as the first LG Android Wear watch. There’s a 1.2GHZ Qualcomm Snapdragon 400 processor with 512MB of RAM and 4GB of storage. It’s ample for the demands placed on a smartwatch. That 4GB of storage will come in handy when the latest Android Wear update lands and adds offline music playback, so you are not so reliant on carrying a phone.

There’s the same 9-axis sensor setup, with gyroscope, accelerometer, compass, barometer now joined by a heart rate monitor. There’s no GPS, which is disappointing but not a surprise. Sony’s Smartwatch 3 is the only Android Wear watch to include the feature, but it’s bound to drain the battery too quickly to be useful.

That heart rate monitor works much like those on the Gear Live and the Moto 360. It’s integrated with the Google Fit platform and in our time with it is really only suited to checking resting heart rate. Continually tracking heart rate data is more problematic and doesn’t compare to a dedicated running watch like the TomTom Runner Cardio or a heart rate monitor chest strap can deliver. Readings are at least accurate compared to the Adidas MiCoach Smart Run fitness band we ran it against, but barking ‘show me my heart rate’ when you are out of breath is not great.

Like the G Watch, a little vibration motor gives notifications a more physical feel so you don’t miss them, while the embedded microphone is positioned near to the face to ensure commands are picked up nice and clear.