The Moto 360 is the Android Wear-running smartwatch everyone was raving about before the Apple Watch turned up. When Motorola first unveiled the 360 earlier this year, it was the only manufacturer to opt for a more traditional round case and watch face. With the upcoming arrival of the LG G Watch R, though, it won’t be the only round Android Wear watch for much longer.

Priced at £199, the Moto 360 is the most expensive Android Wear device currently available, costing £30-40 more than the LG G Watch and the Samsung Gear Live. For that extra money, you do get a more elegantly crafted design, but the awkward Android Wear experience and battery life issues still make it tough to recommend it over its rivals. 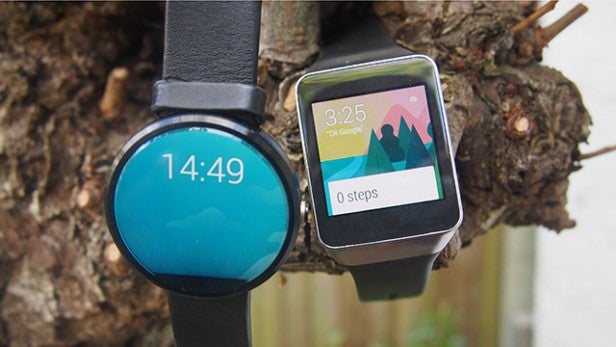 The round watch face is the feature that endeared the Moto 360 to most, but unfortunately it’s a circle that’s not so perfect when you get up close. The first thing is how chunky the case actually it is. At 11mm high it’s thicker than most smartphones and on our small wrists it does have a cumbersome look. Compare it to most standard analogue watches and the Moto 360 simply doesn’t have the elegance to make it attractive on the wrist.

We had the black model and it certainly gives off a ‘prototype’ vibe more than the lovely bare stainless steel version. It definitely feels more solid and robust than the predominantly plastic G Watch and the Gear Live but it just feel plain, ordinary and not very pretty.

It says a lot about a watch when the strap is actually the nicest part. Motorola uses Horween leather, and while that probably won’t mean anything to you, we do know that it sits snug on the wrist and doesn’t provide any irritation. A stainless steel bracelet option is on the way, which might be a better accompaniment for the stainless steel watch face, but it still won’t hide the fact that this is far from a sleek timepiece. 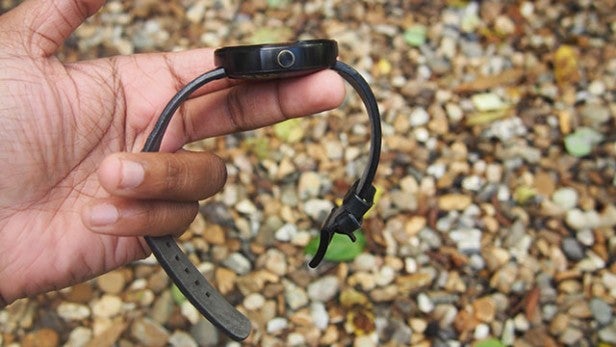 But the oversized case isn’t the only design issue we have with the Moto 360. Another is the black bar at the bottom of the screen, snipping off the bottom of what would have been a nice full-circle display. The reason it’s there is to accommodate the ambient light sensor, which shouldn’t be confused with the battery-sapping ambient always-on screen mode you can turn on in the settings. Unlike other Android Wear watches, the ambient light sensor automatically adjusts brightness depending on the environment, to help improve visibility. It’s at the expense of the watch display looking as nice as it could be and it’s up to debate whether it will bother most. It definitely bothered us, though.

A further issue is that the screen doesn’t sit flat with the bezel and when you are viewing notifications, especially on lighter backgrounds you get some refraction at the edges of the display, which creates a weird warping effect. It’s not as a big a problem as the black bar, but it’s enough to put us off.

To keep up the traditional watch look, there’s also a watch crown, which doesn’t have Apple Watch-style functionality, but can be used as a shortcut to the Moto 360 settings if you don’t want to rely on Google Voice Search. On the opposite side are dual microphones to help pick up voice commands, while around the back is where you’ll find the optical heart-rate sensor. This is a similar setup to the one found on the Gear Live, but has the ability to continuously measure heart rate and resting heart rate to enhance its fitness credentials.

Surrounding the optical heart-rate sensor is the inductive charging surface, to support wireless charging, which means you’re not entirely reliant on the proprietary charging cradle that’s included in the box alongside the wireless charging dock.

Like the first round of Android Wear watches, the Moto 360 is water resistant with an IP67 certification, so you can submerge it in water up to one metre in depth for 30 minutes. As we found while wearing it in the shower and caught out in the rain during a run, you’re going to have a hard time using the touchscreen in those conditions, and that leather watch strap can stay wet for a while before it finally dries off. 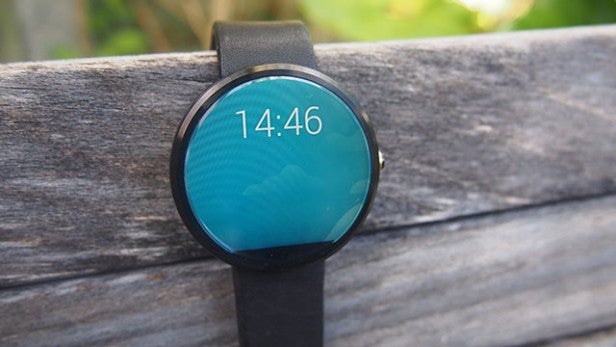 The Moto 360 uses a 1.5-inch backlit LCD IPS display, which is a smaller surface than rival Android Wear options – although without a thick bezel it actually seems a little bigger. It has a 320 x 290 resolution with 205ppi pixel density, so promises roughly the same screen quality as the G Watch and the Gear Live, and similarly struggles when you have to display images.

It’s brighter than rival watches, and that’s without resorting to the maximum brightness setting, which can take people by surprise at night. It fares well for visibility in the bright outdoors, thanks to the ambient light sensor at the bottom of the screen. It doesn’t match the Samsung’s more vibrant, colourful AMOLED display, but it’s still decent enough screen quality for notifications and most apps.

Screen responsiveness is good, registering swipes and prods to launch apps perfectly well when you’re stationary. On the move, however, it’s a slightly different story and it can take the extra swipe or press to get it to work. The Moto 360 isn’t alone in this – it’s something that needs to be addressed across the wearable board.

For those worried about screen durability, Motorola uses Gorilla Glass 3. That not only means there’s an extra layer of protection over the watch display, but it also helps to improve viewing angles. 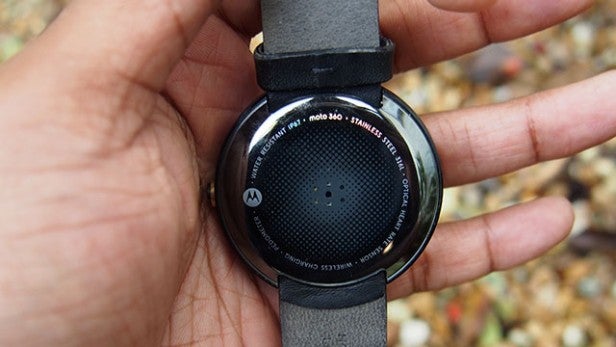 The 360 again doesn’t differ too much from the competition. There’s Bluetooth 4.0 Smart to connect to Android phones running Android 4.3 Jelly Bean or above. The brain is a TI OMAP 3 processor, which is a slightly older CPU setup compared to the Snapdragon 400 architecture nestled inside its rivals. That’s accompanied by 4GB of internal storage and 512MB of RAM to match other Android Wear smartwatches.

There’s not a great deal of difference in performance here. There’s some slight lag in general navigation compared to the Gear Live, for instance, and processing voice search queries isn’t as quick as we’d like it to be. We’d like more power, but we can only imagine that packing any more in there will make this watch chunkier, and nobody wants that.

Saying ‘Okay Google’ is still a core part of the Android Wear experience, so Motorola has included dual microphones to ensure voice commands come out clearly. It works well, but not noticeably much better than on previous Android Wear watches. When you’re gasping for breath mid-run, it can struggle to make out simple commands designed to be recognized by the 360, such as: “Show me my heart rate.” 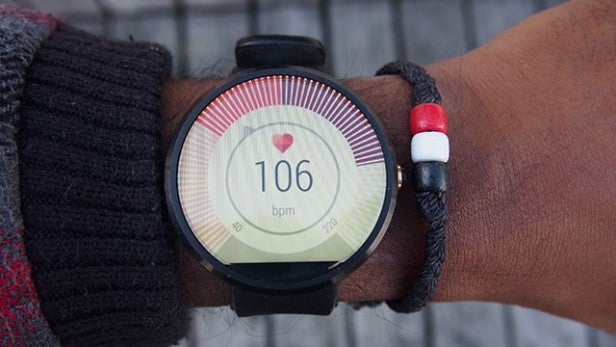 On the fitness side of things, Motorola includes a pedometer to track steps, plus a heart-rate monitor. It’s built to work with Google Fit and Motorola’s own Heart Rate and Heart Rate Activity applications. That almost immediately confuses the process, so the one you really need to worry about is the heart-rate section. Here you’ll be able to see how hard (or not so hard) you’re working out. The problem, as with the Gear Live, is that the heart-rate readings are inconsistent and at times it struggles to deliver readings at all.

Testing it next to the TomTom Runner connected to the Polar H7 heart-rate monitor chest strap and the Epson Pulsense tracker with its dedicated heart-rate sensor, measurements were accurate at times but mostly generated readings that were either slightly above or below the more accurate chest strap. When out running, it often prompted us to re-adjust when it couldn’t take a measurement. The Moto 360 isn’t a ready replacement for a dedicated running watch with heart-rate monitor support.