Apple’s best-selling phone this past year is also its most affordable, as the iPhone XR expertly treads the fine line between value and performance. Can the brand infamous for its pricey tech replicate this success in 2019/2020? Here’s all we know so far about the potential sequel.

The iPhone XR is priced at £749/$749, which puts it comfortably within true Android flagship territory, but it remains relatively affordable when compared to its Apple siblings, the iPhone XS and iPhone XS Max.

Evidently a few compromises were made in order to hit a lower price: firstly, it adopts a Liquid Retina LCD panel rather than higher-end OLED display, and secondly it has just a single rear camera. But it still runs on the top-notch Apple A12 Bionic chipset, and unlike the premium XS twins it’s also available in a range of six different cheery colours.

One year on, will the iPhone XR 2 close the gap between itself and the Apple flagships while retaining a tempting price? Below we’ve summarised all we know so far, and we will regularly update this page as we learn more.

The iPhone 11 will be the head of Apple’s new family of smartphones, while the iPhone XR 2 — or 11R, or whatever it’s called — will be the most junior member in terms of specifications and price.

This new iPhone range will make its debut at an Apple launch event in September. Following that, the iPhone 11 will most likely arrive on store shelves at least a couple of weeks ahead of the more affordable XR 2 in attempt to entice the early adopters into spending big. After all, that’s how Apple played it with the launch of the XS and XR last year and there’s little reason to think the company will change its strategy.

The next XR would arrive running Apple’s upcoming iOS 13 software out of the box, boasting every new feature that the company has teased over the last few months since WWDC 2019. Highlights include a dedicated dark mode that can be automated, plus native gamepad support for the likes of the PS4’s DualShock 4 or Xbox One S controllers with iOS over Bluetooth.

The device will be powered by Apple’s own A13 chipset and will most probably sport a new dual camera setup. 5G is not expected to reach any of the iPhones until next year, so we definitely wouldn’t expect the XR 2 to boast this feature.

For at least one more year, iPhone are expected to retain Apple’s proprietary Lightning connector rather than adopting a USB-C port; however, a fast-charger USB-C adapter is expected to be supplied with the device in a tentative step towards greater convenience and compatibility.

Release date – When is the iPhone XR 2 out?

Ever since the iPhone 5 was introduced in 2012, Apple has launched its mainline smartphones in September. This is such a well-established trend that we’d be shocked if the iPhone 11 and iPhone XR 2 weren’t launched in September too. Here’s the launch schedule of previous devices in the series:

There’s one thing to bear in mind if you’re saving up for the iPhone XR 2. Last year’s model arrived in shops one month after its premium siblings, so be prepared: you might have to be disciplined and resist the temptation of the fully-fledged iPhone 11 for another four weeks if the iPhone XR 2 is on your wishlist.

Price – How much will the iPhone XR 2 cost?

One of the most appealing aspects of 2018’s iPhone XR was its price. While it was by no means a snip in comparison to Android competitors, it did at least trim a healthy £250 off the price of the iPhone XS base model.

The asking figure of next year’s version could well creep up slightly, following the general market trend. There’s still no sign whatsoever of Apple offering a phone similar in price to the smorgasbord of mid-range Android phones, so the iPhone XR 2 is still going to be your best bet if you want to save a little cash while buying a brand-new iPhone.

Performance –  How powerful will the iPhone XR 2 be?

Last year the iPhone XR packed the exact same A12 Bionic chip as the iPhone XS, and we anticipate the same move to be made in 2019. We’re expecting the next A13 SoC (as it’s expected to be called) to make its debut in both the iPhone 11 series and the iPhone XR 2.

The A12 was a hugely impressive mobile chip, thoroughly recommended even for the most demanding power users, and we can only anticipate further improvement from the next generation. However, the rumour mill currently speculates that this version will also have a 7nm node like its predecessor; the step up to 5nm might take until next year to be ready for production.

While you’ll find Android devices with up to 12GB of RAM, Apple has chosen to fine-tune its software for efficiency rather than cramming in more memory. The company has been vindicated in its decision by outstanding performance results, and so we reckon the XR 2 will have a maximum 4GB of RAM.

Battery — How good will the iPhone XR 2 battery be?

The iPhone XR offered very impressive battery life; so much so that we picked it as the device’s standout feature. Forbes have recently reported that the iPhone XR 2 is likely to house a 3110mAh battery, which would just be a slight improvement on the 2942mAh battery capacity offered by its predecessor. Nonetheless, the new capacity would still be the biggest ever found on an iPhone even though it shies in comparison to the massive batteries we’ve seen on much cheaper Android phones, such as the 5000mAh slab on the Motorola G7 Power.

The disappointing element of iPhone XR’s battery is that it is accompanied with a miserly 5W charger — that’s the same power rating as the one that shipped with the iPhone 3G, believe it or not. We’d like 2019 to be the year that Apple finally pulls its socks up and offers better chargers as standard practice rather than expensive additions (but don’t hold your breath).

Design and display – How will the iPhone XR 2 look?

The iPhone XR is an attractive glass and metal smartphone with a 6.1-inch ‘Liquid Retina’ IPS display that ditches Apple’s pressure-sensitive 3D Touch technology in place of simpler haptic feedback.

In this regard, the XR 2 isn’t expected to be any different, with the same notched top edge accommodating the company’s TrueDepth camera system for Face ID and animoji/memoji support, as well as an 828 x 1792 resolution. 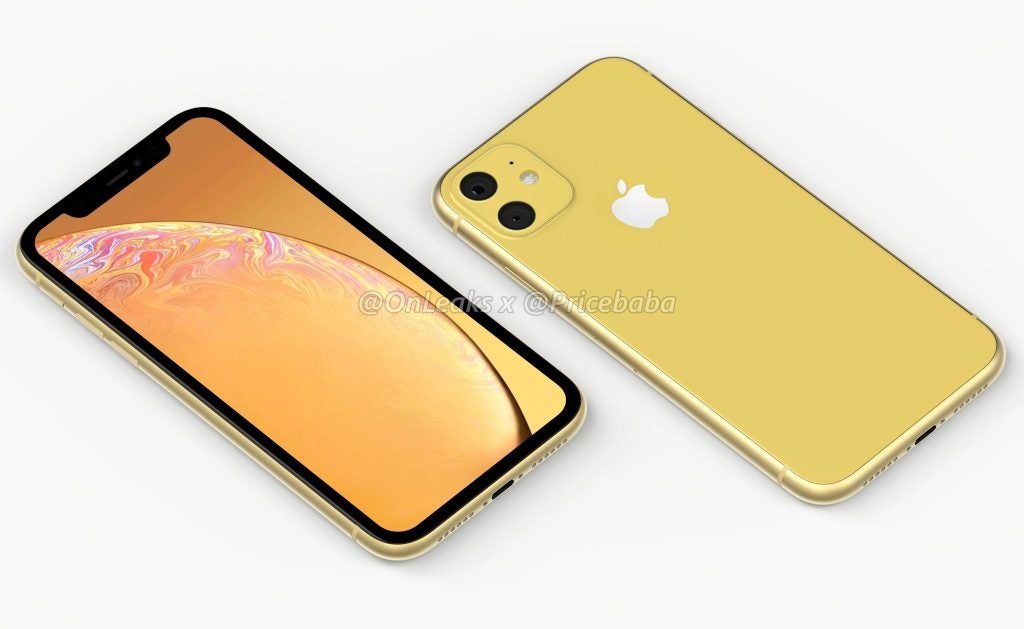 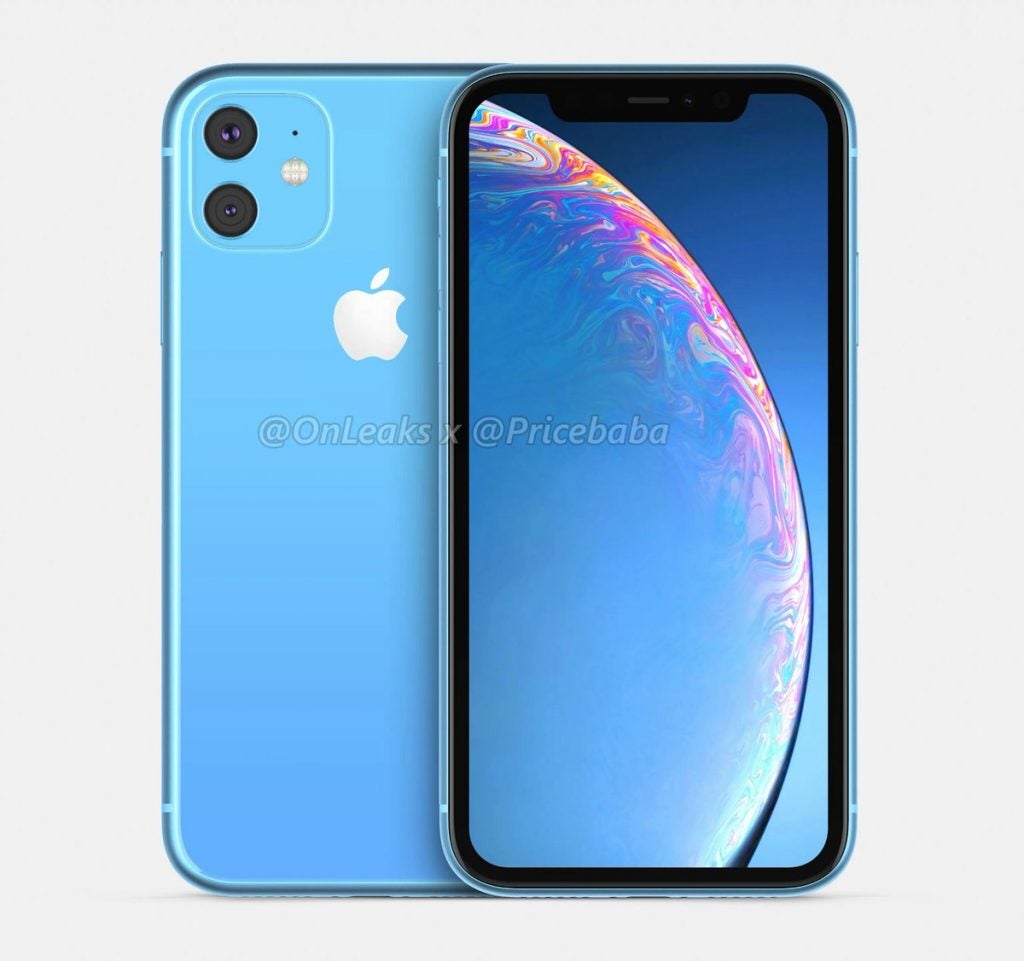 As for the design, the body remains similar for the most part but with a couple of key differences. The renders (above) were created in part by @OnLeaks) based on the images (below) of leaked phone case moulds, published by Bloomberg.

The iPhone XR 2 (along with the 11 and 11 Max) all seem to have similar profiles to their predecessors, but the most notable difference is a that large square camera arrangement, which will doubtless prove to be controversial among fans used to more sleek designs. Given that the XR 2 model has only two camera sensors rather than three, its bulky camera module is particularly noticeable.

The iPhone XR brought a long-absent burst of colour back into the iPhone portfolio, and the XR 2 will build on that legacy with the introduction of lavender and green to the range (according to Macotakara), at the cost of the XR’s blue and coral variants.

Camera – How many cameras will the iPhone XR 2 have?

There’s little information around on the iPhone XR 2’s camera specs so far. The new sensor is most likely to be a telephoto sensor, as that mirrors the dual camera currently found on the iPhone XS. The iPhone 11 will in turn get an additional ultra wide lens for extra versatility. These are positive steps, since the iPhone XR in particular lacks the versatility often found among its Android rivals despite its very strong overall camera performance.

If the 11 series makes use of OIS (optical image stabilisation) across multiple camera sensors, there’s a chance that the XR 2 might only employ the technology on its primary rear snapper – similarly to the iPhone X and 8 Plus respectively.