The iPhone X might have garnered a whole heap more hype when it hit shelves, but the iPhone 8 Plus is still a great phone. Just don’t come here expecting to be blown away. Instead, the iPhone 8 Plus represents a steady, safe update. There are nice upgrades to the screen, camera and processor, although nothing that will really make you say ‘wow’. It’s an iPhone 7S Plus in all but name.

The single biggest disappointment with the iPhone 8 Plus is its design. This is now the fourth time – iPhone 6, 6S, 7 and 8 – that Apple has stuck with the same design for its handsets. Considering it was easily the least attractive iPhone three years ago, it’s certainly fallen behind the Android pack now.

To be honest, the iPhone 8 Plus is comfortably my favourite iteration of the design, but that seems like faint praise at this stage. The aluminium rear has been replaced with a surface that Apple is calling the ‘most durable glass ever on an iPhone’ – and it feels so much better for it. It’s grippier, and doesn’t feel like it will fly out of my hand every time I pick it up.

It’s also fairly weighty – almost too heavy for me to use comfortably. At 202g, it’s 7g heavier than the already hulking Samsung Galaxy Note 8, and it makes the 150g LG V30 feel like a toy. Add a case, which I’m sure most people will, and that weight will only increase.

Apple has always been masterful at fit and finish, and the way the glass slightly curves at the edges and blends into the familiar 7000-series aluminium rim is super-impressive, despite the faint lip where the glass meets the metal.

Like the iPhone 7 before it, the device is IP67-rated for water-resistance too – something that’s become even more popular in the phone market of late. 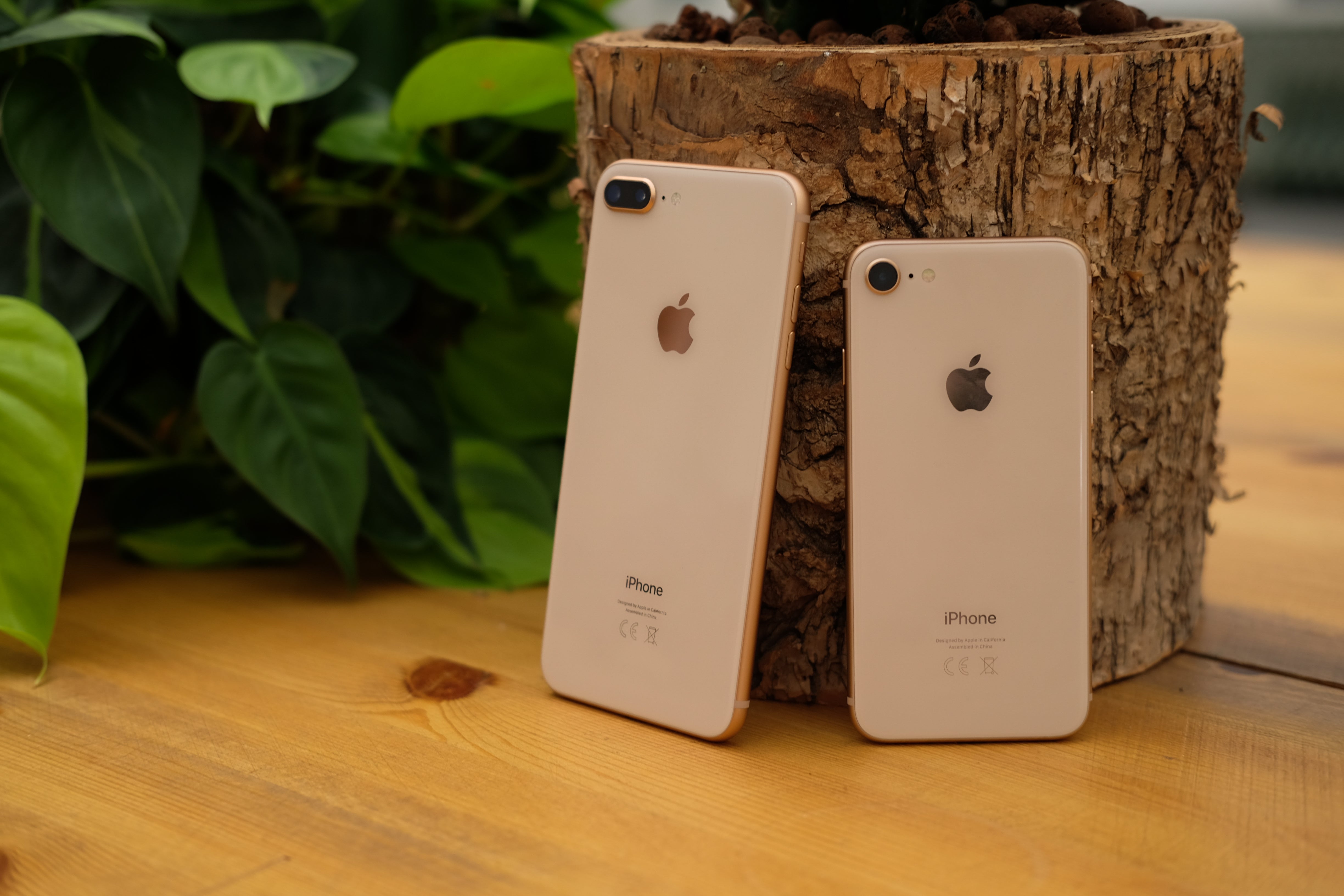 Apple remains the best in terms of the colour options it offers, and this is especially true of the new Gold hue. This could be one of the most controversial iPhone colours ever – but I’m a huge fan. It’s a blend of the lighter Rose Gold and the more harsh Gold of the iPhone 7, but the addition of the glass gives it a creamy, almost ’70s vibe that’s hard to get across in pictures. The iPhone 8 is available in the less interesting Silver option and Space Grey too.

The biggest problem with the ageing design of the iPhone 8 Plus is the sheer size of it. The 5.5-inch display used here is small compared to the 6.3-inch screen of the Samsung Galaxy Note 8 and the 6-inch panel on the LG V30, but the phone itself is far larger than both those models in every dimension. It’s cumbersome to hold, too wide and feels old-fashioned. It looks like a phone from 2014, and the huge bezel surrounding the display doesn’t help matters.

It’s clear that Apple is capable of designing a stunning phone – just look at the iPhone X – and I understand that the company will be pushing that as its future direction. But the iPhone 8 Plus isn’t cheap, it’s a £799 phone. It’s more expensive than the Samsung Galaxy S8, and it needs to compete.

The running theme of the iPhone 8 and iPhone 8 Plus is that they take the basics from the iPhone 7 and 7 Plus, but the individual components have been tweaked and fine-tuned.

Take the screen, for example. The iPhone 8 Plus has the same 1080p IPS LCD as last year’s handset, capable of displaying the wide DCI-P3 colour gamut. However, it now benefits from the True Tone tech that Apple first debuted on the iPad Pro 9.7-inch. True Tone alters the colour temperature of the display depending on the environment in which you’re in, reducing the harsh blue tones typical of an LCD when you’re in a softly lit room.

This may sound like a minor tweak, but the difference is significant, obviously so on switching back to an iPhone 7. To get a clear idea of the level at which True Tone alters the balance of the display, toggle it on and off in Settings – and shudder at just how blue the normal screen is.

As good as the True Tone implementation is, I’m annoyed that Apple didn’t opt for full OLED across the entire range. Instead, it’s only the iPhone X that gets the better saturation and near-perfect blacks that come with an OLED panel.

The iPhone X also has a much better contrast ratio (1,000,000:1 vs 1300:1) and offers ‘True HDR’. The iPhone 8 Plus can play back HDR (high dynamic range) movies from iTunes and content from Netflix, but they won’t look quite so rich and colourful. Still, watching the HDR version of Mad Max was an enjoyable experience, even on a 5.5-inch display.

I do prefer the better viewing angles and better outdoor performance afforded by LCD. I still get frustrated by the overly reflective nature of many OLED panels, but the LCD here is perfectly viewable.

For a look at the latest Apple phones, see our Best iPhones guide. Looking for something Google flavoured? Our list of Best Android phones will help.

Is the iPhone 8 Plus waterproof?

The iPhone 8 has an IP67 rating, meaning it is resistant to some, but not all, water.

When did the iPhone 8 Plus come out?

Does the iPhone 8 Plus support wireless charging?

How big is the iPhone 8 Plus?