If you're after the perfect all-rounder, then Zepp's latest wearable will disappoint. The Zepp Z is best reserved for those looking for a fashionable smartwatch that can provide quick access to notifications, and which will last for some time before requiring a charge. While it offers an improvement over the Zepp E Circle, it doesn't quite deliver on the promise of greatness to which its gorgeous design aspires.

A revitalised Zepp brand returns with its second mainline smartwatch in the Zepp Z, this time aiming at a more affluent crowd that enjoys a well-designed timepiece.

In a market dominated by hallmark names such as the Apple Watch and Fitbit fitness trackers, it’s rare these days to see a new brand throw its hat into the smartwatch ring – which is exactly the reason the brand caught my attention with the Zepp E Circle.

A futuristic device from a glance, the Zepp E Circle promised more than it could deliver, leaving me disappointed as a result. Still, Zepp – now owned by Huami – clearly hasn’t let the setback alter its plans, with the company releasing another new wearable in the form of the pricier Zepp Z.

With a €349 (roughly £314/$424) asking price, the Zepp Z’s spec sheet is certainly more robust than its predecessor. However, following several weeks of testing, I now have a definitive verdict on whether or not this smartwatch is worth the price tag.

Editor’s note: During testing of the Zepp Z, the OTA update appeared – adding Alexa voice support and expanding the list of tracked workouts. As a result, our verdict may differ from those that were delivered prior to the update’s arrival. 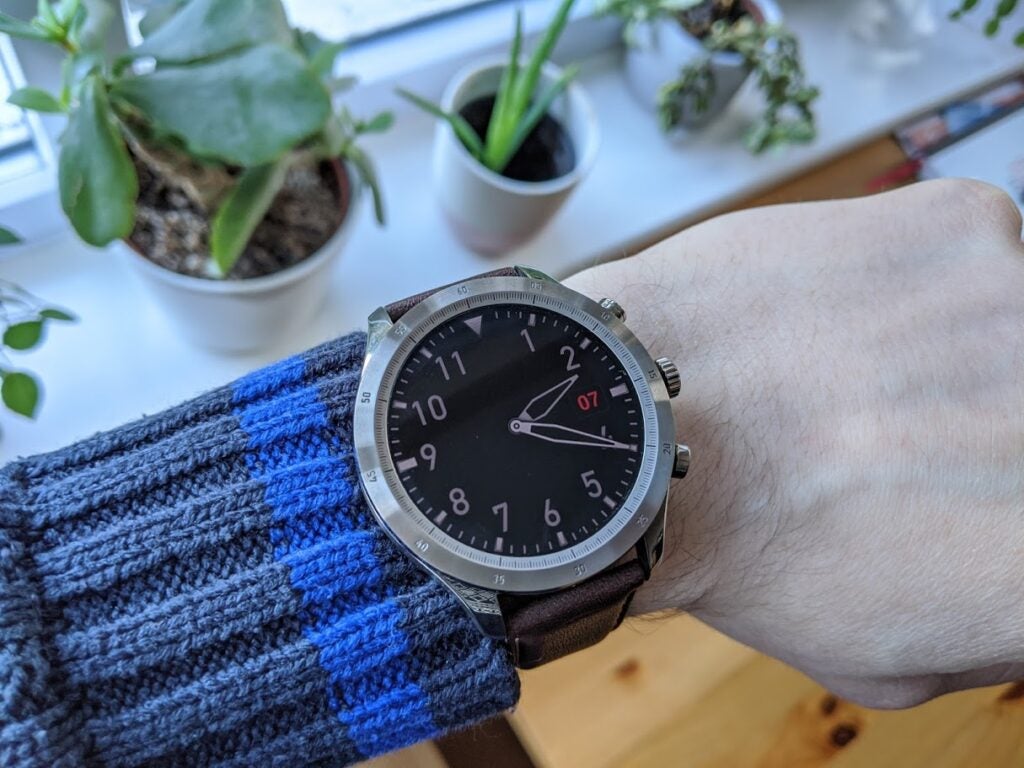 Here’s one thing you’ll be able gauge right away from the images accompanying this review – the Zepp Z is downright gorgeous. There’s only been a handful of smartwatches this year that have begged for my attention for everyday use, such as the more classically designed Withings ScanWatch, and I’m happy to add the Zepp Z to that collection.

The Zepp’s body comprises polished titanium alloy, which extends to the three buttons flanking the watch’s right-hand side; one of these is a rotating crown. Going the extra mile, the front-facing portion is etched with numbers and dashes to enable watch faces to leap beyond the confines of the screen.

Learning from its mistake of including a poor-quality watch strap with its first wearable, Zepp opts for a brown leather strap this time around, resulting in one of the best strap/body combinations I’ve seen recently. This is a watch that continually grabbed my attention at random points through the day, making me feel confident – just as a good watch should.

While I’m sure  there will be some who prefer the Zepp E’s near-buttonless, futuristic aesthetic, I find that the Zepp Z’s classic style is timeless for a reason, and far more attractive as a result. 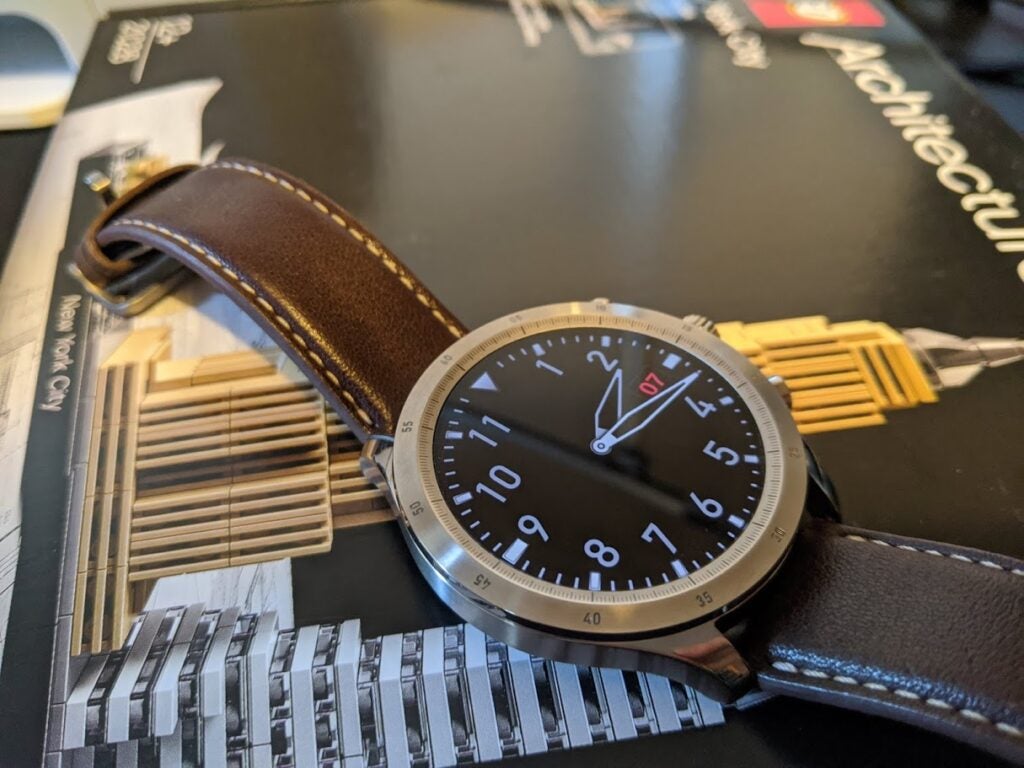 It’s worth pointing out that of the three buttons on the device, only two are used for navigating the UI. The uppermost button is touch-sensitive, and can be used to activate one of the Zepp Z’s health features, such as heart rate and SpO2 tracking. The button functions well for the most part, but as the watch itself states when you switch the feature on, it tends to go a bit haywire in humid environments such as the shower. So, if you want to avoid accidental touch registers, it’s best to keep the device on only when you need it.

Luckily for any Zepp Z adopters, the watch’s style doesn’t simply end with the physical build of the device; it continues as you switch it on. Much like the Zepp E before it, the Zepp Z boasts a bright AMOLED display, but this time it’s  larger at 1.39 inches and a 454×454 resolution.

As you might expect, these specs make for a fantastic experience. Text is extremely easy on the eyes, as are any charts or graphs for health tracking. However, the screen really comes alive with the watch faces included on the device.

In particular, the default watch face – which sports a navy-blue backdrop and silver watch hands – absolutely jumps off the screen, and the high brightness level ensures that the watch retains this level of quality outdoors, too. So far Zepp has a strong track record in this regard, and it might just well be setting the gold standard for other companies too. 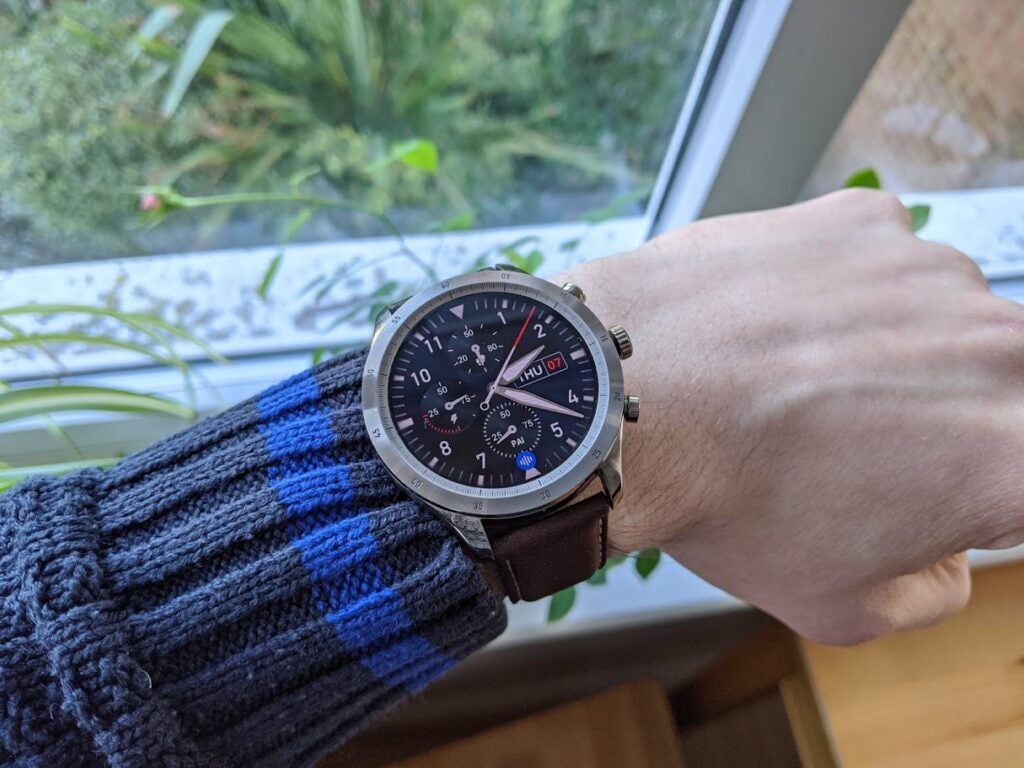 One of the biggest problems with the Zepp E was that, despite the watch’s fairly substantial asking price, it was fairly light on features. Without an app store to compete with Apple Watch and Wear OS devices, and few workout options to topple devices such as Fitbit, the Zepp E’s feature set was sorely lacking – something that Zepp has clearly attempted to fix with the Zepp Z.

Putting the “smart” in smartwatch, the Zepp Z now features Alexa integration, letting you activate the AI with a short touch of the crown and run through a whole bunch of commands with just your voice. Compared to my recent experience of Google Assistant on the TicWatch Pro 3, Alexa feels a tad slower here. Nevertheless, the software works – and it’s always a welcome feature, particularly for carrying out quick tasks such as setting a timer or an alarm.

Additionally, the Zepp Z also has a separate voice assistant that works offline, although the functionality is limited. There is some convenience to be had here – such as the ability to activate the ‘Do Not Disturb’ mode without touching the watch – but seemingly obvious commands such as being able to set a timer are nowhere to be seen. Adding only further irritation, activation of this feature can only be achieved by tilting the watch once it’s awake – and recognition of a tilt can be inconsistent.

Instead of jumping on the Wear OS bandwagon, Zepp has carved out its own operating system and UI for its smartwatches, and as was the case with the Zepp E, performance remains a mixed bag here. A few refinements have been made this time around, and I must say that the Zepp Z’s interface has a simplicity to it that’s easy to get to grips with. 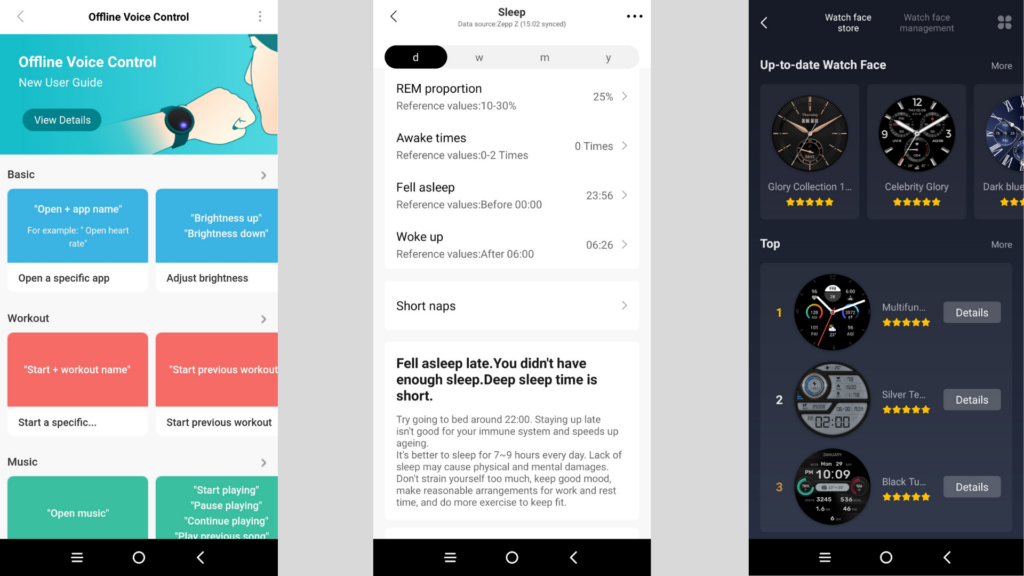 For example, on the home page, a simple swipe left or right will show you a key piece of information, whether that’s your current heart rate, workout statistics or even just the local weather. A swipe upwards reveals your notifications, and one downwards will display a control panel for battery modes, brightness and more. It all runs smoothly enough, but with no major apps – outside of the new Alexa integration – the Zepp experience still feels rather bare bones, and at serious odds with the high asking price of the device.

With the barrier for GPS tracking having been lowered with the superb £129 Fitbit Charge 4, I lamented the Zepp E for not including this feature for its £209 price, particularly given Zepp’s history as a company that caters to the needs of those who enjoy sport and regular exercise.

Luckily, GPS is included in the Zepp Z and I’m happy to report that it’s a largely efficient feature. Sure, on occasion the tracking did place my position ever so slightly out of bounds during several laps around my local park, but latching on to the signal only took around 20 seconds on average before I was good to go.

Since the OTA update, Zepp has added a greater number of workouts to the roster (there were just a few available at launch). While the experience is certainly more varied than it was with Zepp’s previous wearable, it seems strange that some popular workouts such as rowing failed to make the cut, but Jianzi kicking did. 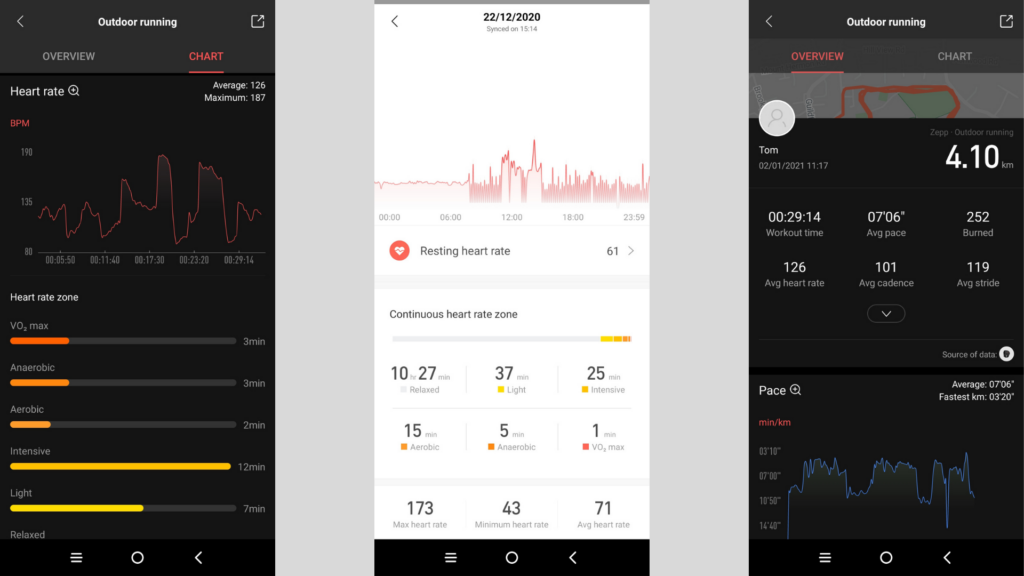 What’s even more disappointing is that no discernible improvements have been made to the Zepp Z’s heart rate tracking. The biggest problem seems to be that the Zepp Z can’t register BPM past a certain threshold. For example, a rowing session showed a high of 184BPM on the Myzone MZ-3 heart rate band, but the Zepp Z came up short with a high of 171, which then threw my average BPM rate completely out the window.

If you were hoping that the Zepp Z might deliver an efficient workout experience to accompany the well-designed chassis that houses it, then you’ll be sorely disappointed.

While the aforementioned fitness tracking is extremely disappointing, the Zepp Z’s battery life is anything but. Zepp claims a 15-day battery life for this latest device, and testing found this to be spot on.

Even with additional battery draining features such as stress tracking turned on, I still managed to get through 14-15 days before needing to hook up the Zepp Z to the nearest power outlet. At a time when it feels like I’m using my phone more than ever (and charging it more frequently as a result), it’s incredibly refreshing to not have to worry about treating a second device in the same way.

Should you buy the Zepp Z?

If there’s one thing that can be said for certain, the Zepp Z offers a definite improvement over the lacklustre Zepp E. This newer device happens to be one of the best-looking smartwatches around, with an aluminium chassis and brown leather watch strap that adds up to an unbeatable combination, aesthetically speaking. Factor in the two-week battery life and I have no doubt that the Zepp Z will find favour with a niche audience.

However, with very few features to write home about, and the fact that Zepp still has much work to do in the fitness tracking department, the Zepp Z just isn’t the easy recommendation that it wants to be.