It might not be the best Apple Watch in terms of features, but for most people the Apple Watch SE is the one you should buy. It retains all the vital tech (IP rating, GPS, sharp OLED) and ditches the ones that make the most sense.

Apple Watch SE is Apple’s first attempt at a cheaper wearable and it’s just about an all-round success. For most people, there isn’t any need to look beyond this.

Instead of offering a cheaper new product, Apple tends to just reduce the price of its previous-gen flagship. And while you can still pick up the Apple Watch Series 3, if you’re upgrading from an older model or looking for your first Apple wearable then you should seriously consider the Watch SE.

Design and screen – This is the Apple Watch we all know

The Apple Watch SE picks up the design Apple adopted with the Series 4 and continues to use with the Series 6. That means it comes in two sizes (40mm and 44mm) and has a bigger display than that of the Series 3. You do miss out on the various, often high-end, materials and the new colour options introduced this year however. If you want a more customisable watch then go for the Series 6, but if you’re happy with the basic design then you’ll be fine with the SE.

You can of course customise the SE with straps. This has the same strap mechanism as any previous Apple Watch, so you’ve got a load of options to choose from. I’ve been using it with one of the new braided Solo Loops bands which are lovely, if a little pricey.

Apple Watch SE remains a great looking smartwatch, though if you prefer your smartwatches to look like, well, watches then you might want to look at something like the Huawei Watch GT 2 Pro or Samsung Galaxy Watch 3.This still looks a little like a mini-computer taped to your wrist and it’s not a look for everyone. For me, this is how a smartwatch should look and I much prefer it to those trying to emulate a traditional analogue timepiece. 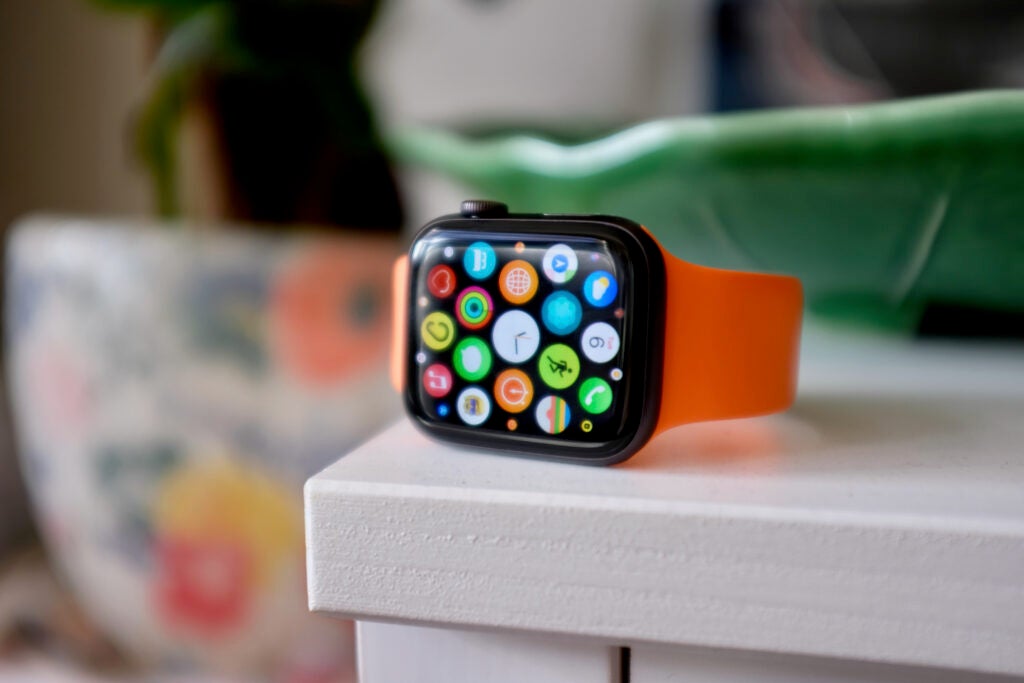 Even though the SE is a cheaper model where price is concerned, it still feels high-end. It’s built supremely well, with a fantastic haptic engine for subtle nudges on your wrist and the delightful Digital Crown for navigation. There’s another button above (or below, depending on how you orientate the watch) the crown that can quickly bring up Apple Pay and cycle through open apps.

A big difference between this and the Apple Watch Series 3 (the brand’s current ‘budget’ option) is the display. While the 3 has a chunky bezel and a smaller panel, the SE has a panel that covers a lot more of the front. It’s a great screen: very bright, perfectly dark blacks thanks to the OLED tech, crisp details and it’s oh so responsive. It doesn’t, however, pack the always-on tech that ensures something is on the screen all the time. This means you’ll have to flick the watch up to see the time and it’s not always glanceable. If you want this feature then opt for the Series 6.

While I like the always-on display, it’s a feature that feels ideal to cut as it’s far from vital. Force Touch has been ditched here too, however this has been cut from all models and the software itself.

The SE doesn’t feature an ECG monitor or the new health sensors used to measure blood oxygen that debuted in the Apple Watch 6. Outside of that it ticks most of the right boxes for fitness tracking. It’s got GPS, is water-resistant for swimming and packs an accelerometer for detecting if you suddenly fall over.

Certain features are all always going to be cut and the ones missed here make sense – even if the benefits of the ECG and heart monitoring can be vitally important. Hopefully, that’s one sensor the next SE model can pick up.

The Apple Watch remains the finest smartwatch solution for actually keeping you active. The idea of filling ‘your rings’ each day through a combination of movement, steps and standing has been copied by many but never superseded. There’s a huge amount of workout options offered here too, and the whole UI makes it easy to get into either a run, outdoor walk or whatever takes your fancy.

Automatic tracking is offered, however I am yet to be confident in its ability. If you do HIIT workouts, you’ll likely want to enable them manually. The same goes for extended walks – the watch will occasionally pick them up, just not that reliably. 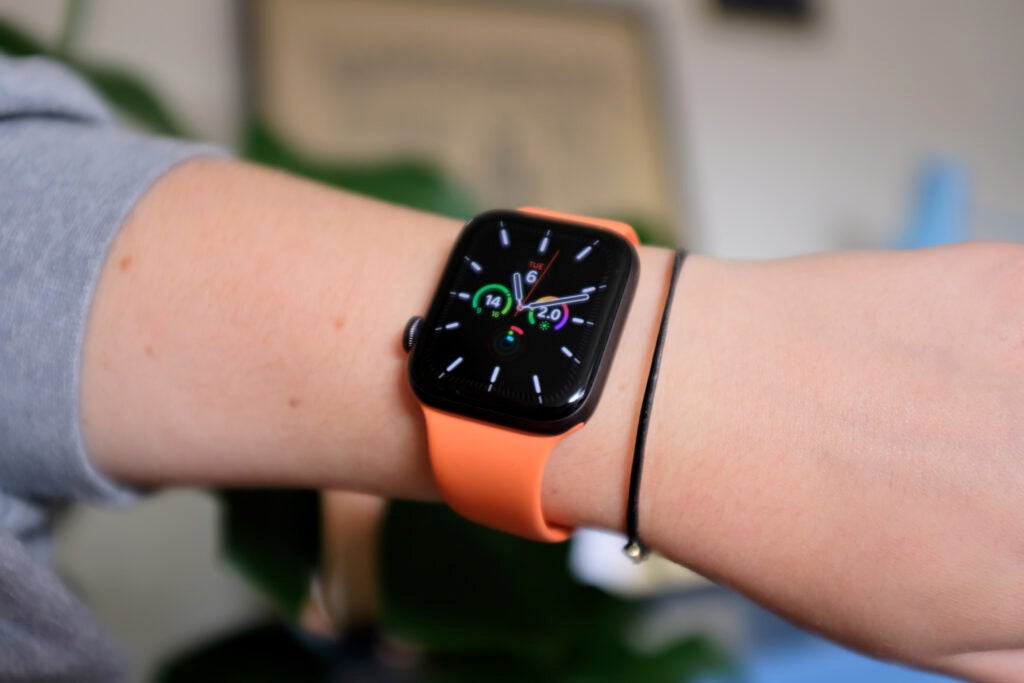 Fall detection was a headline feature a few years ago and remains one of the most useful additions here. The watch can tell, thanks to the accurate accelerometer, if you take a strong tumble and then ring out to either set contacts or emergency services. It’s impossible to test out as even when I try to simulate a fall nothing happens, but that’s more down to the strength of the fall as opposed to the system not working.

In terms of tracking, the Apple Watch SE is accurate and matches results from other Apple Watches. You’re not losing out here by plumping for a cheaper model. The GPS is reliable and accurate, locking onto my location and tracking my runs without issue. As there is GPS built-in, you can leave your phone at home and run without it.

The heart rate monitor (HRM) is always running, taking your heart rate throughout the day and night. Certain watch faces give you a constant view of your heart rate, otherwise it’s always available in the dedicated app or on your phone. I’ve compared the Apple Watch SE to other versions along with a number of competing wearables I’d say have good HRM accuracy, and the SE impresses.

With its latest update, Apple has finally added rudimentary sleep tracking to the Watch and it’s available on the SE. This has been a long-missing string in the bow of the Apple Watch and it’s great to have.

Sleep tracking on the Watch SE isn’t as complete as you’ll find on some competition, especially from the likes of Fitbit, and it doesn’t monitor various types of sleep (deep, light etc). However, it does give you an easy to digest overview of your slumber both on the Watch and in the Health app on your iPhone. You can see your average time in bed, average time asleep and there’s a handy wake up timer that’ll buzz your wrist in the morning.

WatchOS is the pinnacle when it comes to smartwatch software. From the varied and superbly designed faces, to the wealth of apps and services, there isn’t another wearable out there that feels this good to use.

There are a number of new watch faces this year and developers can build multiple complications (those little bits of information that are always visible) into a single face for the first time. Still, you won’t find downloadable third-party faces on the store which remains a shame for those wanting something a little more unique.

The faces you do have are customisable though. Some focus on cramming as much information in as possible, while others focus on design and simplicity. You can easily change face with a swipe and manage them all on your phone. I’ve got a soft spot for the Memoji faces that change expressions as you tap.

Another new software trick that arrived with watchOS 7 is hand washing reminders. The watch can tell when you’re washing your hands, through a combination of your hand movement and the sound of water, and give you a countdown timer. This does work surprisingly well, though it became obvious to me that most Apple Watch designers must have a dishwasher as every time I did the washing up the countdown timer started.

There’s Apple Pay for contactless payments, a new Family Setup feature that’ll get your kids’ set up without requiring a separate phone and a load of apps available from the App Store. If you’re an Apple Music subscriber you can download music to the internal storage of the Apple Watch SE but there’s no option to do this with apps like Spotify. The only real downside is that Siri still remains limited as a digital assistant when compared to the Google Assistant.

Performance is excellent too and if you’re coming from an early Apple Watch then you’ll notice how well the S5 chip zips along. 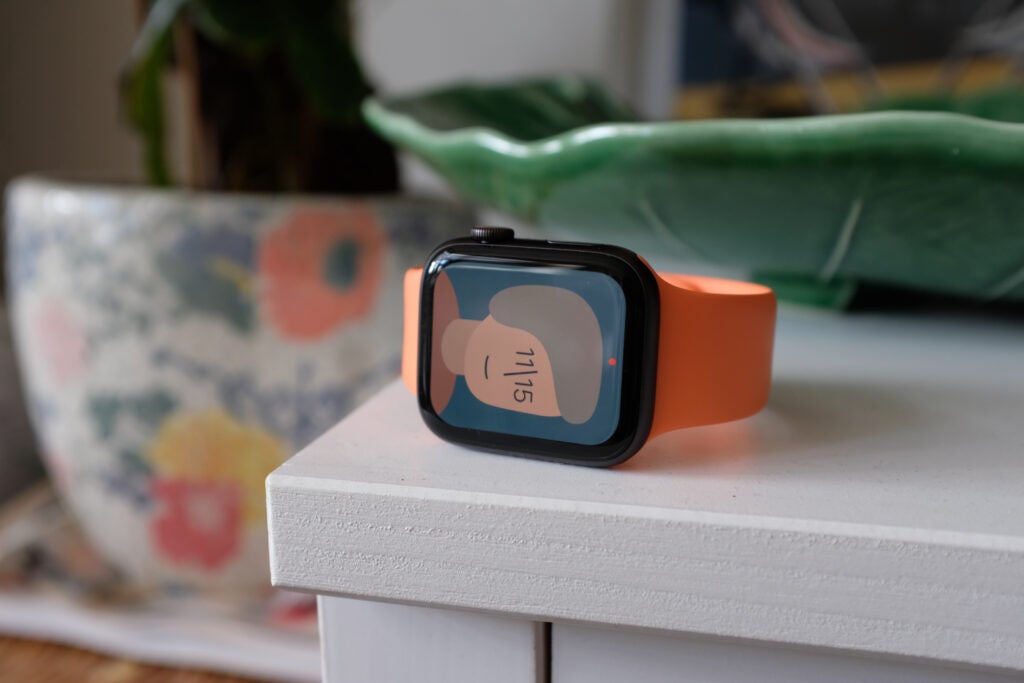 Battery life – It’ll get you through the day (and night), but you’ll want to keep a charger handy

With the addition of sleep tracking, many were expecting the new range of Apple Watch to come with improved battery life. That hasn’t come to pass, and you’re still expected to charge the wearable everyday – whether that’s overnight or in the morning.

My usual regime is to wear the watch all day and then at night to utilise the sleep tracking, charging it first thing in the morning. I did notice that if the day included a particularly long run, or lots of GPS use, it would drop below the required 30% needed for the sleep tracking.

The battery life is fine. If you’re coming from a previous Apple Watch then it’s very much the same and it’s similar to the endurance of Samsung’s latest wearable. If you’re upgrading from something like a Fitbit that usually lasts a number of days then you’ll need to adjust.

The method of charging will be familiar to any Apple Watch user, too. You get a magnetic puck in the box (don’t expect a plug) that attaches to the bottom of the watch. A full charge takes over an hour and, annoyingly, you can’t use other wireless solutions like Qi. This feels like an obvious missing feature.

Should you buy the Apple Watch SE?

If you’re an iPhone user after a smartwatch then there isn’t really another choice you should consider, unless you’re after a far more in-depth running watch in which case we’d recommend a Garmin. Fitbits might offer better sleep tracking, but the OS isn’t anywhere near as mature and Android Wear is very limited on iOS.

It might not be the best Apple Watch in terms of features, but for most people the Apple Watch SE is the one you should buy. It retains all the vital tech (IP rating, GPS, sharp OLED) and makes the necessary cuts without feeling compromised.