What is the MyZone MZ-3?

Not everyone is at the same fitness level, so it’s unfair to compare the effort of an Olympic rower with someone who’s never set foot near a set of oars. The MyZone MZ-3 is a chest-worn heart rate monitor (HRM) that levels the playing field by rewarding you based on your personalised effort levels. This makes it a solid choice for everyone from fitness newbies to seasoned pros.

The MZ-3 resembles pretty much every chest-worn heart rate monitor around. As devices that are worn under clothing, they don’t receive a lot of radical design treatment.

It consists of a red elasticated band that the MZ-3 tracker clips into. Like other HRMs, the monitor itself detaches so you can wash the band when it becomes grubby after sweaty workouts. There’s also a spot where you can write your name so that you don’t end up wearing someone else’s strap. The size-adjustable band simply hooks into place once you’ve extended it around your chest, with the sensor designed to sit across your sternum. 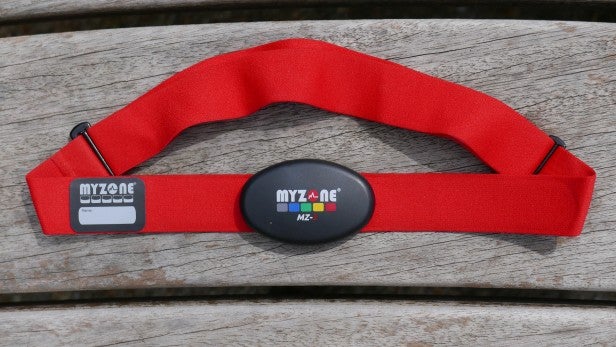 Wearing the MZ-3 while running, you definitely know you’re wearing it, but it stays in place well. However, if you’re more involved in resistance and free weights training, I found the band would occasionally slide down my torso over time, which meant I needed to readjust.

The sensor itself fixes on to the band with two snap fasteners, which aren’t always the most secure if you do need to adjust the position. I kept accidentally popping the monitor off at first, which was particularly annoying if I was wearing a base layer, as it was more difficult to reattach. Once I trained myself to grab the elastic and not the sensor it became less of an issue. 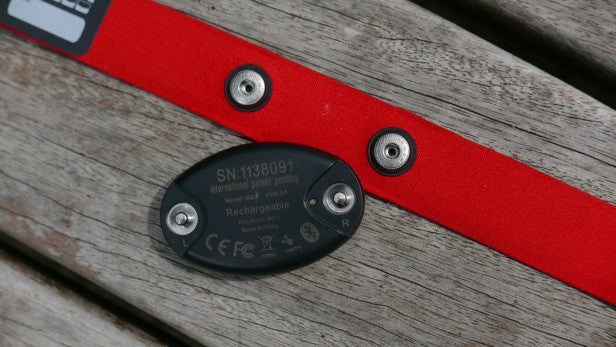 The oval-shaped MZ-3 monitor is wider than the HRM included with the Under Armour Healthbox, but is around the same thickness. If you tend to wear tight-fitting tops to train, it’s certainly going to be noticeable.

The unit’s made from plastic, which feels a little cheap, but it did survive a few knocks during barbell bench press, and it’s also sat in the bottom of my gym bag without any issues. You charge it using a proprietary charger that clips on and charges through USB. With battery life rated at around seven months you won’t need it often at least.

The back of the chest strap is where the sensors are located. The MZ-3 will only turn on when it detects skin contact across the sensors, which means it doesn’t drain its battery when not worn. You get a single beeping sound when the sensor turns on and three beeps when it turns off.

However, in a noisy environment, such as a gym changing room or outdoors, it’s difficult to hear the beeps, so there were times when I wasn’t entirely sure it was tracking. I also found that the monitor wouldn’t always reliably beep to signal it was on if I attached the sensors straight to my chest. Instead, I found manually triggering the MZ-3 by holding the sensors in my hand until I heard the beeps proved much more reliable. 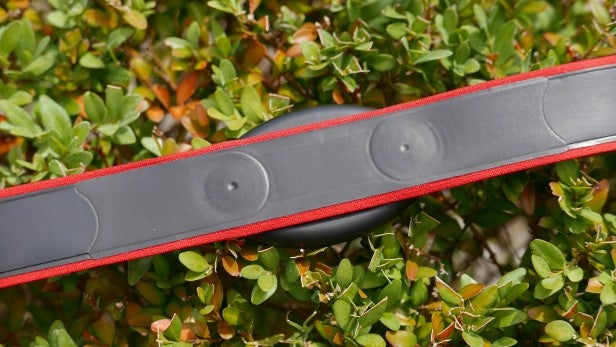 There were also occasional pairing problems with the companion app where it wouldn’t detect the sensor. Thankfully, even during times when I wasn’t sure the sensors were working, it always did track my workouts using the built-in storage. I was then able to sync the data afterwards. Still, some sort of visual indicator to say it’s on would have been welcome. Especially considering there’s a small LED to indicate charging.

The MZ-3 tracks your heart rate, compares this against your measured maximum heart rate, and then assigns you MEPs (MyZone Effort Points), which are based on your percentage heart rate zone. The idea is that the harder and longer you push yourself, the more MEPs you’ll accrue. This plays into the social and competitive element of the MyZone platform, which has leaderboards.

You can follow any of your friends and family who are also using an MZ-3. You’re able to comment and ‘like’ other people’s activities, which is a good motivator. If you’re using the MZ-3 in a participating gym or fitness club, you can have everyone’s live data displayed on a screen so you can instantly see how you compare. It provides a level of public accountability that could mean you’re less likely to slack at the back of your next spin class. 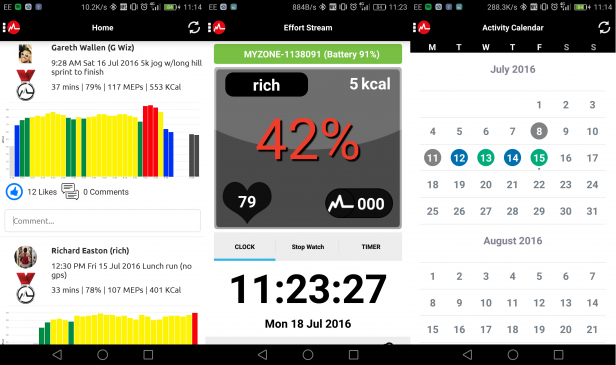 Using the Effort Stream aspect of the app, you can also get this live data on your smartphone or tablet. A live tile interface provides at-a-glance information. It can then be used both for your live effort level and heart rate, but also as a means to track your recovery. If you’re a weight trainer, it’s a handy guide to know when you’re best prepared for your next set, which is how I often used it.

As the MZ-3 tracks your heart rate, rather than movement or steps, it can be pretty much worn and applied to any sport – even swimming, as it’s waterproof to 50m. I’m an awful swimmer, so it felt good to be suitably rewarded for how hard I had to push myself just to swim a lap.

The MyZone app can feel a little messy at times. It’s mildly annoying to have to manually refresh individual pages, such as the activity calendar, to get it to show the latest workouts even after they’ve been synced. Then there are sections for body shots and food logs, but both are rudimentary areas for you to just save photos. 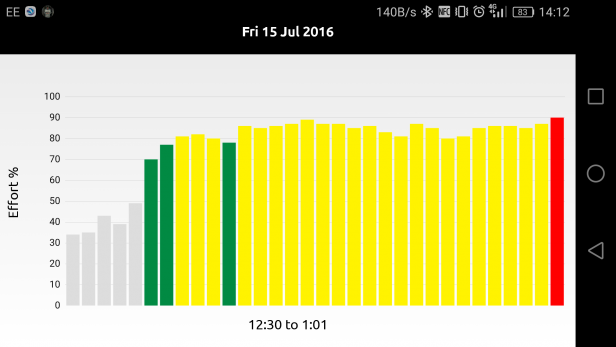 The MZ-3 sensor is ANT+ compatible, meaning it works with other apps, such as Strava or MapMyFitness, so you can provide heart rate data to those apps to go alongside the GPS when running or cycling. The MZ-3 will still output the relevant MEPs to its own app simultaneously. As there’s built-in storage, there’s no need to have the sensor paired with a device when working out.

As for its heart-rate-monitoring accuracy, MyZone rate it as 99.4% as accurate as an EKG (electrocardiogram). Compared to other chest-worn heart rate sensors and my own knowledge of my fitness, the readouts were precisely what I expected.

Whether conducting High Intensity Interval Training (HIIT) or slowly building up to one-rep maximum deadlifts, the peaks and troughs of the MZ-3’s bar graphs were spot on. Readouts were certainly far more accurate than optical heart rate sensors found on wrist-worn devices, which is a worthy sacrifice for the less comfortable experience if you care about the accuracy of the data.

Should I buy the MyZone MZ-3?

If you need a helping hand in getting motivated, as well as an accurate gauge of how hard you’re pushing yourself, the MyZone MZ-3 gets my recommendation. The gamified points system is a surprisingly good incentive, too. It’s also great if you want to train more intelligently.

The MZ-3 is becoming a popular tool distributed by fitness centres. So if you’re considering a gym or fitness centre that uses it in its classes, that’s an excellent selling point and sure to make classes more fun and engaging.

Related: Tech has made personal trainers redundant – here’s why

The MZ-3 ultimately loses a few points for its spotty pairing and user experience. The MZ-3 is also perhaps a little expensive for what is essentially a heart rate monitor, but altogether it’s an excellent package.

The MZ-3 takes your heart rate data and uses it to make fitness fun.