If the Zepp E came in at a far cheaper price, it could make for a solid recommendation. The watch's AMOLED display is among the best I've seen on a wearable, and the battery goes a long way to boot. But the lack of built-in GPS, NFC, strength training and a proper app store just flies in the face of its absurd RRP.

Undergoing something of a rebrand, Zepp has released the new Zepp E smartwatch with a fitness first approach and a bespoke operating system.

For some time now, Zepp has been manufacturing a particular type of fitness tracker – ones aimed specifically at monitoring various sports. From tennis to football, baseball to golf, Zepp has had its sights set on a very particular niche – until now.

With the Zepp E smartwatch, Zepp is making its foray into a market dominated by the likes of Apple, Google and Fossil. Boasting a different set of expertise however, the Zepp E smartwatch has the potential to offer up a fresh take on what a smartwatch could be in 2020. After some rigorous testing, here’s our final verdict.

Design – the obvious elephant in the room

Despite branching off in its own direction where software is concerned, the Zepp E has taken some considerable inspiration from other smartwatches on the design front. I say inspiration in the loosest of terms because the square and circular variants of the Zepp E look almost identical to the Apple Watch 5 and Samsung Galaxy Active Watch 2 respectively. 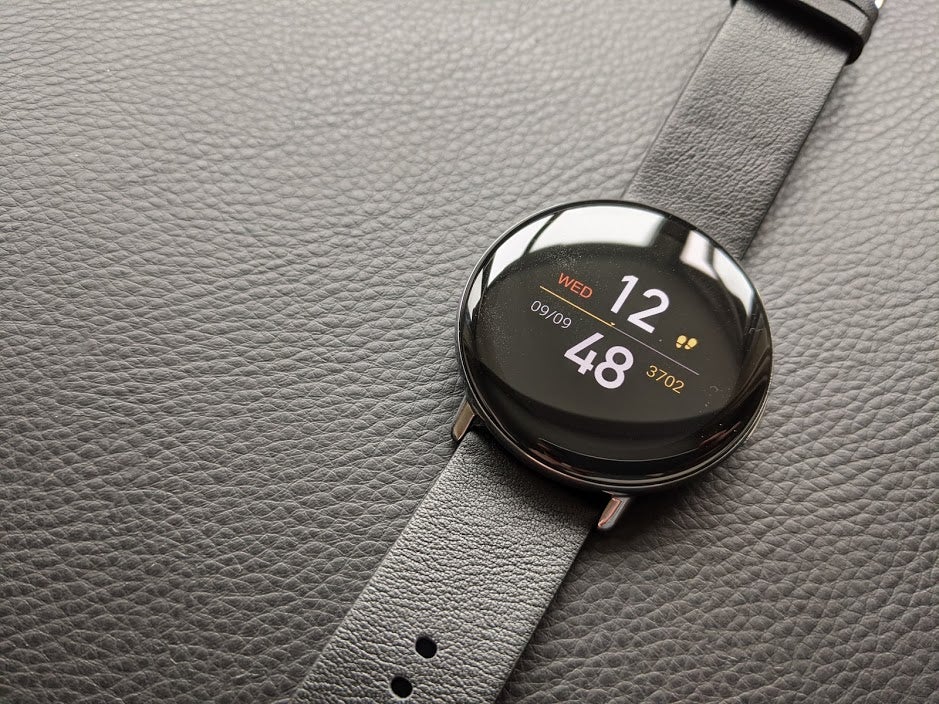 Admittedly, things are a little less egregious with the circular variant – our review model. One of the best things about the Active Watch 2 was its curved bezels, which allowed the screen to feel larger as the unused space pooled over the edges. It’s great to see another company take a stab at this, as it certainly feels more futuristic than a traditional barrier, found on the likes of the TicWatch Pro 2020.

The square option on the other hand just seems like an attempt to cash in on the association with the Apple Watch, but at a lower price point as a means of luring people in. By no means should Apple have an absolute monopoly on the square aesthetic, but if you’re going to take on a widely recognised brand, you should have something substantial under the hood to go with it (more on that later).

Both models boast a stainless steel chassis, which might not be to everyone’s tastes but I enjoy a splash of silver, particularly in contrast with the deep blacks of the Zepp E’s bezels.

There’s a single physical button located on the right hand side that can wake the watch, take you to the main menu and then back to the watch face again. By default, a long press will take you to the list of available workouts, but this can be customised to open a whole range of features. 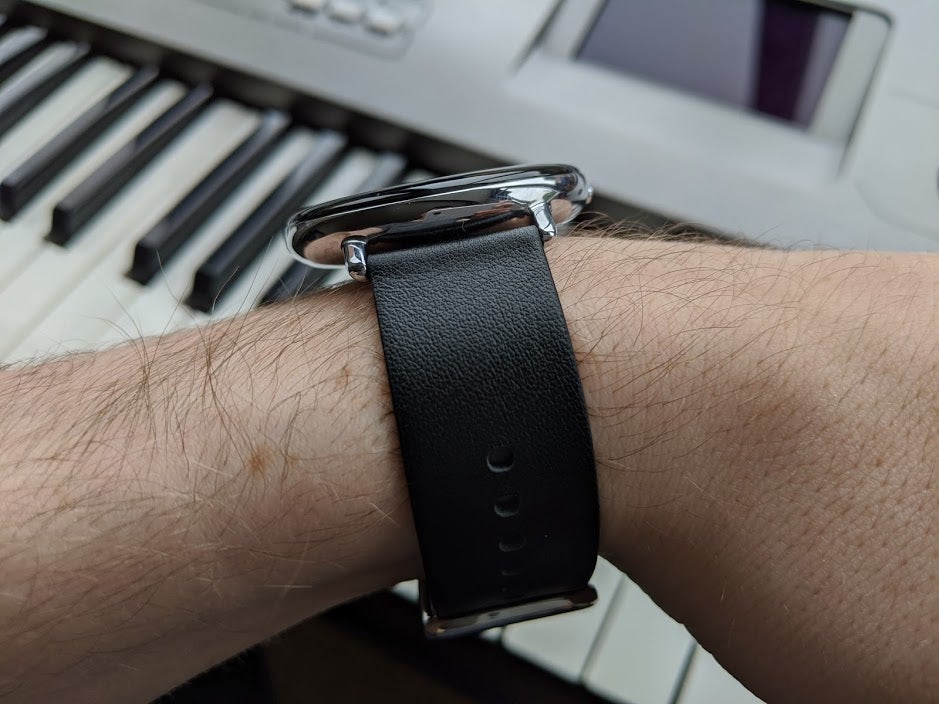 Although it’s hard to gauge from the pictures included, the default leather strap provided with the Zepp E is probably the worst watch strap I’ve ever come across. Not only is the strap incredibly small, but it’s uncomfortable to wear and feels flimsy. Suffice it to say, the strap didn’t last 10 minutes on my wrist before I swapped it out for a spare silicone one I had lying around.

While the aforementioned watch strap feels cheap and out of place, the Zepp E’s gorgeous AMOLED screen is anything but. On the circular model, the 1.28″ screen utilises a 416×416 resolution and 326ppi.

Within just a few minutes of using the watch, it became clear that a lot of attention had been paid to the display. Every available watch face pops on the Zepp E Circle’s screen, with an impressive level of brightness that made some of the other smartwatches in my collection feel ancient.

The best part is that if you’re using any of the watch faces that utilise a black background, it’s almost impossible to notice the screen’s bezels. I know that some people might prefer the traditional walled screens on other smartwatches, but the curved display on the Zepp E is undeniably futuristic, and I’d love to see this expanded upon. 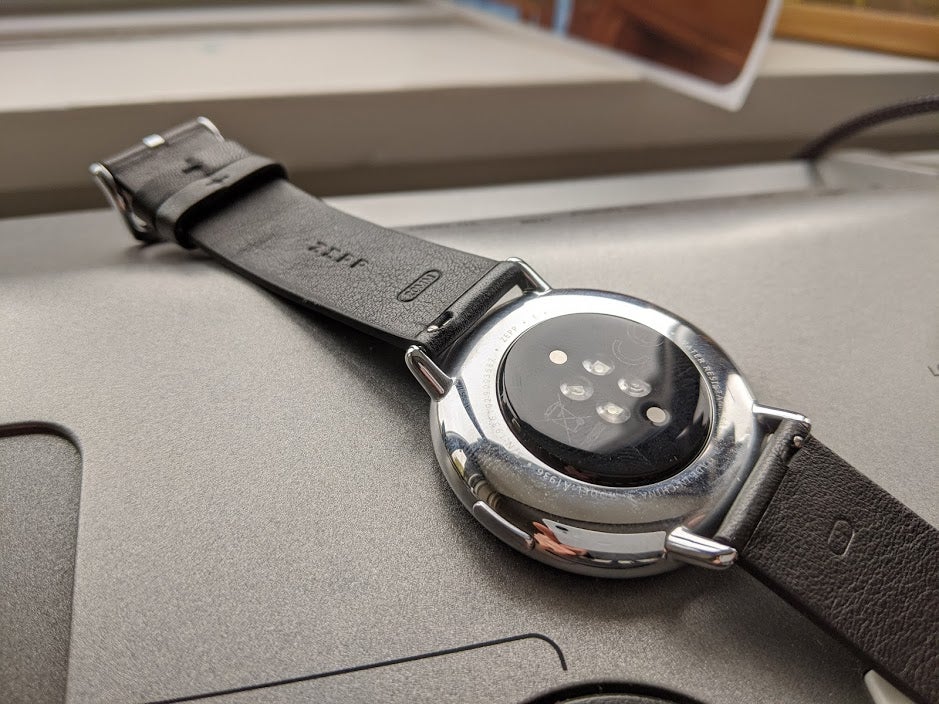 Features and performance – works quickly but with very little to do

It’s understandable that with its own bespoke operating system, the Zepp E would have some catching up to do with app compatibility. After all, Wear OS and WatchOS have been around for years, and work with a bunch of well-known services such as Uber, Google Maps and more. You can imagine my surprise however when I came to realise that there is no app store whatsoever for the Zepp E smartwatch.

There are a few basic applications built-in, such as the ability to check the weather, control your music playback and set reminders for the day ahead. These are still useful things to have on a smartwatch, but with no NFC, smart assistant or built-in GPS tracking, and an asking price of £209, I’m not quite sure who the Zepp E is aimed at.

It’s not all bad news however, as the Zepp E app does contain a decent watch face store. With dozens of free watch faces available across a varied collection of styles, there’s almost certainly something for everyone. I only wish that some of the Apple inspired watch faces were animated in the way you’d expect them to be. Seeing a gorgeous 3D flower remain static just feels wildly out of place in 2020.

In everyday use, the Zepp E is a blast to wear. Even though there aren’t too many features to jump between, interactions with the watch feel every bit as fluid and responsive as you’d hope them to be. I never encountered any slowdown either, which is a lot more than I can say for some Wear OS smartwatches. 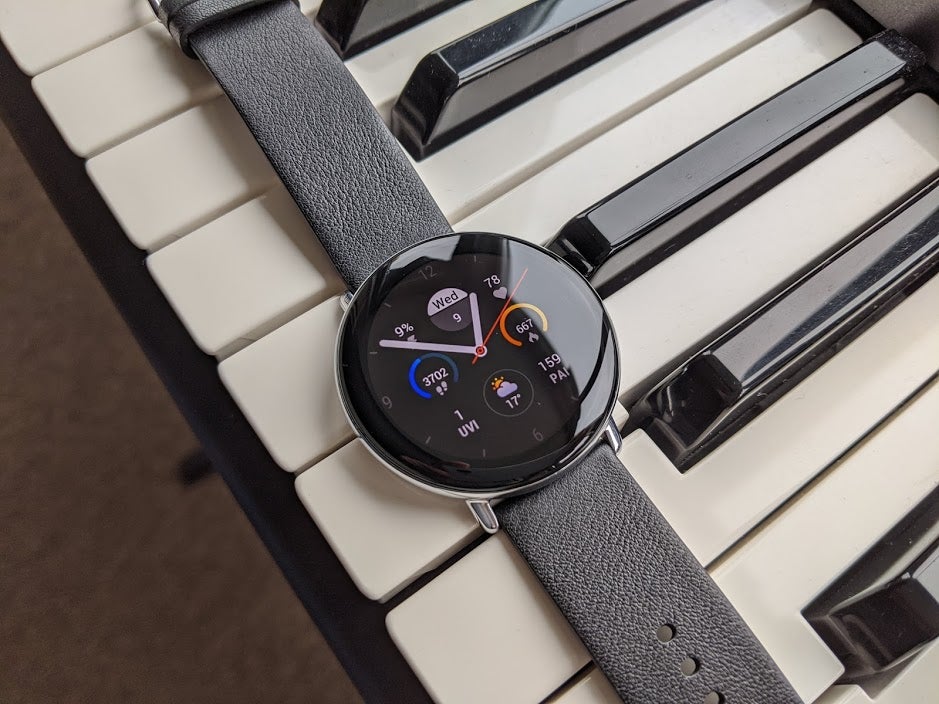 Fitness tracking – lots of bells and whistles but not enough options

Starting with the good, the Zepp E has a fairly competent heart rate monitor built-in. Wearing the watch alongside the Myzone MZ-3 heart rate strap, the two devices were largely in tandem with their results. I did pick up the occasional discrepancy with the average heart rate of a workout, but the peak heart rate was largely found to be the same across both devices.

All of your stats are regularly synced up with the new Zepp app (previously Amazfit). Similar to the move points calculated on Google Fit, Zepp uses a different score based system known as PAI. Based on scientific research, PAI calculates your activity over the last seven days to provide a score that also takes into account your age and fitness level. It’s a handy system, as it understands the need for rest days in relation to the effort you’ve been putting in.

The Zepp app also stores your sleep statistics, providing an immediate sleep score out of 100, and further details beyond that to know why a particular night’s sleep was effective or ineffective. 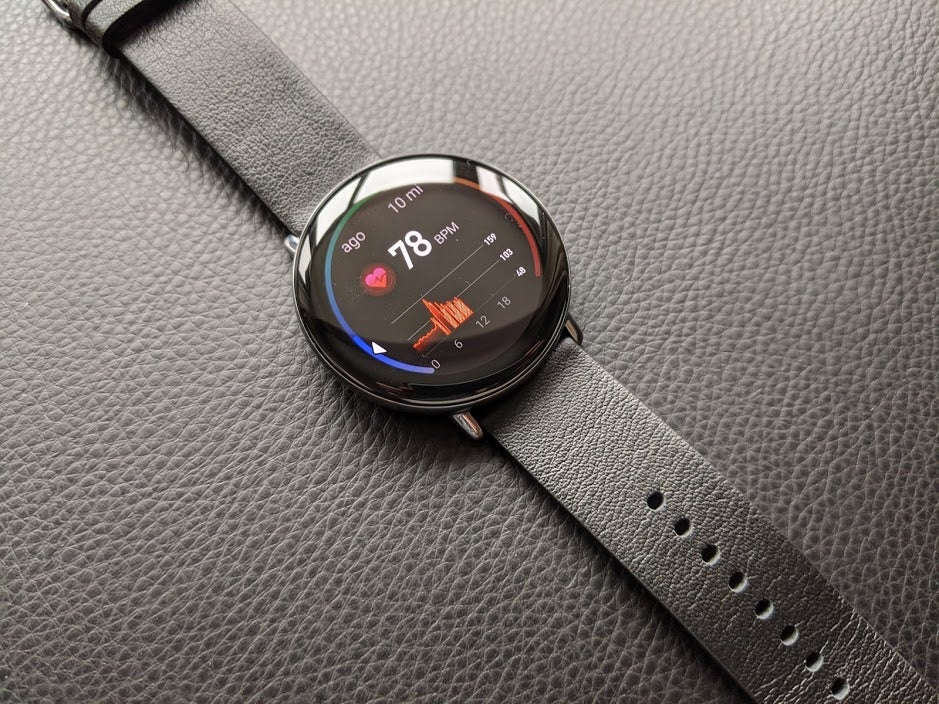 So far, so good – right? The problem is that despite its solid groundwork, the Zepp E has some serious holes in its infrastructure that undermine its better qualities. For starters, there’s no built-in GPS to be found here, which is almost unheard of these days for a smartwatch costing more than £200.

Similarly, there’s only a handful of different exercises available, and the majority of them are cardio based. I enjoy a good run as much as the next person, but as someone who also brings strength training into their regular routine, the Zepp E smartwatch left me high and dry.

The Zepp E Circle also has a significantly hard time with calculating distance. In some cases, a tracked run would be nearly several kilometres shorter than what had actually taken place. Given the expertise Zepp is supposedly carrying with it, I’m quite surprised that the Zepp E smartwatch is so lacklustre in this regard.

Battery – not quite a week, but close enough

It probably says a lot about the state of smartwatches that one of the most appealing aspects of the Zepp E’s spec sheet was its claim of a seven day battery life. After some testing, I’m sorry to report that those claims didn’t quite match up, but the Zepp E can chug along for quite some time. 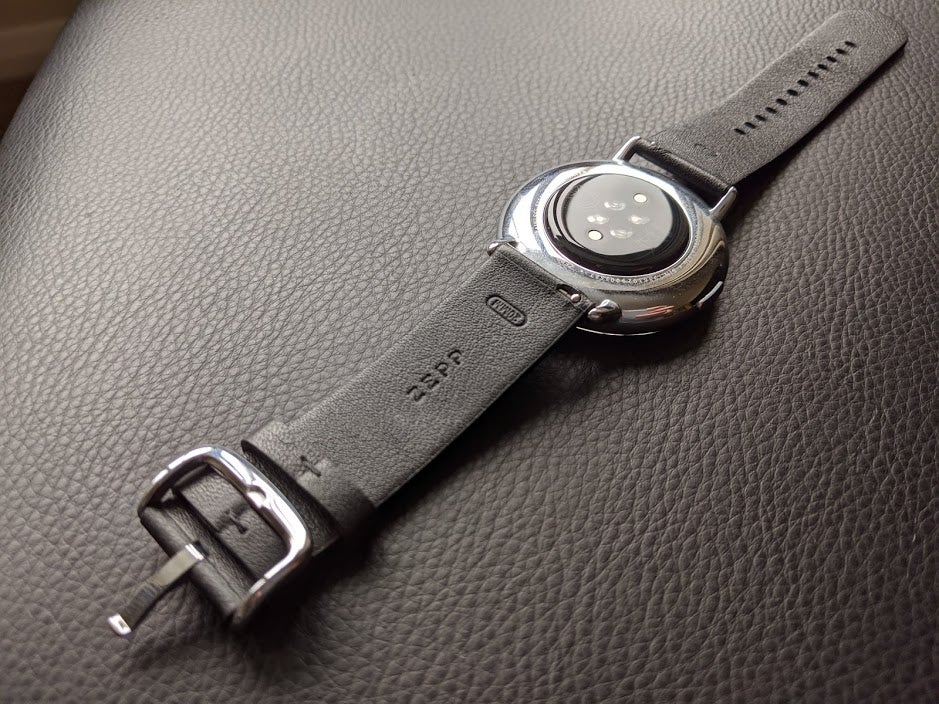 With 24-hour use, notifications and several workouts tracked, I was able to get just over six days worth of use out of the Zepp E Circle. That’s really impressive for a smartwatch, especially one that has a screen as bright as the Zepp E’s.

Toggling the always-on screen and upping the workout duration saw a shortened battery life of around four days, which is still better than most. Charging the Zepp E is also a fairly painless experience, reaching a full tank of gas in roughly an hour’s time.

Should you buy the Zepp E?

There’s no denying that there are some things the Zepp E absolutely nails. The bright AMOLED screen is one of the best I’ve ever seen on a smartwatch, and the long battery life can get you through almost a week on a single charge. But these features simply aren’t enough to warrant purchase all on their own.

With an RRP of £209, the Zepp E should be a lot more capable than it currently is. The lack of in-built GPS and NFC stings, as does the incredibly small list of workouts that can be tracked. Plus, with its own operating system, there isn’t a robust app store of any kind to help you make the most out of the device. If the Zepp E had been priced at a more affordable rate, it could’ve been a winner, but for now it’s simply not worth the price it’s going for.