The Fitbit Sense has definitely impressed us so far, with the new EDA sensor, improved battery life and built-in GPS making a good case for upgrading. With a greater emphasis placed on using Fitbit Premium with the new wearable, there’s still a lot more ground to cover before our final verdict but the Fitbit Sense is shaping up to be a far better option than the Fitbit Versa 2.

Acting as the spearhead for its new 2020 line of wearables, the Fitbit Sense is Fitbit’s latest premium smartwatch with a bevy of new health tracking features.

You have to hand it to Fitbit – the company’s new strategy of moving beyond fitness tracking and into the realm of health tracking couldn’t be more timely. Of course, I would never suggest that Fitbit has some sort of all-knowing crystal ball that can see into the future, but the rather unique events of 2020 has everyone thinking more clearly about the importance of good mental health.

As the most expensive of Fitbit’s devices, the Sense offers the best way to engage with the company’s stress busting tactics and new features found in its Fitbit Premium service.

But at £100 more than the eerily similar Fitbit Versa 3, it’s perfectly fair to question whether or not that additional £100 is worth it. After weeks of testing, here’s our final verdict.

To say I’m a little surprised by the design Fitbit’s chosen for the Sense would be a huge understatement. Not that there’s anything inherently egregious about the design in question, it’s just that it looks almost identical to the Fitbit Versa 3. 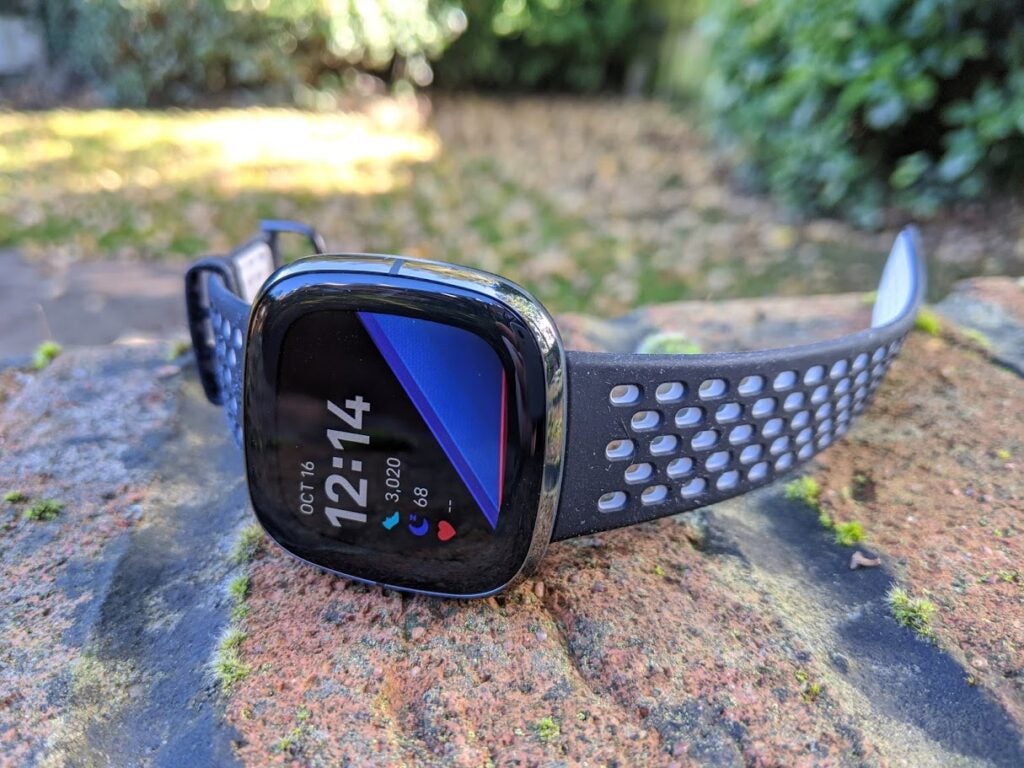 From the curved edges to the little indent that now replaces the typical spot for a physical button on Fitbit’s wearables, it’s easy enough to confuse the Sense for the Versa 3 from a distance – and that’s a problem. I’m perplexed that Fitbit hasn’t done more to separate these two devices, at the very least to convey to the general consumer that the Sense is in fact a far more premium product.

As previously mentioned, the Fitbit Sense features a curved body topped with a Gorillas Glass 3 display, and a stainless-steel ring added for a bit of additional flare – something not found on the Versa 3. A metallic panel is also used to house the various sensors on the back of the device, one that I’ve found can pick up scratches very easily.

There are also no physical buttons to speak of, but aside from the wearable’s touchscreen, users can squeeze the Fitbit Sense to perform contextual commands. I was skeptical at first, but as it turns out this method of interaction is incredibly responsive, so there’s no love lost here.

Out of the box, the Fitbit Sese comes with the new Infinity Band which features a silicone like texture and plenty of notches to help users find a fit that’s right for them. As always, there’s myriad room for customisation here as the watch band can be removed with ease, as I jumped between the Infinity Band and a provided Sport Band. 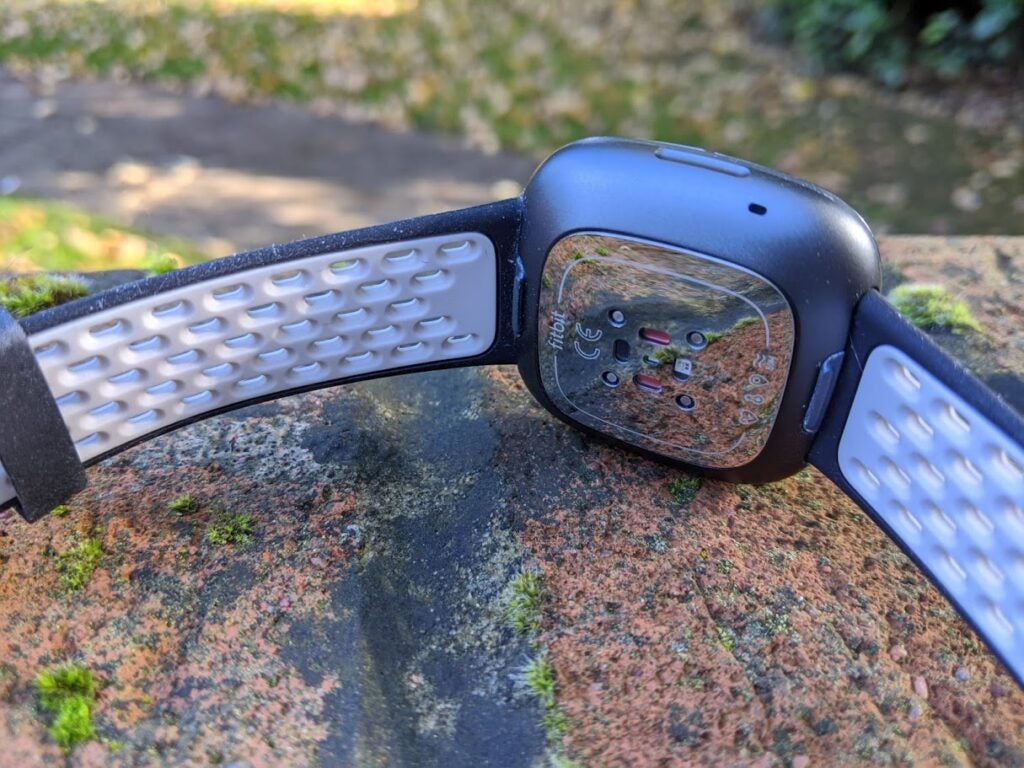 Featuring a curved screen and mid-sized bezels around the sides, the Fitbit Sense certainly looks like a modern wearable, and it’s a nice go-between of the circular Wear OS norm and the more rectangular aesthetic of Apple Watch.

The 1.58-inch AMOLED panel is also incredibly easy to read in all lighting environments, and can be set to an ‘always on’ mode so you’re never more than a quick glance away from discovering the time.

Overall, it’s a beautiful screen but the only downside is that Fitbit OS hasn’t been fully optimised for the display’s unique curvature. For instance, diving into Fitbit Coach on the Sense, the title and duration of the last workout featured is slightly chopped off.

I ran into a similar issue when using The New York Times app for Fitbit – left unable to read the final sentence of a story. I can understand the oversight for third party apps, but to have this issue in Fitbit’s own apps feels like a lack of internal communication. 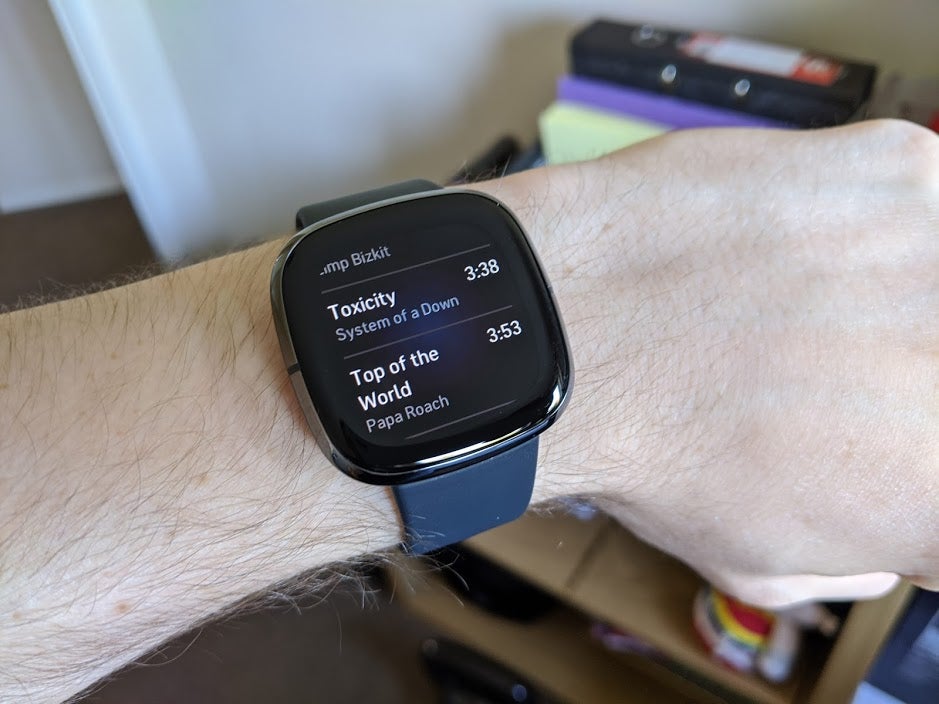 Despite being the eagerly awaited follow up to one of its most popular wearables, the Fitbit Versa 2 was a bit underwhelming, particularly for its lack of in-built GPS which, even in 2019, was quickly becoming the norm. By comparison, the Fitbit Sense feels like the true upgrade fans have been waiting for.

It’s not just that GPS has finally made an appearance, but the Fitbit Sense also has an ECG sensor and its much touted EDA sensor. The electrodermal activity sensor is designed to track subtle changes in the user’s body composition, such as skin temperature and the appearance of sweat, to determine the stress level of the individual and potentially spot illnesses ahead of the appearance of symptoms.

Via the EDA sensor, the Fitbit app will now register you with a stress rating out of 100, and the higher your number the better. The key here is that it helps the user pay more attention to their mental health and it’s intrinsically linked with the mindfulness section of the Fitbit app.

I was impressed to see that the EDA sensor successfully picked up on my state of mind during several meditation sessions where my thoughts were elsewhere. I only wish that there were more meditations within the Fitbit app that made explicit use of the EDA sensor. Too often I was told to put a hand on my heart, something that’s impossible to do when your watch hand needs to stay incredibly still while your other hand rests firmly over the Fitbit Sense itself. 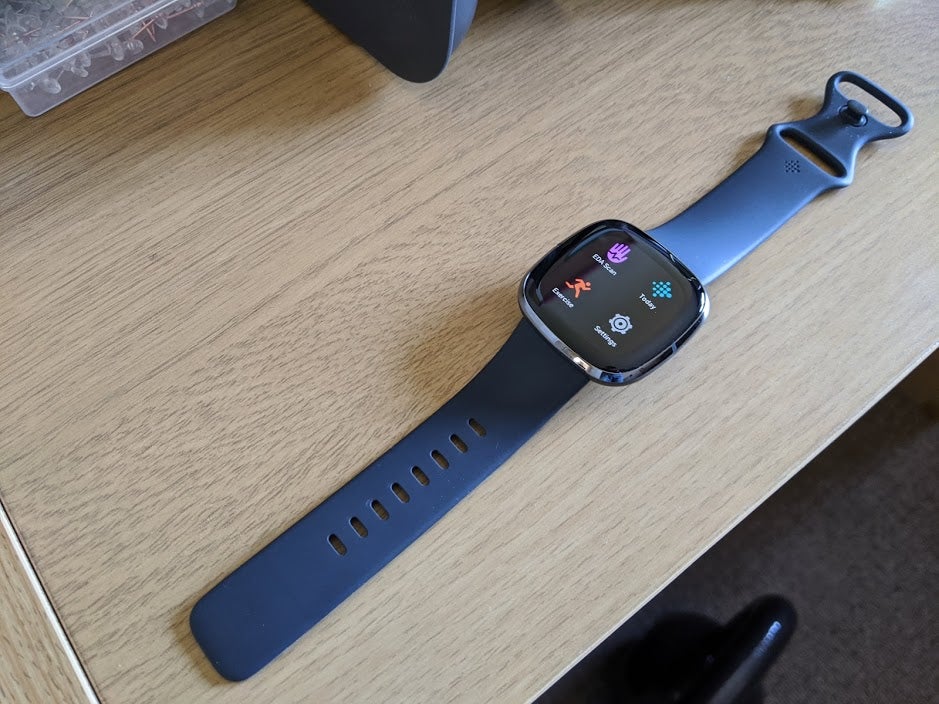 The Sense also adds blood oxygen tracking into the mix, with a handy watch face dedicated to making use of the new feature. Simply wear the SpO2 watch face to bed and you’ll have an accurate reading in the morning of how your blood oxygen levels changed throughout the night. Both the ECG and SpO2 trackers can be crucial in determining underlying health issues, so it’s great for peace of mind to have them present on the Fitbit Sense.

Alexa makes a return as the Sense’s built-in smart assistant (Google Assistant is coming to the Sense, although surprisingly not at launch). Similarly, audio responses via the built-in speaker are on the way, but are currently nowhere to be seen. It’s not the worst thing to have to wait for these features to appear, but it’s a shame that Alexa functionality is still so limited on the watch itself. Unless you maintain a constant connection with your phone, Alexa won’t have a word of it. Given that I mostly use the smart assistant for setting cooking timers, it seems a bit daft that this can’t be done without a paired device.

As you’d expect, Fitbit Pay is also present here but the feature isn’t anything to write home about as it lacks support for many banks. At this point, the hope is that Google’s ongoing acquisition of Fitbit might eventually lead to the far superior Google Pay being implemented on future Fitbit devices.

Given that the Fitbit name is almost synonymous with fitness trackers themselves, it should come as no surprise that the fitness experience on the Fitbit Sense is largely excellent. During a workout, a simple tap or swipe on the screen will let you bring up various key points from your heart rate, distance covered and even just the time itself. What’s great is that when you swap to one of these screens, it’ll stay there until told otherwise, which can be incredibly handy depending on which metric you want to focus on for a particular workout. 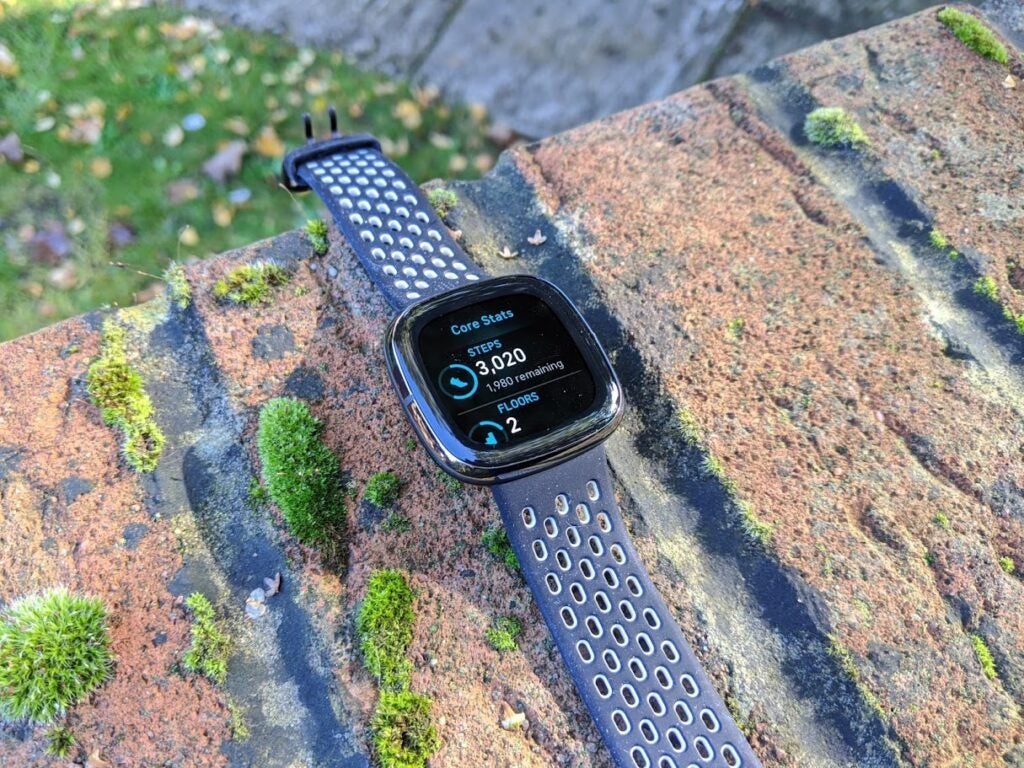 With built-in GPS tracking, the Fitbit Sense is finally a solid recommendation for runners everywhere, although the restriction to offline playback via Deezer (and Pandora in the US) might leave some runners reaching for the nearest Garmin smartwatch instead. The GPS feature itself is also particularly responsive, usually latching on to a signal in under 15 seconds.

The experience is made even better by the informative and stylish way in which the Fitbit app presents running data to the user. On top of the standard feedback, you can also see your pace and heart rate at specific points of a run via the map view, giving you a great indicator of where you need to improve.

For whatever reason, the step counter in the Fitbit Sense is incredibly overzealous, so I’d recommend setting your daily step goal a little higher than usual to ensure you’re actually meeting the correct level of exercise. Luckily however, the in-built heart rate sensor is largely spot on, and only had a minor discrepancy of 3-5 points on average when compared to the Myzone MZ-3.

I do find it odd however that despite Fitbit’s prolific association with fitness tracking, the Fitbit Sense doesn’t include modes for some fairly standard workouts such as rowing and boxing. 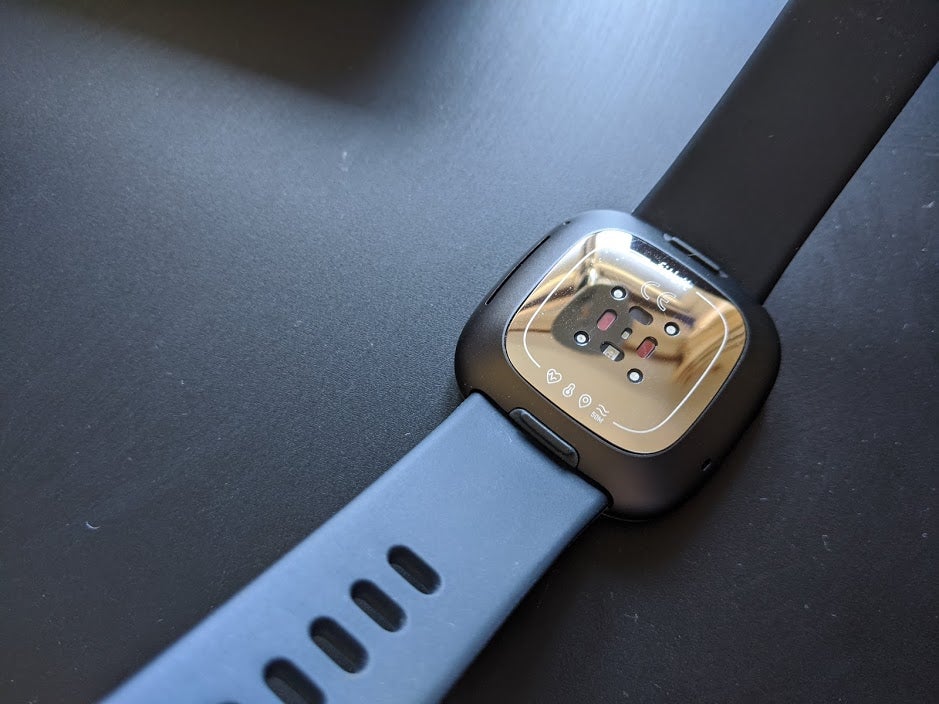 One thing that did impress us with the Fitbit Versa 2 was its solid battery life, and the Fitbit Sense seeks to build upon that momentum with a quoted 6+ days of battery life.

On our first test the Fitbit Sense managed to last for five days and six nights after tracking three workouts (one with GPS switched on), the always-on display switched off and the manual wake function turned on. That’s pretty impressive, particularly as there were several uses of the EDA sensor over the course of those five days for Fitbit’s meditation sessions.

Cranking things up a notch by toggling the always-on display, tilt to wake and listening to music during three workouts, the Fitbit Sense was only able to last two days. While that’s quite a distance from what the Sense’s battery is capable of, it’s still more impressive than most flagship smartwatches.

While the Fitbit Sense does come with six months of Fitbit Premium, it’s worth noting that an active subscription is almost essential to get the most out of the Fitbit Sense. If you’re happy with keeping that subscription going after the free trial then you’ll find great enjoyment with Fitbit’s premium wearable.