With desktop PC sales on a steady decline, this might seem like a strange sector to move into. But Lenovo has proved that AIO (all-in-one) Windows PCs can still sell well, so Toshiba’s brand-new Qosmio DX730 range isn’t all that odd. 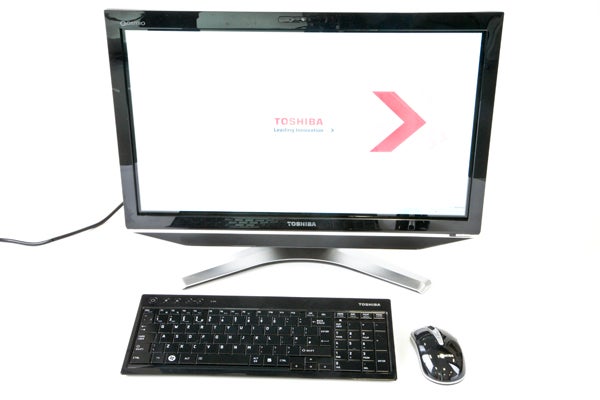 All-in-one (dis)advantages
For those of you unfamiliar with the AIO PC concept, it’s basically taking a desktop PC and fitting it into the same chassis as a screen to make for a single unit that can do everything. Probably the most well-known example is Apple’s iMac.

The advantages are that these are easier to set up than a traditional desktop system, where you have to worry about the computer, monitor and speakers as separate bits. They also take up less space, and all the parts will play nice with each other.

The disadvantages are that you can’t select quality parts yourself, have less internal flexibility and upgrade potential, and usually pay a premium. Compared to a laptop, meanwhile, AIO PCs generally offer more power, more flexibility and connectivity, and of course larger screens, but aren’t so great on portability. 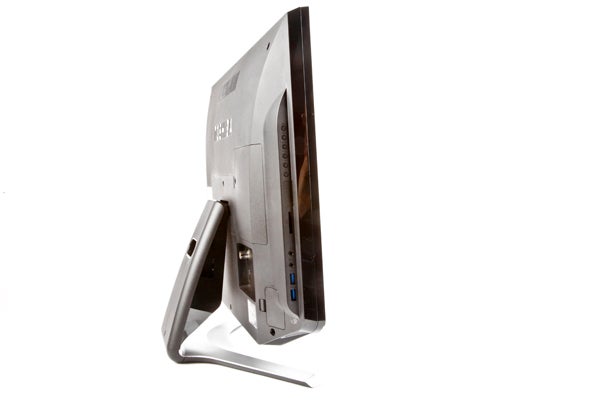 We’re checking out the ‘mid-range’ DX730-102, which for a pound shy of £1,000 sports a Core i5 CPU generously backed by 6GB of RAM and a 1TB hard drive, but lacks dedicated Nvidia graphics or Blu-ray. 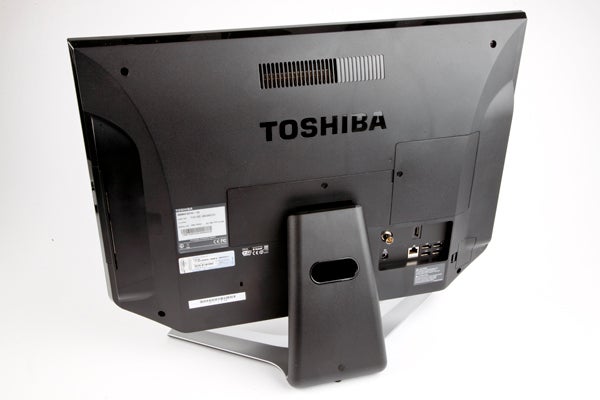 Build and Design
Our first thought on taking this Qosmio out of the box was that it’s a far cry from the metal-clad minimalism of the iMac. Then again, those start at a pound short of £1000, so we can hardly expect the same level of quality. Compared to most of its Windows-PC brethren (with the exception of the rather gorgeous Lenovo IdeaCentre A310), the DX730’s looks are up to scratch.

While most AIOs, such as the HP TouchSmart 610 and Dell Inspiron One 22, have a more TV-like design in resting the bezel close to the desk with two little feet at the front and a rear leg for stability and tilt, Toshiba’s effort follows the iMac in sporting a more monitor-like body with a single foot that offers tilt but no height adjustment. Unlike the Apple AIO though, the DX730’s stand can be removed for wall mounting. 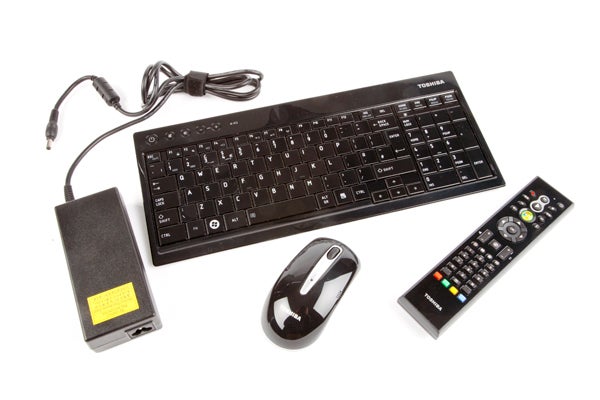 Build quality is quite good throughout with only a hint of creak here and there, and a lovely smooth action on that tilt hinge.

What struck us most on taking the DX730 from its packaging was its incredible glossiness. Though the entire back is matt textured plastic, the black bezel and included peripherals are as shiny as they get, and consequently form an unsightly attachment to fingerprints, grease, dust and scratches. At least the silver stand and mocha speaker grill don’t add to the forensics lab results.

Connectivity
Connectivity on the Toshiba Qosmio DX730 is very good, and it’s stuffed with features. The right houses only the tray-loading optical drive, with the HD webcam and microphone neatly integrated in the screen’s top bezel. The rear features screw-accessible bays for upgrading memory and storage, while a cut-out panel houses a TV antenna connector, HDMI port, Gigabit Ethernet jack and four USB 2.0 ports. Wireless duties are handled by the usual Wi-Fi N and Bluetooth combo. 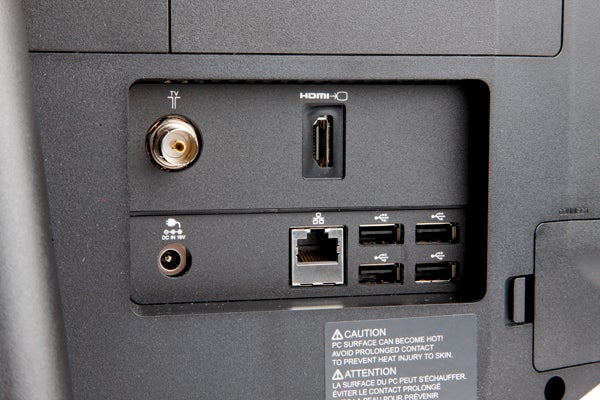 The left side is where things get really interesting. Hidden behind the bezel here you’ll find an SD card reader, headphone and microphone jacks, and two USB 3.0 ports. There’s also a selection of buttons, which not only control volume and screen brightness, but also switch to the HDMI input and turn the screen off. The reason that last sentence is in italics is because it’s a surprisingly rare addition to AIO PCs, despite how obviously handy it is to turn the screen off without needing to put your computer into standby. Bravo Toshiba. 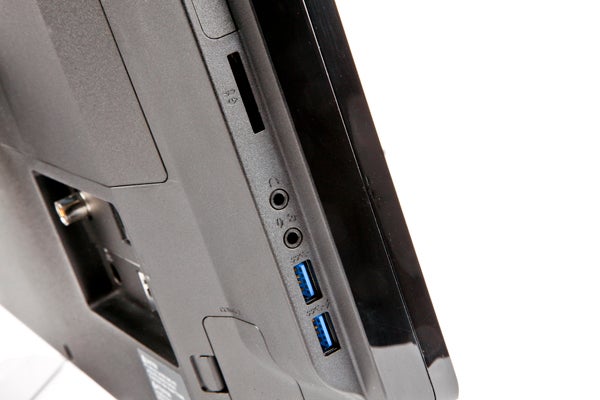 Peripherals
Toshiba’s bundled peripherals leave a mixed impression. It’s worth pointing out that the wireless mouse and keyboard don’t come with a dongle to take up one of your precious USB ports and that they’re pre-synced. On the other hand this does of course mean that you can’t use them with any other PC or laptop.

Like the DX730 itself, the mouse and keyboard are glossy-fronted and feel even cheaper. Thankfully, though the keyboard’s keys look shiny they don’t actually pick up fingerprints, even if its surround does. Still, their smooth surface is really unpleasant to the touch. 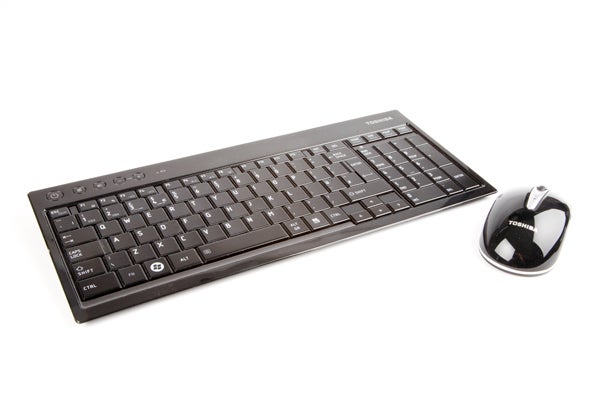 Thankfully, key feedback is decent enough with a fair amount of travel and only slightly mushy action. This actually makes it one of the better bundled keyboards we’ve come across recently, but that’s not saying much and we’d rather use an ordinary desktop keyboard from any decent third-party manufacturer.

The three-button, ambidextrous optical mouse makes the keyboard look premium by comparison, though it’s actually quite comfortable in the hand and its four-way, rubberized scroll wheel does the job. Gamers should immediately acquire another rodent though. 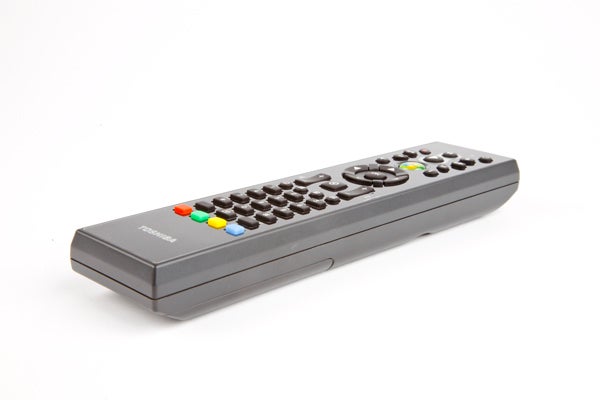 Last and least is the Windows Media remote, a horribly bulky and ugly thing that’s too thick to be comfortable even in large mitts. At least it uses AA batteries so you can switch to rechargeables.

Overall we’d say Toshiba’s peripheral selection is cheap and cheerful, but thankfully you can replace all three with something a little higher-end. Of course, thanks to the optical sensor tech embedded in the Qosmio DX730’s screen bezel (as used in nearly every other touch-enabled AIO PC), you can also use touch. 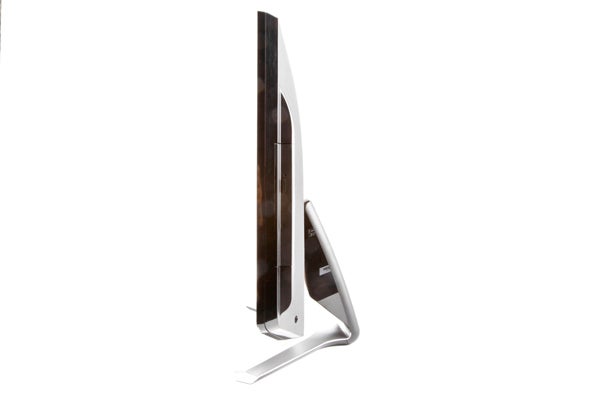 Touch
Touching the screen leaves rather obvious prints on its glossy finish. However, because the touch technology is based on sensors in the bezel rather than a capacitive layer, you can use anything you like as a pointer/stylus rather than your fingers: from bananas to the back of a marker pen. The system is also very sensitive, and sometimes hovering a micrometre away from the screen’s surface already results in input.

There’s support for a whopping two fingers at once, which is just enough to play the included Microsoft touch games and little gems like the Windows version of Plants Vs. Zombies (not included, unfortunately). It’s also plenty to navigate through Windows 7, which wasn’t designed with touch in mind but does cope, if a little awkwardly. You can always upgrade to the completely touch-minded Windows 8 at the end of the year though.

Screen
Unfortunately, the lack of quality screen options is our main bugbear with most AIO PCs, and the 23in, 1,920 x 1,080 Toshiba joins the crowd. You see, like budget monitors, most AIOs use TN panels, which suffer from poor viewing angle characteristics. The only readily available exceptions are the 27in iMac and
HP TouchSmart 610, which both use high-quality IPS panels – the same type used in monitors for professional photographers and digital artists. 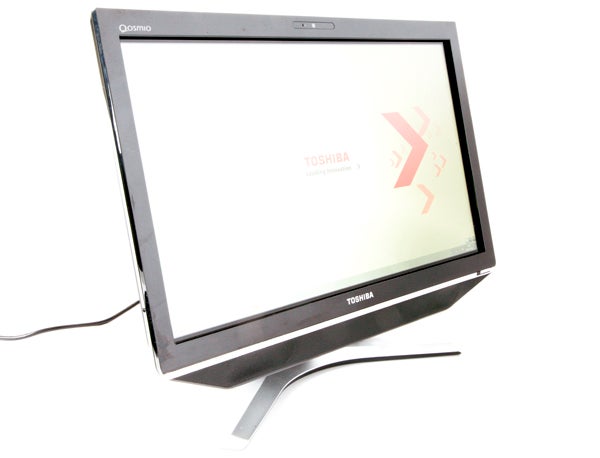 Thankfully, the Qosmio DX730’s screen is at least one of the better TN displays we’ve come across, nearly rivalling that of the 21in iMac. Viewing angles do suffer from the tech’s telltale contrast shift, but you have to be quite far to the side to see it. Colour shift is a bit more dominant with whites turning yellow quickly, but this is less of an issue for daily use.

The good news continues with contrast, which is up there with the best of the rest. Blacks are deep without compromising subtle dark detail, and colours are reasonably vibrant without being oversaturated. The glossy screen finish does cause annoying reflections but also enhances the perception of these strengths. Excellent sharpness and no noticeable artefacts round out a good performance, though the colour shift means it’s not ideal for colour-sensitive work. 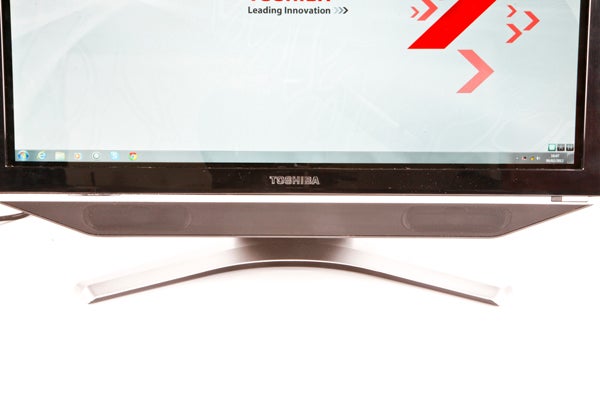 Sound
Though Toshiba has partnered with Harmon/kardon for its laptop speakers with superb results in the past, for its first AIO PC it has decided to go with Onkyo. Of course, with gems like the Onkyo TX-NR709 under the latter Japanese company’s belt, that’s certainly no bad thing, and in practice it does lead to good performance  – if not quite as impressive as we were hoping.

The speakers offer up plenty of detail at a decent volume level, though distortion does creep in at maximum. The subwoofer is a tad subpar, providing just enough oomph to make its presence felt but never giving adequate punch to match the average dock, for example. Overall, it’s not a huge step above the MSI Wind Top AE2400 but for most activities, external speakers won’t be required.

Speaking of which, the Qosmio DX730 shares the same awesome Sleep & Music technology we first came across on the Toshiba NB520. This means you can plug in an MP3 player or other audio source and use the PC’s speakers even when it’s turned off. It’s a genuinely useful innovation that we wish every computer offered.

Performance
As already mentioned, we’re looking at the mid-range Toshiba DX730-102, with an Intel Core i5 CPU, 6GB of RAM, integrated Intel graphics and a 1TB hard drive. Configurations with up to a Core i7, a whopping 16GB of RAM and huge 2TB hard drive might be in the pipeline, but that will probably be overkill for most. A genuine reason to go for the current higher-end model would be its dedicated Nvidia GeForce GT 540M graphics though, since – as you’ll see below – the 102’s integrated effort is only just adequate for casual or older titles.

Mind you, we have no complaints of the processor. The Core i5-2430M is a dual-core chip with support for up to four virtual cores and a default clock speed of 2.4GHz, which can Turbo clock up to 3GHz. It will happily handle any productivity tasks you might throw at it, and is even up to light video editing.

Likewise, 6GB of RAM should be plenty to be getting on with – though quite a few retailers are selling a version of the DX730-102 that has 4GB, which is still sufficient for most. 1TB of storage is fairly generous and as it’s easy to upgrade or expand using external drives, we wouldn’t worry about running out of space.

Graphics are the DX730-102’s weak point, at least if you’re into 3D gaming. Mind you, old and undemanding titles like TrackMania Nations Forever will run just fine, but in a ‘proper’ game like Stalker Call of Pripyat, the Intel HD 3000 graphics only managed a barely playable 19.4 frames per second average, and that was at Medium Detail and 720p. The one advantage of not having more powerful graphics is that the Qosmio DX730-102 stays nice and quiet even when under load.

Value & Rivals
Value is difficult to assess, as for now this particular configuration of the DX730 is available exclusively from Costco for £999inc VAT. Other configurations are available from various etailers, but these tend to be significantly less powerful, with the most widely stocked model combining a Pentium B930 2.1GHz and 4GB of RAM for around £580. 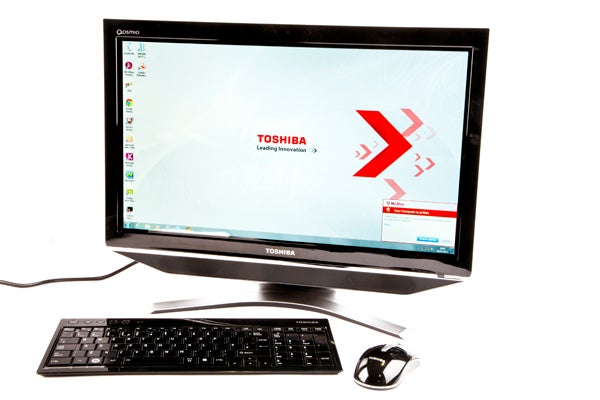 Unfortunately, our £999 review model gets shot down straight away by the award-winning HP TouchSmart 610, which in its most recent incarnation will set you back the same amount for a machine with the same CPU and hard drive, but dedicated AMD Radeon graphics, a Blu-ray drive, far better peripherals and, most importantly, a 23in IPS screen that’s miles above the competition and folds down to almost flat for easy touch. The word here is “owned”…

If a thousand quid is above your budget, a Core i3 TouchSmart 610 with Intel graphics, 4GB of RAM and a 750GB HDD can be had for as little as £800. However, at lower price points the Qosmio DX730 does become more competitive.

We generally like Toshiba’s first foray into the all-in-one PC market. The Qosmio DX730 is a reasonably attractive and compact machine with a wealth of options and connectivity. Its 23in Full HD screen is decent, as is the audio experience from its Onkyo speakers, and it’s only let down by poor included peripherals. The DX730’s main problem is that the established competition offers more for less at the high-end, so only if you’re looking for a sub-£700 PC will the Toshiba Qosmio DX730 range truly appeal.