Since the death of the beige box, laptops have become the default computer of choice, especially since most are capable of matching desktops for everyday performance. However, if you don’t really need the portability of a laptop, the all-in-one PC is a great alternative, providing tight integration of hardware combined with the superior ergonomics of a desktop PC.


The current champ in that particular corner is very much the Apple iMac which, through continuous tweaking of its already great design and improvements in specification, has managed to remain top of the class. Naturally, there are many Windows-based alternatives and most recently we’ve seen multi-touch enabled devices from MSI Wind top AE2400 and HP, while back in May we saw Samsung getting in on the all-in-one act.


Lenovo has a number of all-in-one options, and the IdeaCentre range is pitched as its lifestyle range, with design a priority. By our reckoning the IdeaCentre A310 certainly succeeds on that score – we think it’s one of the most eye-catching and stylish all-in-ones around. 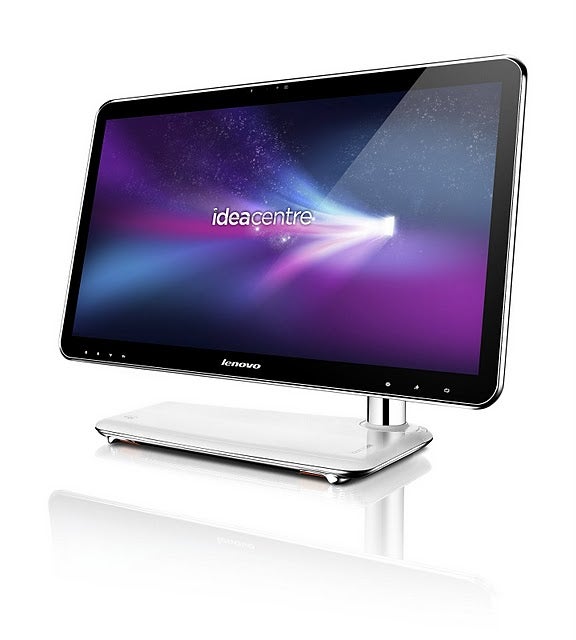 Its design clearly has echoes of the the G4 PowerPC generation of iMac, thanks to the pearlescent white chassis and the fact that the components are located in the base, rather than behind the screen. That’s not to say it looks dated though, and the monitor’s black bezel with silver edging nicely offsets its white casing.


Set-up is fabulously straightforward. It uses an external power supply, so you just have to plug in the power cable into the base to get things going and there’s a power button on the base.


The keyboard and mouse are cordless and Bluetooth-powered while Wi-Fi is on board for networking, so it’s clutter free. It all weighs a mere 9.5Kg, which enables it to be picked up and carried easily, making for a machine that’s very easy to move between locations in a home.


The 21.5in display is less than an inch thick and is attached to the base by a silver arm located at the rear right. This enables the display to rotate from side to side and tilt up and down, which gives it a slight advantage over the current iMac in that regard. There’s still no height adjustment though and no multi-touch action going on here – it’s a conventional screen.


The display is LED backlit and offers a Full HD resolution of 1,920 x 1,080, which has fast become a standard we expect to see, rather than hope for. There’s a webcam and microphone built into the bezel at the top, while at the bottom there are indicators for hard disk activity, Bluetooth, and the integrated 802.11n standard Wi-Fi. On the right you’ll find touch screen controls for the display’s OSD.

Connectivity is located around the edges of the base, which makes it much more accessible than on the iMac, where it’s all located at the rear. Down the left hand side you find two USB ports, a headphone and microphone sockets and an SD card slot.


At the back you’ll find two more USB ports, a Gigabit Ethernet port, and no less than two HDMI ports. One of these is an output, while the other is an input, which means you can use the PC as a display for an external device such as an Xbox 360, PS3, or PVR as well as feeding its signal to a large TV. This is a great plus and a distinct advantage over almost every other all-in-one out there, including the well-connected MSI Wind Top AE2400.


You’ll also find an input for a hybrid analogue and digital DVB-T TV tuner, accessible via a supplied break-out connector, while a sleek remote control is supplied for Windows Media Center operation. The remote matches the white finish of the main PC, but it’s a shame that you’ll have to attach the supplied infra-red receiver via USB, rather than it being integrated.


At the rear left you’ll find a Kensington lock hole, while at the rear right there’s a button for engaging a Wireless Bluetooth Wizard should your peripherals lose connectivity, though we never had this issue during testing. 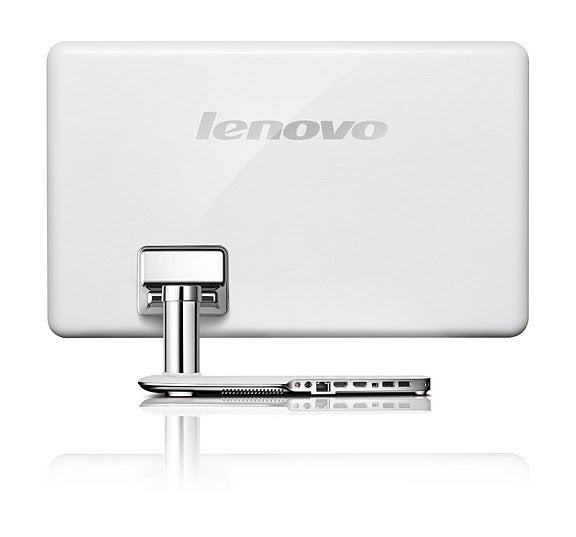 One thing that’s missing from the chassis is an optical drive, with an external DVD burner supplied in the package, and this will need to be attached via USB. This lack of integration can be viewed as a disappointment, since it will mean an extra box and cable clutter, especially if you need regular access to the DVD drive.


If you’re a regular DVD watcher it’s an issue, but with so much media now consumed online, we don’t see it as too much of an issue. It’s a shame that the drive isn’t a Blu-ray drive model, but at least you can hook up a PS3 or dedicated Blu-ray player if you do want to watch disc-based media.


Fixed storage is provided by a single 500GB drive from Hitachi. While this is ample for local storage, this is a 2.5in, 5,400rpm notebook SATA drive, so performance isn’t going to be stellar. Indeed, the HDD score from PC Mark Vantage hard disk test reflects this, achieving a lacklustre 2668 points – lower than the HP, MSI, and Samsung Windows based all-in-one PCs we’ve tested.


In terms of core specs our review sample was powered by an Intel Core i3 M350 running at 2.27GHz, along with 4GB of 667MHz DDR3 RAM. The latter was installed in one of the two RAM slots, which means the system was only running in single channel memory mode, again compromising performance.


A free DIMM slot is on hand so you could add another to go up to 8GB, but this system doesn’t lend itself to user upgrading. Also, 4GB should suit users of this type of machine, so we would probably have preferred to see two 2GB DIMMs used from the outset.

In terms of overall performance, the Lenovo turned in an overall PCMark score of 3892, which means of our recent crop of all-in-ones tested it only managed to outperform the Samsung U200, and that’s powered by a previous generation Core 2 Duo T4400.


The graphics core is actually integrated into the Intel Core i3 processor, which makes it all the more ironic that there’s no Blu-ray drive – as one of the advantages of this generation of Intel integrated graphics is that it can send Dolby True HD and DTS MA via HDMI. It’s certainly not the attraction of raw performance, as testing with Trackmania Nations we only achieved 25.6fps at native resolution of 1,920 x 1,080 with 4x AA, which isn’t that impressive. Dropping to 1,024 x 768 garnered us 40fps, but when you have a high resolution display, that’s not what you want to do.


In terms of image quality the highlight of the display is its resolution and its nicely saturated colours, though the high gloss background is either boosted or hindered by its high gloss coating depending on your preferences and lighting conditions. Colours do pop, but in bright lights it is very reflective.

Contrast levels were good, with all steps visible in the Lagom contrast test, but black levels and white saturations proved less convincing, indicating that there’s less details visible in darker and brighter areas of the screen. Options are limited here. You can adjust brightness, but not contrast and only choose between three presets – Internet, Text and Movie.


While we like the fact that the keyboard and mouse are wireless we found ourselves disappointed with their quality. The mouse is a little lightweight and cheap, and the keyboard is worse. Its colour doesn’t quite match that of the chassis and it lacks the machine’s quality and finish. It’s also not full-size, and keys feel cramped, shaky and imprecise. Typing after a small break in use of the system we also detected a delay between pressing a key and getting a response onscreen. Overall, compared to the high standard set by the display and base, the peripherals are a let-down.


We were also disappointed by the speakers – these are located under the base, which is discreet but doesn’t do them any favours, particularly as the output is weedy, lacking volume, bass and presence.

Lenovo ships the 64-bit version of Windows 7 on the PC, which means that it can at least make use of the full 4GB of memory. In terms of additional software we had fun playing around with the preinstalled Cyberlink YouCam software, which will replace your mug with an animation of your choice from a selection that includes the Statue of Liberty, Santa Claus and a dog’s head. Not much use, but fun for kids. You also get Cyberlink’s Power2Go DVD burning software and McAfee Security Center, which integrates AV and Firewall protection.


Overall, this is a slick-looking and easy to use PC. It suffers from a few flaws that limit its appeal, but it still has a lot going for it, especially on the design front. Ultimately, we would still recommend the iMac over Lenovo’s option, but as this particular specification can be hand at Amazon for £114 less than an entry-level iMac, it’s certainly worth considering.


We are fans of the build and looks of this all-in-one machine, which makes the poor quality of the wireless keyboard and mouse all the more galling. The lack of an integrated optical drive is an inconvenience and performance is also below-par compared to similar machines. On the upside though, the display is decent, and the neatly integrated TV tuner and HDMI ports add appeal. If you’re after a stylish machine that will handle the basics well, this reasonably-priced all-in-one offers an undeniable attraction.