Touch is a great way of interfacing with products, as
abundantly proved by smartphones such as the Apple iPhone 4 and tablets like the excellent Asus Eee Pad Transformer. Unfortunately, we haven’t found it as useful on most
all-in-one (AIO) PCs we’ve looked at, as on an upright display it’s more
tiring than just using a mouse and keyboard.

HP looks set to change all that with its brand-new
TouchSmart 610, which folds down to a comfortable 30 degrees for extended touch
sessions. As it also throws in a Full HD 23in screen, multiple HDMI inputs, a
Blu-ray player and digital TV tuner, USB 3.0 connectivity, a Core i5 CPU and
1.5TB of storage along with dedicated graphics, we’re hopeful that this PC can
finally take on the mighty 22in iMac for the sub-27in all-in-one crown.

As expected, compared to the sharp, aluminium lines of the
iMac, the 610 doesn’t quite hold up. However, as it’s far more adjustable than
the pitiful tilt of Apple’s machines, your fingers will thank you for its lack
of sharp edges – especially when carrying the PC between locations. 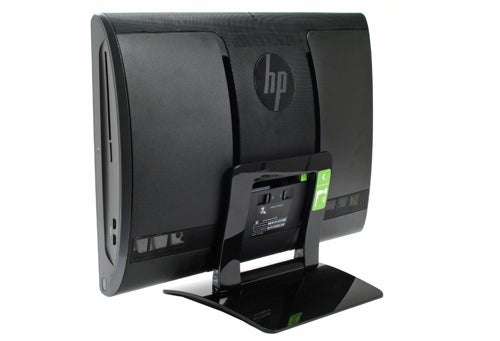 When put up against less premium rivals like the MSI Wind Top AE2400, its combination of matt black and glossy gunmetal grey is
quite attractive. Only the glossy black stand, which matches little else about
the PC, sticks out like a sore thumb. We wish HP had kept the finish more
consistent. Build quality is excellent, with no unwanted flex or creak in the
panels.

Thanks to its unique sliding hinge mechanism, which allows
for its semi-horizontal positioning, the TouchSmart 610 is also
height-adjustable in its upright mode – already a definite advantage over most
AIO rivals. However, this is limited to raising the screen’s base from 2.5 to
5.5cm off your desk. Height adjustments are also quite stiff, and you’ll
definitely need two hands to perform them. Tilt is far more forgiving and very
generous.

Sliding the 610 into its ‘easy-touch’ position, meanwhile,
is smooth but still takes a little effort. Also, it’s important to ensure that you
have enough free desk space in front of the machine, and that the mouse and
keyboard are out of the way. We will cover what it is like to use the TouchSmart
with your fingers later on in the review.

Last of all, unscrewing a section of the PC’s base and
re-attaching it to its rear allows it to act as a wall-mount. While this will
doubtless have limited appeal, especially since you’d lose out on the machine’s
tilting ability, it’s nevertheless a thoughtful inclusion.

Topping things off nicely, the 610 stays very quiet even
under load.

Connectivity is another strong point of HP’s TouchSmart 610.
Hidden around the sides you’ll find a memory card reader, two USB ports and
headphone plus microphone jacks, as well as twin HDMI inputs for hooking up
consoles and the like. These are joined by slightly stiff physical volume
controls on the left, and the seamlessly integrated slot-loading Blu-ray player
and backlit power button to the right.

For networking the panel also hides a Gigabit Ethernet port,
while wireless duties are taken up by WiFi N and Bluetooth. All this makes the
TouchSmart 610 one of the most versatile AIOs we’ve reviewed. 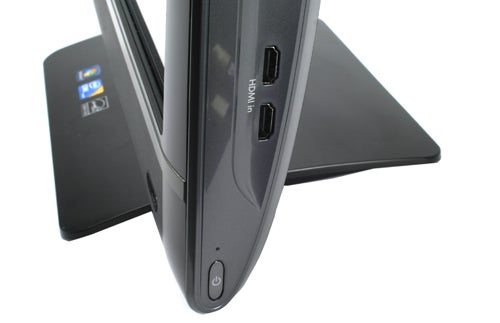 Specifications are also nothing to sniff at (we’re reviewing
the HP TouchSmart 610-1030uk model, as opposed to the cheaper and lesser
610-1000uk). As the brains of the operation we have an Intel Core i5-650. This
dual-core processor supports Hyper-threading for up to four virtual cores and
will Turbo-clock up from its default 3.2GHz to 3.46GHz (depending on the number
of active cores).

While it might not match up to the new Sandy Bridge
processors found in some rivals and the new Apple iMacs, it’s still more power under the bonnet than the average consumer
will need for a while to come.

It’s backed by a generous 6GB of DDR3 RAM, which again
should be plenty for all but the most demanding consumer and is more than you
get as standard with most all-in-one (AIO) PCs. Likewise with its storage,
which at a whopping 1.5GB (albeit at a slightly slow 5,400rpm) is the largest
capacity we’ve seen in an AIO.

As usual with this type of machine, the TouchSmart’s weakest
link is its graphics. Though there’s a discrete AMD Radeon HD 5570 with 1GB of
dedicated RAM, this is still a mid-range ‘mobile’ or laptop graphics card, and
its performance reflects this. Naturally it does a fine job of video acceleration
and intensive video as well as supporting DirectX11, but intensive 3D gaming is
beyond it.

On the other hand, its performance is significantly better than many alternatives, and if you’re willing to live with a few compromises many games will run smoothly. For example, at 1,280 x 720 on Medium Detail it managed a silky 41.65 frames per second (fps) average in Stalker: Call of Pripyat. However, turning the resolution up to the screen’s 1080p maximum and upping detail to its maximum resulted in a far less playable 20.35fps.

If you’re a gamer, it’s also worth noting that the 610 comes with an HP-exclusive touch-enabled edition of Ubisoft’s R.U.S.E., which we’ll give you more feedback on in the ‘Touch’ section of this review.

Part of its premium product branding, the TouchSmart 610 utilises Beats audio for its speakers. After our experience with the HP Envy 14 Beats Edition, we were ready for disappointment, but thankfully,
that wasn’t the case here. The large speakers here produce a room-filling
volume with only the slightest hint of distortion at maximum. Otherwise there’s
plenty of clarity, depth and punch. Though they do suffer from the bass bias
that’s synonymous with the Beats name, this is actually an advantage for movies
and games – and you’ll want to do plenty of both considering the 610’s rather
lovely screen. 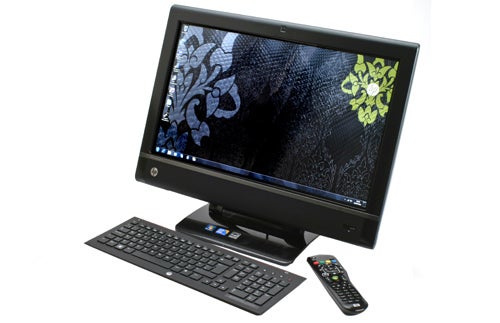 We’re seeing a real trend towards high-quality displays
recently, with standout examples such as the Samsung Series 9, Apple iPhone 4 and Eee Pad Transformer. With iMacs now also utilizing IPS displays (the panel
type used in professional-grade monitors such as the Dell UltraSharp U2410), it’s only logical that HP follows its example, and the
TouchSmart 610 sports a 23in, Full HD (1,980 x 1,020) IPS display.

As expected from IPS, viewing angles are simply superb –
though there was a hint of colour shift, something we would sooner associate
with PVA. Colours were generally accurate and saturated, helped by the screen’s
glossy finish, with deep blacks and good greyscale differentiation rounding off
a strong performance. Overall, the 610 is a joy for entertainment, photography
work, or even design and art – the high-quality panel makes it all possible. 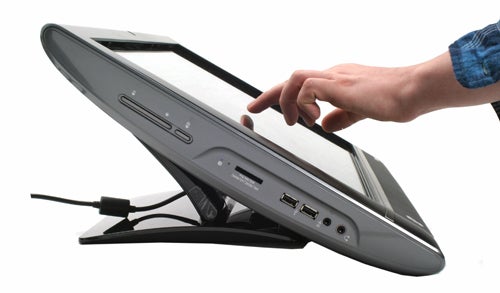 Touch on the TouchSmart, meanwhile, is about what you would
expect from the optical touch system. It accepts input from your fingers or any
other object, and will recognise up to two simultaneous fingers – enough for
the most common gesture controls. It’s reasonably accurate and very responsive,
though it doesn’t match the experience of a capacitive display.

HP has now had several generations to perfect its TouchSmart
software interface and it shows, as it’s one of the slicker solutions we’ve
seen on a Windows platform. You can arrange icons to your heart’s content
against dynamic backgrounds that move with your gestures. You can pin photos
and shortcuts to this background much like a notice board, and it’s all very
slick and (potentially) visually attractive. 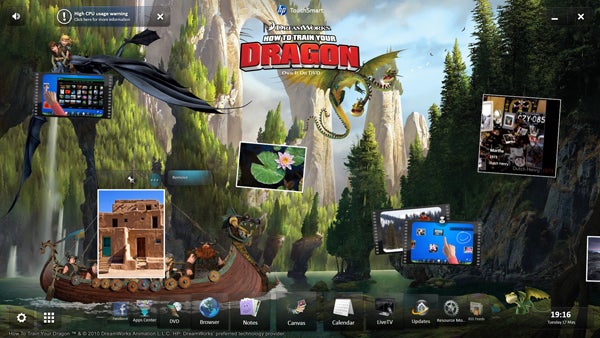 A number of touch-based games and applications are included,
but the stand-out here really is the aforementioned Ubisoft R.U.S.E. for Touch.
R.U.S.E. is a real-time strategy game (RTS) which has also been optimised for
the PlayStation Move and works nearly as well with the touch screen. We’re not
sure we wouldn’t prefer playing with the mouse and keyboard in the long-term,
but there’s no denying the novelty and sheer intuitive joy of playing with
nothing but your fingers, and the screen’s sloped angle makes it quite
comfortable to use for extended periods.


Speaking of fingers, the biggest down-side of all this touch
goodness is the amount of finger-prints easily visible on the 610’s glossy
screen, so you’ll be putting the included cleaning cloth to good use.

Naturally, touch isn’t the only way to interact with HP’s
TouchSmart 610, and there’s an extensive selection of peripherals included. The
isolation/chiclet keyboard almost equals Apple’s slim model for sheer style and
slimness, though it includes a full number pad and dedicated volume controls,
and uses AAA batteries. Its matte surface is almost soft to the touch and the
well-spaced keys offer excellent feedback. Quite frankly, it’s a king among
bundled peripherals. 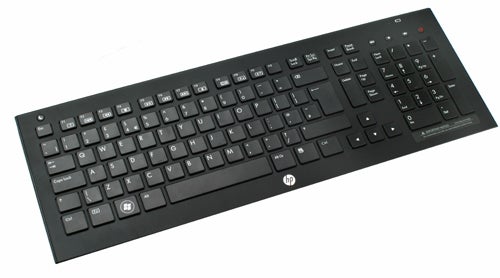 Unfortunately, the ambidextrous optical mouse does little to
maintain this impression. It’s as basic as it gets with a rubberized two-way
scroll-wheel and two buttons, and its glossy surface shows off smudges worse
than the PC’s glossy screen. 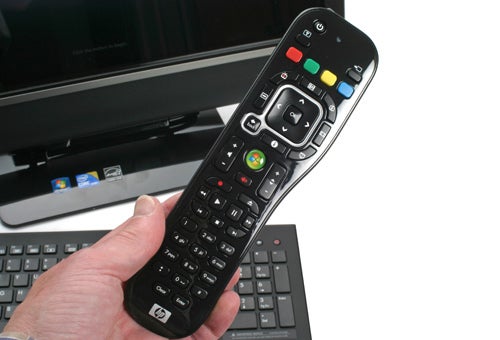 The included glossy Windows Media remote is simply huge,
which makes it comfortable to hold and gives the shapely rubber keys plenty of
room for an excellent layout. It’s not particularly stylish and will require
you to move your hand to reach all its buttons, but otherwise does a good job.

When it comes to value the TouchSmart 610 is available for a
reasonable £1,099. While this might seem expensive compared to PC rivals, don’t
forget you’re getting a superior IPS screen, better connectivity, more
adjustability and a more comfortable touch experience, not to mention extras
like the TV tuner and media remote, all in a well-built and quiet machine. 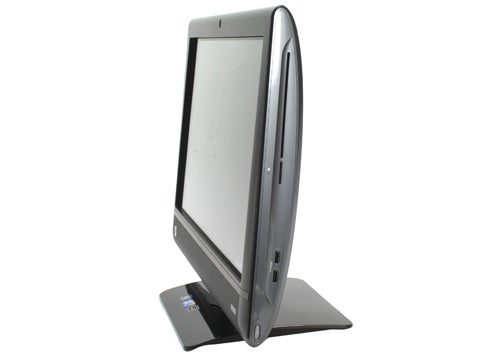 Apple’s new 21.5in iMacs are probably the TouchSmart’s biggest rivals, also offering IPS
displays. Build and design are on a whole other level, not to mention
Thunderbolt connectivity, Sandy
Bridge internals, better
graphics and HD webcams, all for £100 less.

However, do keep in mind that you’re left with a slightly smaller screen (the HP offers 23 inches), a third of the storage, no touch, no height
adjustment, no wall mounting capabilities, no TV functionality, less connection
flexibility, no HDMI video outputs, less memory and – crucially for HD
movie-lovers – no Blu-ray player. In the end, which one you go for will depend
on personal preference. 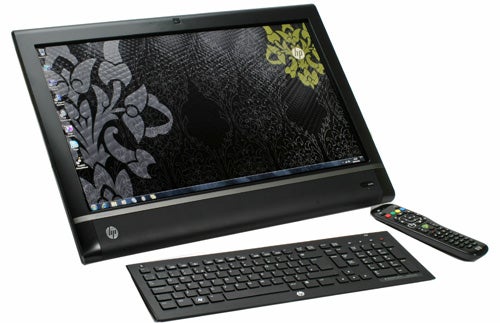 HP also offers the option of an £899 TouchSmart 610-1000uk,
rather than our 1030uk review model. This gives you the same screen, chassis, flexibility
and connectivity, put drops the processor down from a Core i5 to a Core i3, the
graphics down to a Radeon HD 4270, the hard drive from 1.5TB to 750GB, memory
from 6GB to 4GB and downgrades the Blu-ray drive to a DVD-rewriter. Frankly,
for the £200 extra it demands, the TouchSmart 610-1030uk is by far the better
deal.

Thanks to its ability to fold down to 30 degrees, here we
finally have an all-in-one PC on which touch makes sense, and thanks to its
gorgeous 23in IPS display it’s a true pleasure to use from any angle. HP also
throws in a whole raft of connectivity on top of powerful specifications, not
to mention great extras like the digital TV tuner and Blu-ray drive, making for
one of the most well-rounded models available. If you can afford it, it’s well
worth the outlay.