The TX-NR709 is the step-up version of the TX-NR609, which is the latest in a long line of great-value AV receivers from Onkyo to effortlessly combine top-drawer performance with an extensive feature list. Being the step up model, the NR709 boasts even more features, connections and power, making it even more formidable on paper, but with a higher price it’s aimed at AV aficionados. Like the TX-NR609 it’s a 7.2-channel affair, but key upgrades from the NR609 include a beefier 170W per channel, a few extra features and extra HDMIs.

Visually it’s very similar to the TX-N609 and TX-NR1009. Our sample comes in a sleek black finish, but it’s also available in silver, and although it’s a far cry from the sexy slimness of Marantz’s NR1602 the bodywork isn’t too heavy or imposing. The front panel packs in a lot of clutter but Onkyo has cleverly disguised much of it by placing the source select buttons in a ridge along the front. Elsewhere the large illuminated volume dial dominates the top left, there are composite, USB, HDMI, setup mic and headphones inputs scattered along the bottom and the top-centre display panel makes all the crucial information easy to read.

The rear panel is textbook. It offers all the sockets you need and plenty of them, with no less than eight HDMI inputs (including the one on the front), and if that’s not enough for all your kit then you need to get out more my friend. The best part is that they’re all v1.4, so if you have designs on a shiny new 3D TV and Blu-ray deck, you can rest assured that they’ll all work together harmoniously. There are also two HDMI outputs, stepping up from one on the NR609.

Elsewhere there are five digital audio inputs (three coaxial, two optical) and more component, composite, S-video and analogue stereo inputs than you’ll know what to do with. Significantly, this deck is geared more towards old-school audioheads than the NR609 with its 7.1-channel analogue inputs, 7.2-channel pre-outs and phono input for a turntable. A Zone 2 output is provided alongside sockets for custom install use (IR in, 12V trigger, RIHD remote control and RS232). You even get a 15-pin D-sub input for your PC, an Ethernet port for the on-board networking features and a universal port for Onkyo’s UP-A1 iPod dock or UP-DT1 DAB module. Happy days.

Perhaps the TX-NR709’s most enticing feature is its networking functionality, which includes DLNA media streaming, vTuner internet radio and access to Spotify, AUPEO! and Napster music streaming services. These features feel right at home on an AV receiver, putting a wealth of music at your disposal without the need for a middleman. And if that wasn’t convenient enough, you can even buy Onkyo’s optional UWF-1 USB LAN adapter and do it all over your Wi-Fi network. Throw in media playback from USB memory devices (MP3, WMA, WMA Lossless, FLAC, WAV, Ogg Vorbis, AAC and LPCM are all supported) and direct playback from iPods and iPhones through the USB port and you’ve got yourself a pretty formidable music centre.

But home cinema is this unit’s bread and butter, and as such the TX-NR709 performs all the movie duties you’d expect. For starters it’s been given the once-over by the Stormtroopers at THX, who have granted it Select Plus2 status just like its little brother. That means it’s primed to fill a room of up to 2,000m³ with a viewing distance of 10-12 feet from the screen.

It also decodes Dolby True HD and DTS HD Master Audio, as well as offering Dolby Pro Logic IIz and Audyssey DSX ‘vertical’ sound processing modes. We’re sure you know what these do by now, but in a nutshell you can expand your sound system with ‘front height’ channels (and ‘front width’ in the case of Audyssey DSX) to evoke a sense of vertical envelopment. But with seven channels, you do so at the expense of the surround back channels. The Onkyo is also equipped to handle multichannel PCM and DSD over HDMI.

As per usual there’s an enviable line-up of internal components, headlined by the Marvell Qdeo video scaling chip, which has the power to convert any content to 4K – that’s before any 4K2K sets have even hit the shops, remember. Talk about forward thinking. On the audio side, TI Burr Brown 192kHz/24-bit DACs are employed for all channels, plus a 32-bit digital signal processing (DSP) chip offers a wide range of sound modes, including four for gaming alone.

Other sound modes include a range of THX presets for movies and music; DTS Neo:6; Dolby Volume for keeping sound at a consistent level with no peaks or troughs; Theater-Dimensional virtual surround; and an Advanced Music Optimiser for playback of compressed music files (MP3, WMA etc). For music purists there’s a Pure Audio mode that shuts down the video circuitry during playback – you’ll probably save a few pennies on the electricity bill as well.

Finally, unlike the TX-NR609, the NR709 supports bi-amping for squeezing even better performance from high-end speakers.

Like most AV receivers these days, the TX-NR709 offers auto calibration, doing away with the fiddly business of setting levels, distances and speaker sizes – the onboard Audyssey technology does it all for you with the help of a setup microphone and a series of test tones. The NR709 boasts MultEQ XT, a more advanced version of the 2EQ system found on the NR609. It’s a painless procedure, with clear instructions given by the onscreen displays, but if you opt for the thorough ‘Full Calibration’ (which takes measurements from eight positions) it’ll eat up 20 minutes of your time. 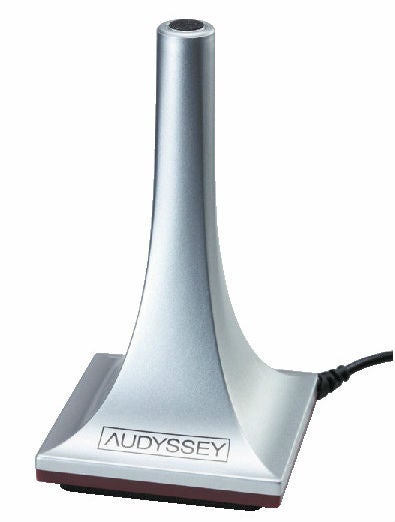 The TX-NR709 handles beautifully. Key to this is the user-friendly remote, which uses well-labelled buttons and intelligent placement of often-used keys like menu controls and input buttons. Also useful is the inclusion of macro-style buttons across the top, labelled My Movie, My TV and My Music, which turn on the unit and switch to the appropriate input. There are also dedicated keys for the various listening modes, and clearly separated playback buttons, all of which makes for a care-free user experience.

There are onscreen displays too, which are a cut above most receiver GUIs. They’re in full colour with cute graphics, all laid out in a logical, welcoming fashion. This is an absolute godsend when configuring the unit manually, as the level of detail could be fairly overwhelming for the uninitiated. It leaves no stone unturned, which will be music to the ears of enthusiasts.

The various media playback menus are also impressive, sharing the same jazzy colour palette and sensible layout. The connected features (web radio, DLNA, music streaming) are all grouped together on the same page, denoted by their respective logos, and in each instance the interfaces are easy to follow. We tried out Spotify and some of the radio stations over an Ethernet connection and despite a couple of drop-outs the Onkyo is a reliable streamer, likewise with DLNA-obtained content. The only slight gripe is that the lack of a search function makes it difficult to find tracks if you have in a large digital music collection.

As well as the main setup menu, there’s a separate ‘Home’ screen which pulls up a smaller rage of menu options if you want to make tweaks on the fly.

If we’re being candid, the jump-up in quality between the TX-NR609 and NR709 isn’t huge – there’s perhaps a bit more brawn behind action scenes but fundamentally the pair share the same sonic DNA. But that’s not a bad thing. There are excellent levels of detail, masterful orchestration of fast-paced action scenes and astonishing power, but it’s all delivered with a smoothness that won’t leave you wincing when the volume’s up high.

The Onkyo’s prowess is clear when playing The Dark Knight on Blu-ray. The DTS HD Master Audio is a test for even the best amps with its brutal fight scenes and car chases, but the Onkyo takes it all in its stride. It relishes in the opening bank robbery, teasing out all the top-end detail as the robbers zip down wires and twiddle with safes but then snapping into life in a heartbeat with a taut, punchy gunshot or a bus smacking through a wall. It’s an electrifying listen.

The thrilling high-speed chase through the streets of Gotham is our next port of call, and here’s where the Onkyo really raises hell. The roar of truck engines is forceful and visceral, shuddering through your body as if you were stood on the sidewalk. Bazooka blasts, crashing cars and explosions possess impressive depth and solidity in the low frequencies, while high frequencies are crisp and effects move round the room quickly and smoothly.

It doesn’t neglect its dialogue duties either. Voices are beautifully handled, nailing all the nuances from the gruff texture of Batman’s voice up to Rachel’s feminine tones. It also sheds light on little details we hadn’t noticed before, like the extra depth added to the Joker’s voice after he lifts his mask in the opening scene.

If there’s a downside to the Onkyo’s performance then it’s not quite as comfortable with music playback as movies, with receivers from Marantz, NAD and Denon offering a slightly more refined and insightful sound. There weren’t as many ‘shiver down the spine’ moments with our favourite tracks as we’d like. But the TX-NR709’s musical prowess is still impressive, giving tunes room to breathe, keeping pace with uptempo rhythms and providing a pleasing balance across the frequency range.

Verdict
The TX-NR709 is expensive but certainly won’t leave you feeling short-changed. Abundant connections will keep you futureproofed for ages, there’s a wealth of features on board and its performance with movies is first rate. There are more musical amps out there but on the whole you’d have to be pretty fussy not to be impressed by this marvellous receiver.