Fancy a desktop computer but without the clutter of a whole load of cables and the hassle of having to set up a PC, monitor and speakers separately? Then an all-in-one (AIO) PC is the way to go. This incorporates the aforementioned bits into an integrated whole which gives a far cleaner look and feel while taking up less space, though there are significant disadvantages too. For example, if the screen breaks you might need to chuck the PC part too, and due to the use of ‘laptop’ parts upgrading is made more difficult and there are considerable performance compromises. However, if you have decided on the AIO route, Dell’s fairly stylish, Full HD and touch-capable Inspiron One might be just what you’re looking for. 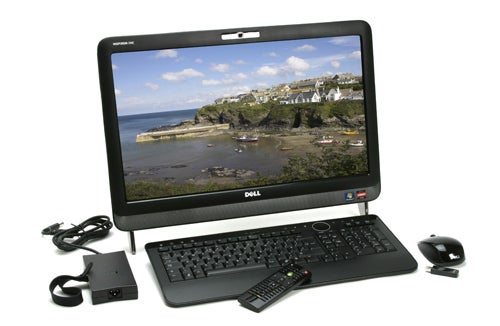 In blatant contradiction of the One’s name, Dell provides two different series. The Inspiron One 22 is an entry level, 22in, AMD-based machine, while the Inspiron One 23 gives you an extra inch of screen real estate and is a higher-spec, Intel-based affair. 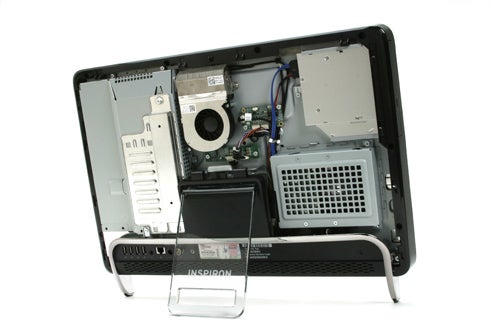 In fact, considering that you can usually customize the heck out of Dell machines, it’s very disappointing to see that almost nothing on the Inspiron One 22 is upgradeable – or downgradeable, for that matter – prior to buying. You get a choice between the two configurations mentioned above and that’s it. At least on the more expensive of the two, a DVB-T/analogue TV tuner and inbuilt wireless N card come as standard, while the specifications should be powerful enough to handle most tasks – demanding 3D gaming excepted.


On the bright side, both the optical and hard drives are very easy to upgrade yourself. The Inspiron One 22’s back cover simple slides off, after which undoing a few screws is all it takes. So Blu-ray is an option if you’re wiling to get your hands dirty. 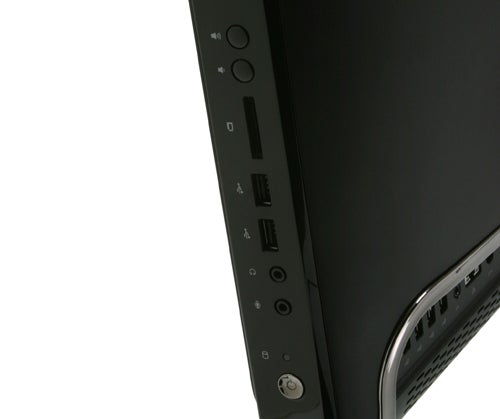 Connectivity is yet another disappointment. Along the right hand side of the machine, you’ll find a memory card reader, two USB 2.0 ports, and headphone plus microphone jacks nestled between volume controls and a blue-backlit, chromed power button (which becomes backlit in red when on standby). At the back we have another four USB 2.0 ports, 3.5mm line out and in jacks, a Gigabit Ethernet port and the tuner’s antennae jack.


There’s no USB 3.0 or eSATA for hooking up fast external storage and, more worryingly, no video in or outputs. This means you can forget about using a secondary display with the Inspiron One 22, and hooking up external devices like consoles or netbooks is also out of the question. 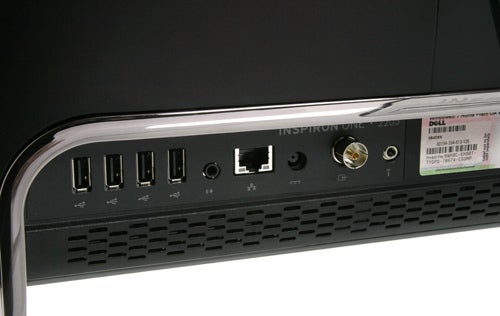 It’s quite frankly the worst-connected AIO we’ve seen in a while: even the Samsung U200 at least offered eSATA and DVI-out, and both the Asus EeeTop and MSI Wind Top AE2220 threw digital audio and HDMI-out into the mix. It’s more than a little disappointing that the One 22 can’t match the connectivity found on machines that are nearly a year older.

On the design front, Dell has given its Inspiron One 22 a clean and reasonably stylish, but not exactly ground-breaking, look. However, while it doesn’t come close to matching the svelte Lenovo IdeaCentre A310 or indeed Apple’s better-known 21in iMac (at around 5cm thick, this AIO has few pretentions towards thinness), it’s more understated and just a tad more attractive than the Asus EeeTop or MSI Wind Top AE2220. 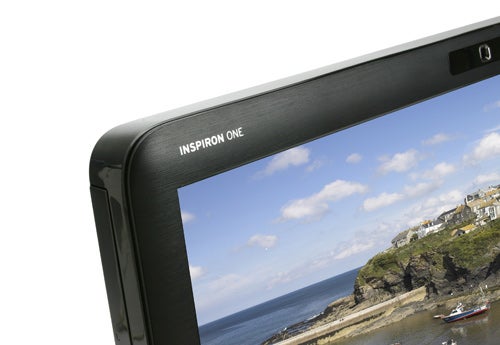 Mainly, this is achieved by a black plastic bezel that sports a faux brushed metal effect, rather than the usual glossy finish that’s, like, so 2010. Underneath this we have a gunmetal grey speaker grille that’s not disfigured by buttons or logos, and the whole lot is surrounded by a piano-black trim which contrasts nicely with the matt back.


In a rather nice touch, the One 22 is lifted about 4.3cm off your desk on transparent, tapering plastic feet, with a similarly see-through leg at the back allowing some tilt adjustment – though adjusting this isn’t exactly an easy task, with rather a lot of force required. Build quality throughout is solid, though there’s the occasional hint of creak. 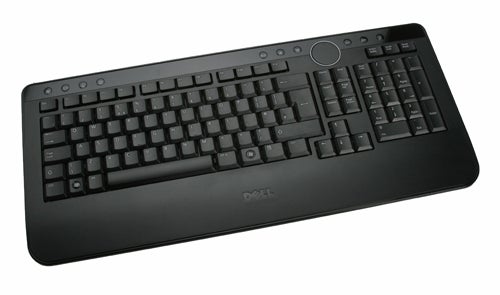 Dell includes a wireless mouse and keyboard with the 2205 model of the Inspiron One 22. These are in fact the exact same set that came with the Dell Inspiron Zino HD, and as bundled peripherals go are fairly decent. Both run off AA batteries which are easily replaced with rechargeables, and they both connect to a single USB receiver which can be hidden at the back of the PC. 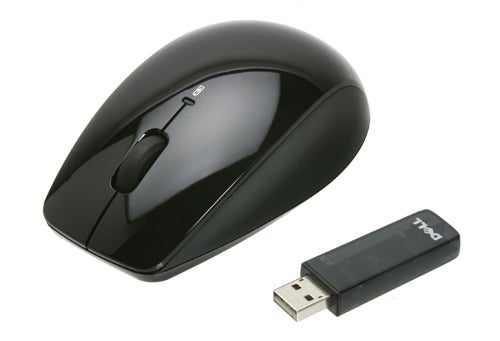 The keyboard has a neat and fairly standard layout, though the Page Up/Down key cluster layout is rearranged to be slightly narrower than usual. Key feedback is soft but well-defined, and the matte surround extends to offer a comfortable palm-rest. A glossy strip along the top houses application shortcuts to the left and media controls to the right. Our one complaint was that the volume wheel on this particular keyboard sample was incredibly stiff, making it a pain to use. However, based on past experience this is hopefully a one-off.


While far glossier than we would like and as basic as it gets, the ambidextrous mouse is fairly comfortable thanks to its ergonomic shape, matt sides and rubberised scroll wheel. On its base you’ll find a resync and handy on/off button. 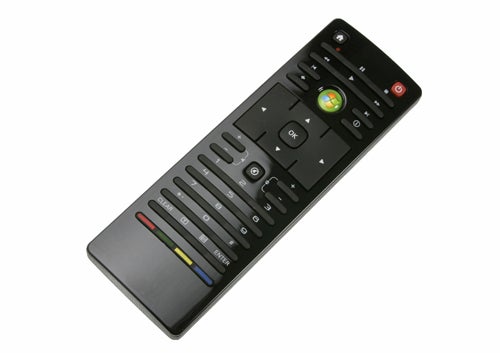 The Windows media remote likewise sports a glossy finish that loves fingerprints, and uses less common button-cell batteries. Otherwise it lies well in the hand, and its logically-laid out, rubber buttons are comfortable and responsive.

Moving on to audio, the speakers are decent, if not in the same league as those found on the MSI Wind Top AE2220 Hi-Fi. They produce reasonable levels of clarity and depth, and trebles are handled without significant issues even at their fairly loud maximum volume. However, bass resulted in noticeable distortion so you’ll need to keep the volume down to about half. External speakers are still highly recommended – but not required – for movies, and music is a no-go if you’re discerning. 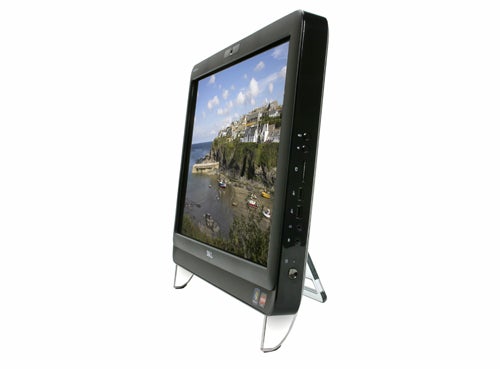 A decent screen is an essential requirement for an AIO PC, especially when – as is the case with this Inspiron One 22 – you can’t connect external displays. Thankfully, once you get past its reflective glossy finish the 22in example here is rather good. It’s still a TN LCD panel, so its vertical viewing angles are inevitably poor, but horizontal viewing angles are excellent. Combined with great contrast that will let you see every last bit of dark detailing, it’s attractive for gaming and movies both.


Sharpness is also excellent, no doubt helped by the small dot pitch resulting from stuffing a Full HD/1080p (1,920 x 1,080) resolution into its relatively small size. Furthermore, colour and shading gradients were smooth without noticeable banding and there was no sign of other unwanted artefacts. 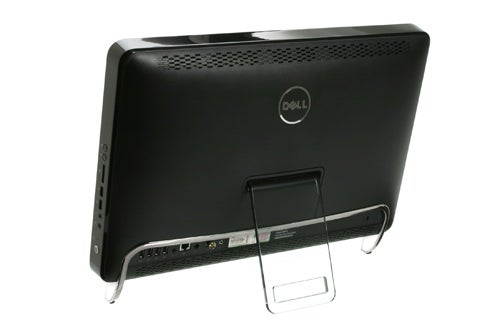 In fact, our only real complaint regards slightly uneven backlighting, with some bleed in the bottom left corner which you may spot when watching a film in a darkened room.


There’s no touch sensitive layer to dull the picture on this screen, as Dell has gone for the same optical touch-sensing system which we’ve seen many times before. Sensors in the bezel pick up on any object – whether this is fingers, styli or bananas – that comes within half a millimetre of the screen’s surface, and it works very well. The only real disadvantage is that it only supports two simultaneous touch points.


It’s well-established that Windows 7 isn’t designed with touch primarily in mind, and to counteract this most manufacturers provide their own touch interface for a selection of basic tasks. Dell provides Stage, which takes the shape of a strip somewhat reminiscent of the taskbar in Mac OS. 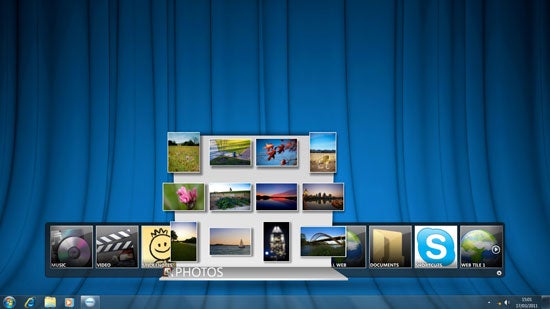 A single touch on an icon brings up the contents of that folder or various options of that program, which is a nice… erm… touch. However, we can’t say it worked particularly well overall. In the photo application, for example, flicking between images is a pain. Also, the buttons for minimizing and closing the application are not large enough and too close together, faults we really wouldn’t have expected from Dell.

When it comes to performance, the dual-core, 3GHz AMD Athlon II X2 250e CPU certainly holds its own, especially against the Intel Core 2 Duo processors still to be found in much of the competition at this price point. For many users, there simply won’t be any need to go for one of the more expensive Core i3 or i5 options.

Unfortunately, all but the most casual gaming is pretty much out of the question, with the AMD Mobility Radeon HD 5470 managing a pretty uninspiring 17.3 frames per second (fps) average in Stalker: Call of Prypiat – and that in DirectX 10 mode, with detail turned down to medium and resolution at a sub-native 1,366 x 768 pixels. Just to put that into perspective, the AE2400‘s Radeon HD 565v managed 25fps at the same settings but with the resolution cranked up to 1,920 x 1,080. 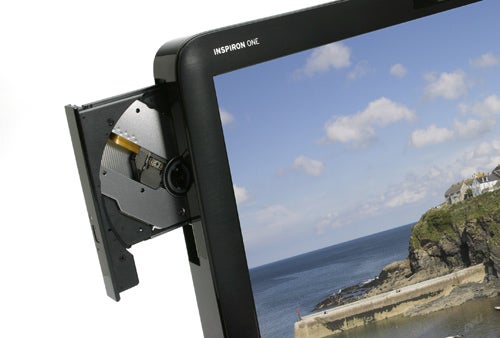 When it comes to value, the £630 Inspiron One 22 holds up pretty well – but it’s worth remembering its limitations, especially in regards to connectivity. Only if you’re sure the initial, non-upgradeable specifications match your intended usage, and that you won’t want to hook up a console or netbook to its screen, is it worth considering this AIO. In that case, it’s one of the more affordable options offering touch, a Full HD screen, built-in TV digital tuner, 4GB of RAM and a 500GB hard drive, not to mention wireless peripherals and a remote. 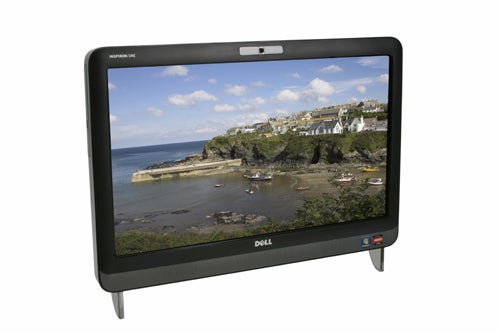 If you do want to take things up a step, the Inspiron One 23 offers an Intel Core i5 CPU, 6GB of memory, 1TB hard drive, better graphics and a Blu-ray drive in addition to its slightly larger screen, which might well be worth the extra £260 it costs. At that price point though, Dell begins to compete against the high-end offerings from the likes of Lenovo, HP, MSI and Samsung, all of which offer superior connectivity.


The Dell Inspiron One 22 has a lot to offer, including a stylish all-in-one design, fairly impressive Full HD screen, reasonably generous specifications and wireless peripherals. However, its severely limited connectivity dampens the mood somewhat, especially since it means you won’t be able to use that rather nice screen with any external devices nor hook up fast external storage. If this is not something that matters to you, then it’s a good value buy in the generally overpriced all-in-one PC market.