It’s a little depressing sometimes to think how little progress has been made at the low end of the netbook market. Atom has gone dual-core and can now just about handle 720P video, but the value of this is limited as you still get a sub-HD screen and VGA output. That aside, it will still struggle with any kind of intensive workload. Essentially, if you’re unwilling to spend £400 and upwards for the likes of the Asus Eee PC 1215N, specifications and performance on your average netbook are unlikely to be a big step up from the Acer Aspire One D150 we reviewed two years ago. 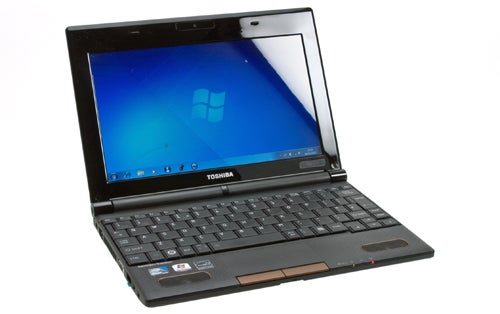 
For physical connectivity we have an equally disappointing line-up, with the usual three USB 2.0 ports (one of which offers Sleep & Charge), Ethernet for networking and analogue VGA for video, with 3.5mm headphone and microphone jacks for audio. A memory card reader discreetly hidden away at the front supports SDHC but not the newer SDXC standard, unlike Asus’ netbooks. Despite the lack of HDMI being due to chipset limitations, we’re also dismayed by the absence of USB 3.0. It’s a good thing, then, that this netbook is likely to make you forget all about its weedy specs and connections the moment you clamp eyes on it.

Ever since Toshiba’s original NB200, the company has been at the forefront of netbook design. The NB500-series refines this already attractive DNA further, tucking in the older model’s protruding battery and making the keyboard truly edge-to-edge. The finish and colour combinations have also received an overhaul and, as we saw in our NB500, NB520 and NB550D preview, it will be available in red, blue and green in addition to the brown model we have in for review.


Even with the netbook closed, it immediately sets itself apart from the crowd with a lovely, dimpled soft-touch finish on its lid. This is not only more rugged and fingerprint-resistant than the regular glossy abominations, but also makes it far nicer to hold and gives you a better grip. 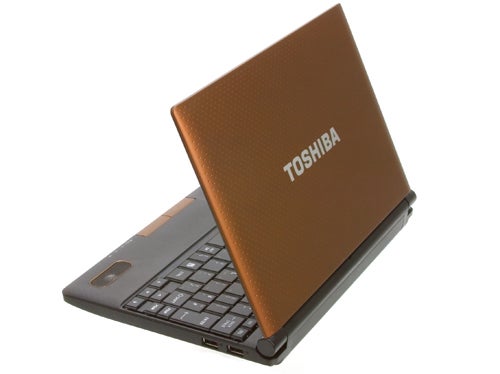 The bronze brown of our model’s lid complements the black inside and base rather nicely, and is enhanced by the touchpad buttons and narrow speaker grille surrounds in a matching colour. The rest of the netbook is finished in a mixture of glossy and matt black plastic, while the palm-rests sport the same soft, dimpled texture as the lid.


Build quality is solid throughout, with only a slight bit of flex on the lid. In fact, the only non-rugged netbooks we can remember feeling as solid are the Samsung N310 and, more recently, the Lenovo ThinkPad X100e. Essentially, the NB520 feels and looks more premium than its basic specifications and sub-£300 price would suggest.

Thankfully, the NB520’s excellence continues with its ergonomics. Though visually identical to the cheap keyboard on the Toshiba NB250, the example provided here is in a whole other league. There’s not even the slightest hint of flex or rattle, and though keys are just a tad stiff and feedback is on the shallow side, they nonetheless offer a positive click. 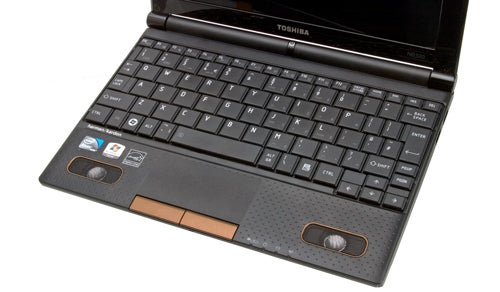 Toshiba has used the available space to maximum effect so that most of the keys are nearly full-size. Combined with the soft wrist-rests and the slight angle given by the battery, it makes for a very comfortable typing experience. It’s certainly one of the better models on the market in this regard, exceeded only by the HP Compaq Mini and Lenovo ThinkPad X100e.

The touchpad is perfectly placed to avoid being accidentally manipulated by your palm while typing. It features a slightly rough texture that’s less pleasant than its soft-touch surrounds, and we wish Toshiba had found some other way of differentiating it. However, it’s still eminently usable and large enough for multi-touch, while its individual buttons are as close to perfect as it gets.


With much being made of the integrated Harman/kardon speakers, we were eager to see if they lived up to the hype – and as it turns out, they do, and then some. They can fill a small room with their maximum volume, at which they provide more clarity, depth and even bass than you would expect. More significantly, unlike the recently reviewed 17.3in Asus N73Jn with its Bang & Olufsen audio, there’s little sign of distortion.

The only possible issue we have is with their placement. As you can see in the pictures, Toshiba has gone the unique route of integrating its speakers into the netbook’s palm-rests, allowing them plenty of room, depth and unhindered output – except, obviously, if you’re resting your palms on them. While we agree with the company’s argument that no-one will be using the keyboard while watching a movie, with speakers this decent, listening to music while typing hardly seems an unlikely scenario. Still, this niggle aside, the NB520 is not only the best-sounding netbook we’ve ever heard, but also puts many multimedia laptops to shame.


Naturally, this netbook’s 10.1in screen was never going to be as good as its speakers, but it actually holds up well enough. We’re really sick of seeing a sub-HD, 1,024 x 600 resolution, which means lots of extra scrolling and doesn’t let you appreciate the 720p video the netbook can actually handle, but this is a problem most budget netbooks share. The panel here suffered from no light bleed or artefacts and, at the ideal angle, offered relatively deep blacks, good contrast and punchy colours, thanks in part to its glossy coating. 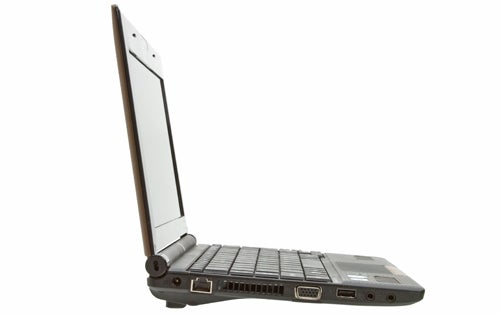 However, there are a few significant downsides. The gloss finish causes annoying reflections with any ambient light present, the ideal viewing angle is quite narrow due to significant contrast shift, and there is an odd, almost pixelated effect reminiscent of the AMOLED screen technology found on the likes of the Samsung Galaxy S – despite the display used here being of the ordinary TN variety.

One feature unique to Toshiba’s new laptops is Sleep & Music, which lets you hook up a device to the netbook’s microphone input and output audio over its speakers, even when the machine in question is turned off. However, it might have been nice if the manual mentioned that both this feature and Sleep & Charge need to be enabled in the BIOS. The drain in battery life is minimal, however, with 20 minutes of playback only taking a single percent. However, we weren’t overly impressed by the quality using this analogue connection, which was noisier than playing the music directly from the netbook. 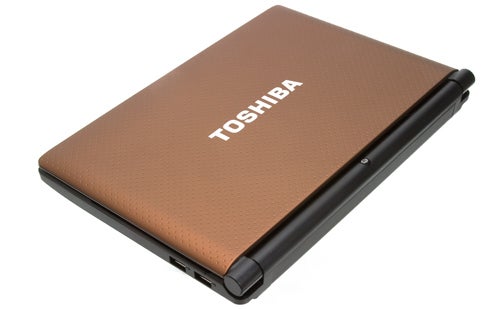 Performance on the NB520 was about what you would expect, with the dual-core Atom doing a decent job of light multi-tasking. 720p video isn’t a problem, especially when using a player that supports graphics acceleration to help the CPU along, but Full HD is out of the question, as is any kind of high definition Flash video. As ever with affordable netbooks, if you just want a small, light machine for browsing the web, undemanding productivity and standard definition video, it does the job just fine, but it’s no ultraportable.


In use the NB520 stayed reasonably cool and quiet even under load – at least most of the time, as sometimes the fan would rev up to become quite audible. We guess this is the price you pay for its slim body and lightness (just 1.25kg with battery).

As it turns out, Toshiba’s 10-hour claims at the launch event weren’t that far off the mark. In our looped video test with the screen at 50 percent brightness and wireless radios turned off, the NB520’s 61Wh battery managed a very impressive seven and a half hours, knocking it into the top of its class for longevity when away from a socket.


When it comes to value, we’re glad to see that the NB510’s premium finish and audio haven’t resulted in a significant price premium, as this netbook is already available for £280. In addition to its premium features, its light weight, excellent build, good ergonomics and long battery life make its restricted performance and connectivity far easier to swallow. 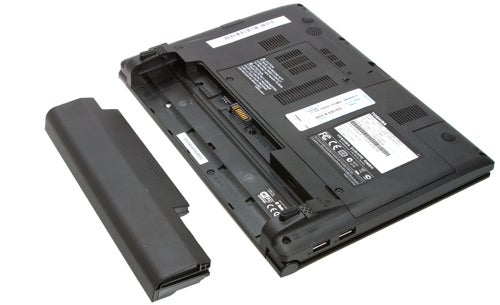 An apt comparison would be with the Samsung NF210, which is another stylish but basic netbook offering long battery life, and has significantly dropped in price since its review, undercutting the NB520 at £270. However, not only is it not as rugged as the Toshiba, its ergonomics aren’t as good and its speakers not as impressive, meaning we would happily pay the extra.


The NB520’s greatest enemy is perhaps another new Toshiba netbook, the AMD Fusion-based NB550D. For only £20 more, you get a nippy C50 dual-core processor with far superior graphics, thus allowing smooth Full HD and Flash HD playback as well as a little light gaming, and there’s an HDMI port thrown in to output it all to your TV. However, it’s not likely to be as easy on the battery, so we’ll see how it compares when we get one in to review.


Toshiba’s NB520 might sport the same basic internals, screen and connectivity as most budget netbooks, but its rugged, stylish design, comfortable ergonomics and excellent battery life – combined with speakers that put many laptops to shame – mean there’s still plenty to like. If you can live with its limitations, it’s one of the most attractive netbooks around.