Just as the iPad 2 rules the tablet landscape despite promising competitors like the Asus Eee Pad Transformer, and the MacBook Air remains the undefeated thinness champion over rivals such as the Samsung Series 9 900X3A, on the desktop side of things, Apple’s iMac range exemplifies the most stylish and slim all-in-one desktop line on the block.

This is hardly surprising, considering iMacs sport a slim, sexy look that’s all solid, edgy aluminium and sleek black lines. It’s a design that has been class-leading, if not without its flaws, since it was introduced on the 20in iMac all the way back in 2007. Thankfully, since then internals and connectivity have been updated several times. We’re looking at the latest refresh, which brings Intel’s quad-core Sandy Bridge CPUs, Radeon 6000M-series graphics and Thunderbolt connectivity to the older, 2010 iMac. Join us as we find out whether this makes for the ultimate all-in-one desktop machine. 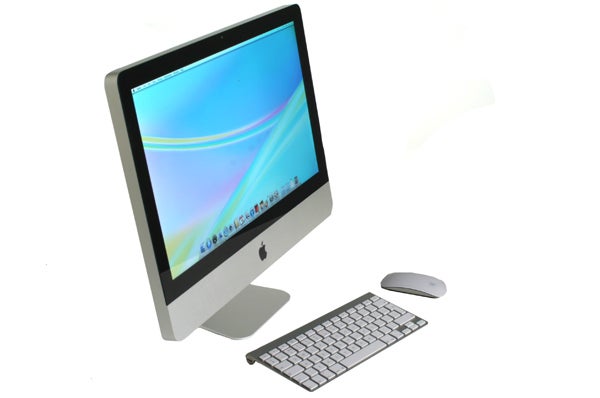 On the outside, almost nothing has changed. The seamless front consists of the frameless screen, elegant black bezel with matching Apple logo, and aluminium base section. The sides, back and stand are sharp-edged, attractively curved aluminium, which looks fantastic.

Using machine-cut aluminium, and a physical build Apple has had several generations to perfect, it’s not surprising that build quality is superb. Even the screen is protected by a layer of glass. Quite simply, it’s the best-built all-in-one PC money can buy.

There are a few minor downsides though. Its sharp edges can make the screen uncomfortable to hold, move or carry. More importantly, there’s no height adjustment, as found on the recent HP TouchSmart 610, though at least there’s a generous amount of tilt and this adjustment is effortless. 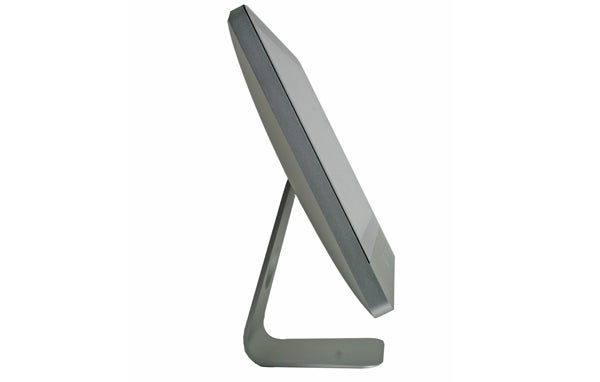 The glass front, while very attractive, is also ridiculously reflective. Thus, in an environment with a lot of ambient light it can be next to impossible to make out dark material on the screen. However, if these niggles don’t bother you, the iMac is still the most elegant and streamlined all-in-one (AIO) around.

Along with the upgraded internals, connectivity is another area where things have taken a significant step forward. Along the right edge, Apple has incorporated the usual memory card reader and slot-loading DVD-rewriter. The card reader takes SDXC, so it’s well up to the latest standard. However, for those hoping that – this time around – they would finally get in on the high-definition movie action with a Blu-ray drive, dream on.

Frankly, this is one of the iMac’s major remaining failings. After all, it’s all very well for Steve Jobs to decide Apple users don’t need or want Blu-ray in their machines, but we’re sure there are quite a few who disagree – especially since its IPS-panel screen makes for nicer viewing than most rivals (excepting the aforementioned HP TouchSmart 610, which also uses IPS).

At the back, there are 3.5mm headphone and microphone jacks (doing double duty as optical digital audio in and out), four USB 2.0 ports, a FireWire connector, Gigabit Ethernet jack and that magical Thunderbolt port, here in the shape of a mini DisplayPort connector. Thunderbolt (formerly known as Light Peak) can use a connector that’s physically identical to that of this graphics standard, but in addition to DisplayPort’s impressive video capabilities it also gives you an independent data link, making it a USB 3.0 alternative.

For more on USB 3.0, read our article: What is USB 3.0 and do you want it?. The advantage to Thunderbolt is that it offers a whopping 10Gb/s bi-directional transfer rate, but USB 3.0 is – for now and the near future – far more prevalent, and backwards compatible with USB 2.0. However, for the first time since FireWire’s glory days, we can now finally say that Apple offers a fast connectivity standard for external storage, even if there are very few compatible devices as yet. 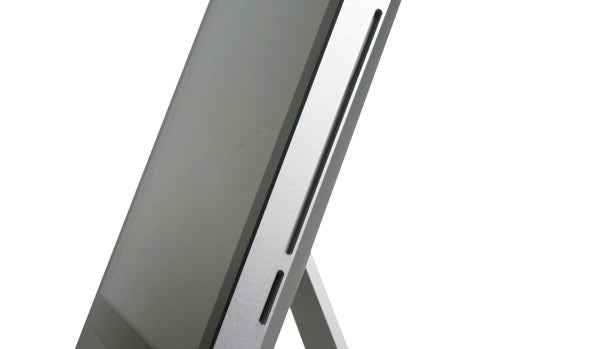 On the wireless front, we’re given both Wi-Fi N and Bluetooth 2.1 EDR.

The screen is a 21.5in affair with the Full HD (1,920 x 1,080) resolution you would expect from this size, giving you plenty of desktop real estate and letting you watch 1080p videos in all their detail. It features the almost-flawless viewing angles, accurate colours and decent contrast an IPS panel provides, making for an excellent overall viewing experience if you can get past the reflective glass layer. However, the competition is catching up here, with the TouchSmart 610 once again providing an apt comparison with its larger, 23in IPS panel.

If you want more resolution and an even larger screen, Apple’s 27in iMac remains unmatched. Essentially the Apple Cinema Display 27in with a computer built-in, its 2,560 x 1,440 pixel resolution will give you more pixels than your computer might be able to handle. If the screen is your primary concern, it’s also worth noting that the first-generation 27in iMac (with a Core 2 Duo processor) can now be had for under £900, £100 less than the cheapest current 21.5in iMac. 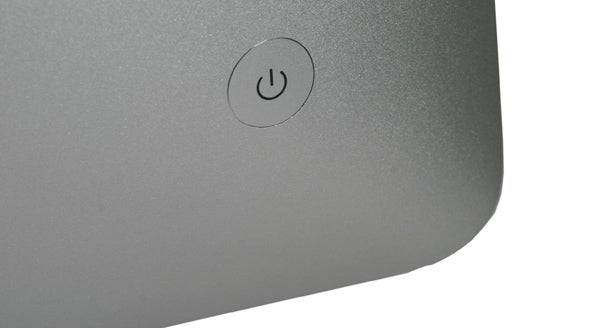 Another area where iMacs have always been strong is on the audio front, something the latest update certainly doesn’t change. Quite how Apple manages to squeeze so much volume and bass from the iMac’s thin frame and 17watt, down-facing stereo speakers is beyond us, and though clarity is a little lacking, for general entertainment you don’t really need external alternatives.

Unsurprisingly, the processor speed in your iMac will depend on which model you decide to go for. In the 21.5in range, the £999 base model sports a quad-core Core i5 2.5GHz and AMD Radeon HD 6750M graphics. Our £1,249 review sample ups this to a 2.7GHz Core i5 and Radeon HD 6770M. Though Apple doesn’t give out the specific CPU model names, we assume it’s the i5-2500S, which has a Turbo Frequency (the maximum clock speed it can run at when not all of its cores are in use) of 3.7GHz. The system achieved an Xbench score of 271, which is not too shabby.

Quite frankly, any Intel Sandy Bridge quad core CPU should be perfectly adequate for even demanding users, especially as Mac OS tends to be a little more efficient than Windows 7.  However, if you do regularly run CPU-intensive software such as video encoding solutions, there’s the option to upgrade to a 2.8GHz Core i7 with up to eight virtual cores for an extra £160. 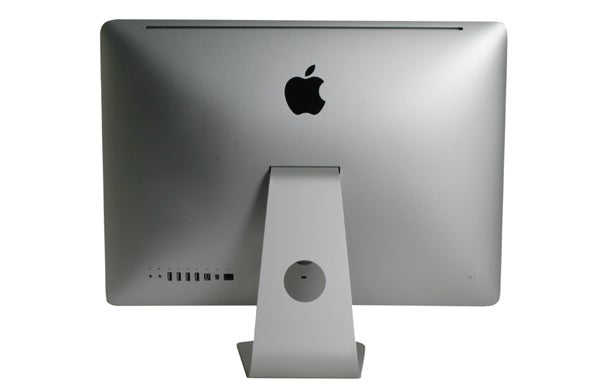 The graphics hardware is essentially mobile chip, as suggested by the ‘M’ behind the 6770 model number. I features 512MB of memory and is non-upgradeable – if you want better graphics, you’ll have to plumb for the top-end, £1,650 27in iMac, which gets you a 6970M. Getting back to the 6770M in our review model, it should be just about adequate to play many of the games available for Mac at decent detail settings on the screen’s native 1080p resolution. We tried a game of First Person Shooter CounterStrike: Source on maximum detail and got a silky 65 frames per second average, though newer and more demanding titles won’t run as smoothly.

All iMac models come with 4GB of DDR3 RAM as standard, which should again be plenty for most consumers, though you can upgrade to 8GB or even a whopping 16GB for a frankly ridiculous £480. If you need lots of memory on a budget, Macs are not the way to go, as for that upgrade price alone you can buy an entire working PC with an equal amount of memory! 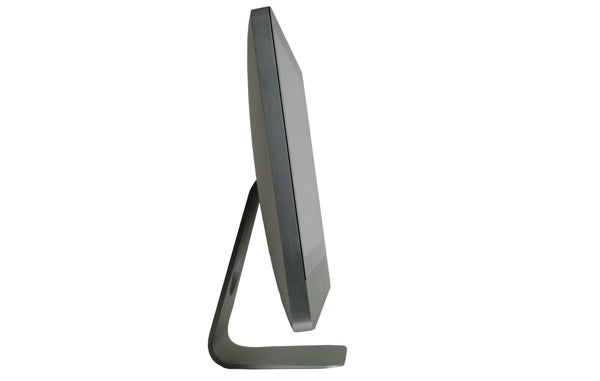 Things are rounded off by a 720p webcam – or in Apple parlance, FaceTime HD Camera – to accompany the discreetly integrated microphone.

Everyone who has used an iMac in the last few years will be familiar with the bundled wireless peripherals. First, we have the Apple Magic Mouse, a simply horrid ambidextrous peripheral. Though its touch surface is kind of cool, it’s not nearly as comfortable as a regular scroll wheel. Worse, the mouse’s shape provides no support for your hand whatsoever, and it has sharp edges at the sides which make anything but the most casual ‘claw’ grip distinctly uncomfortable.

We would recommend that you go for the Apple Magic Trackpad instead. It makes for an interesting partner to a less magical but more usable rodent like the Logitech LS1 Laser Mouse, which is available in Mac-friendly white.

The chiclet keyboard, on the other hand, is an absolute joy to use. You can choose between versions with or without a keypad, and either way it’s a neat, slim affair. Keys provide excellent feedback with just the right amount of travel and spring, and layout is flawless. We would happily type on it all day.

So how does the iMac compare to the competition? If you’re after Mac OS, it’s the obvious choice – unless you want to take the slightly grey route of installing Mac OS on a regular PC. Even for Mac power users, the new iMac is significantly more powerful and better connected than the Mac Pro, though not as expandable, obviously. 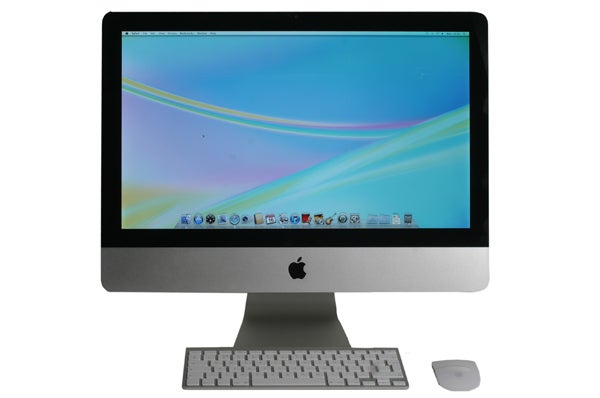 If you don’t mind which OS you go for, the choice becomes far less straightforward, with rivals like the HP TouchSmart 610 offering compelling alternatives. The 610 might not be as accomplished in the CPU or GPU departments but it’s still powerful enough for most users, and offers touch, Blu-ray playback, more storage, more memory, an integrated TV tuner, a larger screen, better adjustability, a remote control, HDMI inputs for hooking up consoles, and easier upgrades – all for £150 less. Do keep in mind though that it doesn’t come close in style, build quality or slimness, so it’s by no means a clear-cut decision.

Apple has gone the route of “if it ain’t broke don’t fix it”, keeping the beautiful chassis of earlier iMac models in this latest refresh. The addition of Intel’s ‘Sandy Bridge’ internals combines with Thunderbolt connectivity and niceties like an HD webcam to bring these stylish all-in-ones to the cutting edge, finally catching up to high-end Windows equivalents while retaining the killer look that keeps it ahead of the crowd. However, it also retains many of the iMac limitations (including the lack of a Blu-ray drive and easy video inputs), and buying a Windows-based all-in-one will still get you more flexibility while demanding less from your wallet.