If you’re after a computer, there are three basic options. You can go for a laptop, which gives you the convenience of portability, but your maximum screen size will likely be 19in, and upgrade potential is very limited. You can go for a traditional desktop, which gives you lots of flexibility yet leaves you with a relatively messy separate monitor and main unit setup. Or you can go the all-in-one route, which like the laptop is a more restrictive option, but you get the convenience of a single relatively slim and stylish device with larger screen sizes. Today we’re looking at one of MSI’s biggest all-in-one (AIO) PCs, the 23.6in Wind Top AE2400.

The AE2400 is the oldest series in the company’s 23.6in range, which is why it eschews Intel’s newer Core i CPUs. However, it comes in several different configurations. At the high end you’ll get an Intel quad core Q9400s CPU and AMD Radeon HD5730 graphics. Our AE2400-020UK model is somewhat less impressive though, with a dual core, 2.7GHz Pentium E5400 taking care of processing and a Radeon HD565v (albeit still with 1GB of dedicated memory) for pushing around those polygons.


Other specifications remain identical, with 4GB of DDR3 RAM, a generous 1TB hard drive, and a 64-bit version of Windows Home Premium. Undoubted highlights are this AIO’s large, Full HD (1,920 x 1,080) screen with multi-touch support and an inbuilt subwoofer to add proper bass to its audio – which, if it’s anything like that found on the Wind Top AE2220, should be pretty spectacular. Unfortunately, while our test sample has a Blu-ray drive, most models available with this configuration sport a DVD-rewriter, so don’t expect high definition disc support unless you opt for the quad-core version. However, you do still get a Windows Media Center remote and wireless peripherals. 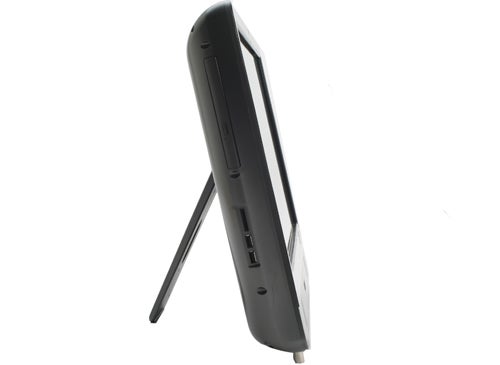 At just under 12kg this is by no means a light machine (the ”27in” Apple iMac weighs only 14kg), but then once it’s on your desk you’re unlikely to want to move it around much. It’s also very far from slim, at over 7cm deep, and comes with one of the largest power bricks we’ve ever seen.


Build quality is quite good, with only the slightest bit of creak when you press the body panels. Generally plastics are solid, and adjusting the PC’s angle is easy to do by simply pushing back and forth the hinged leg at the back. It’s not quite the elegant one-finger operation of an iMac but once set it stays pretty solid. 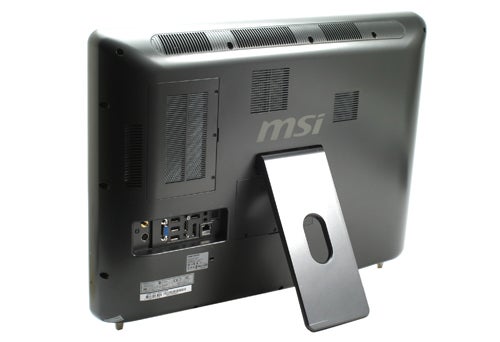 So far the AE2400 shares many characteristics with the smaller AE2220, but in terms of design we feel it’s a slight step up – though it’s certainly no iMac. The majority is still taken up by a slightly cheap-looking piano black bezel surrounding an equally glossy screen, but the speaker section below it (which was the ugliest element on the AE2220) is a single strip of brushed black aluminium. The MSI logo is also far more discrete, and the transparent plastic outer bezel is now gone, with classy chromed feet replacing it as support. The entire back of the machine, including the stand, is a semi-matte gunmetal grey.


The AE2400 is incredibly noisy at start-up, when all its fans run at full blast for half a minute. It’s generally quiet in normal use but does get audible under load. However, for material like HD video playback it remains inaudible.

Connectivity on the AE2400 is virtually identical to the Wind Top AE2220, which is a good thing. There might not be USB 3.0, but most other standards are catered for. Around the back you’ll find a recessed panel offering four USB 2.0 ports, eSATA and a Gigabit Ethernet port, as well as an antenna jack for the optional TV tuner card.

For audio we have 3.5mm headphone and microphone jacks (though we would have preferred these at the side) and a digital optical output for hooking up a surround sound system. For video we have a slightly odd combination of VGA out and HDMI in. The latter is what we really want on an AIO PC like this though, allowing you to hook up consoles and the like to its Full HD screen. 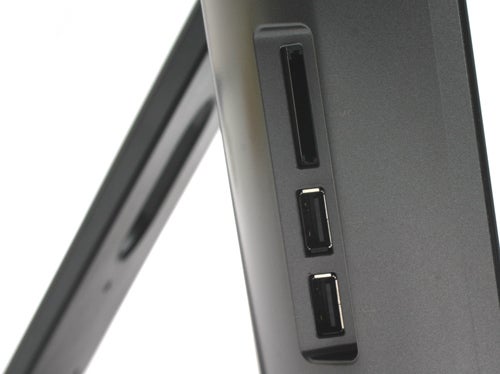 Along the left side we have two further USB ports and a memory card reader, as well as a tray-loading optical drive (as mentioned, this will probably be a DVD rewriter on the model you buy).


Nestled neatly between the screen and speaker sections is a row of white-backlit touch controls which are sensitive and well-spaced, making them easy to use. As well as controlling volume, calling up Windows Media Center and switching between two Eco modes, there is a monitor OSD with full control over settings like brightness, contrast, colour temperatures and even separate RGB colour control. This and the button that turns the screen off are features lacking on surprisingly many AIOs, so kudos to MSI for its comprehensive implementation.

The bundled keyboard and mouse are decent enough as these things go though definitely have a rather lightweight, cheap feel. The optical mouse is curved for right-handed operation and has two buttons in addition to its rubberised scroll wheel. On its underside it also has a connection button and on/off switch.

Due to indifferent styling and ergonomics, the generic Windows Media remote is not particularly pleasant to use but does the job, and uses twin AAA batteries. In other words, you can use rechargeable batteries for all the included peripherals.


Based on our experience with the Wind Top AE2220 we were hoping for a superlative audio performance from the 2.1 set here, and in many ways they deliver. Overall volume is plentiful, there’s more bass than you’d expect given their size, and detail is impressive. However, suprisingly it’s not quite as good as its smaller sibling and lacks the bass thump and finesse you’d get from a dedicated set of speakers. They should be adequate for a large majority of uses though.

By dint of using a TN panel and an incredibly glossy coating, the AE2400’s

23.6in screen is a bit of a mixed bag, though the overall impression is positive. Of course its 1,920 x 1,080 resolution gives you plenty of real estate to work in and is ideal for Full HD video. If you can get past the reflections it generates, that glossy finish also adds perceived richness to colours and enhances perceived contrast. Combined with decent greyscale differentiation, it makes for a pleasant entertainment display.

Viewing angles are unusual for TN in that there is almost no colour shift even if you view the screen from the side, though strong contrast shift prevents horizontal viewing angles from being best-in-class. Vertically, meanwhile, you only get a narrow ideal position. One final negative is some slight but noticeable light bleed along the top of the screen. Unfortunately, if you want a display with accurate colours, good contrast and great viewing angles suitable for image editing on an AIO, the 27in iMac is still your only choice, but compared to most other rivals this MSI comes out quite well.


These days it’s more common to find AIOs that support touch input than ones that don’t, and this MSI is no exception. It uses the same optical sensor system found in most of these machines, allowing you to interact with the screen using your fingers, the included stylus or indeed any other object (just make sure it doesn’t scratch the coating). It supports multi-touch and is very sensitive. 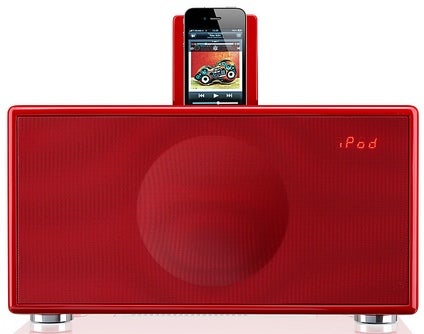 MSI has given its proprietary touch interface an overhaul, and it now looks less like a toy and more like a professional piece of software. It’s by no means as polished or sophisticated as HP’s TouchSmart interface, as found on the TouchSmart IQ810, but it’s nonetheless pleasant, easy to use and fairly slick. 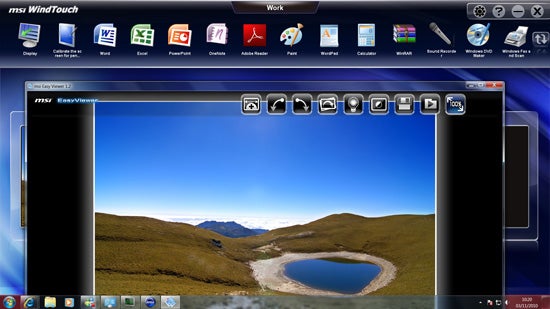 However, at best it’s a skin over an OS that is, at heart, simply not designed for touch interaction. We also maintain that, on any device you can’t put flat on your lap or desk, touch is (with a few exceptions) a fun gimmick, since it’s not only more accurate but also easier to just use a mouse and keyboard.


Performance-wise, the dual core 2.7GHz processor is more than adequate for what most users would ask of it, and – as you can see in our graph – outperforms the CPUs in previous AIO machines we’ve reviewed by a considerable margin. However, it’s not in the same league as the Intel Core i5 and quad-core AMD Athlon alternatives found in some rivals at similar price points, or indeed MSI’s own Wind Top AE2420 range.

On the gaming side, the AE2400’s Radeon HD565v will run older titles or more casual games at the screen’s native resolution, but for more demanding fare you’ll probably want to drop to 720p and lower the detail. To give an indication, Stalker: Call of Pripyat ran at a barely playable 25fps average on Medium detail at Full HD.


Finally, in the value stakes this £860 Wind Top doesn’t hold up nearly as well as the AE2220 did. For an extra £20, you can get a rival AIO with a similarly Full HD, 23in screen, newer generation Core i5 CPU, 6GB of RAM and a Blu-ray drive. Or if style is more your thing, the smaller (21in) Apple iMac is also available for under £900. 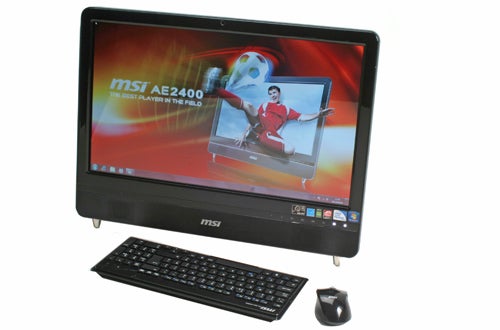 
Somewhat lacking in both features and power for its price, MSI’s Wind Top AE2400-020UK fails to live up to its predecessor despite a few impressive touches.