Available June 2 on PS4 (version tested), Xbox One and PC

Fighting games will always struggle to please their audience. For everything you need to include to ensure the hardcore remain entertained through the game’s lifespan, others simply want to hit buttons, see flashy images and be amused with only single-player content. It’s a tough balancing act, ensuring that the game is technical enough to allow for dedicated players to express themselves through the game’s systems, but also allow for instantaneous single-player fun.

It’s been a good five years since the last Tekken game, and even longer if you’re counting only the numbered entries. Tekken 7 has been playable in arcades, in tournaments and at trade shows since its release in Japan and South Korea in 2015, and anyone on the competitive scene already knows that it’s a grand fighting game. As a result, Bandai Namco has spent this time adding content that aims to provide a fulfilling experience, with some mixed results. 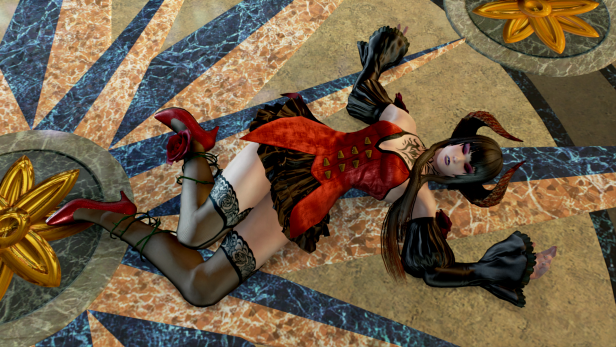 At its heart is Tekken’s classic fighting system, with each limb mapped to a face button and, for the most part, special moves performed with directional inputs alongside a button. It still satisfies, since there’s plenty to learn about every character to truly master them.

Different stances and positions unlock numerous moves, and understanding what is possible in any given scenario is a big part of the game, mixing up high, mid and low attacks to unlock your opponent’s guard and start a damaging combo.

The two new additions to the core combat are the Rage Arts/Drives and Power Crushers. A Rage Art is the new comeback mechanic – when you’re at 25% or lower health – and you can perform a Rage Art by inputting a simple two-button command (with most characters). Should the over-the-top first hit land, your character will perform a highly damaging and cinematic attack that gains more power the lower your health bar is.

They’re quite easily dealt with after you’ve seen them a few times, and provided you’re not just hammering buttons wildly, they’re easy to block, so you really have to catch an opponent sleeping for them to be effective. However, they’re easy to do and look good, so casual players will enjoy blasting their friends with them.

A Rage Drive is a little different. Activated in a similar way, it retains the properties of the Rage Art, but allows you to perform follow-up strikes should you use them in the correct manner – which varies across the roster of characters.

After a few hours of play, it was clear that although the Rage Arts are the more spectacular move, the Rage Drives tend to be more practical and far more difficult for your opponent to block.

Power Crushers allow you to absorb high and mid-attacks, blasting through them to deliver a strike of your own. Like Street Fighter 4’s ‘Focus Attack’ (with Akuma literally having one, taken straight from that game!), used strategically they’ll catch a button-happy opponent. 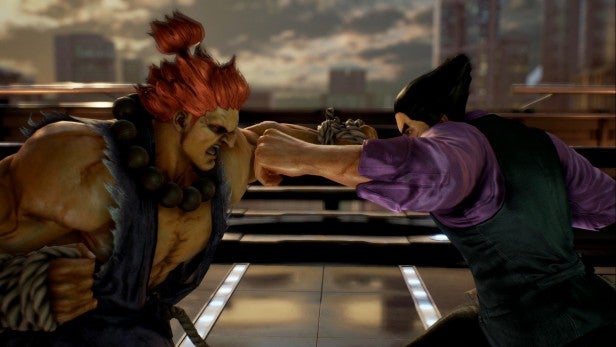 There are a few new characters making their debut in Tekken 7, all bringing a new fighting style to the table. Katarina fights in the savate style, while Lucky Chloe – the anime-inspired cosplayer – uses dance and acrobatics. Alongside other newcomers Shaheen, Gigas, Claudio, Josie and Master Raven, even the hardcore Tekken fan will have fun experimenting with their styles.

Of course, there’s Akuma – Street Fighter’s grumpy villain, who appears in Tekken 7 likely due to that surely-now-cancelled Tekken x Street Fighter deal. He initially feels strange within the rules of Tekken, with fireballs that can be sidestepped and bit more in the way of aerial attacks. However, he’s fun to play and is a good fit. It’s excellent to see some bread-and-butter Street Fighter combos working, even in the 3D space.

Capcom’s Street Fighter 5 received plenty of criticism for its launch content; with a year’s worth of patches it still remains short in some areas. Tekken 7, although definitely a more ‘complete’ package out of the box, isn’t really packing that much more. The marquee mode is the cinematic story – The Mishima Saga – that continues the tale of terrible parenting decisions made by Heihachi and Kazuya Mishima. It’s told from the perspective of a journalist called – and this isn’t a joke – Oscar Wilde, who is looking into their family history.

It’s daft fun and ties up many of the loose ends of this silly story, but purely from the point of view of play, this is just a series of cut-scenes and some scraps with either generic enemies or characters from the series (and an absolutely brutal final boss, which all fighting games should have!). 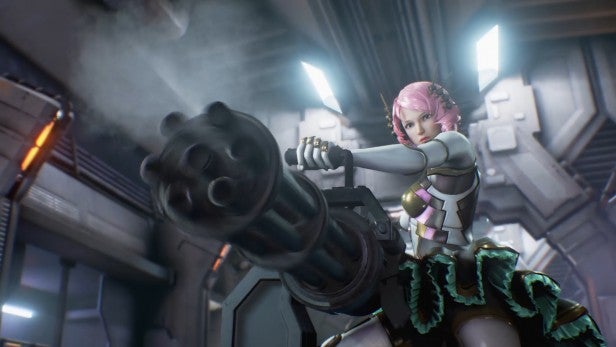 There’s an Arcade mode, which is little more than six fights against the CPU and, shockingly for a Tekken game, no endings to unlock on completing it. Finally, there’s the Treasure Battle mode, which is the pick of the bunch. Essentially this is an endless Arcade mode against increasingly more difficult opponents and some ‘special matches’ that require you to fight a boss character, or under a certain rule set, such as increased damage or at double-speed. Every win unlocks customisation gear for your characters, or fight money to unlock specific bits of content.

The customisation options are superb, ranging from some classic gear from previous games to some absolutely ludicrous get-ups. You’ve not lived until you’ve been hit by Akuma’s Raging Demon while he wears a pair of aviator sunglasses with a rubber ring around his waist.

Outside of those, however, there isn’t a great deal else. There are the offline and online versus modes and a practice mode, which, although as fully featured a practice mode that a player needs, lacks a real tutorial or ‘trials’ mode to guide new players into some of the basics.

Tekken has a reputation for being a bit of a button masher and there isn’t anything out of the gate that will convince most casual players that “look, there’s a bit more going on here, don’t just hit everything!”. It’s a missed opportunity, especially since Tekken 7 is, in every other way, a really good jumping on point for the series. 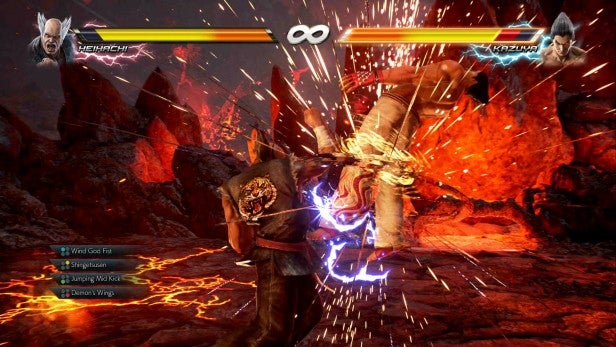 At no point, outside of a few lines of menu text, does it explain Power Crusher moves. It barely explains what a Rage Art is, never mind fundamental aspects of the Tekken system. If this is your first Tekken game, it leaves you hanging, and it becomes easier to see why people do mash buttons. In terms of showing new players the ropes, Guilty Gear and Killer Instinct go above and beyond; Injustice does a decent job; and Street Fighter does the bare minimum. Tekken 7 doesn’t even do that.

It’s a good job then that in the handful of online fights I played, the net code was wonderful. Solid and almost entirely lag-free, it bodes well for release. A particularly cool feature is the ability to make your own online tournament, which coordinates all of the entered players into the appropriate matches and sorts out the brackets for you.

A special mention has to go out to the frankly pointless PlayStation VR support. You can mess around in a vacant practice room, or view the character models. That’s it. No full matches, no interesting unique modes, not even a separate Tekken ‘experience’. Just the ability to take a look at Heihachi Mishima’s wrinkly face. It reeks of being a token addition – and you’re not missing out on anything should you not have access to Sony’s considerably priced and criminally underused headset. 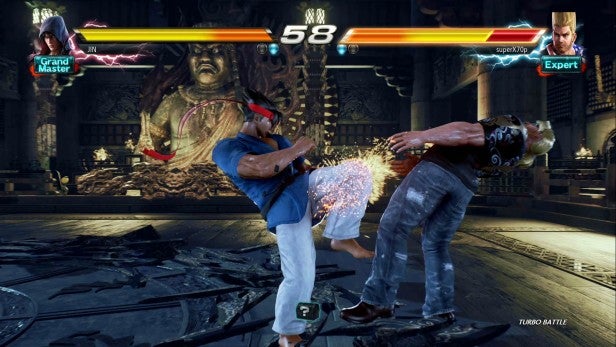 Tekken 7 is a load of fun for fighting game fans and newcomers alike, with Namco’s 3D fighting series still providing thrills and – crucially – a diverse selection of fighters who are rewarding to master. That’s something that will last long after you’ve finished up with the Story mode and the rest of the single-player content – and is the reason why the best fighting games have such a long lifespan.

For the absolute casual player, the recently released Injustice 2 is a better package. The cinematic Story and brilliant Multiverse provide the single-player fighter with more than enough reason to keep coming back. But Tekken 7 is the game that comes closest to truly satisfying both parts of the fighting game market.

The Story mode is daft fun, despite its short duration, and there’s an Arcade mode that apparently everyone wants in a fighting game, which alongside the Treasure Battle and customisation options make for a robust single-player experience for those who don’t ever fancy jumping into the online fights.

However, for those hardcore players there’s plenty to enjoy from the deep, rewarding and varied roster of characters, fully featured and seemingly lag-free online modes, as well as the refinements to the core combat that make Tekken 7 the best since Tekken 3.