Available May 26 exclusively on PS4

In 2017, the fighting game genre is in truly rude health. You can’t throw a Hadouken without hitting a legitimately brilliant beat-‘em-up these days, with every developer involved putting out something that could arguably be called their best work. Street Fighter, King Of The Fighters and Mortal Kombat are all notably good and relevant once again.

Confusingly, Rev 2 is the third iteration of Arc System Works’ Guilty Gear Xrd, following on from last year’s ‘Revelator’ update. Joining the roster are Baiken – the revenge-driven samurai from previous Guilty Gear games – and Answer, a brand-new character. He spends the entire fight on his phone, lobbing out deadly business cards like throwing stars. He’s a business ninja, of course.

The Story Mode, which features wildly over-the-top action, has received a new chapter, while some of the characters have gained some individual episodes fleshing out their roles. There’s also been a re-balancing of the roster, with some move properties being tweaked to buff and nerf a few characters, as well as some getting entirely new moves.

However, all this is only really going to appeal to the hardcore Guilty Gear fan – and they’re going to be buying this regardless, right? 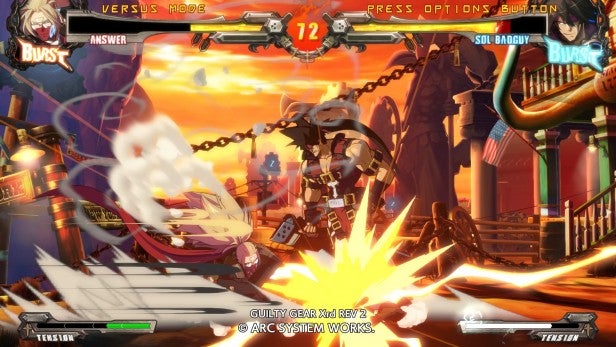 Which begs the question: with so many great fighting games currently available, and a few others on the horizon, why should you pick up Guilty Gear? It’s clearly a very accomplished and absolutely beautiful-looking game, with its crazy ‘looks 2D but actually 3D’ visual style and detailed animation, but what lies beneath?

You can double-jump, dash towards or away from your opponent in the air. You can block in the air and you can use your ‘Tension’ gauge to cancel normal attacks or perform cinematic instant kills, for example. There’s also a considerable variety of character archetypes, a few of them offering more unique ways to approach a fight within the entire genre.

If you’re coming to Guilty Gear with little experience, it can be a touch overwhelming, but to counter this the game provides a brilliant tutorial system that walks you through all of the basics and beyond. It also creates some great mini-games that are fun in their own right while discretely teaching you some key combat components. An obstacle course teaching the fundamentals of air-dashing, or popping balloons to learn jump-cancelling. There’s even a quiz about all things Guilty Gear, which has you punching your chosen answer to enter it! 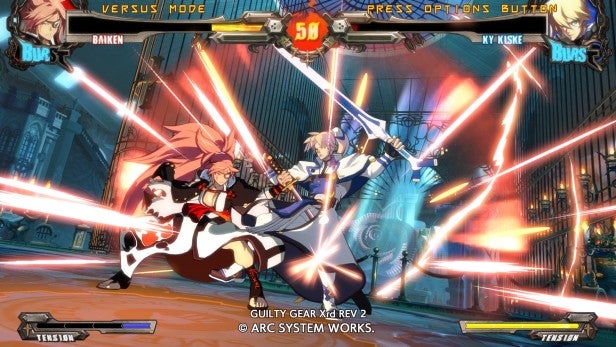 From simple bread-and-butter combos to lessons on advanced, match-up specific techniques, there’s a wealth of information, all presented in a more interesting way than any other fighting game.

However, Guilty Gear is fundamentally more complicated than its peers; there are several different ways to block, for example. So, despite these fantastic tutorials, there will be much for the newcomer to get their head around. Even fighting game fans will find Rev 2 overwhelming at times. With less memorable characters than, say, Street Fighter or Marvel vs Capcom, there isn’t a lure for the casual gamer outside of the amazing visuals or a desire to actually play Guilty Gear properly and learn it.

The Story Mode is an odd one, since it’s essentially a few hours (yes, hours!) of anime cut-scenes containing no actual fights – although it does have a traditional ‘Arcade’ mode, which tells the story of the characters leading up to the main Story Mode. The game isn’t as instantly satisfying for those just looking to mash buttons and watch the fancy stuff happen in the way of Tekken 7, for example, which makes Rev 2 difficult to recommend for everyone. Ironic, given how impressive the training tools are.

Guilty Gear continues to set a high bar for online lobbies in a fighting game, however. Essentially a ‘virtual arcade’, where players walk in with their avatars and sit at a cabinet and wait for an opponent. This allows for a party of players to come together in a central hub. All pair off and play games with each other, in a decent, charming interface.

During the game, the latency is shown in the top right of the screen to the exact frame – meaning you can simulate this in Training Mode and nail your most advanced combos online. It’s very impressive and, crucially, stable and lag-free for the most part. 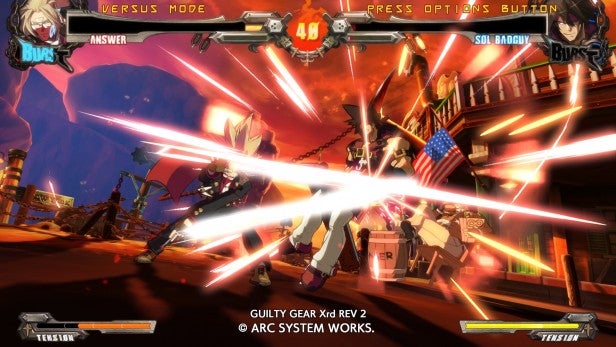 The two new characters are fantastic additions to an already great lineup – and although there isn’t a lot of major new content outside of them, Guilty Gear has always been a fighting game chock full of content. These games reward you with a versatile and interesting combat system, which allows you to express yourself in a way that many other fighting games simply don’t, should you be willing to put the time in.

Ultimately, Rev 2 leaves Guilty Gear in a weird place. It’s an absolutely brilliant fighting game, and one with a tremendous wealth of modes and a tutorial that puts most of its peers to shame. It is, in many ways, the best 2D fighting game on the market right now, thanks to the way it explains every aspect of its gameplay in a practical manner.

However, it’s a far tougher game to get into than, say, Street Fighter or Injustice – so although the tutorial is welcome, it’s likely to be existing fighting game fans who get the most out of Guilty Gear, as opposed to total beginners.

As an expansion, it’s basically two characters, extra story bits and a rebalancing of the roster, which will appeal to anyone who already plays Guilty Gear regardless. For newcomers, Rev 2 is the most complete Guilty Gear game to date – but be warned: this is a game you’ll have to put time into to truly appreciate. It’s a good job, then, that it provides all the tools necessary to do this.