This really is a game that a few years ago seemed an impossible dream. A lot has changed since the last Marvel vs Capcom game – Marvel is now one of the most bankable licenses on the planet and Capcom is, well, still Capcom. The franchise is loved by many but has repeatedly tested the faith of those who do.

Pairing Spider-Man up with, say, Arthur from Ghouls And Ghosts once again felt like a bit of a step down for one of the world’s most iconic superheroes.

Clearly something has happened behind the scenes and here we are with a new instalment in the long-running series. And it’s one of the best so far.

However, it’s clear from the outset that there are some of the same old issues. Thirty characters make up the day one roster and only a small amount are totally new to the series. The rest are from Marvel vs Capcom 3 Ultimate, almost directly ripped from that game – moves, animations and all.

“But that’s fine,” I hear you say, “most fighting games have returning characters!” This is true, but there’s something a bit uninspiring about the default lineup in Infinite, especially when there are a few true series classics missing. All of the X-Men are gone due to licensing issues, as well as others like Doctor Doom. Ultimately not a total dealbreaker, but it is an immediate disappointment that’s hard to shake. 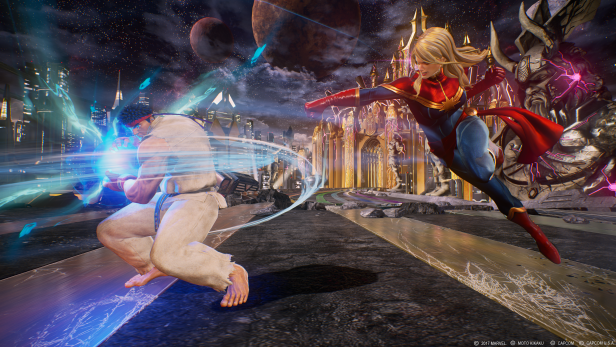 There’s just something about Marvel v Capcom: Infinite that feels a bit ‘cheap’. Visually it lacks the art style of something like Guilty Gear or, hilariously, the previous Marvel vs Capcom game, or the impressive graphics of Injustice 2, sitting somewhere between the two and never really blowing you away in the same way watching 30 seconds of Dragon Ball FighterZ does. The menus are barebones and the UI is, well, just a bit ugly.

It’s a good job, then, that most of these initial disappointments fade away when you actually play the game.

Every Marvel vs Capcom game brings a new mechanic to the table. This time around, ‘Active Switch’ makes the combat interesting. As always, you have light and heavy punches and kicks, as well as character-specific special moves to ‘open’ your opponent up – essentially landing a hit that you can, with practice, convert into a combo for as much damage as possible.

Active Switch allows you to bring your partner into the battle at any point, instead of during very specific instances in previous games. This allows you to not only tag in a partner to continue a combo, but to bring them in during a certain situation to try and confuse your opponent, or counter their tactics. It’s a system that has real depth and allows for a lot of flexibility in battle. You can even use some of your meter to perform a switch when you’re stuck in a combo – called a Counter Switch – which allows you to sacrifice some of your resources to get you out of a bind. 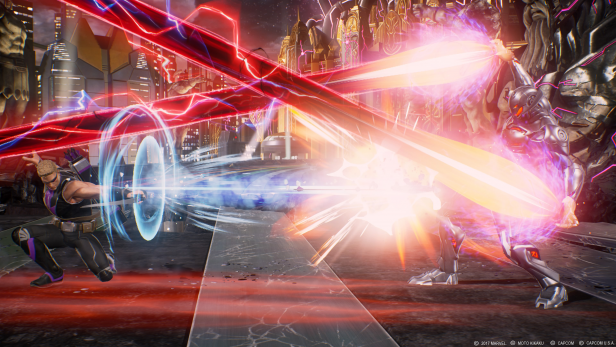 There’s also the six Infinity Stones. Each offers a unique ability that can be used at the touch of a button. For instance, the Time stone allows any character to do a teleport dash, useful for closing distance when being zoned out by projectiles, while the Power stone gives a guaranteed wall-bounce move, which is extremely useful when looking to extend a combo. When the Infinity Stone meter hits a certain threshold, an Infinity Storm can be used.

These give the player a very clear advantage while the meter ticks down. The Space stone is one of the more devious, as it places a box around your opponent and leaves them trapped inside, while the Soul stone will bring a downed teammate back from the dead!

These work really well with the new, more versatile combat and allow players to slightly tweak the way they place a specific character. A Hulk with a teleport to close distance or a Hulk who has a projectile attack? Spending some time working out which combinations work best in training mode is going to be important, with the payoff being some unique ways to approach match-ups.

Looking to avoid a lot of the same complaints that hit Street Fighter V, in terms of content that is available at launch, Marvel vs Capcom: Infinite has a Story mode as well as a traditional Arcade mode. The story pits you against Ultron Sigma, an amalgamation of the Marvel and Mega Man villains, who’s obtained two of the Infinity Stones and caused the two worlds to collide, allowing for some cute crossover moments between the two properties.

Seeing Dante and Rocket Raccoon bond over a shared love of firepower, or Ryu and Hulk beat the hell out of Dah’ren Mohran from Monster Hunter, is the sort of stuff fans will get a kick out of, but it’s really a series of disjointed battles that require you to play as characters you may have previously never considered selecting. 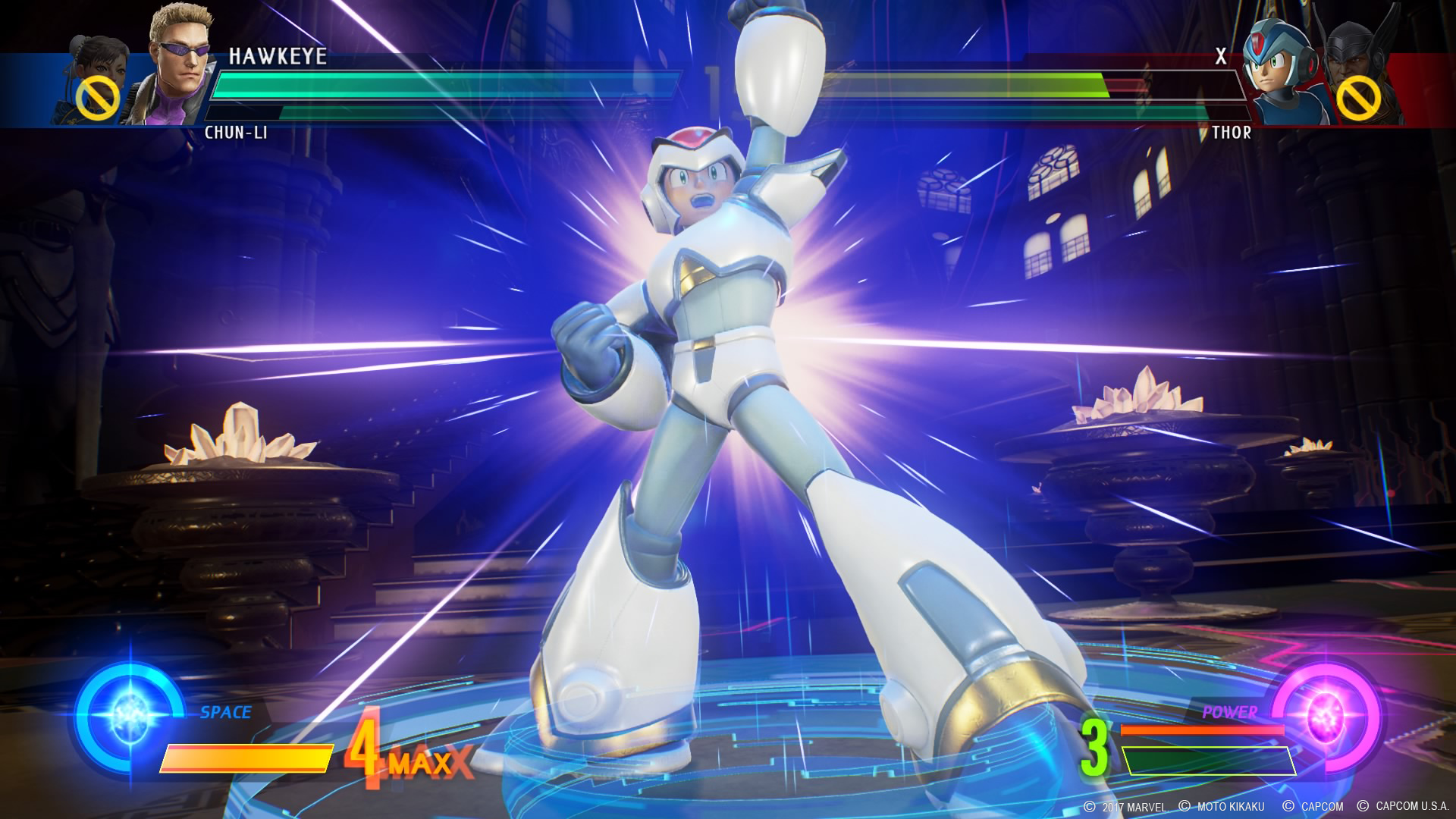 Arcade mode fares much better. A classic arcade ladder with a couple of boss characters at the end, it’s amazing how much fun can be had from such a simplistic mode. It provides a fair distraction from the grind of practice and competition, and represents a much more effective way of testing out combos than story mode does, if you’re not going to take them into the online arena. And speaking of those combos, there’s a fairly robust training mode, showing you the basics, the new systems and even 10 combo trials per character, which range from entry-level bread-and-butter stuff to some really useful advanced bits.

Ultimately, though, playing against another player is where the game should shine, should everything work as intended upon launch. It’s hard to forget that first month or so of Street Fighter V, where the whole online mode fell apart. Lobbies are much more advanced than the ones on offer in Capcom’s other premier fighting game, allowing for multiple matches to take place between all players currently in one, while the introduction of a Beginner’s League is a smart move in a game as challenging as this, allowing players still finding their feet a place to duel with one another.

Marvel vs Capcom: Infinite does have a few more concessions to beginner players, but not all as useful as the Beginner League. It is possible to turn on Auto Super Jump, which will send you airborne to continue a combo if you land a launcher on your enemy. You can also put on Easy Supers, which allow Super moves to be performed by pressing two buttons together, but only gives access to a specific one, not all of them. Finally, there’s Auto Combo. By simply hitting light punch repeatedly, you’ll perform a standard ground to air combo. It’s not optimal, of course, but means newcomers will be able to mash their way to some success, and certainly mash their way through the Story.

Thing is, none of these teach the player what exactly it is they should be doing without these assists, and don’t really encourage them to bother learning anything else. It’s part of fighting games’ never-ending struggle to bring new players onboard, allowing them to feel like they’re not completely rubbish but also teaching them how to get better. If you’re more of a Marvel fan who just wants to see the light show and play the story, these will prove to be helpful, but if you really fancy playing Marvel vs Capcom: Infinite online or against pals regularly, be prepared to switch this stuff off and hit up the training mode.

The game’s shortcomings in regards to presentation and roster can largely be ignored. A bigger issue, and one that wouldn’t be able to be fixed in a patch, would be if the game was just plain rubbish – and Marvel vs Capcom: Infinite is far from that. Much like Street Fighter V, when you’re sat next to an opponent of similar skill, it’s brilliant. That’s what fighting games are all about.

It’s a shame that it doesn’t have the visual fidelity or single-player content of some of its competitors, because it knocks the shine off what is otherwise a really fun, deep and varied fighting game. At its core, Marvel vs Capcom: Infinite is a game that offers a fresh spin on the series’ tag-based combat and, provided the online works upon release, is another top-tier fighting game.

If you’re into the genre, you’ve not had it this good in a while!