What is the TalkTalk Plus fibre router?

It is the premium router TalkTalk supplies to customers signing up for its 38Mbps and 76Mbps fibre broadband packages. Like the Sky Hub and PlusNet Fibre router,
TalkTalk’s Plus router is a single band 802.11n 2.4GHz model, which raises concerns it may struggle deliver Wi-Fi speeds that match the fastest connections – an issue the BT Home Hub 4 and Virgin Media new Super Hub
dodge by supporting the 2.4GHz and 5.0GHz bands.

Is the TalkTalk Plus fibre router up to the tast of delivering proper fibre speeds over Wi-Fi, or is it another underwhelming effort from a UK ISP?

Note: TalkTalk uses two suppliers for the Plus router, D-Link (model number
‘DSL-3780’) and Huawei (model number ‘H533’), but claims both perform
very similarly and look identical. We received the D-Link edition of the
Plus router so will refer to it as the 3780 in this review.

Want to upgrade? Head to our best routers round-up for our top picks. 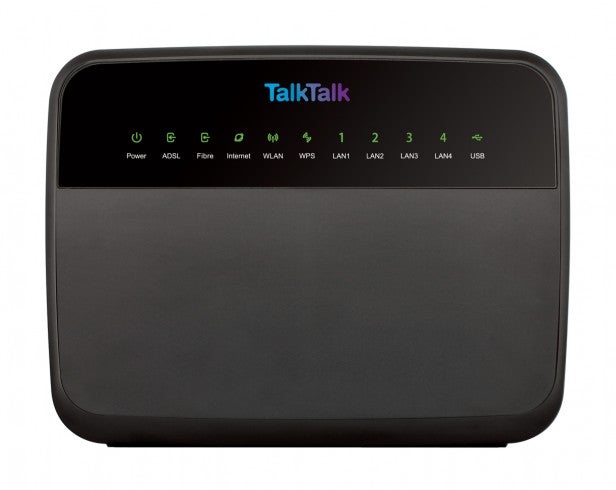 Out of the box things look promising. TalkTalk has previously spoken of its desire to provide customers with a more stylish router and the 3780 is a marked improvement on previous models. Out goes its predecessor’s glossy white finish, large garish TalkTalk logo and boxy angles to be replaced by a smaller, subtly branded, curvier, matt black unit. Admittedly we are still a long way from the stylish design seen in the sector’s flagships like the Linksys EA6700 and D-Link DIR-848L, but it is no eye sore.

It is also well-built. There are no creaks or squeaks and while we aren’t in the habit of throwing routers on the floor, it feels capable of withstanding a few drops. A moulded base stand means the 3780 can only sit bolt upright though and while this isn’t a major issue it does mean it cannot be wall mounted.

The 3780 also has 11 front facing activity lights (power, ADSL, Fibre, Internet, WLAN, WPS, LAN1-4 and USB) and while all of these won’t be flashing at once you would be advised not to place it in a common eye line. 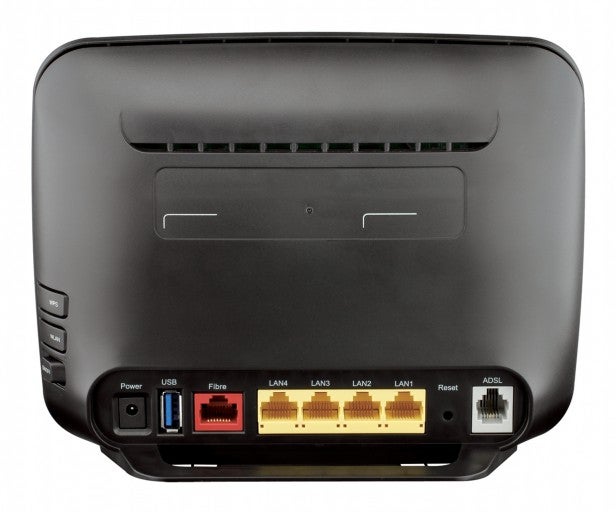 While the look of the 3780 causes no offense, much of its feature set does raise concern. The aforementioned limitation of 802.11n 2.4GHz WiFi is the most obvious talking point, but it doesn’t even come with the fastest implementation of 2.4GHz. As such it uses a 2×2 antenna array when a stronger 3×3 array is common in many single band routers including D-Link’s own excellent DIR-645.

In addition to this the 3780 fits four 10/100 Ethernet ports rather than the more common Gigabit (1000Mbps) Ethernet standard. This will be an instant deal breaker for users running NAS boxes as it creates a fixed bottleneck even for wired connections. IPv6 is also missing, though D-Link confirms the hardware is capable of being updated to support it in future.

Elsewhere we are pleased to see the 3780 supports WPA/WPA2 and WPS security and there is also a USB 2.0 port on the back for sharing a printer or USB storage across the network.

Interestingly, the 3780 packs both ADSL2 and Fibre internet ports. This adds flexibility but, like the PlusNet fibre router, really only shows that this is a bridging product (ADSL2 reaches just 16Mbps) rather than a router purely intended to do justice to the speeds of fibre optic broadband. Still this is better than the PlusNet Fibre router which had to commandeer one of its Ethernet ports just to support Fibre – a real botch job. 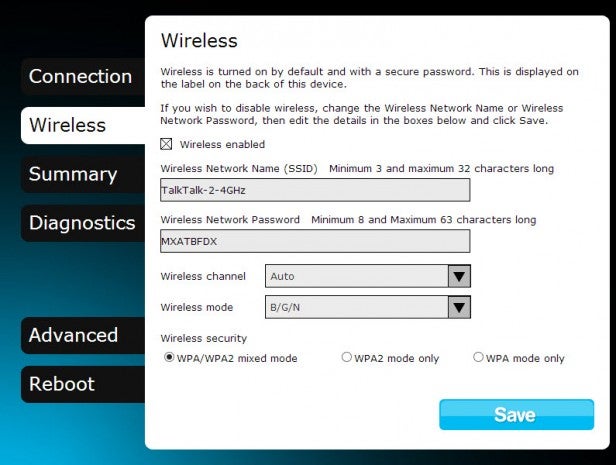 For technophobes TalkTalk supplies both a CD-based setup wizard and a manual which includes step by step graphical guides for Mac OS X, Windows XP, Vista, 7 and (impressively) Windows 8. Users will also be able to simply plug the 3780 in and connect to its Wi-Fi using the key printed on the back of the router.

Happily, WPA2 security is enabled default, but slapped wrists are in order for setting up the default username and password for the router’s settings as admin/admin. We thought we had long passed the days of this aged and easily guessed combo and they should be changed immediately… something we doubt many mainstream TalkTalk users will do.

For those who do dare to fiddle with the 3780’s settings, they will find not one but two UIs. By default the 3780 loads a simple TalkTalk status screen (shown above), but clicking the ‘advanced’ tab sees it open D-Link’s standard router UI in a new window (below). 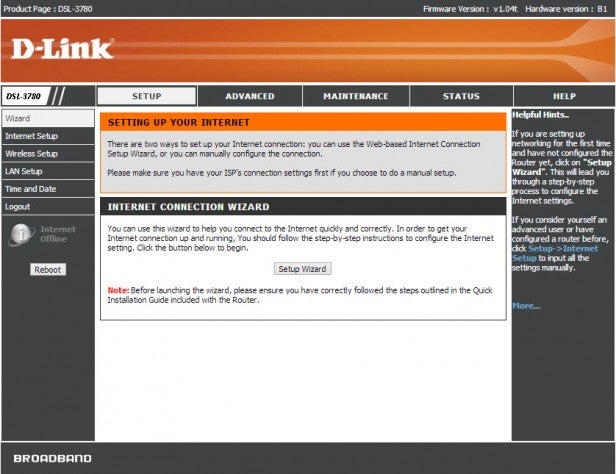 We weren’t expecting the smoothness of Linksys or D-Link’s premium Cloud platforms Smart WiFi and mydlink, but the effect is jarring and akin to jumping between the desktop and touch-friendly modes in Windows 8.