What is the BT Home Hub 4?
The Home Hub 4 is the somewhat overdue successor to BT’s ageing Home Hub 3 router released back in 2011. It brings dual-band 2.4GHz and 5GHz 802.11n wireless to the range for the first time – a long awaited move as the company’s fibre broadband speeds are increasingly rapidly.

After the positive impression made by the dual band Virgin Media new Super Hub and the decidedly iffy single band Sky Hub, how will BT’s latest and greatest router fair?

Looking for a third-party alternative? Read our best routers round-up.

Out the box the BT Home Hub 4 makes a very positive impression. The design is a subtle advancement of the Home Home 3 with a flat front and new silver base strip. It sits upright courtesy of spring loaded legs (which allow it to be packed flat) and the rear is well ventilated to stop the Hub getting hot. The entire casing is plastic, but that is the same for all routers as it lets wireless signal pass through easily.

Throughout the Hub 4’s design are a lot of thoughtful touches. Like the Hub 3, the back has a slide out card for the router’s admin and wireless passwords that makes it simple to take settings to different devices around the home. In addition, the Home Hub 4 has convenient large restart and WPS buttons on the top and the rear ports are colour coded with matching cables in the box.

Lastly the router’s activity lights are hidden behind the Hub 4’s black front strip, only showing up when in use. On the downside there are no activity lights on the Ethernet ports, which is always a bugbear. 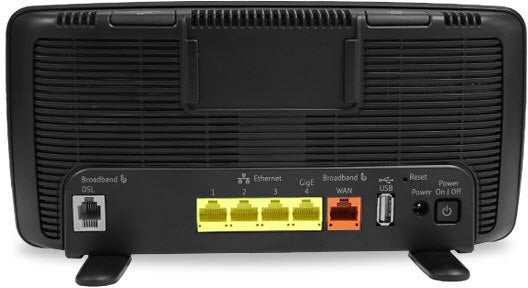 The highlight of the Home Hub 4 is its move to dual-band wireless n. BT uses 2×2 MIMO antennas rather than the 3×3 arrangement in premium third-party wireless routers, but it still represents a substantial improvement on the Home Hub 3’s single band 2.4GHz wireless n.

More curious is BT’s decision to fit the Home Hub 4 with the same 3x 10/100 Ethernet / 1x Gigabit Ethernet port combination as its predecessor. This is the first dual-band router we’ve seen not to embrace Gigabit Ethernet entirely and will be a significant letdown to those running local networks as it leaves just one viable port for high speed wired data rates.

Despite this the Home Hub 4 is reasonably flexible. It can’t double as a wireless bridge or access point (like the Asus RT-AC66U), but it does support both DSL and cable (WAN) connections. Interestingly, we found the Home Hub 4’s WAN doesn’t work with modems from other ISPs, but we can’t see many buying a Hub 4 to use it this way.

Another welcome sight on the Hub 4 is its USB 2.0 port – something seen on the Virgin new Super Hub, but left off the Sky Hub. This allows a printer or external hard drive to be easily shared across the network. Of course, third-party behemoths like the Linksys EA6700 and D-Link DIR-868L have moved to USB 3.0 (along with 802.11ac W-iFi), but this may come with the impending Home Hub 5 that BT hopes to launch before the end of the year.

Other notable elements are the Hub 4’s integrated parental controls, which allow you to cut off any device from your network at set times (such as children’s laptops after bed time) and WPA2 security, which is enabled by default. 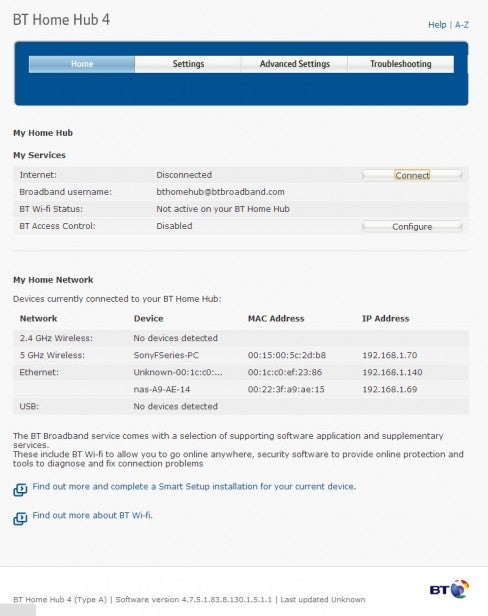 A big step forward with the Home Hub 4 is its CD-free setup. Simply connect up in the Hub 4, use the supplied card to log onto its Wi-Fi and you’re away. Admin settings can be reached at both http://bthomehub.home/ and 192.168.1.254. The user interface here (above) is basic and (needless to say there is no Cloud platform like Linksys’ Smart WiFi or D-Link’s mydlink), but navigation is straightforward.

Interestingly, BT sets both 2.4GHz and 5GHz wireless bands to the same SSD. This is frustrating as it doesn’t let users choose which network they want. This is a crucial choice given the performance benefits of 5GHz and the control it offers a household in spreading traffic across between different bands to keep things speedy. That said this is easily changed in the ‘advanced’ admin settings. 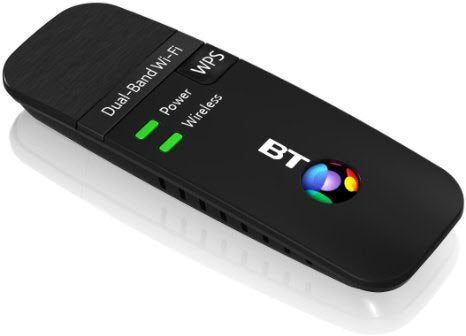 BT also supplied us with its ‘Dual-Band Wi-Fi Dongle 600’ (£34.99), a useful option for older laptops and PCs lacking support for 5GHz wireless n. It claims a driverless install, but we found we needed to download software from bt.com/help/dongle to make it work with Windows 8. That said this is worth doing as the software is needed for the dongle’s WPS functionality to work on any Windows OS. Notably, we didn’t see any Mac OS X support.