What is the Sky Hub?

The Sky Hub is the router the broadcasting giant supplies with every new connection to its ever-expanding fixed broadband network. Unlike previous Sky routers, which were designed by Netgear, this time Sky claims credit for its design and that its range and performance is a step above routers supplied by other ISPs. With Sky Fibre now unleashed and promising breakneck Internet speeds, it needs to be… 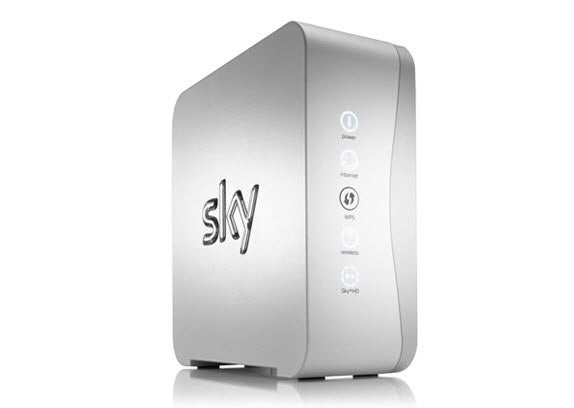 Take the Sky Hub out the box and its inspiration is clear. The white colouring, square shape and rounded corners owe a large debt to Apple’s AirPort Express Base Station. This isn’t necessarily a bad thing. The matt finish means it isn’t a dust and fingerprint magnet like many other routers and status lights – power, Internet, WPS, wireless and Sky HD – are clearly labelled. In fact, the inclusion of ‘Internet’ as a smiley face symbol is a nice touch as is its ability to detect when Sky HD on-demand services are in use.

Less welcome is where Sky has broken from Apple’s design principles with an off-white finish on one side and the gratuitous, reflective Sky logos on both sides that are stuck on rather than subtly embossed. Where Sky does deserve credit, however, is the Hub integrates both its DSL modem and PSU – the latter meaning no bulky plug or separate power brick and the whole package is highly compact at just 104 x 104 x 54mm and 368g. 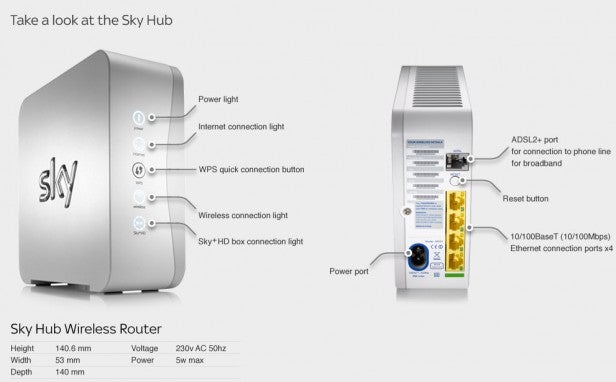 The problem is this immediately sets our Spidey senses tingling. How has the Sky Hub managed to be so compact? Sadly because it is extremely short on features.

What stands out most is the Sky Hub is just a single band (2.4GHz) 802.11n router. This means all wireless activity in a household must share the same bandwidth and the 2.4GHz band also performs more slowly than the 5GHz band, which is a part of dual band routers like Virgin’s new Super Hub and BT’s Home Hub 4 (review coming soon).

Another shock is the Sky Hub lacks Gigabit Ethernet, a standard feature on routers for a number of years now. Instead the Hub has four 10/100 Ethernet ports which means their peak wired speed (100Mbit) is only just above the 76Mbit speeds at which Sky Fibre can operate and will prove a serious bottleneck to wired home networks which can work in excess of well over 300Mbit.

The shortcomings don’t stop there either as Sky has also omitted USB ports which allow printers or external storage to be quickly shared across a network. Sky isn’t alone in this as Virgin’s new Super Hub also omits a USB port, but BT’s Home Hub 2, 3 and 4 all support it and one USB port is common on most third party routers. Indeed, some, such as our current favourite 802.11ac router, the Linksys EA6700, have two USB ports.

Elsewhere the Sky Hub does at least offer WPA/WPA2 and WPS wireless security as well as port forwarding, uPNP and Dynamic DNS, but it isn’t IPv6 compliant – something we hope Sky will add in a future firmware update. 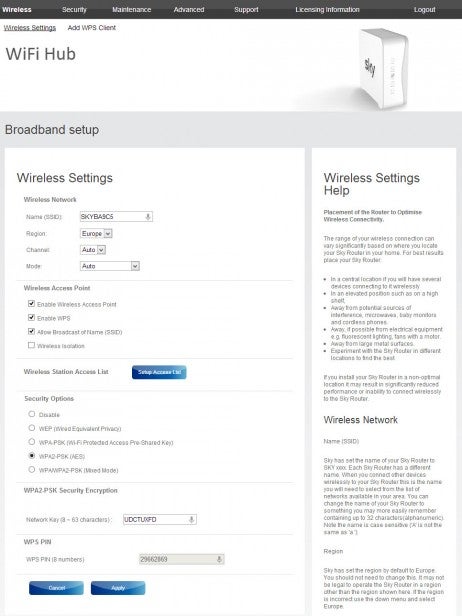 The flip side of such a basic feature set is the Sky Hub is a doddle to set up. Plug in the power and your DSL cable (note Sky supplies just one microfilter), give it a minute to boot, connect to the wireless signal via the password provided on the bottom of the router and you’re ready to go.

Adjusting settings is just as straightforward. The Sky Hub lacks the advanced Cloud platforms launched by Linksys and D-Link, so it is a case of entering 192.168.0.1 in your web browser when connected to the network and logging in with the default username and password (remember to change them).

The Hub’s user interface is basic, but clear with major categories written along the top – Wireless, Security, Maintenance, Advanced, Support – and options are presented in drop down menus. A useful right-sided column gives novices a wordy description of what each section means, though it requires a great deal of scrolling and could’ve been better laid out.