What is the Linksys EA6700?
The EA6500 is Linksys’ new flagship 802.11ac wireless router. It replaces the EA6500, Linksys’ previous top of the line model and its first router to support the next generation ac wireless standard.

The EA6500 is our current pick of the 802.11ac routers available, so given the EA6700 will replace it on shop shelves it has big shoes to fill. 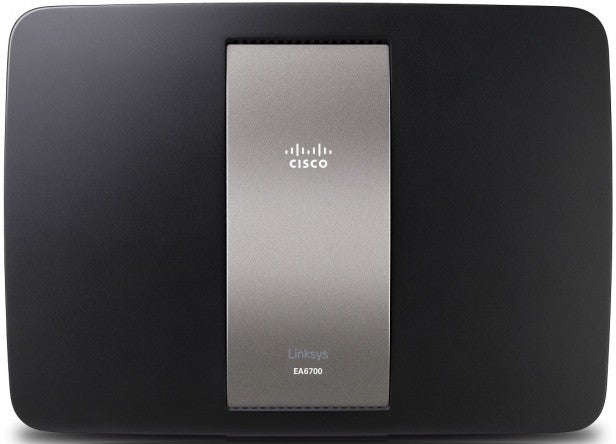 Linksys EA6700 – Design
From first glance the EA6700 looks identical to its forebear. This is not necessarily a bad thing. Much like a ThinkPad, Linksys’ premium routers have had a consistent design for some time now and the EA6700 retains this same rectangular, wall mountable shape. Plenty of thought is behind it: the matt grey finish resists dust and fingerprints and the metallic band adds to its discrete stylish look and opens up to make space for a ventilation grill.

Interestingly the EA6700 still sports the Cisco logo, despite Cisco selling Linksys to Belkin a few months ago. Belkin has already announced it will keep the Linksys branding, but whether it will also add its own logo to the EA6700 in time is unknown.

The first sign that changes are afoot is along the rear of the EA6700 with the EA6500’s pair of USB 2.0 ports replaced by one USB 2.0 and one welcome USB 3.0. The layout of the ports has also been tweaked. Running left to right you now have USB 3.0, USB 2.0, 4x Gigabit Ethernet ports, an Internet port (for connecting to your modem), a reset pinhole, power socket and power switch.

Previously the USB ports had been sandwiched between the Ethernet ports and power button and the new arrangement makes them more accessible.

Linksys EA6700 – Features
Aside from USB 3.0, the EA6700 ticks the same primary boxes as the EA6500. Its headline feature remains its 1300Mbit 802.11ac and this is augmented by 450Mbit 802.11n for the misleading ‘1750Mbit’ figure punted by most ac wireless routers. These bands are powered by six internal 3D antennas with high power amplifiers.

The other talking point with any new Linksys router is the company’s ‘Smart WiFi’ (previously ‘Connect Cloud’). Smart WiFi is a Cloud platform which enables you to access your router from any location by logging in at linksyssmartwifi.com or using the company’s official Android and iOS apps. Smart WiFi lets you remotely add or remove devices on your network, adjust privacy and parental settings, control guest access, prioritise devices or applications, change passwords and even the router SSID and broadcast bands. It also has an API for third party apps and their numbers are growing.

Connect Cloud actually had a contentious launch as it unilaterally imposed itself on all the latest pre-Cloud Linksys routers. But under the Smart WiFi banner it has matured into by far the most attractive, intuitive and powered router control platform currently available. It won’t intimidate technophobes and advanced users can tweak minutiae to their heart’s content. 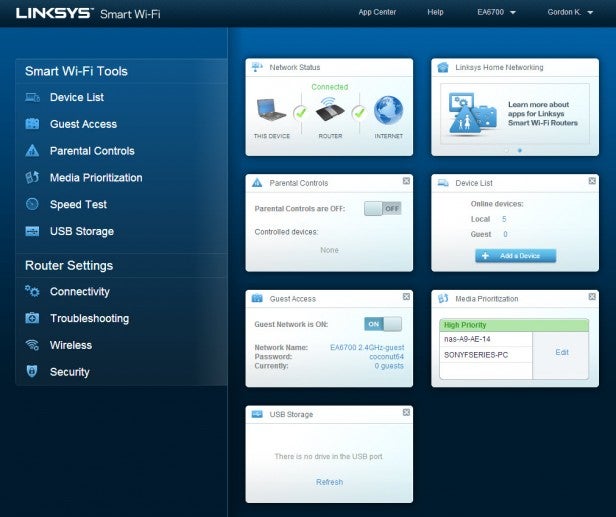 Like the the EA6500, the EA6700 also caters for users with NFC enabled devices with a bundled ‘SimpleTap’ card. Just touch the card to your NFC device and it will be automatically connected to the EA6700’s 802.11n 2.4GHz wireless. Why Linksys chose to associate the card with this band is down to prevalence as wireless n 5GHz support still isn’t ubiquitous and of course 802.11ac support right now is rarer still. That said, SimpleTap is a great way to quickly add devices.