There was a time when stock Android, the way Google intended it to be, was ugly. It was basic, lacked sheen and it paled in comparison to Apple’s iOS. Also, phone makers wanted to stamp their own identity on their handsets, rather than have them all appear alike, so they decided to spruce Android up a bit by adding their own ‘skins’. These are layers that sit over the operating system and change how it looks, along with adding some extra features.

The thing is, Android is no longer ugly. In fact, Android Marshmallow is the sleekest, most polished mobile operating system out there. But these skins are still commonplace.

Samsung’s version is called TouchWiz, and while it’s far less overbearing than Huawei’s EMUI or the skin used by LG, it still alters a lot of Android. Icons are different, there are multiple apps that do the same thing – there are two browsers, for example, and two music players – and Samsung’s exclusive features are pushed front and centre. It’s far from the mess it was a few years ago, but it can still look a bit childish and overly colourful. 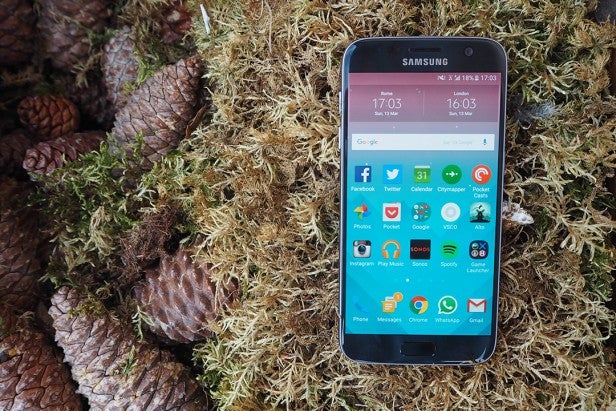 One new feature I really do like is Game Launcher. This is a super-charged folder where all your games sit, with a few nifty extras. It’ll automatically organise all your titles, let you record your latest round of Clash of Clans and quickly save a screenshot of your latest high score.

There’s even a setting that ekes more battery life out of the phone when you’re gaming, by dialling down the performance.

Flipboard Briefing, a news app that sat to the left of your home screen on previous Galaxy phones, has been ditched in favour of Upday. It’s basically the same, but it’s curated so you can’t add in your own news sources, like a typical RSS reader.

Thankfully both Game Launcher and Upday can be disabled with the flick of a button, so you can ditch them if they aren’t going to get much use.

Samsung isn’t quite so kind about letting you delete other preinstalled apps, though. Microsoft’s complete Office suite comes preloaded and it can only be disabled, not actually removed from the phone, and the same goes for apps like S-Health, S-Planner and so on. This makes TouchWiz quite a heavy skin, taking up 7.14GB out of the 32GB internal storage. By comparison, stock Android on a Nexus 6P takes up 6.5GB out of the box.

Underneath TouchWiz is Android 6.0.1 Marshmallow. This is the latest Android version currently available, but Google has now announced Android N which should see a release later this year. To be honest, the biggest ’N’ feature is split-screen multitasking and this is already available on the Galaxy S7, so there might not be such a clamouring to update this time around.

Marshmallow brought a new feature to Android that lets you combine the internal storage with that of a microSD card. It’s great, and lets you install all your apps to the expandable storage. It’s missing on the S7, though, with Samsung claiming it would stop users swapping the microSD at will. This is a shame, and makes the inclusion of expandable storage a little less exciting. You can still moves certain apps and your media to a card, but it’s nowhere near as seamless as it should be. 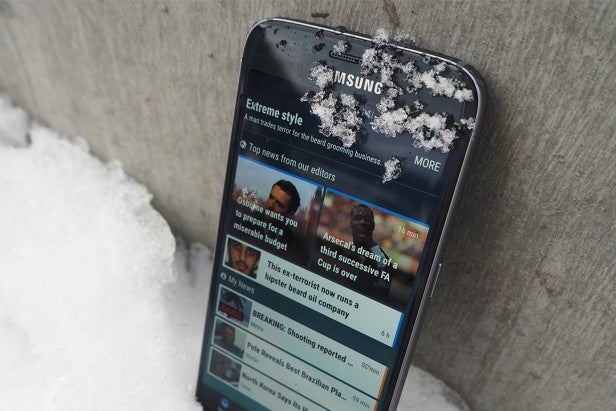 After ditching Qualcomm and its Snapdragon line of CPUs for last year’s Galaxy S6, Samsung has decided to change its mind this time around. Well, sort of.

Snapdragon’s 2015 flagship chip, the 810, had a tough time with overheating, while the Exynos 7420, the Samsung-made silicon that powers the S6, soared to the top of our performance tables.

There are two versions of the Galaxy S7. In Europe, including the UK, it’s again powered by a Samsung Exynos chip. This time it’s the 8890, which consists of eight cores, with four running at 2.6GHz and the other four at 1.59GHz. It’s paired with a Mali T880 GPU.

In the US and a few other territories, it comes with Qualcomm’s Snapdragon 820. Both are seriously powerful chips, so don’t be concerned about which one you’re getting. 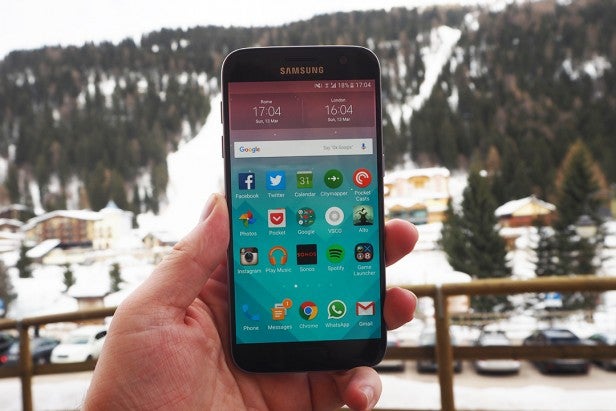 Both versions have 4GB of RAM – that’s 1GB up from last time – and it makes for super-smooth multitasking. Even putting two apps side by side doesn’t cause any issues.

The performance has been exactly what I’d expect from a 2016 flagship phone. It’s fast, with all that power barely put to the test when you’re browsing Chrome, sending the odd email or racking up a high score in Alto’s Adventure.

I have yet to find a game that lags even slightly. Hitman Sniper, Lara Croft Go and Asphalt all play without any dropped frames or slowdown.

But I’d be very disappointed in the Galaxy S7 if it struggled with any of these tasks, considering the sheer power that’s tucked away inside.

When reviewing the Galaxy S7 Edge, I found some slight bugs and performance issues with Samsung’s Android skin. On the S7, though, these haven’t been an issue.

In Trusted’s usual suite of benchmarking tests, the Galaxy S7 performed impressively. I’ll update this review once I’ve used more of this year’s Snapdragon 820 phones, as that will give a better comparison, but for the time being Samsung’s latest flagship is the one to beat. 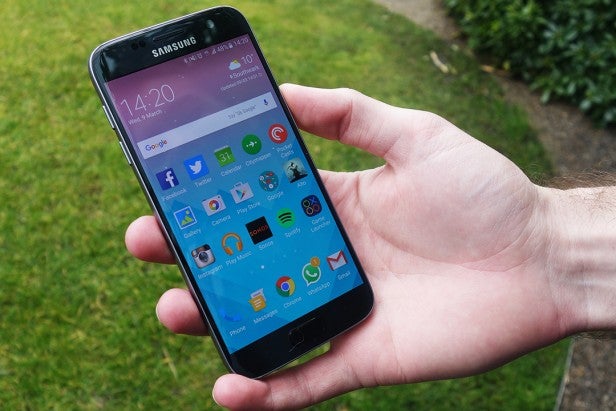 It picks up a score of 6,307 in the Geekbench multi-core test, putting it ahead of its closest rival, the Huawei Mate 8. The difference is much bigger when compared to a Snapdragon 810 device like the Nexus 6P, which posted a score of 4,245. It also out performed the iPhone 6S Plus, which ran in with a 4,417 multi-core score.

There’s an even wider gulf when it comes to Antutu. Here the Galaxy S7 scores 129,468, which is a big improvement over its closest rival, again the Huawei Mate 8 with 92,746.

Thanks to a new ‘water-cooling’ element inside the phone, it barely ever seems to get hot. It does warm up slightly when installing a boat-load of apps or if it’s fast-charging, but aside from that it stays nice and cool.

Instead of offering multiple versions of the Galaxy S7, you can only pick it up in a 32GB size. This is down to the reintroduction of the microSD slot.

I found call quality to be excellent on Three’s UK network, and the microphones do a really good job at shutting out any pesky background noise.