What is the Rock Candy Wired Controller for Xbox One?

We’re constantly shocked by the price of additional controllers for the Xbox One and PS4. When you’re looking at an investment of at least £45 for a DualShock 4 and £35 for an Xbox One Wireless Controller, you might start looking at third-party alternatives like this one from Rock Candy.

The Rock Candy Wired Controller is one of the first officially licensed Xbox One controllers.

Bearing in mind that the official Xbox One Wireless Controller will cost you around £35, we think this is too expensive for a third-party wired alternative. But if you look past that for a second, you’re actually looking at a controller that’s a direct double for the official controllers and with nearly the full feature set. 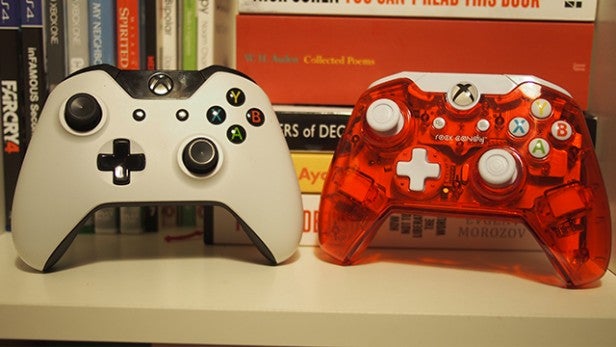 As you can see, the Rock Candy controller is a near carbon copy of the official Xbox One controller. You’ve got the same button layout, asymmetrical analogue sticks and the revamped shoulder buttons. It’s the same beast, but with slight differences.

For one, the Rock Candy alternative is made from a glossy polycarbonate shell that’s entirely translucent, allowing you to see all the gizmos and internal hardware through the case. It comes in green, blue and this vibrant red option, all with the same white accents.

Although that transparent case might be an appealing thought at the beginning, we can assure you that you won’t notice it at all when you start playing. All you’ll notice is how sweaty your hands get thanks to the glossy plastic finish during those longer, more intense gaming sessions. 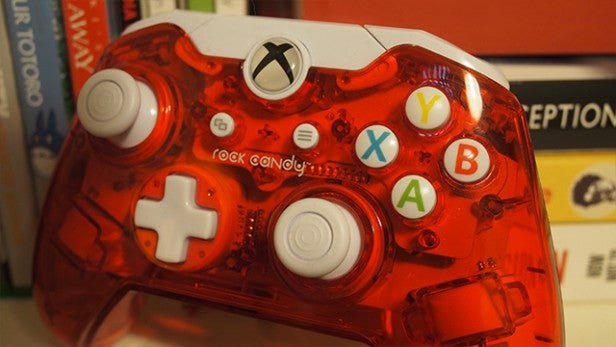 The official Xbox One Wireless Controllers have a much preferable matte finish that makes them feel more premium than the Rock Candy gamepads. Plus the matte finish helps improve grip and comfort.

We also don’t like the fact that the thumbsticks lack the textured grip introduced with the Xbox One Wireless Controller, as it gives you that little bit less control of your gameplay.

Overall, though, the build quality of the Rock Candy controller is actually very impressive. There’s no creaking of the plastic parts or weaknesses at the seams. Even if you get some gaming rage – as we all do from time to time – you won’t find the Rock Candy Controller can’t handle your extreme grip. 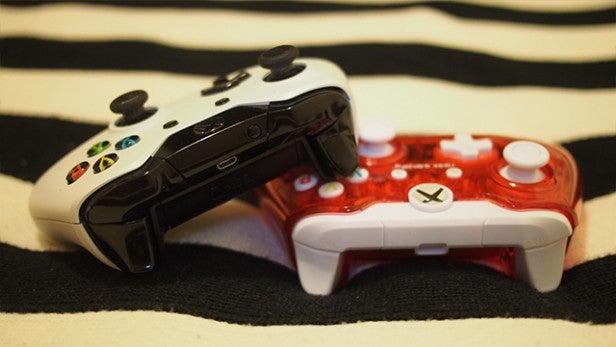 It also stands up well to drops and falls. We tried dropping it from waist height and from a few different table ledges, just to see if it could stand up to the inevitable tumbles. However, we don’t live in a house with wooden or tiled floors. We have a feeling that the shiny plastic case may not hold up so well on such surfaces, with the case likely liable to crack.

We will add that the buttons and triggers are a little noisier than the official controller’s, giving a much more audible click when pressed. But it’s not something that you’re going to notice in the long run.

For your £30 investment so far you’re getting a perfect replacement for the Xbox One controllers for around £5-15 less. 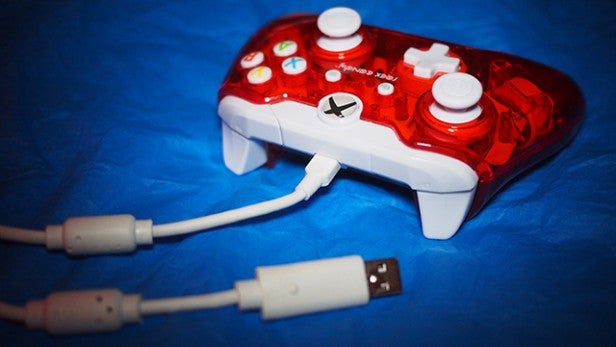 However, there’s a big downside to the Rock Candy Wired Controller for Xbox One and it’s clear from the name – this is a wired controller. It connects to your Xbox One via USB at the console end and by Micro USB to the controller.

Rock Candy provides an eight-foot removable cable with the controller, plus a breakaway section near the USB end so you won’t pull the Xbox One off the shelf if the cable gets snagged on something.

We found the cable long enough for our living room setup, but if you’re used to sitting a considerable distance from your TV, you may struggle.

Because it’s removeable, though, the idea is that you could replace it with a longer one if needs be. However, the Micro USB port on the controller is recessed inside a square hole, meaning access is a little limited. We found that not all our longer Micro USB cables could actually fit into the recess, making a large portion of them incompatible. 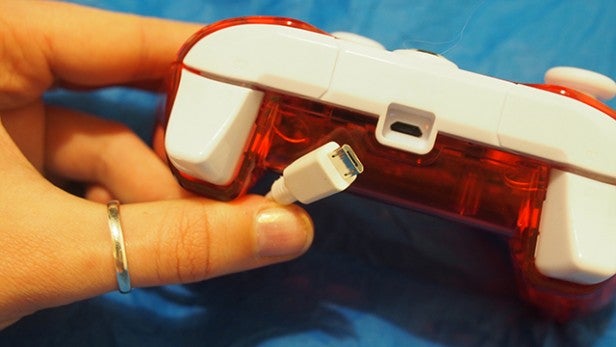 In terms of gameplay, you’re looking at a solid alternative to the official Xbox One controller. Because the Rock Candy gamepad has almost exactly the same design, you’ll notice little difference between them.

With the Rock Candy Wired Controller you’ll find you’ve got the same rumble triggers as the official alternative. That means you’ll feel all the subtle vibration nuances on offer from your Xbox One games – especially when it comes to racing titles.

We tried out the Rock Candy controller with several games, including the TrustedReviews Award-winning Forza Horizon 2, the epic Halo: The Master Chief Collection, FPS Call of Duty: Advanced Warfare and indie title Max and the Curse of Brotherhood. 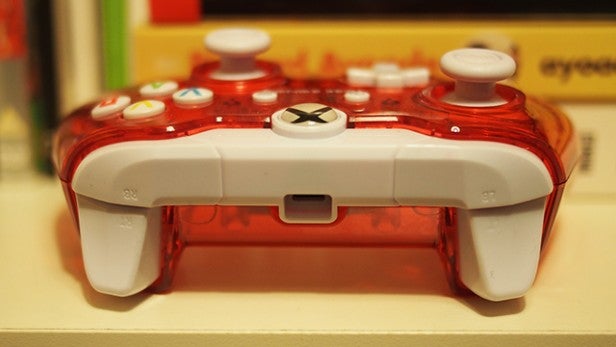 Switching between this and the official controller, there’s little to no difference in the smoothness of the analogue sticks. This third-party alternative is just as responsive and comfortable to use as Microsoft’s gamepad. The vibration effect feels a lot more violent than the official controller’s though, due to the Rock Candy’s thinner polycarbonate shell.

As we’ve said before, the overall noise of the Rock Candy Controller is more noticeable than the official controller’s, but the gameplay features are identical. 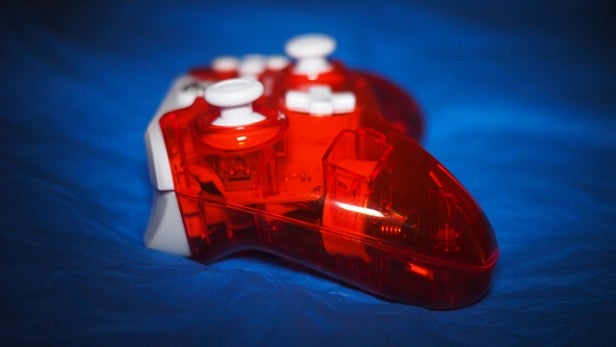 However, Rock Candy has also missed another trick if it’s looking to be the ultimate third-party controller in that it completely lacks headset support.

Currently, there’s only one wireless headset available for the Xbox One and that’s the Turtle Beach Stealth 500X. Otherwise, all headsets need to be plugged into the Xbox One Wireless Controller’s proprietary dock at the bottom, most likely using the separate Xbox One Stereo Headset Adapter.

With the Rock Candy Wired Controller for Xbox One, there’s no way to attach a headset whatsoever, so you’ll need to use your official Xbox One controller or a pricey wireless headset if you want to chat online with your pals or enjoy a more personal audio experience.

See also: Xbox One FAQ – Key things to know before you buy 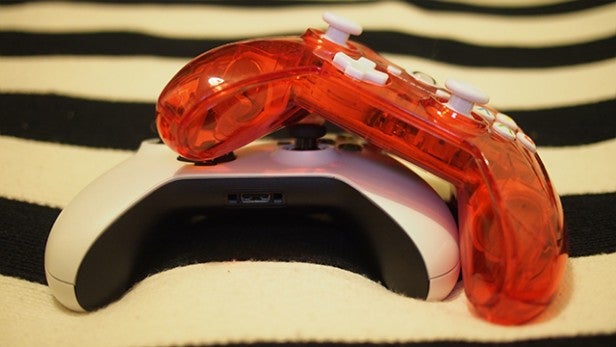 Should I buy the Rock Candy Wired Controller for Xbox One?

Although the design perfectly mimics the official Xbox One Wireless Controller, the fact you’re paying £30 for a wired controller cheapens the overall appeal of the Rock Candy controller. Perhaps at £20 it would be a minor oversight, but when the price difference between the official Xbox One controller and this third-party pad is so small, we’re more willing to spend the extra £5 for the freedom of a wireless controller.

Although build quality and game functionality is top notch on the Rock Candy Wired Controller for Xbox One, the high price, wired connection and lack of headset support make it pale in comparison to the official controller.