An additional 1TB or more at your fingertips

Both the Xbox One and PS4 come with a 500GB as standard, while the Xbox One X  and PS4 Pro offer 1TB. When you first get your console 500GB might seem like plenty, but with AAA game install sizes reaching the 40GB mark for the huge open-world titles, that hard drive will soon fill up.

As digital gaming and being able to get whatever you want from the internet has started to overtake physical media as the way to play, the idea of deleting some of your favourite games to install new titles seems like a big problem, especially how long it takes to reinstall games on most connections.

So, you might be wondering what’s the best way to upgrade the external storage on your Xbox One.

Well, unlike the PS4, where you’ll need to get your screwdriver out, Microsoft has made the Xbox One compatible with external hard drives instead.

It’s a quick and easy process that we’re going to help you through with our Xbox One HDD upgrade guide.

Here’s what will happen on your Xbox One UI as you install:

The first step to upgrading your Xbox One’s internal storage is choosing which external hard drive you want to use. And there are plenty to choose from.

Microsoft’s only caveats for what the Xbox One will support is that it has to be at least 256GB in size and be USB 3.0 compatible.

The Xbox One can actually support up to two 256GB or larger USB 3.0 drives, meaning you can expand your internal storage exponentially if you’re willing to fork out a couple of hundred quid.

We’ve opted for the 2TB WD My Passport Ultra Metal Edition. Unfortunately, this product is now discontinued, but we’d recommend this Seagate 2 TB Expansion USB 3.0 Portable 2.5 Inch external drive, which is USB 3.0 and could double or quadruple your storage depending on what model Xbox One you have.

Plus, it’s only £53.99 right now, making it a steal for boosting your Xbox One’s memory. 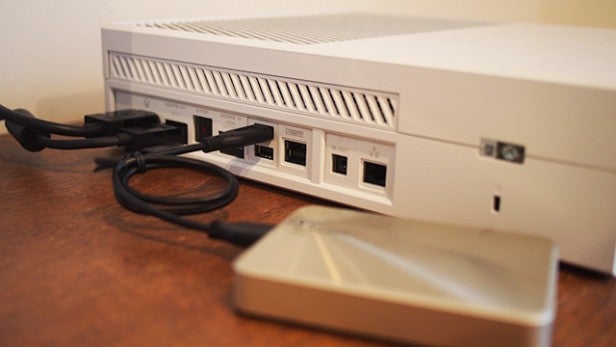 Step 2 – Plug it into your Xbox One

The Xbox One has three USB ports that you could attach your shiny new external hard drive to. We opted for one of the rear ones so we could tuck the hard drive out of sight.

When your Xbox One is turned on, plug the hard drive into one of the USB 3.0 ports. The Xbox One will notify you that the external hard drive’s been connected.

Although you might be tempted to interact with the pop-up, to quickly and easily format your new hard drive, go to the settings menu. 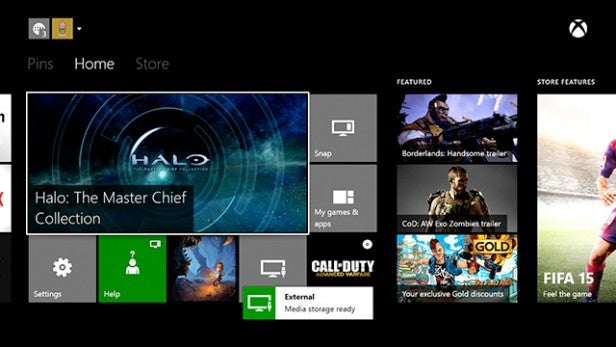 Head to Settings, then System and then choose the Manage Storage option. You’ll then see your internal hard drive on the left-hand side, and the new external one on the right.

At the moment, you can only store pictures, music and video files on the external hard drive, so you’ll need to format it in order to be able to store games on it.

Select it and you’ll be presented with a dropdown menu. Choose the Format for Games & Apps option and then select Format Storage Device.

You’ll be asked to give it a name, and then decide whether you want it to be the default installation drive or stick with the internal hard drive for now. You can always change it at a later date. 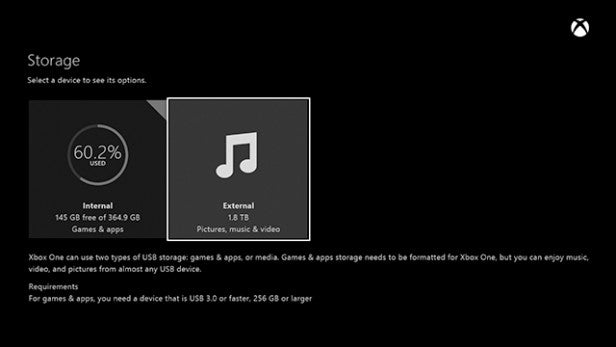 But if you start storing your games on your external hard drive, you can then take that drive to a friend’s house and start playing your own games over there – if you sign into Xbox Live first anyway.

Once you’ve made your choice, select the Format Storage Device option again.

The little Xbox One loading circle will show for a moment and then you’ll have yourself a new location for all your games. 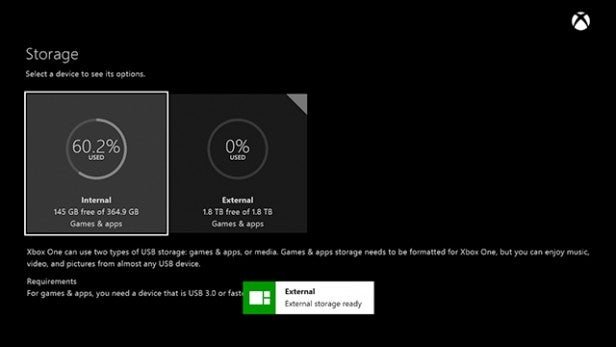 Your Xbox One has now gone from a rather meagre 500GB capacity to 2.5TB – give or take a GB or two for system admin.

That 2TB means an additional 100 or so games, based on an average 20-25GB install per AAA title. Or around 50 larger games like the 40GB Assassin’s Creed Unity.

We noticed that there’s a slight speed increase in game load speeds with titles stored on the external hard drive. That’s because the WD drive’s USB 3.0 connection is faster than the SATA II connection between the Xbox One and the internal hard drive.