What are the Plantronics BackBeat 500 headphones?

Plantronics has launched its attempt to provide bass-heavy sound at an affordable price in its BackBeat 500 on-ear headphones. The pair of Bluetooth cans sit below the company’s BackBeat Pro 2 over-ear options, and look designed to take on the likes of the House of Marley RISE BT, aspiring to sound as similar to the Beats Solo 3 Wireless as possible, all the while without asking for a couple hundred pounds in return.

While some of the colour options are a tad, shall we say, nauseating, the sound quality and affordability of the BackBeat 500 make them worth considering when on the hunt for affordable cans.

First, let’s address those colour options. The BackBeats are available in White, Grey, and Dark Grey – but with a garish colour that sits alongside. The Dark Grey finish is the one to go for; it looks closer to black, and gives the headphones a sleek overall look – something the other options fall way short of as a result of the obnoxiously vibrant accompanying colour choices. 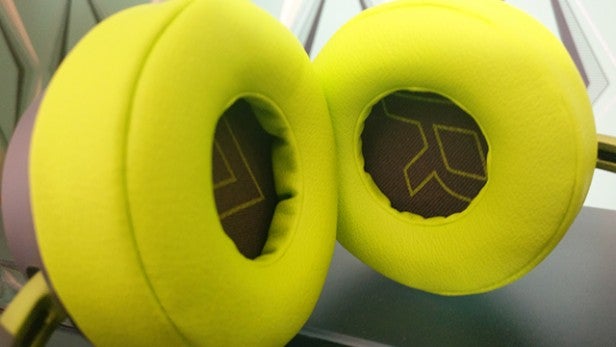 The ‘Grey’ option arrived with a garish luminous green finish on the headband and earcups. The White headphones feature red highlights on the sidearms, which, when combined with the plastic build, makes them look a tad childish. Still, Plantronics reportedly designed the BackBeat 500s with a younger audience in mind, so the design somewhat makes sense.

Bad colour choices aside, the overall build is decent enough to make you feel as if you’re getting your money’s worth. At £89.99, you won’t be getting the most polished product, but the 155g BackBeats are lightweight and comfortable enough to use as your running headphones. I did find my ears becoming a little warm after about 20 minutes of use, but this will be the case with most on-ear headphones.

For that money you get on-ear controls, a 3.5mm port for wired playback, and “memory foam” ear cups – which, evidently, translates as fairly soft padding around the ear cups. On the bottom of the right cup you’ll find the ‘on’ button, alongside a control for answering and hanging up phone calls; the left cup features the 3.5mm port, Micro USB port, the volume rocker, and the skip and play/pause buttons. The buttons are all physical, so there’s no fumbling around with touch controls here, but they do feel a tad flimsy. 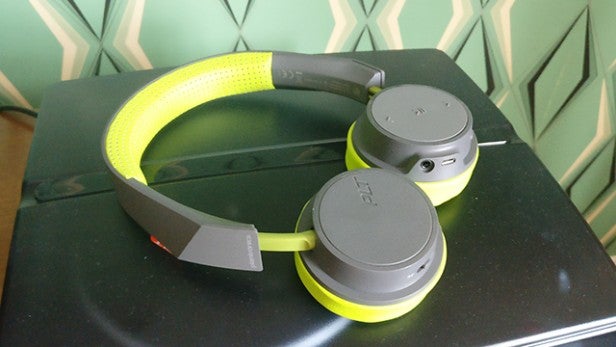 The BackBeat 500 doesn’t fold up either – like the House of Marley RISE BTs – so they aren’t the most portable choice of headphones on the market. The ear cups themselves do swivel, however.

Overall, the design feels a little outdated. The fonts, the grey plastic, the moulding, the luminous green – it’s all a bit budget, really. Still, if you want something lightweight, comfortable and affordable, Plantronics’ BackBeat 500s are definitely worth checking out – just, remember to go for the Dark Grey finish.

For an affordable pair of headphones, the BackBeats come with an impressive range of features. Alongside the Bluetooth functionality, there’s the aforementioned on-ear controls, a 3.5mm socket, and a respectable 18 hours of play time on a single charge. Compared to the £330 Sony MDR-1000X and Bose QuietComfort 35, which both come with a 20-hour battery life, that’s a pretty decent offering for a £90 pair of headphones.

Plantronics has also provided a DeepSleep mode, which the company says “maintains battery charge for up to six months when your headphones are out of range or left on.” I haven’t had the set for six months, so can’t comment on whether this is accurate – but it’s a nice extra nevertheless, which, if it works, could persuade those users that often come back to a pair of dead Bluetooth headphones after inadvertently leaving them on. 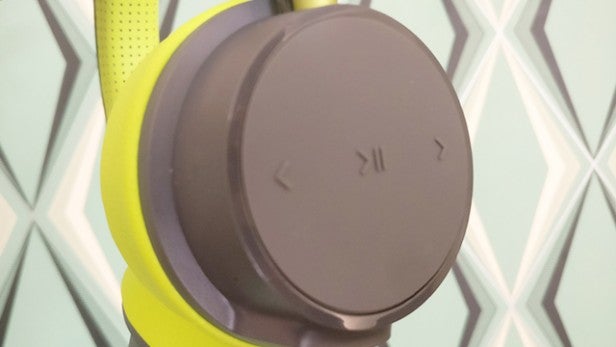 Other features include a built-in microphone for taking phone calls, plus the set offers a range of 33ft, meaning you can roam around your house while listening to music on your laptop without the sound cutting out. What’s more, Plantronics has thrown in multi-point Bluetooth pairing, which means you can pair more than one device to the headphones at any one time. This should come in handy as more manufacturers ditch the headphone jack in favour of wireless audio.

Despite the small ear cups, isolation is decent. There’s no active noise-cancelling here, but for an on-ear set, the phones did a good job of passively blocking out the sounds from around me.

Setting up the headphones is fairly straightforward, although the weird sliding power/pairing button could have been better designed. Slide the control one way and it turns the headphones on; slide it the other way and the pairing process begins. What the quick-start guide doesn’t mention is that you need to slide and hold the button to begin pairing.

Luckily, there’s an on-board recorded voice that lets you know what mode the headphones are in, as well as how much battery life you have remaining. Once you push and hold the slider in the right direction, for example, the helpful voice will tell you that “pairing has started”; turning the set on prompts the voice to inform you that battery is “high” or “low”. 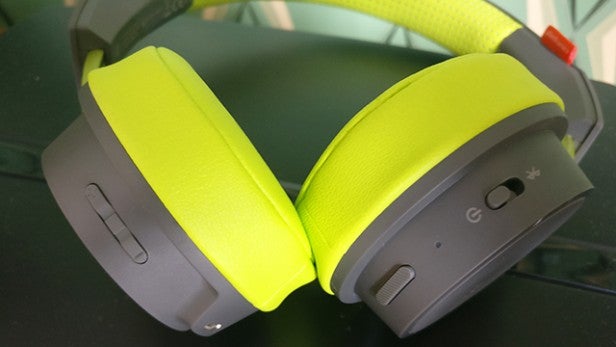 After having fiddled with the bizarre power button for some time, and managing to finally pair the headphones, the sound came spilling through the BackBeat’s ear cups – and I was pleasantly surprised.

Perhaps it was the off-putting design, or the needlessly fiddly power/Bluetooth control, but I wasn’t expecting much from the speakers. So when the balanced, if slightly bassy, tones of the La La Land score eventually filtered through, I was caught off-guard.

Bass frequencies have definitely been pushed slightly here, but not to the extent of the Beats Solo Wireless 3, and when listening to the big band jazz of Justin Hurwitz’s score, the sound appeared nicely balanced.

When I switched to hip-hop, however, treble tones were lacking. The pair also seemed to struggle with mids, which weren’t as obvious when listening to jazz. This isn’t a huge issue, and could be solved via the software with a bit of EQing, but there was a distinct lack of higher-frequency prowess on Kendrick Lamar’s latest. 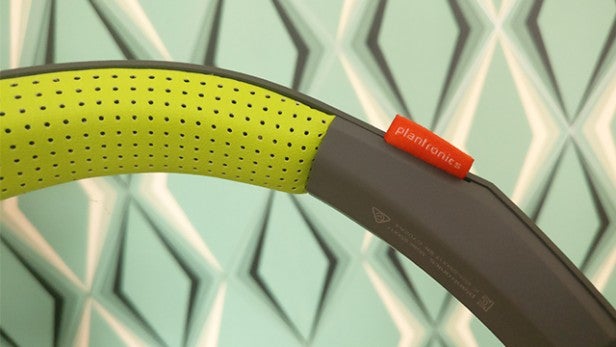 Somewhat confused by the apparent inconsistency between genres, I decided to test the BackBeats with one of the most finely mixed releases from this year: Jonwayne’s ‘Rap Album 2’.

Engineer Kevin “Daddy Kev” Marques Moo is a mixing master, and excelled on Rap Album 2 – making it the perfect release for testing the capabilities of the BackBeats when it comes to bass-heavy hip-hop. Unfortunately, the headphones struggled to preserve the crystal-clear nuances the album offers, with the BackBeat’s limitations becoming starkly clear as soon as the first breakbeat dropped.

That said, my overall impression was that the BackBeat 500s are capable of providing a surprisingly lively sound. It simply depends on what you’re playing. The audio is decent enough for the price, but I’d be tempted to spend a little more to get a clearer treble response and more reliable overall audio signature. I’m thinking here of the £130 Marshall MID Bluetooth or even Plantronic’s own £149 Plantronics BackBeat PROs.

Should I buy the Plantronics BackBeat 500?

If you’re looking for an affordable set of Bluetooth headphones then you should consider the BackBeat 500s, especially if a lightweight design and numerous features are important for you. But it’s difficult to recommend spending £90 on these headphones when you can get the Marshall MID Bluetooth – which sport a more robust design, alongside as many features and a more dynamic sound signature – for £40 more.

While the BackBeat 500s’ sound quality is decent for the price, you’re still spending close to £100, and at that price you’d hope for something a little more consistent.

On the other hand, battery life – although not the best available –is definitely a plus point here, as is the multi-point Bluetooth sharing feature. Throw in the 3.5mm socket and microphone and the BackBeat 500s have plenty going for them. However, although solid, the sound quality just isn’t up to scratch for me.

Lightweight and feature-packed, the BackBeat 500s are a respectable budget offering – but the odd design and lack of decent mid/treble performance stops them being the best in this category.