What are the Marshall MID Bluetooth?

The Marshall MID Bluetooth are wireless headphones with the Marshall guitar amplifier design slathered all over. That means a lot of black, a lot of leatherette, and headphone cables that look a bit like chunky guitar leads.

Despite the instantly recognisable branding, the Marshall MID Bluetooth are still a lot cheaper than the Beats Solo 3 Wireless, costing around £150 where the Beats sell for £250. 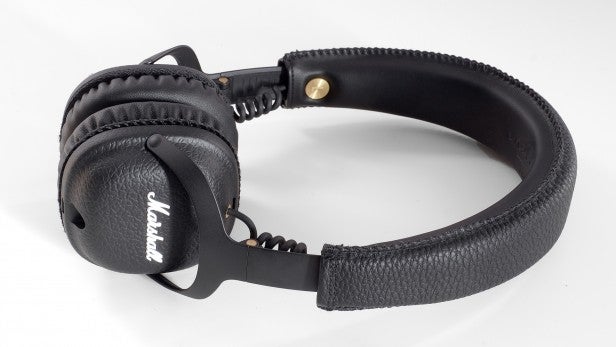 The Marshall MID Bluetooth look may emulate the rugged toughness of one of Marshall’s guitar amps, but they actually focus just as much on practicality. They’re no bigger than an average on-ear pair, fold to take up less space and are fairly light.

It’s for the best: no-one wants to wear a 4×12 guitar amp cab on their head. But like Marshall’s other headphones, the Marshall MID Bluetooth are packed with nods to the amps. The plastic earcups have an embossed leather texture, they’re square-ish rather than round, you can’t miss that Marshall logo, and they’re packed with little bits of gold hardware, matching a Marshall amp tone/volume knob. 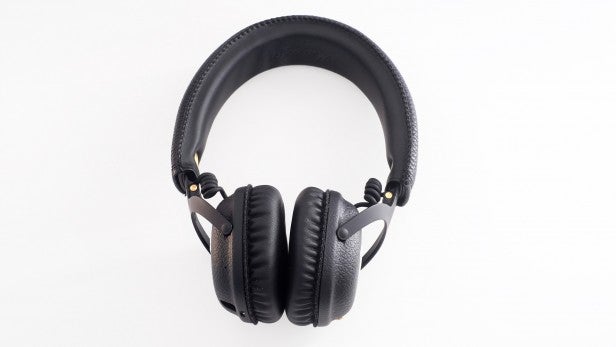 There’s not a square inch of real leather on the Marshall MID Bluetooth; it’s either synthetic or just a pattern in moulded plastic. However, Marshall amps (like other amps) use leather-effect vinyl anyway rather than the real stuff. After all, that’d be an awful lot of leather.

The Marshall MID Bluetooth’s comfort level is fine but not sumptuous for long listens, largely down to a decision to make sure they have a good enough fit for wearing while you jog. Their fit is sturdy, but I do find the headband pressure causes some ear fatigue after about an hour. It’s worse if you wear glasses.

However, very few on-ear sets with a secure fit get away from this issue, including the Bowers & Wilkins P3 and Beats Solo Wireless 3, and the Marshalls have a much softer feel than the Beats. 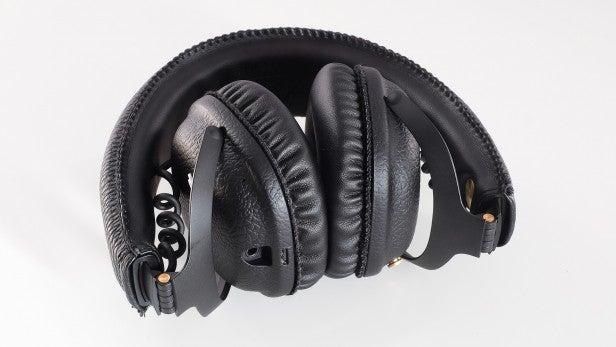 Other parts slightly differing from the norm include the coiled cable. You usually only see this in studio headphones, because it adds weight and extra cable length just isn’t really necessary in a pure portable headphone. Here it does add a little weight bias to the right side of the Marshall MID Bluetooth, but I’ll admit it’s something I’ve only noticed now I’m actively thinking about it. As these are wireless headphones you probably won’t use the cable too much anyway.

It also stops them from being yanked off your head if you catch them on something: handy if you’ll also be practising guitar, using the Marshall MID Bluetooth as monitor headphones. 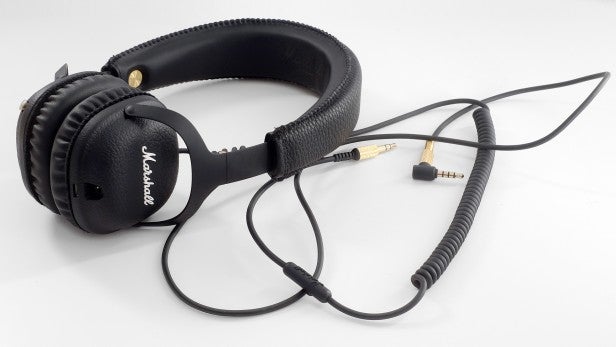 The Marshall MID Bluetooth have just about everything I expect to find in mid-price wireless headphones. They use Bluetooth to stream music from your phone and have aptX for higher-quality streams from phones with support.

You charge the Marshall MID Bluetooth using a Micro USB port on the right cup, and battery life is excellent at up to 30 hours. There’s a 3.5mm socket next to the charger that lets you either plug in directly when the battery runs out or even share your music with another pair of headphones when streaming. That’ll come in handy if you find yourself on an 8-hour National Express journey with a friend and don’t want to be a) entirely bored or b) entirely antisocial. 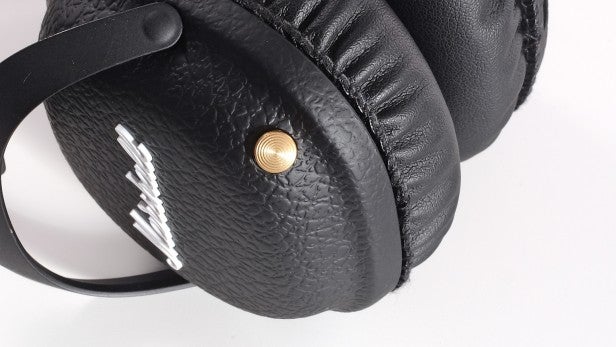 The little gold nubbin on the left cup is more unusual. This is a tiny joystick that lets you control the volume and playback. Press it in to play/pause, and directional flicks do the rest.

I found this very fiddly at first. As it sits on the curve of the Marshall MID Bluetooth’s cup, you don’t so much press up/down/left/right as up-right-ish, down-left-ish and so on. However, spend 10 minutes learning how it works and it’s useful and functional.

The Marshall MID Bluetooth’s wireless performance is very good, if not quite as rock-solid as that of the Beats Solo 3 Wireless. I noticed the occasional wireless blip, but nothing that proved annoying. No wireless pair is totally immune to interference, either. 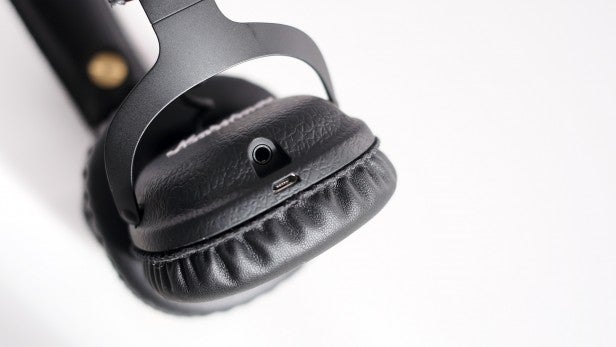 You might expect the Marshall MID Bluetooth to sound a lot like the average pair of wireless headphones with a big brand stamped on them: lots of bass and an emphasis on thrills for the ultimate crowd-pleasing result. They are quite different, though.

There’s some degree of bass boost, common to almost all portable headphones, but listening to them next to the Beats Solo 3 Wireless, the Marshall MID Bluetooth have a much more reserved low-end. Where the Beats’ bass can be distracting, often pulling focus away from vocals in a slightly obnoxious way, the bass here is better integrated. 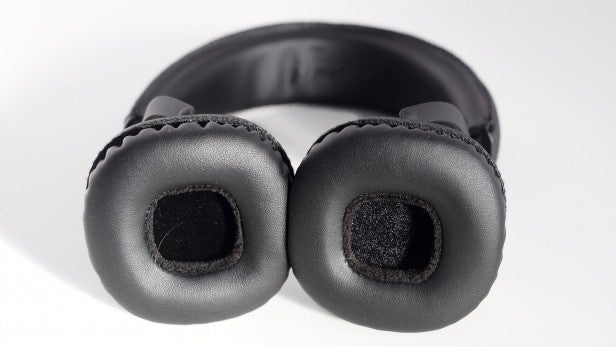 It’s more like what you’d hear in a Sennheiser or Sony pair, and the Marshall MID Bluetooth bass is cleaner-sounding than some of their pairs, too. Some of you may want to be slammed in the face, of course, and there’s a slight lack of bass impact here. But there’s still depth, and better-controlled bass is a major benefit if you like listening to podcasts or other spoken-word audio. With an overly-bassy pair just a simple human voice can cause odd bass resonance that sounds a bit like an underground train is running under the recording studio.

Marshall explains the Marshall MID Bluetooth aim on its website: “custom tuned 40mm dynamic drivers lend Mid a robust sound that perfectly balances clarity with just the right amount of bass”. As a guitar-y headphone, there’s a mid-range focus, and sure enough the upper-mids are a lot cleaner and more pronounced-sounding than other mid-price Bluetooth headphones.

While the intention is to really bring out the edges of crunchy guitars rather than smoothing them out, this also gives vocals a well-defined but lighter character. Emphasising mids can at times backfire, making the sound grating and hard, but there’s none of that here. I do think Marshall is pushing at the limits of the driver, though, as comparing the Marshall MID Bluetooth to some rivals there is a slight ‘digital’ synthetic edge to those upper-mids. It’s not obvious until you start directly comparing pairs, though. 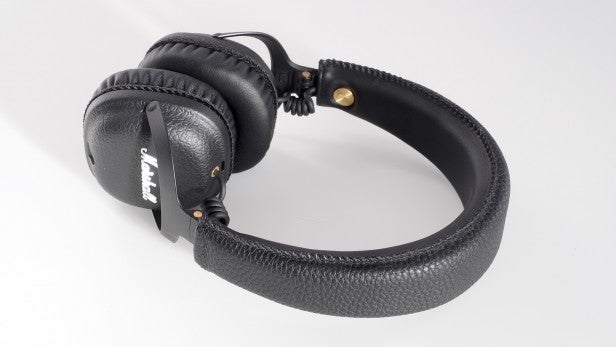 The Marshall MID Bluetooth are more considered and clear-sounding than I expected. However, they’re not winners in all respects.

They are not as rich, wide or dynamic-sounding as some, making them seem a flatter and less exciting. Listening closely, part of this seems down to a demotion of the lower mids, which takes some of the weight out of the sound. Too much weight is bad, of course, but the Marshall MID Bluetooth’s lightness also means they lack the punchy authority I’d like to hear. This may make you ramp up the volume, and at high volumes they become slightly brash.

From the references I’ve already made in this review, you might assume I’m only comparing to the more expensive Beats Solo 3 Wireless, but the cheaper JBL Everest 300 also have the weight the Marshall MID Bluetooth lack.

There’s also an odd effect when the cable is used, creating a fizzy bed of background noise. Wired use slightly increases treble presence, but this would put me off using the Marshall MID Bluetooth wired unless I need to. 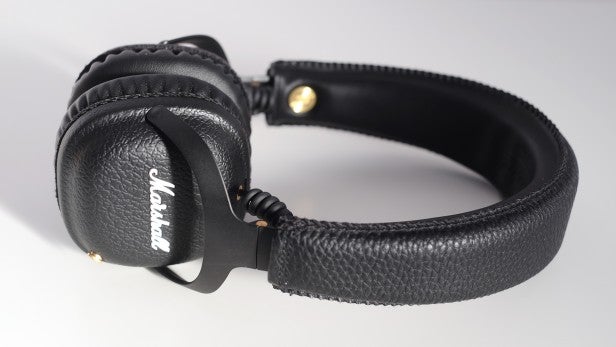 Should I buy the Marshall MID Bluetooth?

If you want wireless headphones cheaper and less bassy than the Beats Solo 3 Wireless, the Marshall MID Bluetooth are a solid choice. However, their sound might not be quite what you expect.

These are lighter-sounding headphones, ones with plenty of upper-mid detail but a lack of pure mid and lower-mid bulk that lends sound weight. It’s not necessarily a bad choice, but the Marshall MID Bluetooth sound a little smaller and less rich than most alternatives. Do you listen to rock music to hear the crunch of the guitars, or is the impact of the kick drum more important?

The Marshall MID Bluetooth are better at the guitars than the drums, and tend to thrive at lower to mid-level volumes.

Decent wireless headphones with a different sound signature from the rest.