What are the House of Marley RISE BT?

The RISE BTs are the most expensive Bluetooth on-ear headphones The House of Marley makes. At £100, they’re not exactly high-end, but they’re a lot more expensive than the £40 Rebel BTs, and certainly feel like a well-built product.

There are issues, though: though the RISE BT’s offer decent bass levels, their handling of the upper frequencies leaves a lot to be desired. 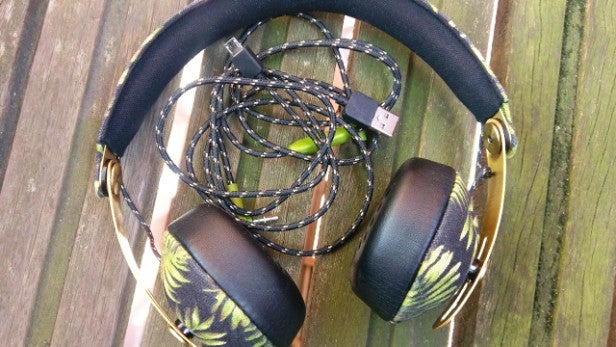 As mentioned, the RISE BTs are on-ear headphones, which means they’re separate from Marley’s more expensive over-ear designs. That said, it doesn’t feel as though the company has skimped on build quality here.

The RISE headphones come with soft ear cushions that simply rest on your ears rather than forming a seal around them. It means your entire ears are constantly taking the weight of the pads, which can become slightly uncomfortable at times (especially if it’s hot or you wear glasses), but for the most part, the phones feel lightweight and quite comfortable as a result. The padded headband definitely helps keep things nice and comfy, too – though, that headband does protrude quite conspicuously from your head.

Speaking of which, Marley has opted to continue the more stylish and sporty look it introduced on the Rebel BTs with these latest headphones, which come in three patterns and colours: Black, Blue Denim, and “Bold Palm”. I was sent the latter, which manages to adequately evoke the whole “island” vibe, though doesn’t do much to make the pair look any less silly. Most will likely prefer a sleeker black or blue design.

The headphones are also foldable, and thanks to the on-ear design, the smaller earcups fold up quite nicely into a perfectly manageable size that’ll easily fit in your backpack. 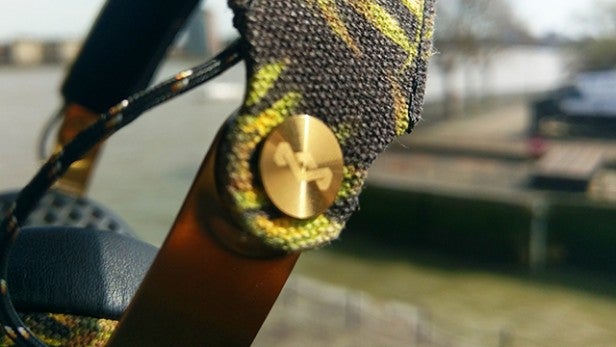 Above those earcups, the stainless steel arms that extend from the headband and allow you to adjust the fit, which look much like the £250 Sennheiser Momentum 2.0‘s sliding adjusters. It’s a nice addition which adds to the premium feel of this more affordable pair.

On the right ear cup you’ll find three buttons, which can be used to turn the headphones on and change the volume up and down. Double tapping on the + or – buttons will skip forward or back a track respectively. The buttons are easy to use and don’t take much getting used to, unlike the capacitive touch controls on the more expensive Sony MDR-1000Xs.

With this latest set of headphones, Marley has made sure it’s provided full Bluetooth support. You won’t find high-quality AptX tech here, however, but the setup is incredibly easy – just turn on the headphones by holding down the power button, and wait for them to pop up on your phone, tablet, or laptop’s Bluetooth menu. 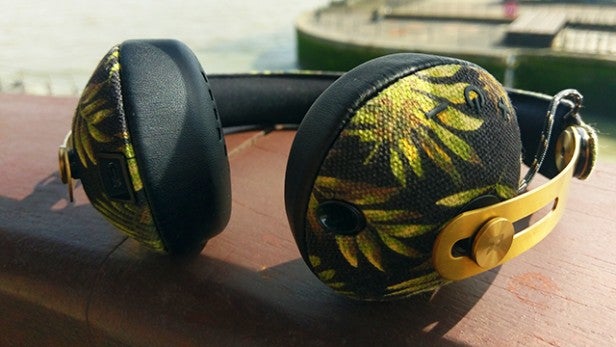 Unfortunately, a couple of times, when using the headphones with my MacBook via Bluetooth, the sound would come in at a very low quality for a few seconds, before coming it at full quality after a short pause. It’s by no means a huge issue, but it’s something I haven’t found all that often with other Bluetooth pairs.

Of course, you could always use the RISE BTs as a wired pair using the bundled cable, which happens to be quite a robust little lead thanks to the braiding. That cable also comes with a built-in microphone, which is a nice addition, and means you can take phone calls without having to dig your phone out of your pocket.

And you may be reaching for that cable more often that you would with other headphones. Marley claims the RISE BTs come with a 12-hour battery life on the box, but on the website, it says 10. Either way, considering the admittedly more expensive Marshall MIDs come with a 30-hour battery life, and the £149 Plantronics BackBeat PROs will last you 24 hours, it would have been nice if Marley could have upped the battery life here. 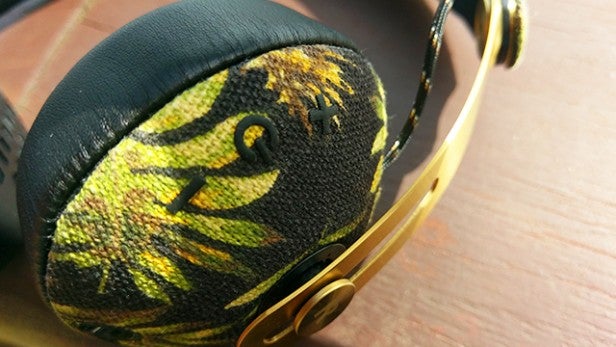 There’s also no active noise cancelling here, so the isolation isn’t really anything to get too excited about. Lower frequencies from the outside world seem to make it through the passive noise isolation that comes from the padded cups, but you’ll get a fairly even drop in the noise level once you don the RISE BTs.

And once that heavy bass kicks in, you won’t be hearing too much of the real world anyway.

Marley has provided a 15Hz – 22kHz frequency response, which is exactly what you’ll find on the more expensive AKG N60s. There’s no doubt the star of the show here is the bass, which has been heavily boosted, as is the fashion these days. It makes for a full sound, but not the most subtle or nuanced audio experience.

Often the bass just seems intrusive. It certainly helps the fatten the sound, but it’s not the most detailed bass response, and can sometimes be overpowering. As a result, though the sound is generally quite full, it often feels slightly dull. Switching between the RISE BTs and the newly launched £219 Marshall Monitor Bluetooth over-ear pairs, it became quite obvious how lacking Marley’s set were in the treble department, regardless of the bass’s impact.

Higher frequencies often get drowned out by the low end, but I’m not convinced dialling down the bass would leave you with the crispest treble sound either. The RISE BTs definitely struggle to deliver sharper tones, and even the mids sound a little muted. A bit of messing around with an EQ on the software side can help, but it would have been nice to have some slightly better treble out the box. 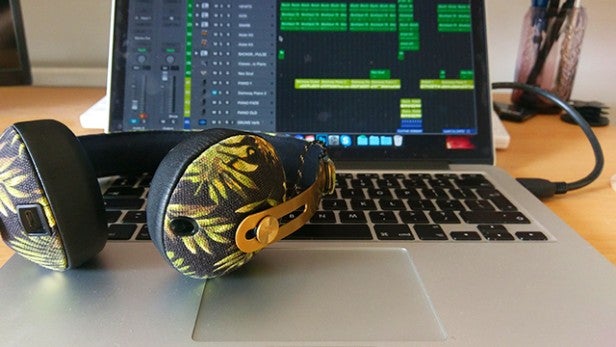 These things ain’t made for mixing

Still, it’s worth bearing in mind this is a £100 set of phones, so you’re not going to be getting the crystal clear sound you’d expect from pricier pairs. Marley says that all its products are “engineered to deliver all genres of music to the listener with as much energy, emotion, inflection, nuance and attitude as the original performance”. But the nuance claim doesn’t quite hold up here, thanks to those heavily-boosted bass frequencies – these are definitely a set of headphones for those who can’t get enough low-end and don’t really mind a lack of treble.

If you don’t mind the boosted bass, the RISE BTs are just ok. Just don’t expect the kind of clarity provided by slightly more expensive pairs. And it’s worth noting the AKG Y50s also offer enhanced bass and decent sound quality for just £69. 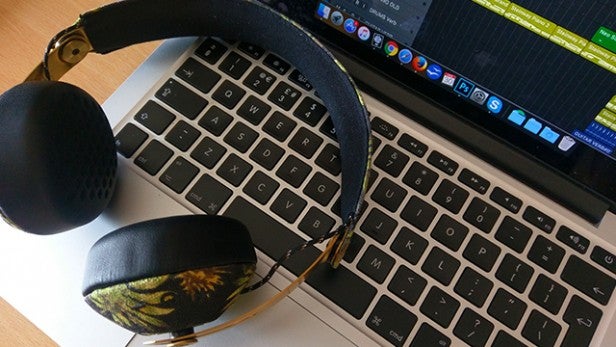 Should I buy the House of Marley RISE BT?

If you like enhanced bass, the Marley RISE BTs are an adequate on-ear option. Cheaper than a set of Beats Solo Wireless 3 and the new Marshall MID Bluetooth headphones, Marley’s latest Bluetooth cans are surprisingly well built for a set under £100.

Battery life isn’t quite as impressive as the claimed 30 hours on the newly launched Marshall Monitor Bluetooth headphones. But the RISE BTs do seem to last the full 10 hours that Marley claims on a single charge.

The sound is heavily skewed in favour of the lower frequencies, as is the trend these days, and while audio sounds full, it’s certainly lacking in the treble department, with even the mids leaving a lot to be desired. But, if you like extra bass, and I mean really like it, the RISE BTs offer an affordable way of getting your lower-end fix, in a well built product that’s easy to set up, and provides a reliable Bluetooth connection.

Nicely built, the RISE BTs offer bass-heavy sound with reliable Bluetooth at an affordable price. But a lack of quality treble response or any kind of nuance lets them down.