What is the Huawei Ascend Mate 7?

The Huawei Ascend Mate 7 is a very large phone, one whose display is close to tablet-like proportions. Gamers and those who like to watch videos on the way to work should have an instant interest in such a phone.

And, contrary to what the name suggests, it’s definitely phone-sized: the screen is six inches across, not seven.

As is so often the case with Huawei phones, you need to fiddle with the Huawei Ascend Mate 7 to iron out a few weird tweaks that have been applied. But with a little effort, this is one of the best large-screen phones money can buy. At £400, it’s a good lower-cost alternative to the Samsung Galaxy Note 4.

Huawei is not a master of design. Often its inspirations are all-too apparent, and the original motifs it devises tend to be a little wonky. But it’s getting better, and the Mate 7 is certainly one of the best Huawei phones yet.

The Huawei Ascend Mate 7 has a look very similar to the HTC One Max. It’s imposing, mostly metal and has a fingerprint scanner on the back. A paragon of simplicity it is not.

However, aside from a slight lack of originality the design is remarkably good. Here’s the important bit – for a 6-inch screen phone, it’s very easy to use. 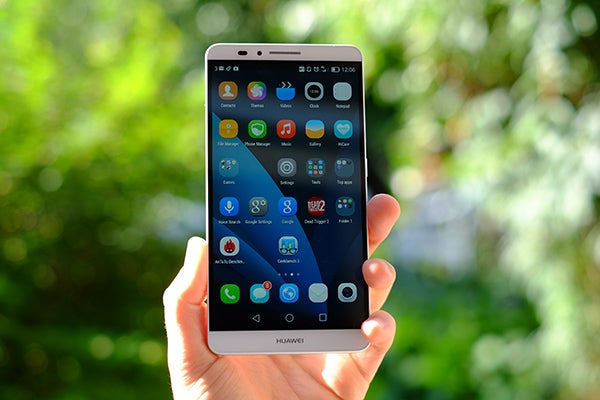 A handful of clever choices ensure this, and while not exactly a surprise, it is a relief after the Huawei Ascend P7, which seemed to value being thin over being enjoyable to use day-to-day. That phone missed the point. This one gets it, or at least seems to.

The first important bit is that the Huawei Ascend Mate 7 is clearly as much all-screen as the company could manage. Bezels are super-thin and there’s very little expanse above or below the display.

For empirical evidence – the Mate 7 is just 0.5mm wider than the 5.5-inch Samsung Galaxy Note 2. Granted, you’ll find much greater differences compared to phones of 2014 such as the LG G3, but clear effort has been put into making the phone as manageable as possible.

It’s not just the width, but the height too. This phone is thinner, shorter and less wide than its predecessor the Ascend Mate 2.

To make this possible, the soft keys are built into the software, and despite the current trend for front speakers, the Mate 7 keeps its one on the rear to ensure it doesn’t add more bulk. The result is a phone that’s 7.5mm less tall than the HTC One Max, a phone we found to be flat-out too big at the time.

The Mate 7 is big, but not too big. Now that phones are that bit thinner, bezels that bit smaller, we’re at last finding 6-inch phones that we don’t wish we could shrink down. 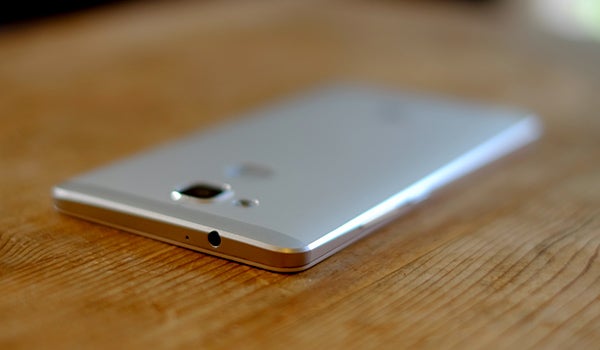 Huawei has also put the soft keys towards the centre of the screen to make them easier to reach, and it works. Obviously, the Huawei Ascend Mate 7 remains a handful, but this is among the most accessible 6-inch phones to date.

It also feels good. About 85 per cent of the back is anodised aluminium, with just a couple of plastic bungs on the end to house the antennas, which would have trouble transmitting through metal. Build quality isn’t quite Apple-grade on closer inspection – in our sample the ‘volume up’ key lost its clickiness after a few days of use, but we assume this is an unfortunate fault with our sample (it is labelled an Engineering Sample, so this seems likely).

Much like the soft keys, the power button is placed within reach of your digit (right thumb in this case), and the phone’s super-slim 7.9mm body adds to how breezy this phone feels to use. Yes, we’ve complained about Huawei’s obsession with slimness in the past, but in a 6-inch phone, cuts to every dimension are appreciated. 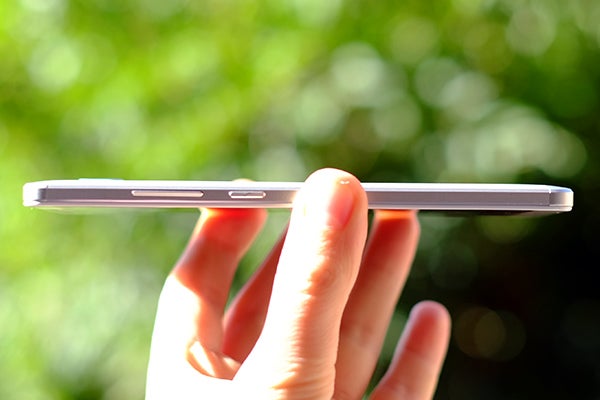 After first noticing the similarities with the HTC One Max, we were worried about the Huawei Ascend Mate 7’s fingerprint scanner. The HTC’s was so particular it became a nightmare to use.

First, the Huawei Ascend Mate 7 does not make you move a finger over the scanner, just place it on there. And it scans your entire fingerprint when calibrating, rather than just the central part.

As such it’s able to be much more forgiving of fingerprints placed at an angle or non-centrally. I still experienced plenty of ‘non-recognised fingerprint’ messages, but it automatically rescans without any extra interaction required within a fraction of a second. It easily achieves the main fingerprint scanner goal of outpacing a typed-in passcode, which the HTC One Max and Samsung Galaxy S5 fail at, in our experience. 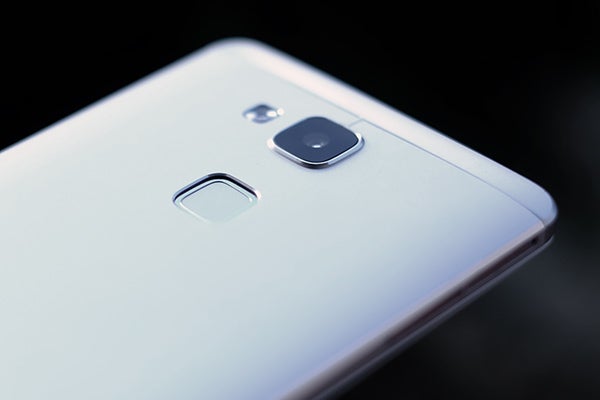 The scanner also sits in just about the perfect position for your forefinger, and is recessed by a full millimetre or so, making blind operation a doddle. It works without getting near the power button too. Huawei rarely shows the big players of Android how things are done, but it certainly has with the Ascend Mate 7’s fingerprint scanner.

Other less interesting aspects of the phone still worth noting include that it uses dual pop-out trays for microSIM and microSD cards on the left edge. You get a reasonable 16GB of storage in the phone, but a memory card slot boosts up its media cred several notches.