Microsoft has been making big promises about Windows 10 Mobile for more than a year now. These have ranged from lofty claims about a new category of “Universal Apps”, iris-scanning Windows Hello tech and, of course, the Lumia range’s trademark PureView camera hardware.

The sheer number of promises have left many wondering if the company’s flagship Windows 10 Mobile phablet can actually live up to the claims. Sadly, the answer is not really.

Since Nokia, now Microsoft Devices, launched its first Windows Phone 7 smartphone – the Lumia 800 – many moons ago, the firm has rattled out a stream of unique-looking, brightly coloured handsets.

I’d hoped this trend would continue with the Lumia 950 XL, but sadly this isn’t the case. The black Lumia 950 XL on review is one of the dullest-looking phones I’ve held in quite some time. The phone lacks any obvious design features, save the shiny PureView camera sensor on its rear.

The polycarbonate casing doesn’t feel as robust as past Lumias; pressing on the phone’s removable backplate displayed more give than I’d like. Note that removing this rear shell isn’t for the faint-hearted either. Whenever I pried off the rear plate to get access to the phone’s microSD and SIM slots, it felt as though it was on the verge of snapping.

Once setup, though, the phone does tick many boxes. There’s a USB Type-C connector along its bottom edge, which in the coming months is forecast to replace micro-USB as the smartphone’s standard connector.

The power, volume and shutter buttons are well placed, so you can still reach them one-handed despite the phone’s plus-sized 152 x 78 x 8.1mm dimensions. The 165g weight means the 950 XL isn’t too heavy; the phone never feels cumbersome to hold. 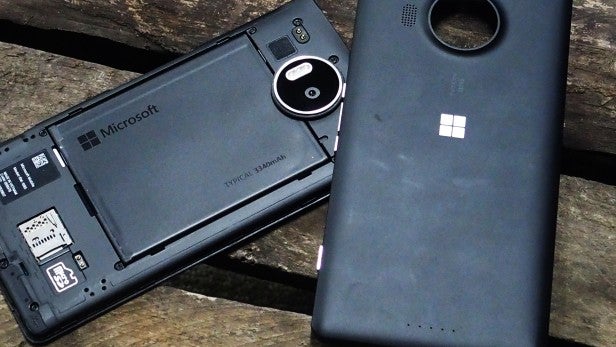 Microsoft has loaded the Lumia 950 XL with an impressive 5.7-inch quad-HD, AMOLED display.

On paper, this puts the Lumia on a level-pegging with most competing plus-sized handsets. Google’s awesome Nexus 6P and Samsung’s reigning Galaxy Note 5 both feature similarly specced 5.7-inch QHD displays.

In real-world use, the Lumia 950 XL’s display easily matches its competitors. The screen’s 518ppi density ensures Live Tiles and text look universally sharp. The AMOLED tech also results in blacks that are among the deepest I’ve seen on a smartphone, and help to make colours look vibrant and rich. Whites do look a little red when compared to the Nexus 6P, but are far from the worst I’ve seen.

Although brightness isn’t the highest I’ve seen, it’s good enough for general use. Direct sunlight can result in the screen becoming reflective and therefore difficult to use, but that’s a universal issue affecting most of the smartphones I test.