What is Windows 10 Mobile?

Windows 10 Mobile is Microsoft’s
latest attempt to address the shortage of apps being developed for its
smartphones and ignite consumer interest in its platform.

It
aims to do this by unifying the desktop and mobile versions of
Microsoft’s OS – in theory, developers will then be able to use the same
core code to create special “Universal Applications” that run on
desktop and mobile. The unification process also adds a nifty new
“Continuum” feature, which lets you turn Windows 10 smartphones into
compute sticks via a special Display Dock.

The features sound
great, but with most core Microsoft apps now on iOS and Android, some
have justifiably questioned whether there’s any reason to jump ship to
Windows 10 Mobile. The answer for now is not really – although in a few
months this could change.

I tested WIndows 10 on Microsoft’s latest Lumia 950XL phablet having played with each beta release on a Lumia 535.

At
first glance, the user interface looks fairly similar to Windows 8.1.
It retains the vibrant Live Tile homescreen of its predecessor, which in
my mind is no bad thing. Live Tiles are a nifty alternative to iOS and
Android’s widget and icon-heavy UIs.

They make it easier to keep
on top of things by offering peek views to incoming messages and alerts.
The native Outlook email tile will display the sender and subject line
of the last message to enter your inbox, for example, while the Facebook
app offers a peek view of your latest alert.

For
those who prefer a more traditional mobile experience, the Action
Centre offers similar quick notification shortcuts to Google’s Android
OS. It’s accessed by scrolling down from the top of the phone’s UI and
features shortcuts to key options, such as Bluetooth, Wi-Fi and screen
brightness, as well as notifications from linked social media and email
accounts. As an added perk it also lets you directly respond to alerts
without launching the applications.

Cortana makes a welcome a
reappearance too. Microsoft’s answer to Apple’s Siri and Google’s Now
voice command services, Cortana can be activated using a Live Tile on
the phone’s menu screen, or directly from within certain applications.
When launched you can either type or speak commands.

As well as
enacting basic tasks, such as mounting web searches and opening
applications, Cortana can contextually answer questions and take
specific actions within apps. I regularly used her to get directions,
estimate travel times and find good eateries in my area using Windows
10’s reworked Maps app. I also used her to take notes in OneNote, add
entries to my calendar and draft emails while on the move.

On
paper, Siri and Google Now offer similar services, but I found Cortana
works better on almost every level. Her voice-recognition software is
stronger and proved capable of understanding accents that have rendered
Siri useless – tested with an Afrikaans-accented friend on the Lumia 950
XL.

To existing Windows Phone fans, this may sound a little too
much like business as usual. But, when you dive into the phone’s
submenus, you realise Microsoft has made some small, but positive
changes to Windows 10 Mobile’s design.

The majority of the changes work to unify the look of Windows 10’s desktop and mobile versions.

The
two menu screens are now identical. The Store has also been updated to
resemble the desktop and Xbox Live versions. It adds a new vertical
submenu with shortcuts to the app, games, music and film sections, and
an enhanced spotlight feature for recommended content.

The
changes may sound insignificant, but for me they’re a real positive. The
move to make Windows 10 Mobile’s UI consistent with Microsoft’s desktop
and Xbox software makes the OS one of the most intuitive to use on the
market. However, the lack of significant change is a two-edged sword
when you starting diving into most third-party applications – which
haven’t benefited from the same spruce-up. 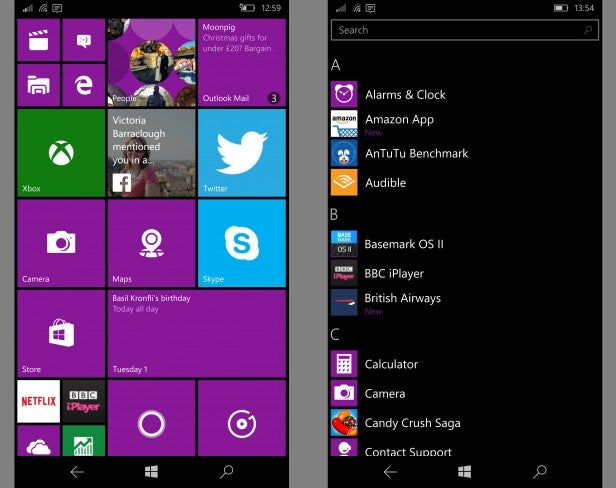 Developers
generally viewed Windows Phone 8.1 as being of secondary importance to
iOS and Android, despite Microsoft’s best efforts. As a result, Windows
Phone 8.1’s app offering never came close to matching that of iOS or
Android.

During its shelf life, popular apps such as Instagram
and Vine took months to even partially launch on the platform following
their appearance on iOS and Android. Third-party apps on the Windows
Phone also suffered woefully worse update cycles than their iOS and
Android versions. Time and time again, Windows Phone users would miss
out on cool new features even if the apps did appear.

Microsoft
has aimed to fix this on Windows 10 using “Universal Apps”. Universal
Apps are a big part of Microsoft’s promise to create a “truly
cross-device” operating system. They refer to a new generation of
applications that can run on multiple device types using a single common
code.

Microsoft claims the ability to use a common core code
will make it easier for developers to port or create Windows 10 Mobile
applications and create a consistent, “touch-first” experience across
phone, tablet and PC.

On paper this sounds great, and Microsoft
has already begun to migrate core services, such as Office, to become
Universal Apps. But I’m yet to see the Universal Application gamble pay
off on Windows 10 Mobile with third-party developers.

Windows 10
Mobile’s application offering remains a little hit and miss. Key apps
still aren’t there. Even Instagram is still in its beta form, and a
number of the big apps that are on WIndows 10 Mobile feel a little
archaic compared to their iOS and Android counterparts.

Facebook
is one of a number of companies confirmed to be working on a Universal
App. For the moment, however, users are stuck with the dedicated Windows
Phone version. This is a problem, as the mobile version looks like it
hasn’t had a significant update since the days Microsoft Devices was
called Nokia. Icons are huge and the newsfeed looks overly blown up,
giving it a slightly childish feel. 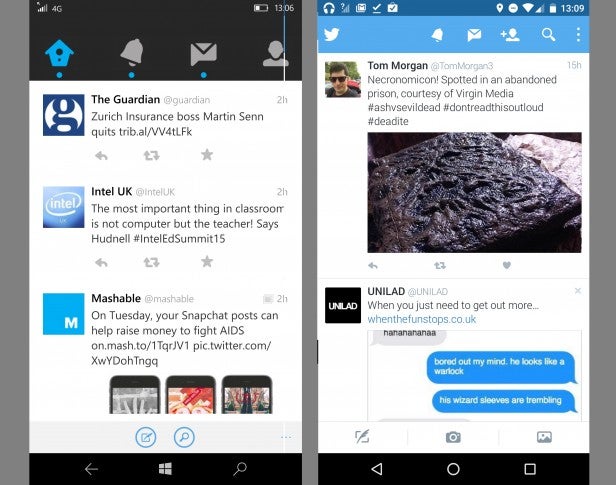 The
BBC iPlayer app is a particularly bad offender, and is missing several
of the service’s newer features. The worst is the missing account login
option, whose absence means regular users won’t be able to easily access
their favorite content, or get tailored recommendations.

This
isn’t a problem for business smartphone users – who are pretty much
covered by Microsoft’s Office 365 suite and Windows 10’s advanced mobile
device management and security services. But for now, the app offering
isn’t up to scratch for most consumers. Hopefully this will change in
the future and Microsoft’s Universal Apps gambit will pay off.

I’ll
be keeping my eyes peeled over the coming months and will update this
review as and when significant new apps appear on Windows 10 Mobile.