The LG GX Gallery series is hands down the best looking OLED 4K TV you can hang on your wall right now, and its AI enhanced picture quality is class-leading. But the price premium over the similar LG CX is steep, and there’s no Freeview Play…

While it shares an identical panel and picture processing specification to its more affordable CX stablemate, it warrants the top slot thanks to a single-depth (20mm) design that allows it to hang flush against the wall.

The GX gallery is unquestionably premium looking. Cosmetics and finish are top notch.

As the bezel is just 5mm thin, it gives the impression that its images float in space. Of course, the GX doesn’t have to be wall-mounted. You can perch it on an AV rack in the time-honoured fashion, although you’ll need to buy a pair of optional feet to keep it upright (these’ll set you back another £99).

All HDMI inputs support 4K@120Hz, which makes the TV a good option if you’re looking to upgrade to a next gen console like the PS5 or Xbox Series X. Indeed, it’s well suited for gaming in general, with ALLM (Auto low Latency Mode) and VRR (Variable Refresh Rate). PC enthusiasts can take advantage of NVIDIA G-Sync.

For such a futuristic flatscreen, it’s perhaps surprising to find Freeview Play missing. This means the set arrives without any mainstream catch-up TV apps on board. The company says it’s negotiating to add individual channel players to its webOS smart platform, but the absence of an up to date terrestrial tuner does seem a bit odd.

LG has also made its Bean Bird mascot redundant, ostensibly in order to simplify installation. We kinda miss the little guy.

LG’s webOS smart TV platform has seen some minor tweaks, but generally looks much as before. It’s home to all the popular streaming content apps, including Disney Plus. 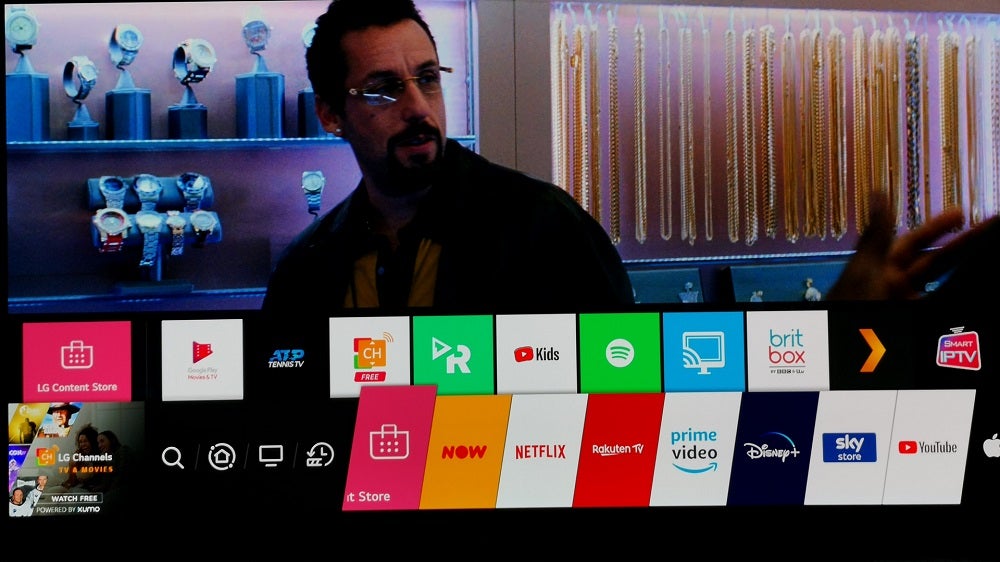 New attractions this year are Filmmaker Mode and Dolby Vision IQ. The former is a cross manufacturer initiative, driven by the UHD Alliance, which allows you to watch movies with settings akin to those seen in Hollywood mastering suite. Filmmaker Mode has received numerous endorsements from the filmmaking community, and clearly has purist appeal.

Dolby Vision IQ is slightly different, in that it allows the screen to present Dolby Vision HDR without compromising shadow detail and image subtleties in rooms with ambient light. Rather confusingly, there’s no specific Dolby Vision IQ label, instead the feature masquerades as a Dolby Vision image preset, working in conjunction with the set’s AI brightness control function and ambient light sensor. You’ll soon forget it’s even there, which is probably a good thing.

One aspect of the GX that doesn’t disappoint is image quality. Pictures look positively sumptuous, with superb contrast, excellent near black detail and lush colour fidelity. Obviously, what you see is governed by the various image presets available, so choose carefully. Some allow the screen to (literally) shine, while others constrain quite aggressively.

Presets include Cinema, Sports, HDR effect, ISF expert for Bright Room and Dark Room, Vivid and Standard. For those who don’t intend to chop and change, the latter is invariably the best option. 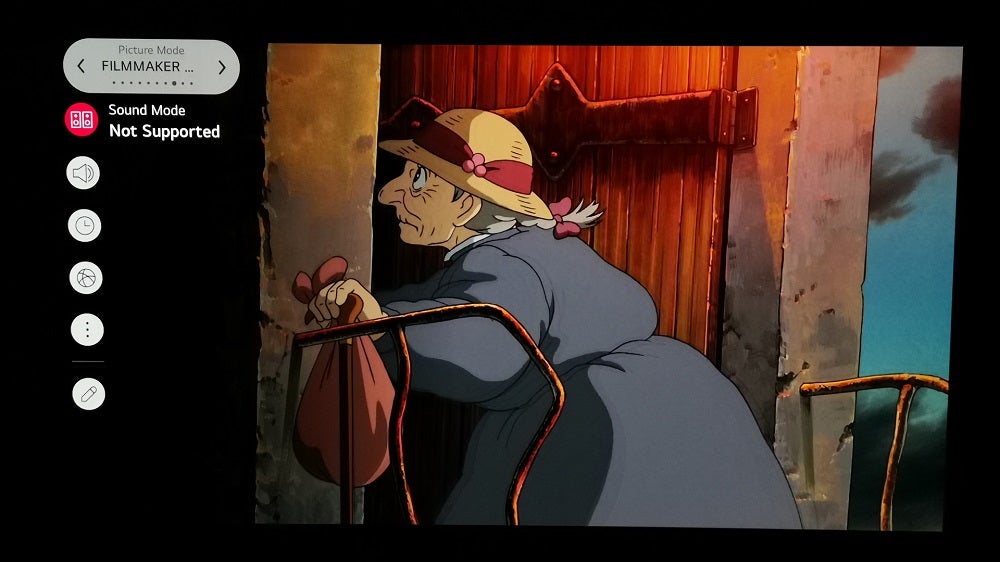 Filmmaker Mode is the most contentious addition. The aim to replicate a studio mastering monitor may be laudable, but in the process picture processing and noise reduction have been benched. With HD SDR content, the mode also drags overall image level brightness down to 100 nits – and that’s dim. Christopher Nolan might approve, but casual viewers will be less impressed.

The GX, apparently, will auto switch to Filmmaker Mode, when there’s a metadata flag telling it to. As yet, this doesn’t exist, so instead, it needs to be treated like any other image preset.

LG’s Alpha 9 Gen 3 image processor does a phenomenal job on both HD and 4K content sources. Feed the set something truly extraordinary, like the 4K@60fps presentation of Gemini Man (UHD Blu-ray), and panel clarity really excels. Long lingering close-ups of Will Smith’s face seem almost 3-dimensional, while the sheer amount of detail held in the ‘shooter on the roof’ sequence is mesmerising. 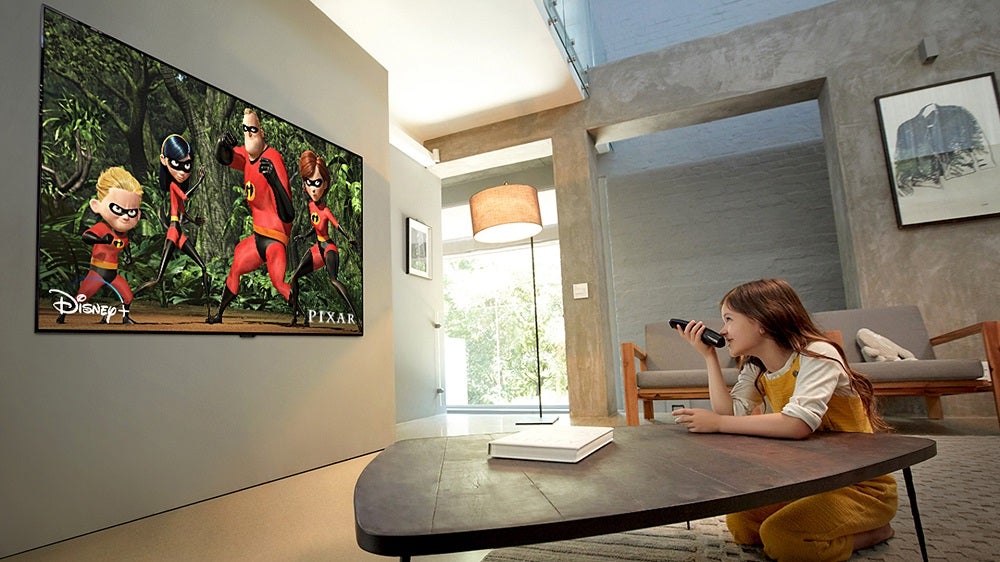 The GX OLED supports Dolby Vision, regular HDR10 and HLG, as now used by Sky Q. There’s no support for HDR10+ though.

Overall HDR performance is in line with expectations, although we’ve seen brighter. We measured HDR peak brightness at around 750 nits (cd/m2) in Standard mode, which allows specular highlights (bright street lights, reflections, car headlights and so forth) to ping from the picture. Opt to watch movies on LG’s Cinema setting, and HDR peak output drops to around 650 nits. Embrace the oversaturation of Vivid mode, and HDR peaks get a corresponding boost.

The GX may lack any fancy audio innovations, but it doesn’t sound half bad for a flatscreen. There’s a claimed 60w of total amplification on-board, and it certainly makes a fair noise. Just as AI plays a role with picture performance, the GX comes with AI Sound Pro, which creates a more pronounced soundstage and adds a bit of mid-range weight.

You should buy the LG OLED65GX if…

If your interior designer insists you have the slickest wall-mounted OLED money can buy, then look no further.

Designed for seamless wall-mounting and a treat to look at, the GX more than warrants its high-end ‘Gallery’ handle.

You shouldn’t buy the LG OLED65GX if…

The set’s good looks come at a price premium, especially considering that identical image performance can be had for less within LG’s own 2020 TV line-up.

While LG has added a few of the UK catch-up apps to webOS, the lack of Freeview Play tuner just seems careless…

No, the LG OLED65GX does not have voice control.