The new version of the G Flex was announced at CES 2015. Check out our hands-on of the LG G Flex 2 here.

What is the LG G Flex?

The LG G Flex is not a normal phone. It’s not here to square up to mobiles like the Samsung Galaxy S5. It is here to prove a point, to prove that certain things can be done. It is a curved phone with a self-healing back. It’s a mutant, a weirdo – a proof of concept, if not quite a statement of intent for the rest of LG’s 2014 phones.

As a demo of new technologies it’s interesting. However, as a phone you’ll have to pay more than £500 for, it’s a no-go 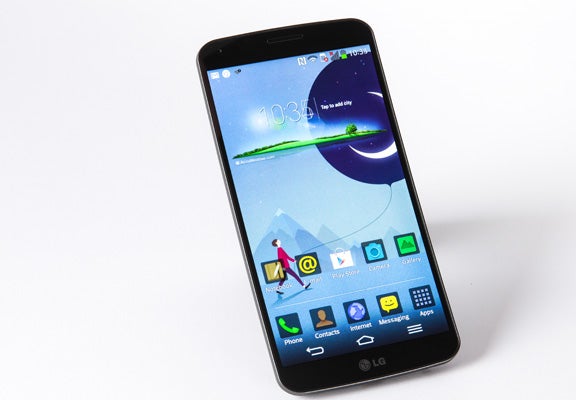 The LG G Flex’s curved screen is its spotlight-stealing feature. However, its sheer size is also worth noticing. This is a 6-inch phone, sitting in the awkward middle ground between a phone and a tablet.

It’s 81mm wide, making it feel gigantic even when compared with big 5-inch phones like the Samsung Galaxy S4. Despite having a skinny bezel, reaching from one end of the screen to the other will be either tricky or impossible – depending on how big your digits are. 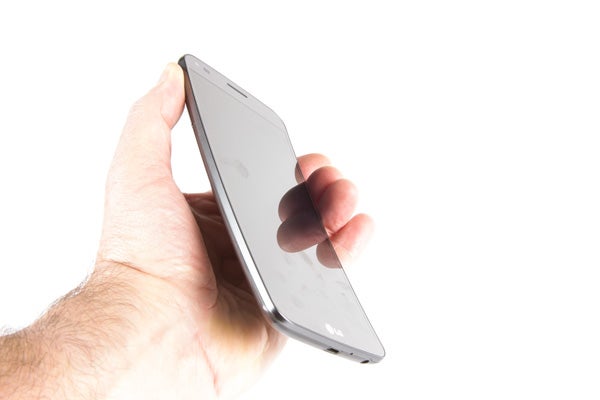 This is a plastic phone, pretty predictable given its bendy design, and the faux-metal glossy plastic finish doesn’t give you the surest grip either. The LG G Flex demands a degree of caution.

Its initial appearance even takes some getting used to. This is the first curved phone to get a general release, and that it doesn’t sit flat seems deeply odd at first. Some will say it looks broken, others that it looks weird or ridiculous. But there’s no chance of a measured, neutral reaction when it comes to the LG G Flex. It’s an attention-grabber.

There are two main questions the curve raises – how, and why? We’re going to try and answer both. 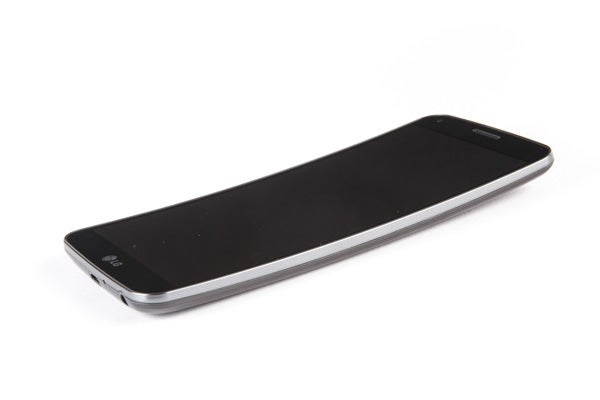 How did LG make a curved phone?

There are several elements that allow the LG G Flex to have a curvy screen. The most talked-about is the relatively new sort of screen it uses.

The LG G Flex has a P-OLED screen. The core OLED display tech is comparable to the OLED you see in phones like the Galaxy S4. It uses pixels that emit their own light, meaning there’s no need for side-firing backlight LEDs – which probably wouldn’t work too well on a curvy screen.

However, the core difference is that while most OLEDs have a glass backing or substrate – as is the more technical term – the G Flex’s is plastic. And plastic is bendy.

A few other bits have to be curved and flexible too – the battery and the top layer of the screen. The G Flex has what LG claims to be the world’s first curved battery. You can’t pop off the back of the phone to have a look, but the battery curves around the frame to fill any empty space. LG’s battery bods have worked on a new internal structure for the battery that makes all this possible. Clever stuff. 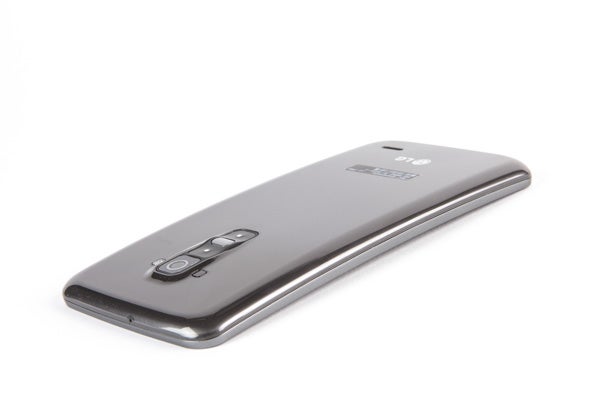 The last bit of curvy cleverness is down to Corning, not LG. It makes the curved plate of Gorilla Glass that covers the phone’s top layer. Yes, this is bendy, flexible glass.

It works more as a showcase of quite how great Corning’s work into toughened glass is. Standard Gorilla Glass can withstand being bent out of shape without shattering, but with a ‘straight’ phone this is never shown off.  Gorilla Glass is used in a great many phones, often without Corning getting much credit or recognition.

The combination of a plastic OLED screen, the curvy battery and curved Gorilla Glass let the G Flex keep its curve. And the phone can be pressed flat without any damage. You can do it with your hands – no clamps needed here.

Repeated flexing of the display reportedly causes two dots to appear on the display – the result of internal components press against the panel. However, LG has recognised the issue and says it should fade without lasting damage.

We’ve flexed the phone liberally a half-dozen times or so and had no such issues, though. 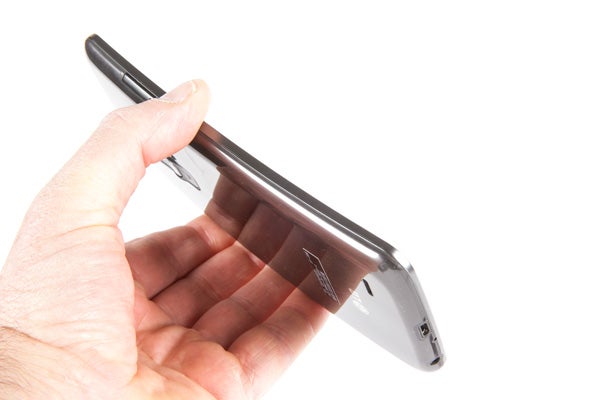 Why is the G Flex cuved?

A curvy screen has won the LG G Flex a bunch of attention. But the most common question it raises is – why? LG offers a bunch of different reasons.

Its curved display has a slight IMAX-like effect – where the screen’s bend matches the curvature of your field of view to an extent. Held about 30cm from your face, the screen does offer pretty great coverage of your vision compared with a (relatively) tiny iPhone 5S, or even the Galaxy S4.

However, it’s predominantly the screen size that makes the G Flex a phone we can imagine watching a film on, not its curvy style. 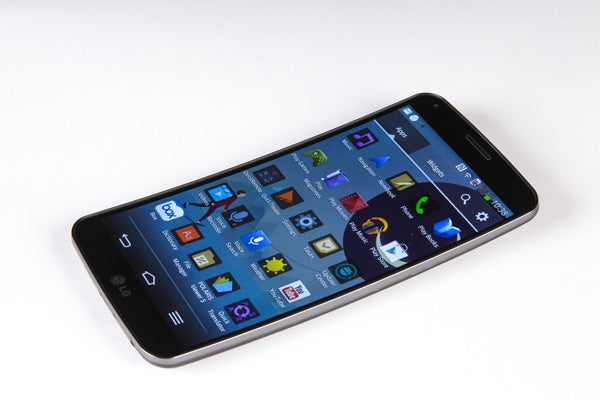 Argument number two is about your bum. LG says the G Flex can be sat on without damage, and it’s no lie. Put in in your back pocket and you won’t have to worry about shattering the display. However, this is for peace of mind purposes only. It is not comfortable to sit on.

Argument three is about screen reflections, and this one does hold up better. The G Flex’s display is as reflective as any top-end phone (i.e. quite reflective), however the curve means that a good portion of the screen is reflecting nothing more than a slightly distorted version of your face. Unless there’s a light source directly behind you, it shouldn’t pose a serious problem. It doesn’t solve the screen reflection issue, but does make it easier to deal with. 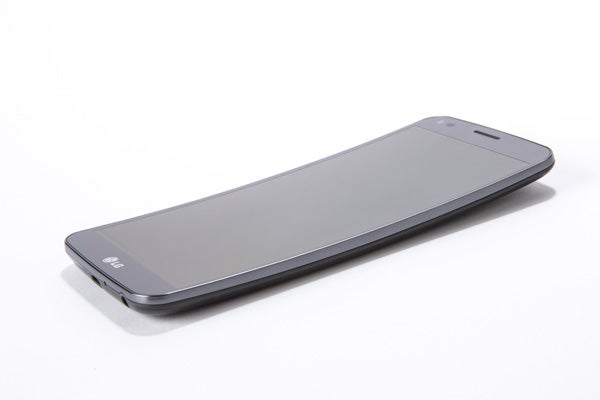 The real reason why the curve of the G Flex is important, though, is that it acts as a declaration that LG is a leader in innovative mobile technologies. It doesn’t want to be seen as a small player anymore.

Its release is also a response to the Samsung Galaxy Round, to some extent. This rival is a curved but non-flexible AMOLED phone, but you won’t find it on shelves in the UK. The LG G Flex is a curved and flexible phone that you can actually buy. LG has gone a few steps further.

Used as our main phone for the review period
Reviewed using respected industry benchmarks and real world testing
Always has a SIM card installed
Tested with phone calls, games and popular apps
Next
Design and Self-healing Back Review