The LG Flex 2 is the Korean company’s second stab at a curved smartphone. Unlike the Galaxy Note Edge, this is a phone that’s all curve from the screen to the predominantly plastic body. The original G Flex was packed with innovative, albeit ultimately flawed, tech and in its second coming, LG seems to have learned its lesson.

While the jury is still out on whether curved smartphones are really the future, especially when LG told us it’s running out of ideas for different phone designs, it’s actually the performance that’s the biggest talking point of the G Flex 2.

We spent some time with pre-production models from Korea and the UK to see what the LG G Flex 2 is made of. 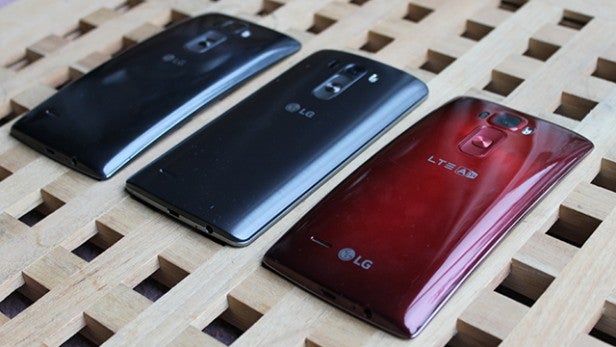 So about that curve. The argument for curved smartphones is much like curved TVs. Are there really any true benefits? LG thinks there are a few, but we’re not entirely sold on any of them right now.

The Flex 2 uses a combination of four curvatures to make up the unique design. Up front, the screen has a 700mm radius of curvature, matching the original G Flex, while on the top and the bottom there’s a 500mm curve and a 400mm one on the left and right sides. Add those all together and you get a smartphone that sits more naturally against the side of your face, inside a pocket and in your hand. Well, that’s the theory at least.

Does it dramatically change the way you hold the phone? It does, but it’s not necessarily for the better. It does make some sense when you’re taking a call and the curve has a slightly better fit if you carry your phone in your back pocket, but on a day-to-day basis it just didn’t feel all that different. Put a Galaxy S5 or an iPhone 6 in your hand, then hold the LG G Flex 2 and we doubt you’ll see any ergonomic advantage to the curve. 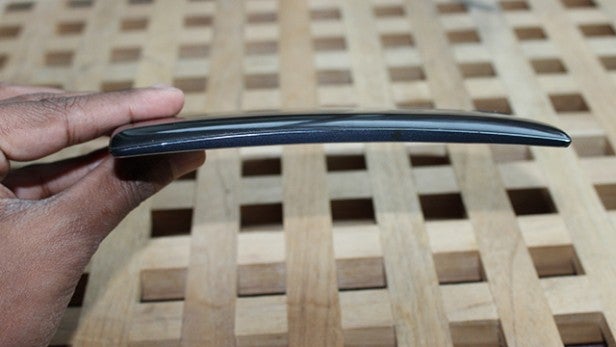 The curve isn’t the only unique feature of the Flex 2. It can also flex, as the name suggests, and can offer the kind of robustness you simply won’t find with other phones. We tried to sit on it with the phone in our back pocket and it’s safe to say that there are no “bendgate” issues here. While we wouldn’t suggest putting the G Flex 2 under abnormal levels of pressure, it’s refreshing to know that it’s built to cope well with flexing.

It’s no surprise to see plenty of LG G3-inspired features included, like the improved back buttons and rear speaker to create that more attractive, uncluttered look. Up front, the G Flex 2 matches the G3 with a slim screen bezel down the sides and a sizeable microphone up top. Having the headphone jack at the bottom is slightly irritating, but it’s something we can live with. Measuring in at 9.4mm thick and weighing 152g, it’s not as slim or light as the G3 (8.9mm and 149g), but it’s doesn’t make it an entirely chunkier prospect to hold or slip into your pocket.

The glossy plastic back plate isn’t one of our favourite features. We can appreciate that the bendy nature of the G Flex 2’s design dictates the use of plastic, but the almost laminated effect could definitely be taken down a notch. We tried out the red G Flex 2, which will only be available in Asian markets, alongside the black model, and the shiny back is as eye-grabbing as the curvaceous body. The black Flex 2 keeps things slightly more low-key, but in both versions you’d struggle to appreciate the spin hairline finish that LG has made a very big deal about. 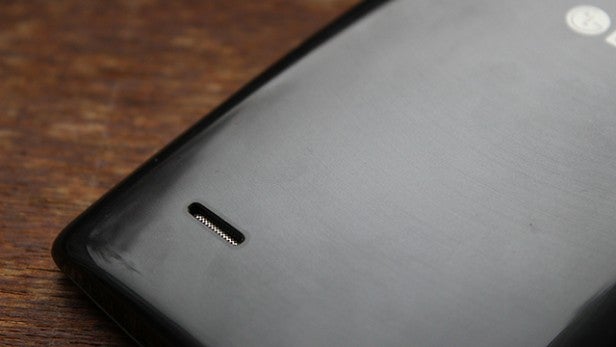 The back is removable and is now where you’ll find the Micro SIM card, which has moved from the edge of the phone. It’s also where the non-removable curved battery lies and the new addition of a microSD card slot, which can boost internal storage up to an impressive 2TB. Good luck trying to find a microSD card with that capacity, though. There’s 32GB of built-in storage and around 21GB is available for use, compared to the 23.8GB available in the G Flex.

Like the G Flex, the G Flex 2 also has self-healing qualities. That’s comes courtesy of a protective film that sits on top of the back plate and can protect against scratches, with LG claiming that a scuff from your keys or coins will disappear in 10 seconds. It didn’t, however, take very long to see that this isn’t the magical technology LG claims. Within just one day living inside our jeans pocket, it picked up a scratch about the width of our thumb and it has yet to disappear, as the image above shows.

For a curved, flexible phone durability is pretty important, so LG has applied a Gorilla Glass 3 coating over the plastic OLED panel that also has LG’s own Dura Guard Glass treatment. This new approach aims to spread the protection more evenly across the screen, as opposed to the centre of it.

One of the most disappointing features of the G Flex was the screen resolution. Spreading 720p HD resolution across a large 6-inch screen, resulting in 245ppi pixel density, was never going to be a winner. Thankfully, LG has addressed this, dropping down to a more manageable 5.5-inch screen matching the LG G3, while bumping up the resolution to Full HD 1080p. That’s right, there’s no 2K QHD display, which is surprising considering this was the direction LG took with last year’s flagship.

It’s the same plastic OLED (or P-OLED) display technology used with the G Flex and even in the LG’s G Watch R Android Wear smartwatch. Unlike standard OLED glass displays you’ll find on phones like the Samsung Galaxy S5, this allows the Flex 2 to be more flexible. If you attempted to bend a glass OLED screen in the same way, you’d break it.

Aside from the added durability, you still get the great benefits from an OLED display, such as exceptional brightness, vastly superior colour gamut and impressive contrast ratio. You can adjust screen modes from standard, vivid and natural modes, but it’s well equipped in the normal standard mode. 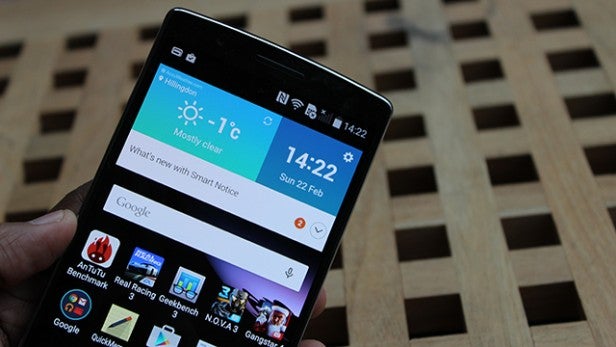 The G Flex 2’s screen is a beauty. It’s sharp, black levels really impress for watching films, and viewing angles are excellent. The 403ppi pixel density of the 5.5-inch screen means it impresses for clarity as well. If you’re wondering how much you’re missing out from not having a 2K QHD display like the LG G3’s, we’d say there is a difference, but most won’t really notice it. We squared the pair up next to each other, streaming the same videos and viewing web pages, and you can spot the extra levels of sharpness and contrast on the G3.

We shouldn’t, of course, forget about the curve, which is supposed to create a more immersive viewing experience. In reality, it doesn’t work on a smartphone screen, or at least on the G Flex 2 it doesn’t. Watching YouTube and Netflix on a curved phone and a flat phone is really no different. The impact might be more impressive on bigger screens, but right now, it’s not doing much for a 5.5-inch display.