To summarise the differences between the LG G2 and LG G Flex Android phones in the least charitable way, the LG G2 is a normal phone that has specs that sensibly match-up with the big competition like the Samsung Galaxy S4 and HTC One. The LG G Flex is a more expensive but not radically superior phone that is a showcase for flashy new technologies, and you do have to pay extra for them.

Let’s take a closer look at these extras, and see how they really compare to what you get in the more conventional LG G2.

The LG G Flex is one of the first phones to feature a bendy screen. It’s not just curved, it’s flexible. LG says this is both to enhance your viewing pleasure when watching films of TV on its giant 6-inch display, and to give it greater protection should you, for example, sit on it.

The display, the Gorilla glass that covers it and the battery unit inside are all curved and designed to withstand some manipulation – the phone can be ‘flattened’ and will spring back to more-or-less its original shape without any damage. However, bend it too much and odd bumps will start to appear on the screen. This is presumably some of the immovable parts of the G Flex pushing against the display under pressure. It’s not a phone that wants to be messed with, despire being ‘flexible’. 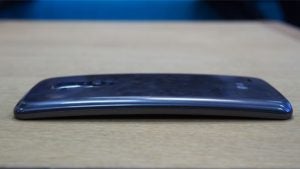 It’s a neat proof of concept, but we’re yet to be convinced a flexible screen is necessary, or all that much of a draw beyond the bragging rights it provides.

As well as being bendy, the LG G Flex screen is also a lot larger than the LG G2’s. It is six inches across, and compared to the 5.2-inch LG G2 it is fairly impractical. It’s difficult to use one-handed, and while the curvature of the phone helps with keeping the thing your pocket a little, it is certainly a pocket-filler.

The resolution of the LG G2 is actually a lot higher, despite being smaller, and part of a cheaper phone. It is 1080p, where the Flex has a 720p screen.

The Flex has a reasonable excuse – it uses an unusual P-OLED (often referred to as Plastic OLED) panel. Being based on a flexible plastic substrate is what enables the screen, and the phone, to flex.

Back closer to normality, the G2 uses a flat IPS-variant screen, and a very good one too. We do not think the Flex screen is better in most traditional respects, despite costing just over half as much as the Flex. 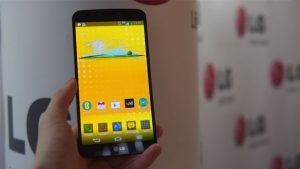 Sitting happily next to the bendy screen is the LG G Flex’s ‘self healing’ back. LG’s demos show the rear being scored with a brass brush, only for the cuts to be magically repaired within minutes.

We’re not sure about the exact material used here, but it seems to be a layer of some gel-like material that fills-in scratches as they occur. The optimal temperature for this reaction to occur is around 27 degrees centigrade (a bit warm for our climate) and it will not completely fix any deep scratches. Some claim it’s not really much good at healing any significant scuffs from impact damage too.

It’s good, and will protect the phone from key scratches to some extent, but if you’re expecting a miracle you are likely to be disappointed.

The phone does not have an easily removable rear, but taking it off can be done with a bit of effort. You can replace the cover if yours gets scratched to oblivion. What you’ll need is a little tool to help you lever the thing off, using the space left by the SIM tray (when removed, obviously) as your point of entry. This is the sort of technique phone repair places use when they need to get inside a phone. 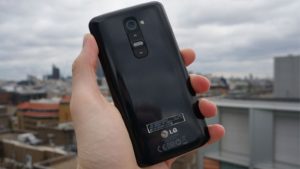 What is the same?

Aside from these stand-out features, the LG G2 and G Flex are fundamentally similar phones. They use the same Snapdragon 800 processor, have 2GB of RAM each and 32GB of non-expandable storage (there’s also a 16GB version of the LG G2).

They both run Android Jelly Bean, and they share a common custom LG interface. Hardware aside, the experience of using these two phones will be very similar. 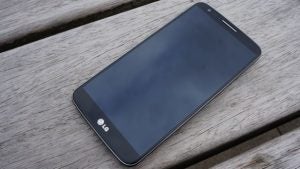 Where the LG G2 wins

There is one hardware area where the cheaper LG G2 is out on top and it’s the camera array. Both phones have 13-megapixel rear cameras and 2.1-megapixel front cameras. However, only the LG G2 has optical image stabilisation.

This is used most effectively in low-light conditions, where it allows longer exposure times to be used – resulting in less noisy, more colour-saturated photos. We imagine OIS may have been removed from the Flex in order to stop costs from spiralling, and because its impact would be lost in a phone that already has – seemingly – a bunch of USPs. However, some of you may prefer OIS to a slightly gimmicky self-healing back. 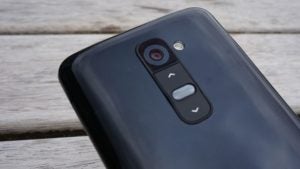 For the vast majority of people, the LG G2 is a much more sensible buy than the LG G Flex. It’s cheaper, has a better camera and has a higher-resolution screen. The LG G Flex is commendable in some respects as a phone that could have ended up as little more than a proof of concept prototype, but the high price and awkward, low-res screen mean it should remain little more than a curio for most.