I’m not alone in thinking that TT Games and its Lego series don’t always get the respect that either deserve. For all the talk about the games being formulaic, each maintains a tricky balance between staying true to what fans expect from the brand and bringing in enough new features to keep things exciting. With maybe the odd exception, TT Games has also kept the quality level high, each game bringing its own distinct feel to the Lego style, each game respecting the universe it plays in, and each, more often than not, improving on the last.

I think the series’ fans – and they’re out there – understand this. It’s why they go out and buy a Lego game two or even three times every year. These are great, feel-good games that just about anyone can get stuck into, and arguably the best family games to come from any developer that’s not Nintendo. 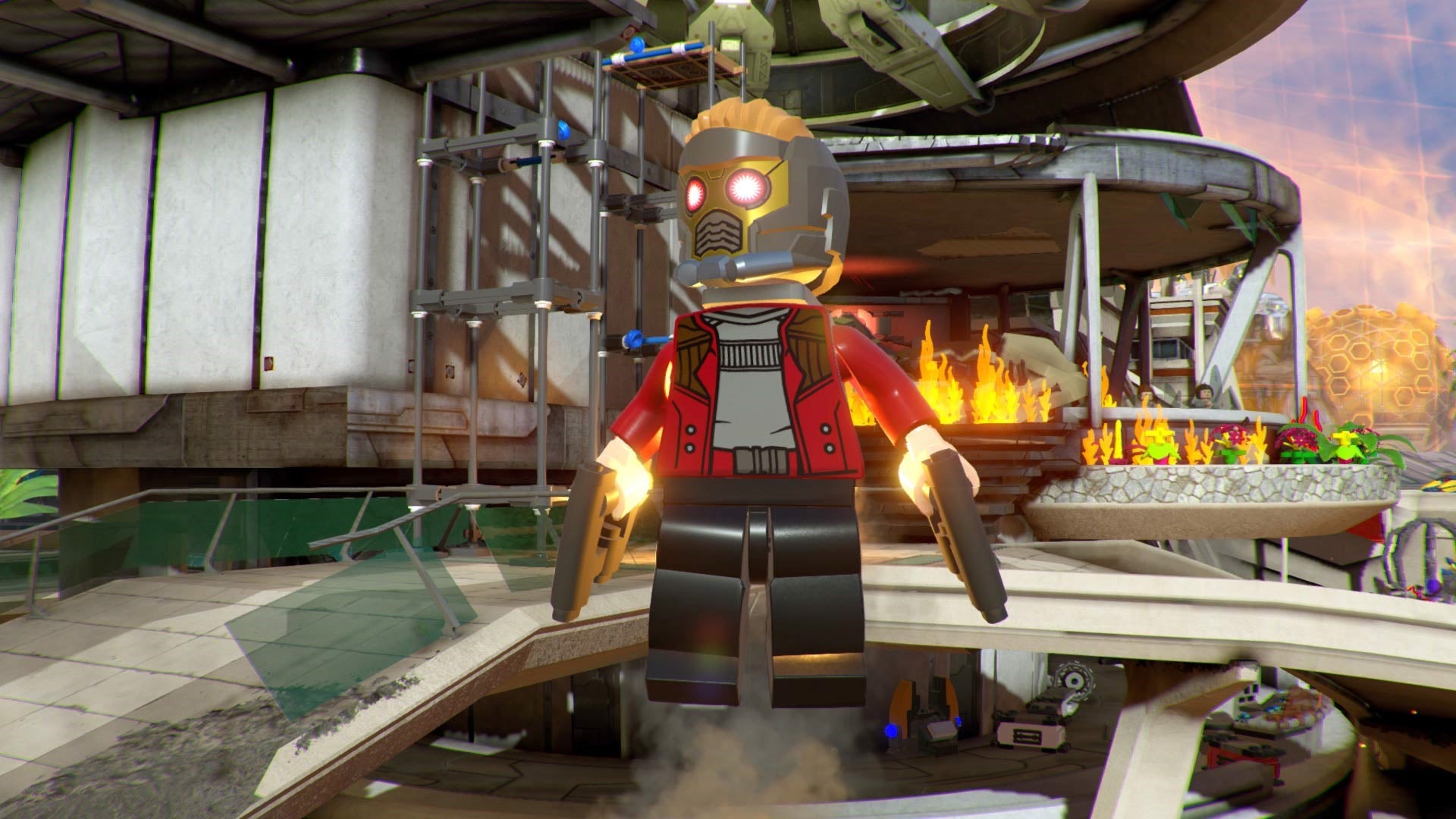 While there are references to the movies – specifically the Avengers and Guardians movies, plus Thor Ragnarok – this one’s obsessed with exploring the weird corners of the comic-book universe, including alternate realities like the 2099 and Noir settings, where you’ll find unusual, twisted versions of your favourite Marvel stars.

It’s a good sign when the main villain of the piece isn’t Loki, Thanos, Magneto or even Galactus, but Kang the Conquerer – a classic sixties Marvel villain whose hobbies include time travel and dominating worlds. And while you’ll spend a lot of the lengthy campaign playing a huge range of guest heroes, the teams focus in on combinations of the best-known heroes – Thor, Spidey, Captain America, Doctor Strange – with names that are currently outside the cinematic universe, including Ms. Marvel, Captain Marvel and She-Hulk. What’s more, the more obscure stars are arguably the most fun to play. 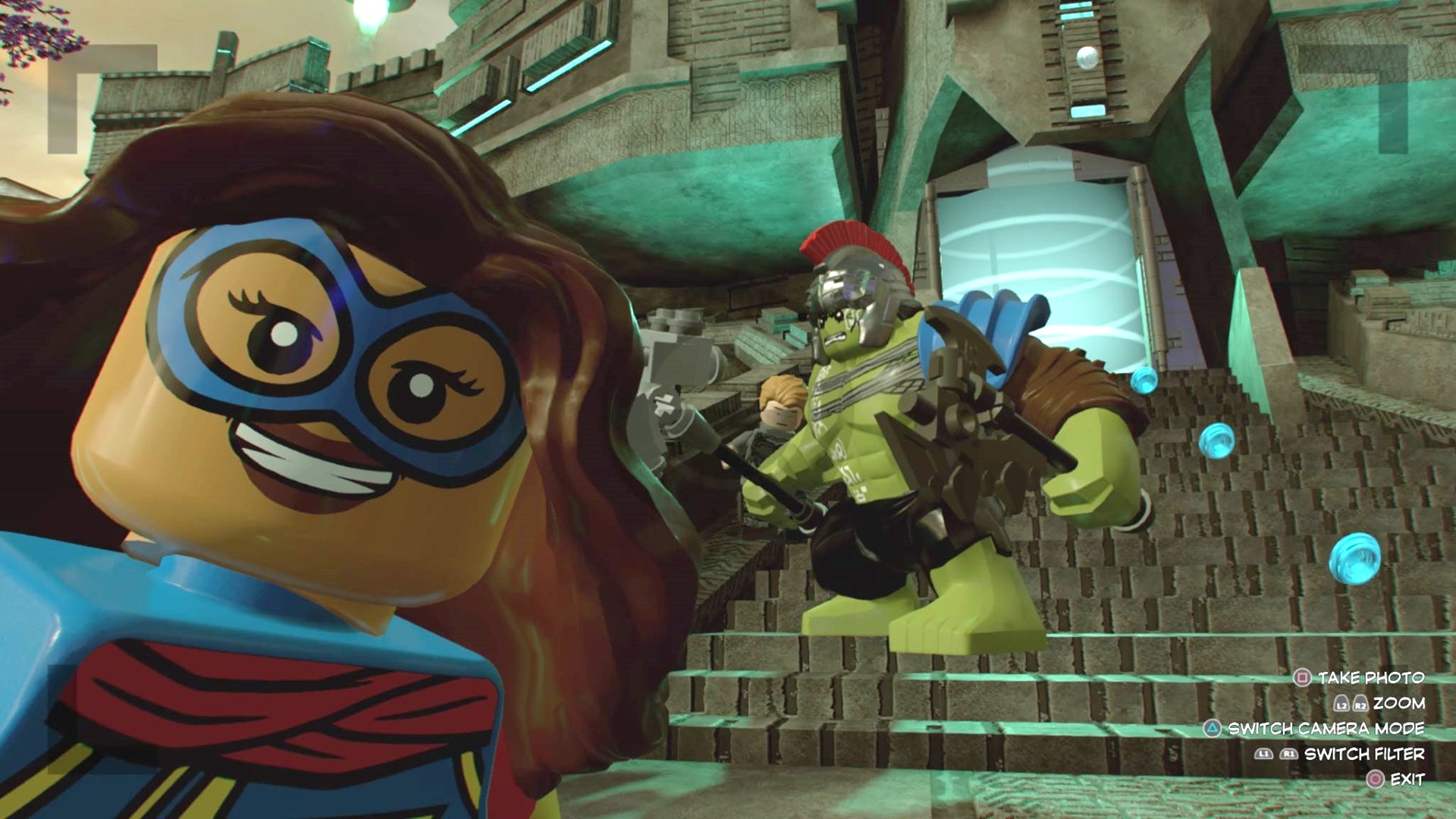 Kang provides a great hook for the proceedings too, arriving in Manhattan then rapidly stealing the borough to add it to Chronopolis – a city forged from Kang’s favourite chunks of the Marvel universe. The result isn’t just the most interesting and varied open world setting of any Lego game, but one where the action can switch from medieval castles to Asgard to the old west to a 1940s film noir Manhattan to the future to undersea kingdoms in a heartbeat, without anything feeling out of place.

Crucially, we also get the most interesting set of abilities of any Lego game. The fighting in Lego games is fun, but it’s often not that challenging or varied; one punch, smash or energy blast works pretty much like another. Here though, characters have very different movement styles, combat styles and special abilities. So that fighting as, say, Ms. Marvel, feels different from fighting as Thor or Spidey.

Some characters swing around on webs and fire their web-shooters, others rely on ranged attacks or close-quarters melee skills. Some, like Groot, Ms. Marvel and the Hulk, can change shape, becoming bigger and stronger or smaller and faster, even morphing with extendable limbs or rolling up into a ball. 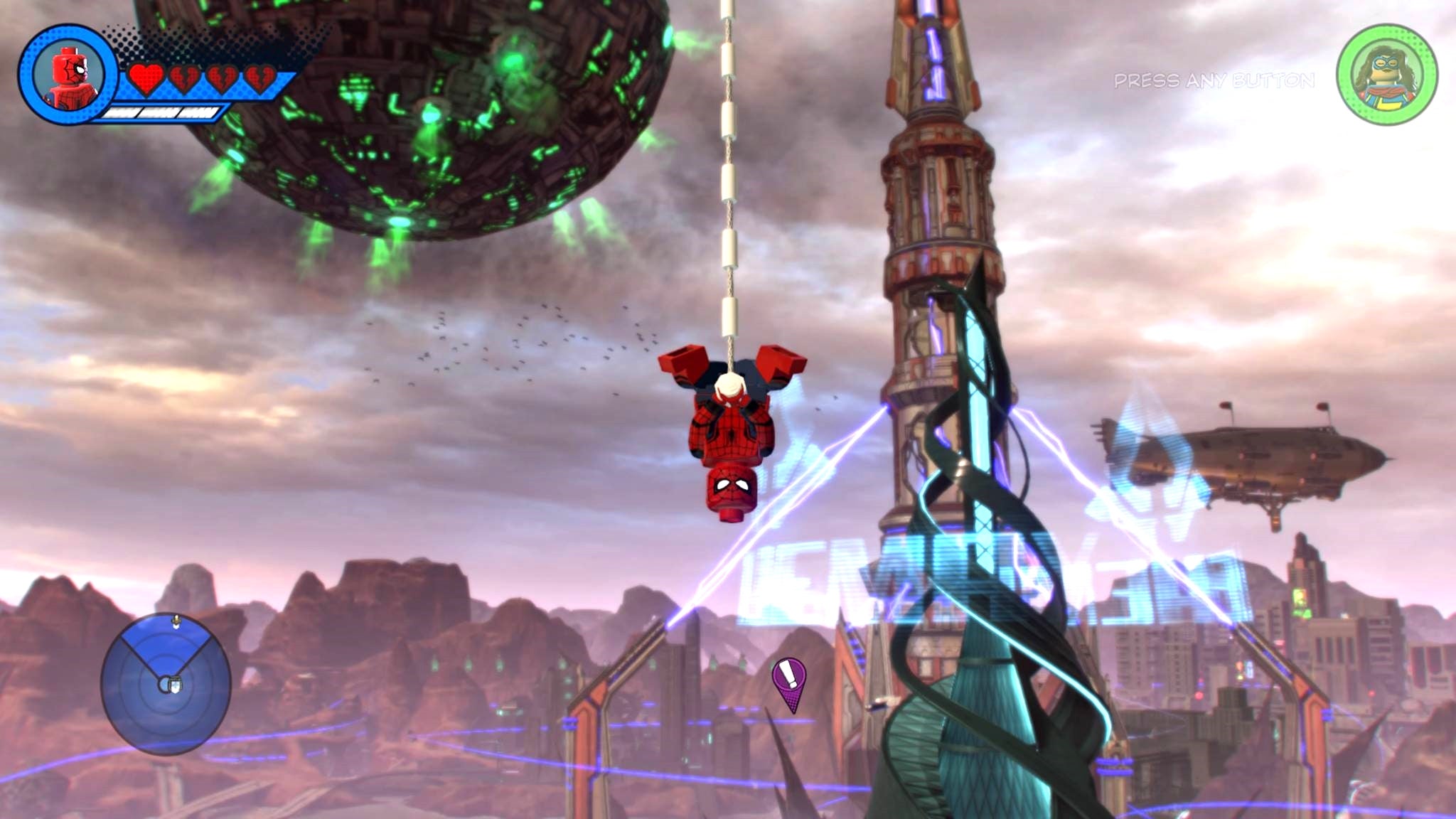 And these abilities make for some fantastic puzzles, where you’re working out which hero and which capability will allow you to get past that locked door, reveal that hidden rune or disrupt that boss villain’s attacks for long enough to strike a blow. Different materials respond to different powers or attacks, while Ms Marvel gets a starring role in puzzles that see her shrink and creep inside to activate electronic locks, calling in a cool, maze-rotating sub-game.

Each story mission, meanwhile, becomes a mini-epic of affectionately parodied superheroics, cramming in bust-ups with goons, spectacular boss battles, the odd chase or turret sequence and puzzle-solving. I can think of the odd sequence or boss battle where the action drags, but most of the time you’re busy enjoying what the game has just thrown at you and wondering where the hell it’s going to take you next. Space battles? Arena fights? A chase on a circus train? M.O.D.O.K. in a cowboy hat? Nothing seems out of the question.

This might even be TT Games’ slickest piece of work. You still can’t control the camera during missions, but bad angles are very few and far between. The music is consistently brilliant, and while you have to get used to characters without the voices you’re used to in the movies, the cast does a brilliant job, with a cracking turn from Peter Serafinowicz as Kang. And while the visuals don’t dazzle you in the way that a Call of Duty: World War II or Horizon: Zero Dawn might, these guys are taking the rendering of plastic bricks to another level, to the extent that you can really see the microscopic texture in the surface of each Lego body part or the fibres in the capes. At times, the play of light and reflection is actually quite stunning. 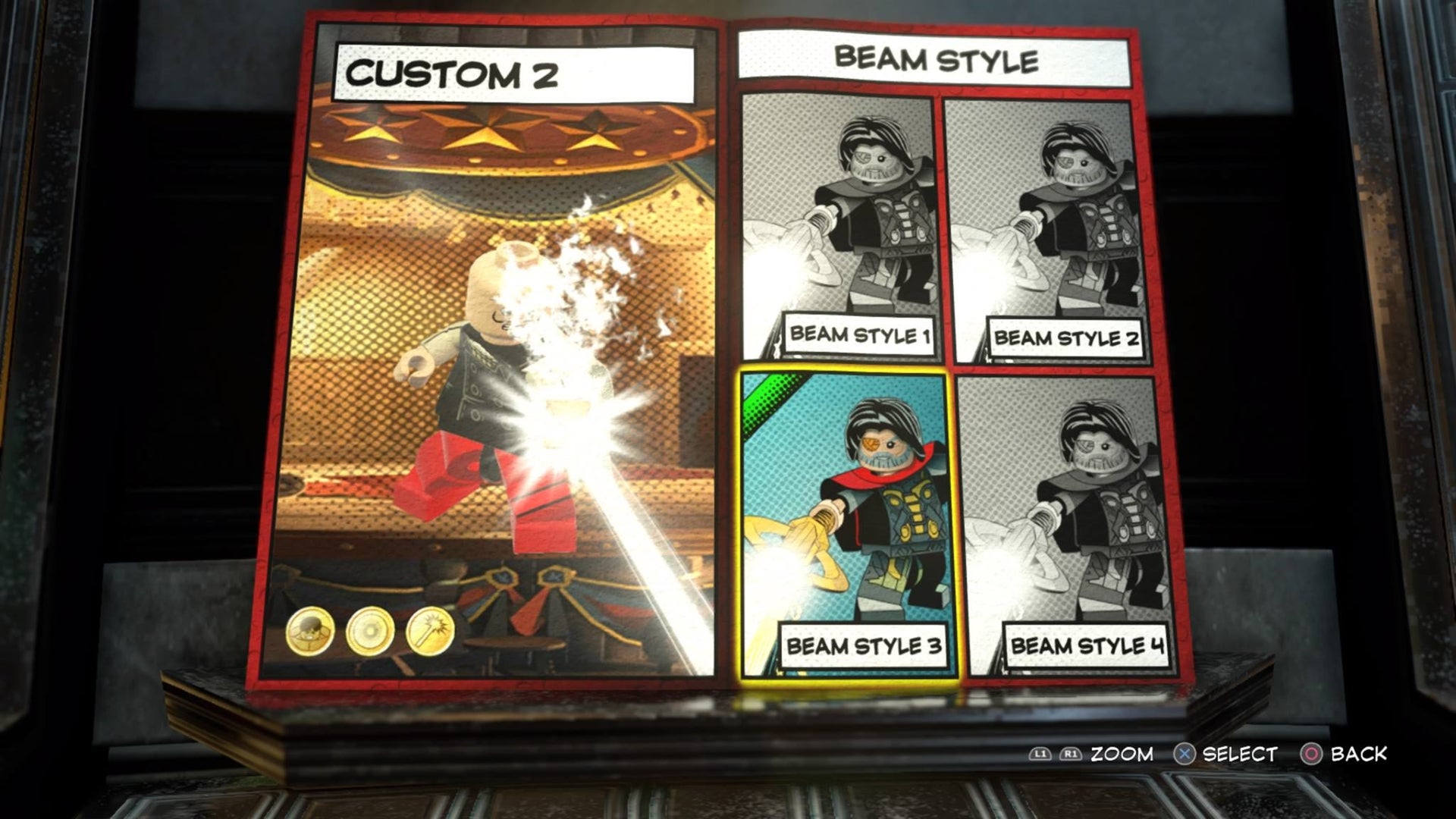 With this one, TT Games has gone the extra mile – and then a few more extra miles on top of that. There are over 230 characters to collect, and fielding some when you replay missions will – as usual – allow you to open hidden areas or grab previously inaccessible collectibles. The Chronopolis hub is crammed with things to do, whether relocating unhappy citizens, stopping crimes in action, taking part in racing challenges or helping stressed-up B-list heroes vent their anger on hapless villains. There are bonus missions, comic covers to collect and the age-old pleasures of trying to get a True Believer ranking on each level. This might be the deepest, richest Lego game of them all.

On top of that we get an impressively detailed character customisation tool, which goes beyond masks and costumes to cover individual powers, down to the shape and colour of an energy bolt and what kind of damage it will do, with different settings for when you tap the button and when you hold it. And while multiplayer means co-op for most Lego fans – and that’s still great here – TT Games has squeezed in two competitive modes on top. Up to four players can now battle for Infinity Stones in small arenas or fighting to see who can cover the most space with colour, like a weird cross between PowerStone and Splatoon.

In short, what we’re looking at here is a game that’s going to make a lot of different people very happy for a pretty decent length of time, and one of the finest family games of the year. Like Lego? Like Marvel? You know what you need to do.

It doesn’t move far away from that classic Lego formula, but Lego Marvel Super Heroes 2 is the series at its best; as accessible, fun and action-packed as ever, but absolutely crammed with Marvel goodness, exploring some of the strangest characters and settings in the legendary comic-books. There’s a richness and detail here beyond even previous Lego super hero games, so watch out if you have serious Lego fans at home: this one will keep you and them busy ‘til the new year comes, and probably for longer.