The parallels between the TT Games Lego series and the Marvel movie franchise are just too tempting to ignore. On the one hand we have a series that has been throwing out two or more games a year for a decade, yet doesn’t seem to be losing its momentum. Sure, we wouldn’t rate either Lego Batman 3 or Jurassic World as high points, but they still weren’t bad and Lego Dimensions was an absolute smasher.

On the other hand, we have a franchise that’s launched at least two movies every year for the last five years, and that seems every bit as unstoppable.

The worst you can say about both is that there’s a danger that they’re growing formulaic – that audiences might get tired of baddie-bashing, bricks and puzzles in games or superheroes, smart one-liners and bombastic, city-smashing climaxes at the cinema. If so, Lego Marvel’s Avengers won’t do anything to slow the downward slide but, boy, is it fun in the right here and now. 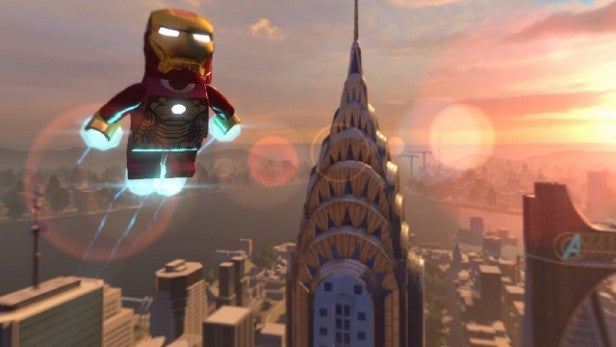 Where Lego Marvel Super Heroes gave us a whistlestop tour of the mighty Marvel comics universe, Lego Marvel’s Avengers narrows its focus on the cinematic universe – and more specifically on the films between Avengers Assemble and Avengers: Age of Ultron. In fact, these two films provide the backbone of the campaign, along with a flashback to Captain America: The First Avenger and chapters sampling Iron Man 3, Thor: The Dark World and Captain America: The Winter Soldier.

This obviously means a fairly limited line-up of Marvel heroes during the campaign – something which might upset those who loved the wider range of Lego Marvel Super Heroes – but it’s hard to complain when the chapters are so fantastic, mining the best and biggest sequences from the movies for every ounce of spectacle, while finding rich veins of comedy from the best-known scenes. If you or your kids have come to Marvel through the movies, you’ll love what TT Games has done. 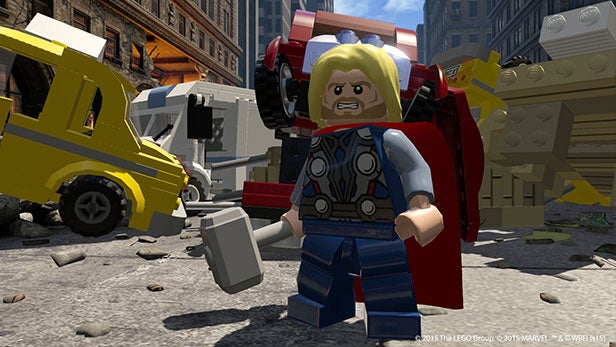 Don’t go in, though, expecting significant changes to the formula. The mix of combat and skills-based puzzle solving is as familiar and welcoming as a home-cooked Sunday lunch, and what changes there are could be labelled as refinements. There’s a great new buddy-combo mechanic while fighting that allows two Avengers to team up for an impressive special move, while a few puzzles rely on stacking two heroes. Both add to a game that’s best enjoyed played co-op rather than alone.

New arcade shoot’em up mini games crop up from time to time, while the classic Hulk v Hulkbuster battle is staged ingeniously from two vantage points, making it stand out from a game that’s a little too dependent on simplified, Quicktime Event-style boss battles. Meanwhile, Tony Stark gets a new mechanic for switching between different Iron Man suits. All in all, though, you’ve seen most of what’s here several times before. 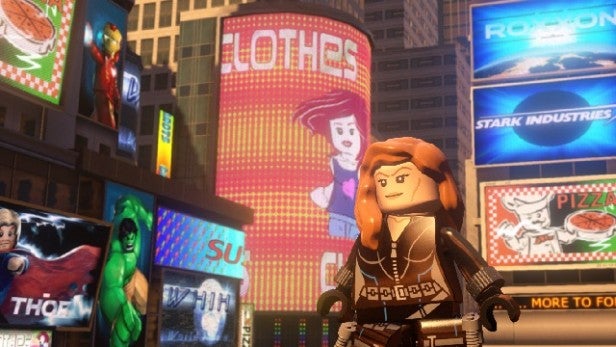 Early on this seems a serious weakness, but as the campaign unfolds you start to feel that this might just be the apogee of the current Lego formula. Each chapter is superbly paced, with you switching between groups of heroes so rapidly that boredom never gets a chance to creep in.

Where some recent Lego games have struggled to define identities and roles for their protagonists, with too many similar characters with similar skillsets, Lego Marvel’s Avengers does a great job of setting up Iron Man, Thor, Captain America, Black Widow, The Hulk, Hawkeye and Agents Hill and Coulson, then making each one fun to play.

The puzzles are well-staged, too; smart enough to be challenging, but not so tough that you’ll need to grab an FAQ. Much like the movie Age of Ultron, it could have done with a few minutes less of The Avengers battling endless waves of Ultron, but even here the rhythm of battling, building and solving holds your interest.

Tying in to the cinematic universe also benefits the visuals. The plastic minifigures and backgrounds have never looked better, but there’s a new confidence at work, restaging some of the biggest action scenes in perfect style, echoing the showy, sweeping camera movements and slow-mo pay-off shots. The fact that Lego Marvel’s Avengers pulls this off while making room for a stream of silly sight gags just makes it all the easier to love. 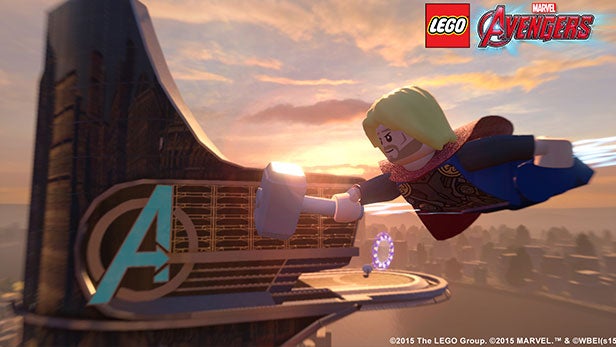 This might be TT Game’s funniest Lego game in ages. Not only do those sight gags come thick and fast, transforming some of the darkest moments from the movies into cheap, knockabout laughs, but dialogue pulled direct from the movies – there’s an awful lot of it – gets mashed up with Lego imagery that always finds some nutty or surreal new twist.

Some of the dialogue doesn’t quite work in with new dialogue recorded especially for the game, thanks to weird shifts of tone and volume, but that’s something we can live with. Meanwhile, fans of pigs in Lego games are especially well catered for, while Stan Lee himself gets roped in as a recurring comic stooge. Frankly, watching Tony Stark shoved, squeezed and dragged into a succession of Iron Man suits is worth the asking price alone.

For my money, this is the best campaign in a Lego game since the dynamic duo of Lego Batman 2 and Lego Marvel Super Heroes. And when it’s over you’ll still have only completed a fraction of the objectives and unlocked a relatively small number of the characters.

This is where Lego Marvel’s The Avengers, like Lego Batman 2 and Lego Marvel Super Heroes before it, really gains its long term depth. Needless to say, you can revisit completed chapters with new heroes and villains, opening new areas or tracking down those sneaky optional objectives, but the game also gives you a lot of open world to explore. 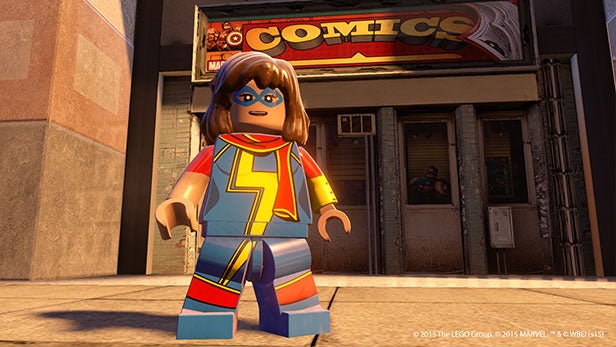 In fact, where the earlier games gave you one large urban setting – Gotham or Manhattan – Lego Marvel’s Avengers gives you Manhattan plus a bunch of other, smaller open worlds. Climb inside the Avenger’s Twinjet and you can make it to Hawkeye’s rural hangout, Ulysses Klaue’s abandoned shipyard, the S.H.I.E.L.D helicarrier or Asgard and solve more puzzles and track down more goodies there.

It’s also here that the game’s universe expands, taking in small-screen Marvel heroes like Daredevil, Luke Cage and Jessica Jones, plus a more expansive range of lesser-known Marvel stars. You won’t find Spider-Man or the X-Men – and not all of us get excited about umpteen Iron Man and Captain America variations – but if you like the sound of Moon Knight, Captain Britain, Black Goliath and Wendigo, you won’t go away short-changed. What’s more, new characters and missions are on their way through either free or inexpensive DLC.

Verdict
Lego Marvel’s Avengers a fine game played solo, but it’s a fantastic family game, short on frustration, big on laughs and packed with stuff to think about, find and collect. Serious Marvel True Believers might miss the more varied roster and exotic locations of Lego Marvel Super Heroes, but the new game has it beaten for action, spectacle and humour. Throw in a cracking set of free-roaming locations to explore, and you have another storming superhero hit.