Nintendo Switch games have tended to come in two forms. Either we get a ‘definitive’ version of a Wii U title, with all the upgrades and new features to take advantage of the latest hardware. Or we get fully fledged sequels and brand-new IPs. Both methods have worked a treat, with Nintendo titles like Mario Kart 8 Deluxe and ARMS being absolute hits.

Splatoon 2 is another great Nintendo Switch game, but its biggest problem is it tries to straddle both lanes, and in doing so doesn’t feel like a full sequel nor a ‘deluxe’ edition of its predecessor. However, Salmon Run and the new single-player story will be enough for Splat vets to consider this another Switch must-buy.

While the huge pink ‘2’ might have you thinking this is a fully fledged sequel, there’s an awful lot that carries over from the original game. The main hub area is near enough identical, barring graphical upgrades. There are 10 multiplayer maps at present, but some of these are also from the original game. There are new weapons, but in terms of basic mechanics, a lot remains the same. 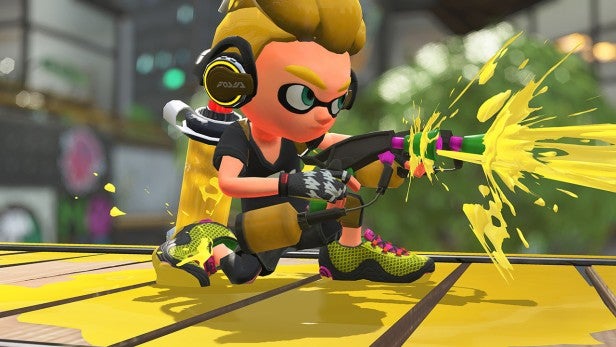 There wasn’t an awful lot wrong with the original Splatoon, and if it ain’t broke, don’t fix it. But the fact that this has been pitched as a sequel means there can be a feeling of being left short-changed. Had this been a ‘Splatoon Ultimate Ink-dition’, then it’d get the same treatment as Mario Kart 8 Deluxe. It isn’t until you dive into the game’s modes that you realise there’s more than meets the eye.

However, some of the mechanics which carry over from the Wii U feel at odds with the Switch’s convenience as a console. For example, the game forces you to watch news bulletins from Pearl and Marina (two Inkling DJs), telling you which stages are in rotation every single time you start the game. Another is being unable to jump out of a matchmaking lobby once it starts, so if it seems to be taking a while to find a match, your only option is to quit Splatoon 2 entirely and reload it, meaning you’re forced to sit through Marina and Pearl’s diatribe once again.

Also, stage rotation now occurs more frequently in online play, up to every two hours from four. But if you’re in a matchmaking lobby during the switch, be prepared to be booted and have to start finding a game from scratch.

Considering the Switch’s hook as a console that can be played whenever you have a spare moment, having to drudge through menus and be forced to sit in lobbies is incredibly annoying. I don’t care which maps are in rotation if the game starves me of what little time I have to play them.

There’s no getting around the fact that Splatoon 2 still remains an excellent shooter, especially for fans who no longer have time to compete with the 12-year-old Call of Duty fanatics of this world. 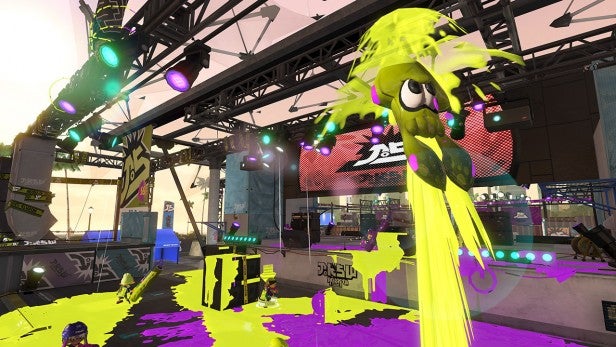 The new single-player mode is a great addition, fitting somewhere between an extensive tutorial and a delightful experience in its own right, with some truly superb level design.

Set two years after Splatoon’s Hero Mode, the game has players rescuing Zapfishes once again, but also saving Callie, one half of the Squid Sisters pop group. Split into five main areas, each with multiple levels and a boss, I didn’t expect it to be as fun as it was. The bosses in particular are some of the most creative and entertaining I’ve experienced in a shooter.

Each level has its own unique hook which keeps the entire campaign interesting. From running across moving platforms to hitting switches, to shooting sponges to soak up your ink and rapidly expand in size, allowing you to reach new areas. There are also two collectibles hidden in every level, one of which can be spent upgrading weapons and grenades while the other provides lore-expanding pages. They are a bit throwaway – the weapons are pretty capable in story mode even at base level, and the lore of Splatoon isn’t exactly The Lord of the Rings – but I enjoyed taking the time in each level to dig around for them regardless. Plus the story mode presents the perfect opportunity to experiment with Splatoon 2’s new arsenal, which is a real highlight.

As well as the weapons from its predecessor, we now have a bunch of excellent new toys that get really creative with different ways to paint the town in ink. First are the Splat Duelies – my personal favourite – which are dual-wielded pistols that also allow the player to dodge with the jump button, before popping back up and rapid firing an unprepared enemy with one of the guns.

There’s also an umbrella, which initially shoots out a blast of ink like a shotgun, but holding down ZR will open up the brolly to be used as a shield. Keep the button pressed and eventually it’ll fire away like a rocket. There’s also a gatling gun and a rocket launcher, but the best is probably the “Slosher”, literally a bucket of ink which you can throw over a wide spread area to deal decent splash damage.

Each weapon feels a viable choice, with its own strengths and weaknesses, but none currently feeling at an inherent disadvantage.

What compliments the weaponry is the more reserved pace of matches. While other shooters dare you to blink and miss all of the action, the movement speed of Splatoon is positively glacial by comparison – but that’s a good thing. With the focus on coating the floor in your team’s colour rather than wiping out the opposing team, this more considered speed serves to a great benefit of the experience. It’s immediately rewarding and satisfying, swapping the intense focus on K/D ratios for the job of an interior decorator gone mad. 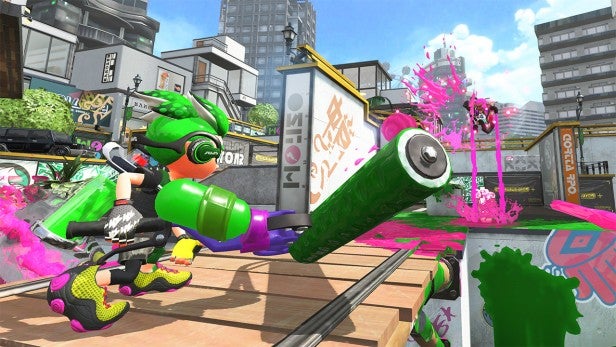 Matchmaking, at least on launch day, has been very easy. Turf War games have come thick and fast and the action has been excellent. It’s a shame that Salmon Run can only be played locally, or at set dates and times in online multiplayer decided by Nintendo (much like the Splatfest, perhaps as a means of guaranteeing lobbies are full). Salmon Run is a cool horde mode that adds a nice layer of co-op to Splatoon 2’s multiplayer offering, too.

The lack of a map means communication is essential between teammates, unless you rely on following the trail of green ink left by the Salmonids. Thankfully you can communicate with the press of a button on the Switch, rather than rely on Nintendo’s convoluted attempt at voice chat on the console. Also, I hate multiplayer chat at the best of times, so button commands are always preferable.

It offers a surprising amount of challenge, too. If you find a player or two randomly dropping out of a match, prepare for the Salmonids to overwhelm you and for your quick demise to follow. This is where I imagine many veteran Splat players will spend much of their time. The fact that there’s a limited number of rounds means you don’t have to worry about matches lasting hours, too.

It may feel a lot like it did before, but Splatoon 2 remains unlike any other shooter on the market. The focus is on fun rather than intense competition. It isn’t until the very end of matches I even consider how many opponents I’ve splatted; I’m too busy covering the map in ink. Having a fun single-player mode and brand-new co-op horde mode in the form of Salmon Run has only served to make this a more well-rounded package.

Consider Splatoon 2 the definitive version of the original game and this is an excellent proposition. Its multiplayer action is still some of the best and most creative around, and for fans who plowed plenty of hours into the original game, there’s still plenty of fun to be had.