Is this the best Lego effort yet? It’s certainly close, True
Believer. Lego Marvel Super Heroes takes all that is good about the Lego games
and mixes it with a whole lot of Marvel magic to make what will be the
definitive Christmas hit for many younger gamers, not to mention many
comic-book geeks. The worst thing you can say about it is that it reworks many
of the ideas we saw introduced in last year’s Lego Batman 2. It reworks
them but extends them, and it makes for an even better game. 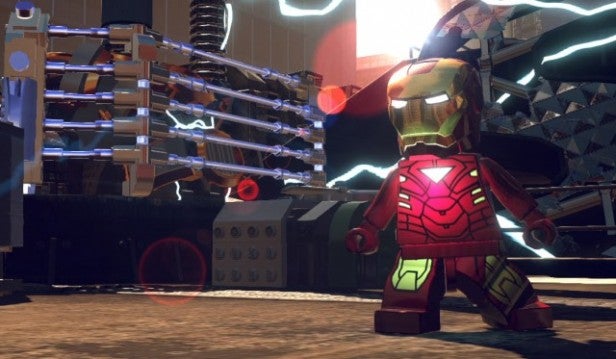 Wondering what games to buy this Christmas? Here’s our round-up of the best games of 2013

Let’s not go too deep into the storyline, which sees Doctor
Doom working with Loki and some of the world’s most evil super villains to
build a fiendish super-weapon out of all-powerful cosmic bricks. It’s really
just an excuse to fit as many Marvel heroes and villains as possible into one
vaguely coherent storyline. In terms of the style and production design, it’s
tied into the ‘Phase One’ Marvel movies, leading up to and beyond Avengers
Assemble, but not restricted to them. Beyond Iron Man, Thor, Hulk, Captain
America, Black Widow and Hawkeye it still manages to cram in Spider-Man, the
X-Men, The Fantastic Four and a range of other big-names, though with looks
more indebted to the comic books than the movies. It’s a bit of a mash-up, but
it all works surprisingly well.

Like Lego Batman 2, it’s a game with two distinct parts. In
the first, you tackle a series of missions against the forces of Doctor Doom
and Loki, foiling a prison break, defeating The Red Skull, chasing Loki and the
Tesseract in Asgard…, that sort of thing. In the second you’re free to roam
around a Lego-fied Manhattan, taking part in shorter, ad-hoc missions, grabbing
collectibles and unlocking new characters. 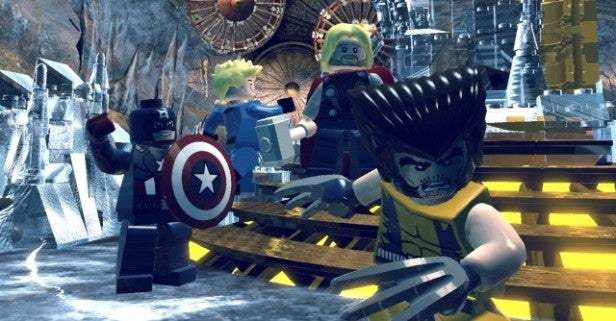 The missions won’t pose too many surprises for fans of Lego
games. This is a series that has long believed in iteration, and in the sparing
addition of new elements to the formula, and Lego Marvel Super Heroes isn’t
about to break the mould. Each section is really just a series of puzzles
solved by applying the right hero with the right power at the right time,
broken up by the occasional scrap with henchmen and culminating in a
larger-scale boss battle. This latest Lego instalment is no different from the
last, or the Lego that came before that, and you’ll be excused for feeling just
a little déjà vu creeping in. Luckily, Lego Marvel Super Heroes does just
enough new to keep things fresh, and does it with a bit more character – and
a few more characters.

Lego Batman 2 was a bit stingy with its cast of Lego heroes,
holding back the heroes of the Justice League until the end of the game. Even
then, you got the sense that the game wasn’t making the most of its heroes’
superpowers, or even differentiating all that much between them. Lego Marvel
Super Heroes doesn’t make the same mistake. Within the first few levels you’ll
find yourself flitting between Spider-Man, Hulk, Captain America, Mr Fantastic,
Hawkeye, Black Widow, Wolverine, Thor and The Human Torch, and that’s before it
brings in some more obscure heroes and the rest of the X Men. What’s more,
while heroes might have certain capabilities in common, they vary hugely in
their movements, their attacks and their different animations. 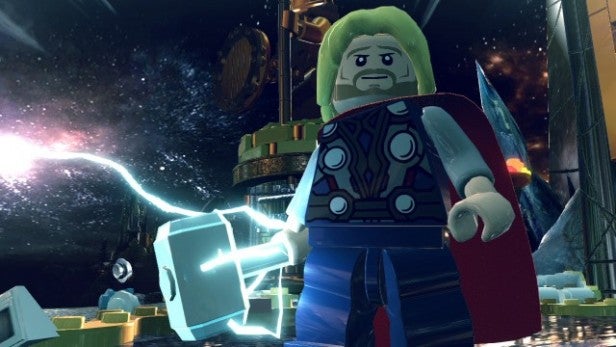 This last point makes a huge difference. The Hulk is huge
and shrugs off attacks from lesser Lego figures, but what makes him The Hulk is
his loping movement, his momentum, the way he can grab and throw huge objects
or wave puny humans around like ragdolls. Captain America can use his mighty
shield to flick switches and deflect laser beams, but it also plays an
essential part in his everyday combat animations. Ever Marvel character, from
Spider-Man to Wolverine, seems to have their own combat moves and finishers,
and a huge amount of work and detail has gone in, whether it’s the stream of
unusual arrows Hawkeye seems to find in his quiver, or The Human Torch’s
fantastic spiralling flame punch. While it’s good to see so many heroes
flying, some who can’t still get their own methods of locomotion, like Spidey’s
web-slinging, wall-crawling and backwards hop onto the wall.

It’s funny too. While Lego Marvel Super Heroes can’t rely
entirely on the movies for material – though it pulls in voicework from Clark ‘Agent
Coulson’ Gregg – it still has fun riffing on the established characters, with
superb send-ups of Thor’s pompous mock-Norse pronouncements, Tony Stark’s party
lifestyle and Wolverine’s iconic hair. The villains have their moments, too,
with a fine impression of Tom Hiddleston’s Loki and some great sight gags for the
Red Skill, the Abomination and Magneto.

The story will take you a decent while to get through, as
the action moves you from New York to Asgard, Professor Xavier’s mansion and
beyond. When it’s done the game isn’t even halfway over. You can actually
explore the open world New York at any time, borrowing vehicles (their drivers
won’t mind), taking part in checkpoint races and running side missions, which
might see you helping ex-circus performers, catching monkeys or dispatching
frost giants at the docks. These are brilliant, but it’s all a whole lot easier
if you leave them until you have most of the story missions under your belt,
not least because you’ll need specific heroes/villains and powers to complete
many of the tasks. You can call in unlocked vehicles and change characters at
S.H.I.E.L.D. drop-off points, and there are hundreds of characters to collect.
Whether you’ve spent your life devouring encyclopaedias of the Marvel universe
or you have a casual acquaintance with the movies, discovering everything there
is to discover is one of this year’s great gaming joys.

Despite regular guest appearances from a frequently
imperilled Stan Lee, It’s not 100% excelsior. Old Lego issues like poor camera
angles, stuck characters and difficulties seeing crucial objects while playing
in co-op split-screen re-emerge. TT Games has done its best to refine the
flying controls, but flying accurately around the city is still a struggle. The
open world is big, nicely populated and full of things to see and do, with
missions that are more than mere collect-a-thons, but the game doesn’t do a
great job of explaining how it all works or what you’re meant to be doing, so
expect some confusion when you first get stuck-in. Though Lego Marvel Super
Heroes has better navigation systems than Lego Batman 2, it’s still very easy
to get lost, or for two heroes playing co-op to lose each other.

These are issues we can live with. Lego Marvel Super Heroes
is ridiculously good fun, and the sort of game that can keep a whole family
busy in the run-up to Christmas and well beyond. One day that mighty Lego
formula might stop working, and even the magic of Marvel won’t help then, but
right now this is a combination as all powerful as Galactus, as witty as a
Spidey quip and as smart as Professor X. It might just be Lego’s best game yet.

The magic of Lego and the might of Marvel meet in the most powerful Lego
vehicle yet. The open world framework has never been so detailed or so
fully-realised, and while the missions don’t do much to move beyond the
standard formula, a huge cast of heroes and villains keeps things fresh and
thrilling. A few issues – including some old ones – still need fixing, but if
you’re looking for the essential family game for the holiday season, you’ve
just found it right here.

More: Xbox One vs PS4