It doesn’t reinvent the series, so if you can’t stand heavily scripted missions and being hustled and funnelled from one action sequence to the next, then go elsewhere. It does, however, reinvigorate it. I can’t remember the last time that a Call of Duty felt this exciting.

The secret, I think, is Sledgehammer’s commitment to going back to Call of Duty’s core. This doesn’t mean that it strives for realism or that it cuts back on preposterous action sequences, as this remains a Hollywood vision of WWII – there are set-pieces Michael Bay might have considered a bit much. Yet CoD World War II puts gritty, fast-paced combat at the heart of everything, while trying to give you the strongest feeling yet that you’re part of a platoon being tested to its limits. Sure it can be dumb, gung-ho and prone to uncomfortable shifts of tone, but it can also be powerful, emotive and thrilling.

This isn’t just about the presentation, incredible as that presentation is. This is easily the best-looking and most visceral CoD ever made, and while you’ve seen many of these battlefields before, you’ve never seen them quite like this. Ravaged buildings, rain-drenched forests and the beaches and trenches of Normandy have never looked so grim or realistic.  For all the talk of ‘boots on the ground’ it’s more a case of boots in the mud or tramping through the snow. No CoD before has had environments that look and feel so grounded in real-world locations. 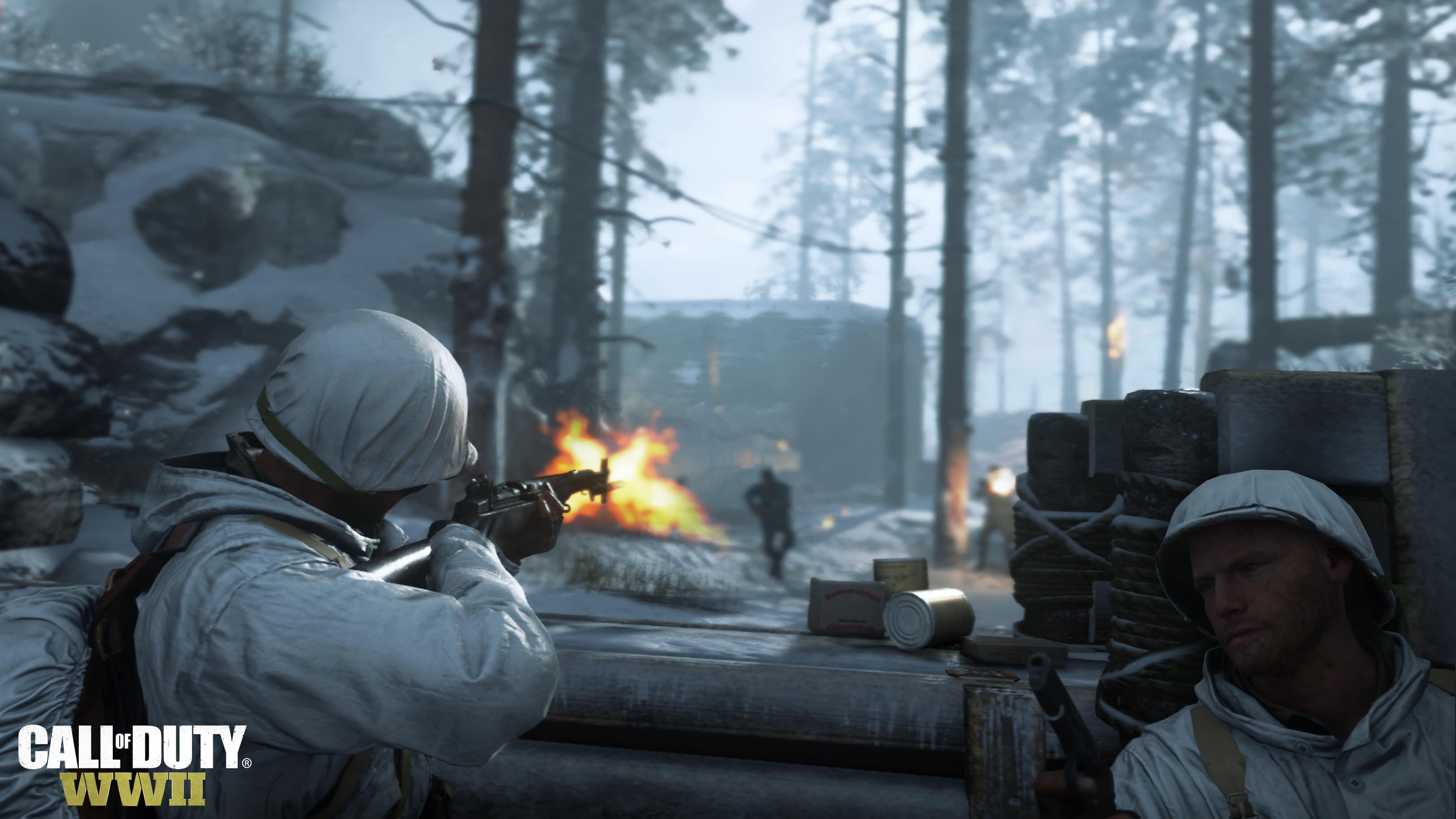 But this isn’t about photorealism, but about a strong cinematic approach. The use of fog, smoke and rain is both film-like and disorienting, with fantastically atmospheric use of blur, particle effects and lighting. The skirmishes are bigger, the missions more intense and the action sometimes nerve-wracking. There’s an icy sequence before The Battle of the Bulge where, as in the Band of Brothers TV series, you could swear you felt the cold. Playing on Xbox One X, I was frequently left gobsmacked by the sheer sound and fury of the whole experience.

Yet it’s not just the scale that makes this one work so well, but the thinking that has gone into the fundamental mechanics. I can’t stress enough, for example, how crucial the dropping of the CoD2 health recharge for old-school health packs is. You only have a limited number, though you can restock on the battlefield, and each one takes a few seconds to apply. As a result, you use them carefully, ducking behind cover and applying them when there’s a pause in the action, always weighing up whether your injuries are bad enough to require treating now, or whether you can risk holding off just a little longer.

The effect isn’t necessarily a tougher Call of Duty game, but it’s the first in years where I haven’t felt like an action movie superhero, but like a grunt who can and will get killed. You tend to play World War II with a little more care and caution that the last few versions, and when you do something heroic, there’s a sense that you’re actually risking something. Is the AI smart? Not really, though some manoeuvres will surprise you, but the scripting and pacing gives you some tough situations and enough narrow scrapes to keep your pulse rate up. I wouldn’t say that World War II is unpredictable, but it’s great at making the predictable exciting.

What’s more, you’re no longer like a kid in a sweetshop, choosing from a selection of cool powers, grenades and super-guns, but a soldier forced to improvise on the battlefield, grabbing what you can and using what you must just to hit that next objective. There are some superb weapons on offer, from sniper rifles to SMGs, silenced pistols and flamethrowers, but you tend to think about how you use them and which one’s right for the situation now. 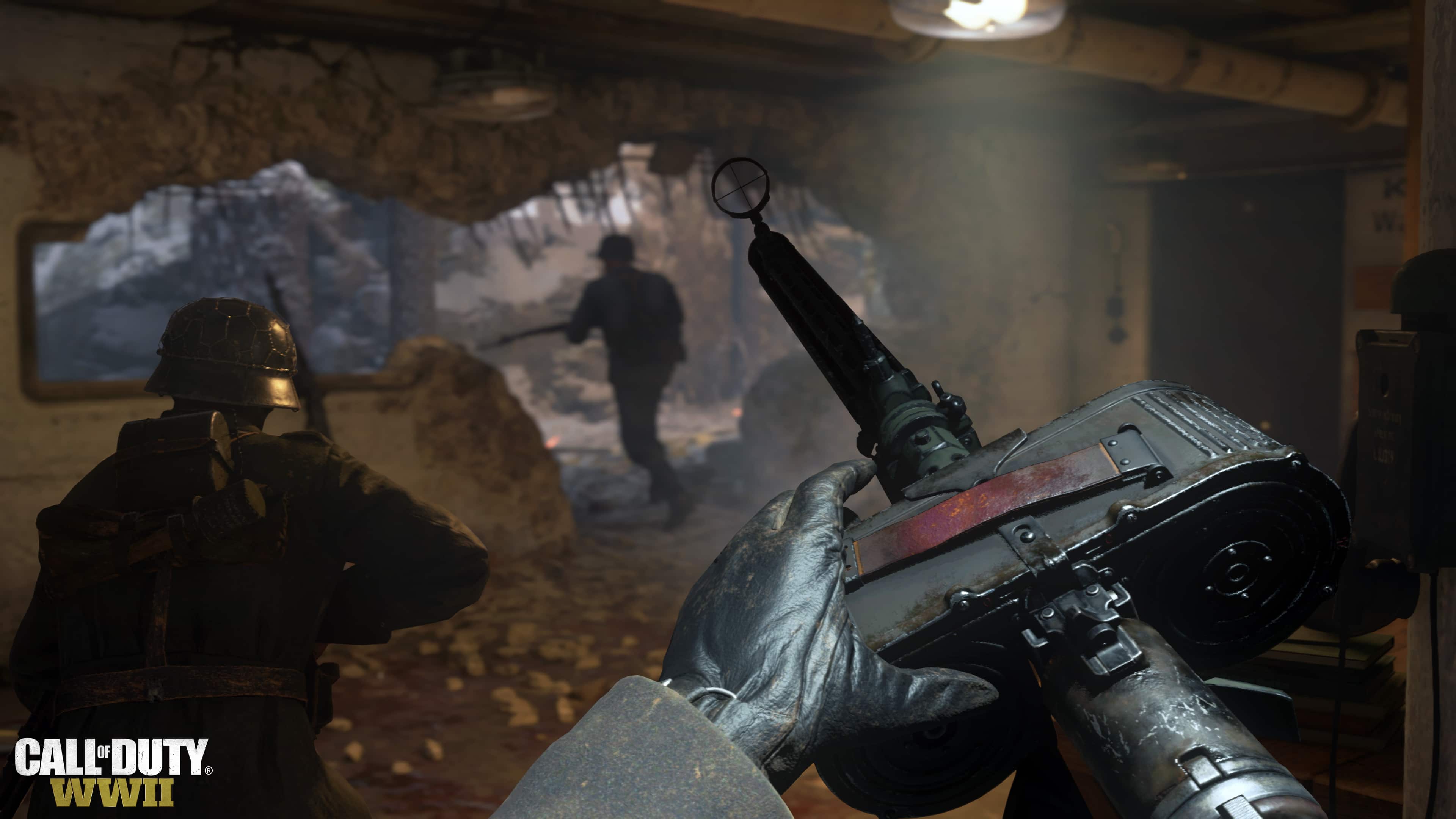 While you can resupply kit and ammo through your squad mates – one does health-packs, one does ammo, one does grenades and others can help you call an airstrike or lend you their binoculars – you have to recharge these abilities and keep up with them in the fight; another little touch that keeps you invested as a team-player, not a lone wolf.

The biggest complaint you might have about the campaign is that there’s little that you haven’t seen before in the early WWII Call of Duties, and not a whole lot you won’t have done before. Yet ten years and today’s graphics hardware makes an enormous difference, and suddenly stopping a tank, storming a hill, ambushing a convoy or taking the Remargen bridge no longer seems like a tired cliché. The few vehicle and turret sequences – including a fabulous air battle – move quickly and don’t drag down the action. In fact, they give you a wider vision of the war in progress.

What’s more, World War II isn’t short of surprising moments. Its most bombastic, James Bond sequence is followed by one of the most subtle and interesting espionage sections in the series – though the usual, relentless push from objective to objective removes a little of the tension. It’s a game that can morph from all-out war movie to spy movie to Inglorious Basterds and back again within the course of a couple of missions. There’s suspense, drama, loss and payback, and while there’s a certain amount of cheese, it works more often than you think it should.

All in all, then, a great campaign, but World War II has a lot to offer even once you’ve blasted your way through ten hours’ worth of Nazis. For a start the multiplayer also benefits from the return to roots approach. 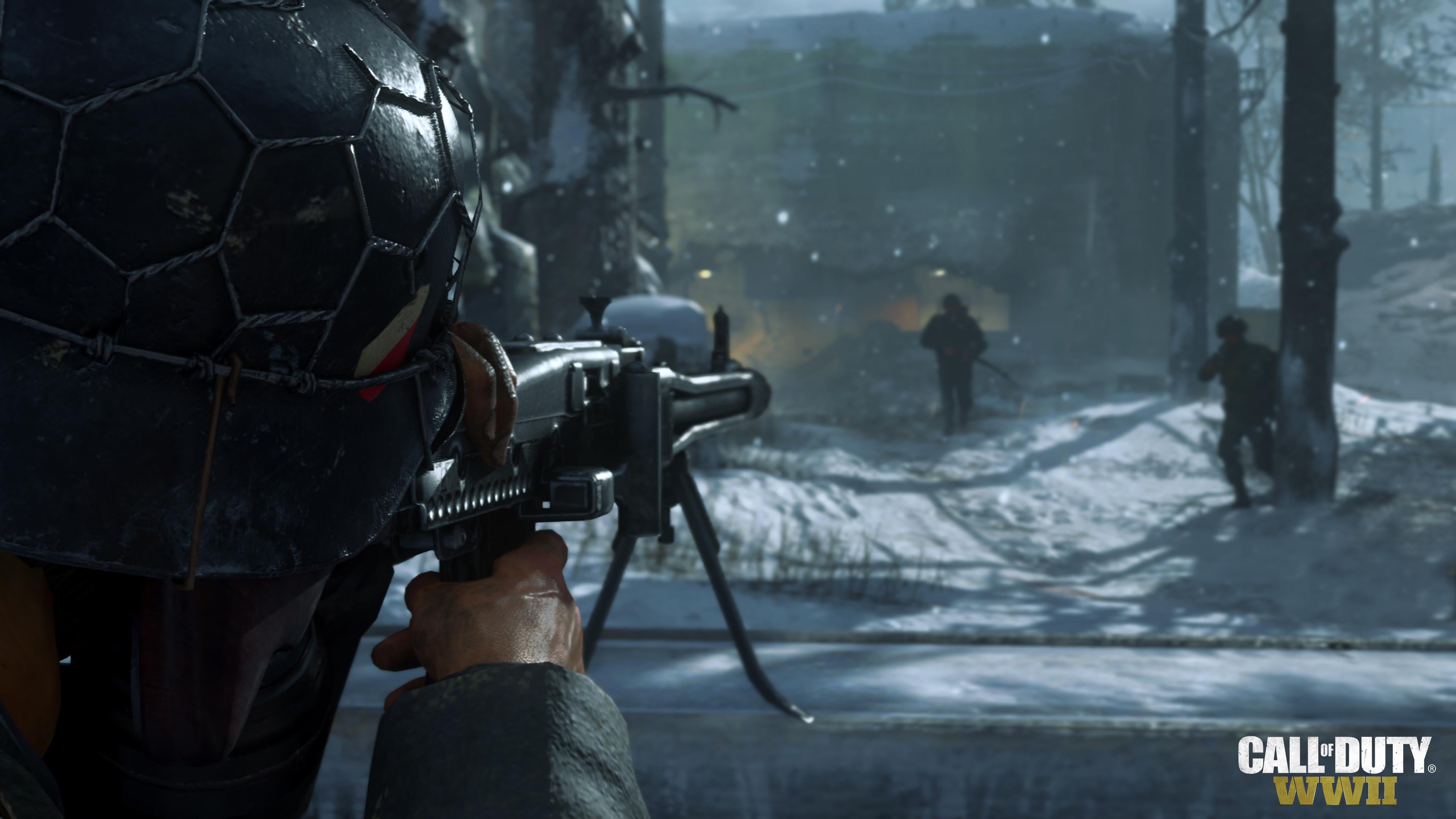 Surprisingly, the straight deathmatch and domination modes don’t necessarily showcase World War II’s multiplayer at its best. The classic feel of CoD2 to World at War is back, and the combat is as frantic and hair-trigger twitchy as ever, but the maps either feel a little too wide-open and sniper-friendly or a little too claustrophobic, pushing endless insta-kills. Kill Confirmed plays well enough to keep me coming back, partly because the rush for dog tags to secure the points keeps people moving, but it feels like good old-school CoD rather than anything forward-looking. I’m also still concerned that the way progress works, giving more perks in the hands of the best, most committed players, makes it hard for those of us who are, well, less skilled to jump onboard.

Switch to the War mode, however, and World War II multiplayer is something I could fall for in a big way. This is a revamped version of the classic mode from World at War and CoD3, where the match runs through several stages, each team trying to achieve or block objectives, and it has a sort of epic feel and flow that CoD multiplayer has never quite achieved before.

There’s something about defending a manor house from attacking forces, blocking up the windows to hold them at bay, that makes everyone focus and pull together. Rushing to prevent tanks advancing or reinforce troops defending a bridge makes you feel part of a team. When you pull off a last-minute reversal or hold the enemy off for long enough for a reprieve, there’s a real sense of achievement. CoD multiplayer has always felt fantastic, in its short, vicious cycles of tension, violence, triumph and defeat, but it hasn’t always created great stories in the way that Battlefield’s larger-scale combat tends to do. When War mode hits the right spots, now it can.

There’s a lot of stuff to get your head around, not least a sizable multiplayer hub set on the Normandy beachhead and a slightly over-complex and ungainly class and progression system. But if you found Infinite Warfare’s multiplayer disappointing and Black Ops 3’s multiplayer too gimmick-driven, World War II’s is tighter and more focused. It’s not trying to be Battlefield or Overwatch; just the best Call of Duty it can be.

And finally, there’s Nazi Zombies mode. Again, Zombies Mode has grown in scale and complexity over recent versions, but bringing Raven onboard to handle this year’s model might be something of a masterstroke. Obviously, Wolfenstein doesn’t need a spiritual successor now the revamped series is going from strength to strength, but Nazi Zombies has that old-school iD/Raven feel, bringing to the horde mode the kind of no-nonsense blasting and creepy Nazi science-meets-superstition horror that the old Wolfenstein games used to have. Think great zombie monsters, multi-layered, maze-like levels and even a little Resident Evil influence creeping in. More scares, more shooting, less window dressing; this is what Zombies should be about it.

I haven’t always been a huge Zombies fan, but this I like a lot. It’s fast-paced, accessible, slightly tongue-in-cheek and a whole lot of fun, with guest appearances from Ving Rhames, Udo Kier, Vikings’ Katheryn Winnick and David Tennant, and while – like any wave-based game – it grows repetitive, I think it has the strength and variety to keep you coming back until the next expansion hits. 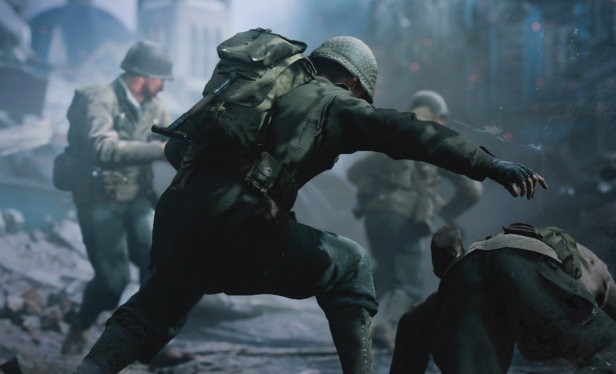 Each recent Call of Duty has been a mixed package, with a good campaign let down by dubious multiplayer, or great multiplayer buoying up a dull campaign. World War II is the first CoD in years that doesn’t need to apologise about anything. The jewel in its crown is a fantastic single-player campaign that gives you the big set-pieces and heavily scripted action sequences you might take for granted, but with a scale and a vigour that you haven’t seen in years. And while the handling isn’t always deep or subtle, you get some smaller, more surprising moments where Sledgehammer reaches for something more.

We might never see a CoD as groundbreaking or benchmark-setting as CoD2 or Modern Warfare, but in going back to its past with the latest technology, Call of Duty feels like it’s heading to a brighter future.