If Microsoft has its way, the Surface Pro is the PC that every busy worker owns: a tablet, laptop and desktop in one that drives sales of Windows for years to come. The original Surface Pro, which only went on sale in May in the UK (2012 in the US), hinted at this ambition but ultimately fell short in a few important ways. The Surface Pro 2 aims to correct its weaknesses but the aim is still very much the same: it wants to be your one and only PC and tablet device.

Surface Pro 2: Video Review
If you’re looking for a quick overview, watch our handy video review of the Surface Pro 2.

Elsewhere, while the basic design remains the same, Microsoft has applied a few tweaks to the formula. The signature built-in kickstand now has two levels, the standard ‘upright’ position (it’s actually not quite as upright as before) and a flatter, more laptop-esque angle. It’s a key difference because it mostly eliminates one of the 2012 Surface Pro’s biggest problems, the awkward angle of the screen when used sat a desk or on your lap. You can now look directly at the screen, rather than peering awkwardly from above. 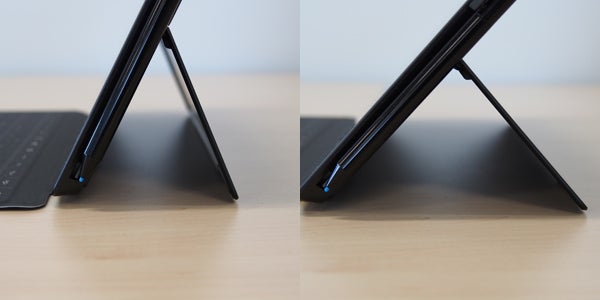 The two ‘optional’ keyboard covers are improved, too. Both the Touch Cover 2 and Type Cover 2 are slimmer and lighter than before, and both are now backlit. The Touch Cover 2, meanwhile, is much more sensitive and accurate. Sadly Microsoft only gave us a Touch Cover 2 and we’ll cover it in more detail later, but suffice it to say now that it’s a huge improvement.

Two more accessories have joined the roster, or rather will join it next year. The Power Cover is a keyboard with built-in battery, while the Docking Station is… well it’s a docking station, but it’s an overdue option given the Surface Pro 2’s potential as a desktop machine. It’s a shame neither are available at launch, but on paper they’re good additions.

Finally, the key change is on the inside as the move to Intel Haswell processors (aka 4th generation Core i) greater efficiency in reduced power and heat. Given Microsoft hasn’t increased the battery capacity in this update, Intel’s new processors carry the whole burden of improving upon the Surface Pro’s woeful battery life of circa four hours. 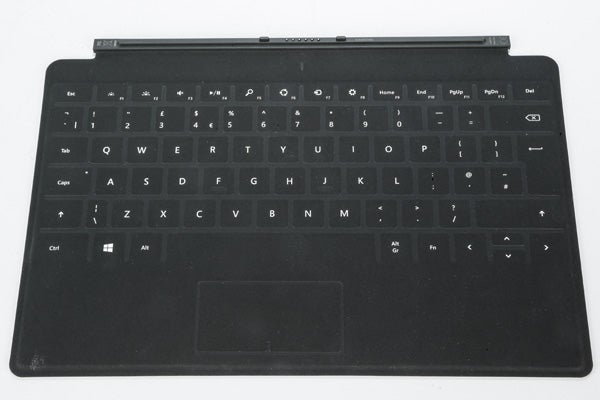 You’ll notice we didn’t talk much about design above, which is because the Surface Pro 2 is near identical to the 2012 Surface Pro. The only physical difference is the new, two-mode kickstand. The new kickstand is huge improvement, however. The screen now sits at a far more comfortable angle when sat at a desk – the screen now points at your eyes rather than your chest. This is an improvement whether you’re working or just watching a video. Indeed, the flatter angle is perfect for watching videos in bed with the Surface Pro 2 perched on your lap. Say hello to lazy weekend mornings!

This is a good change and few others were really needed. The Surface Pro 2’s design is solid and classy, as is the build quality. There are only a couple of minor joins that upset its otherwise seamless frame, while the limited connectivity (a single USB 3.0 port, mini-DisplayPort and microSD) does little to clutter the edges. 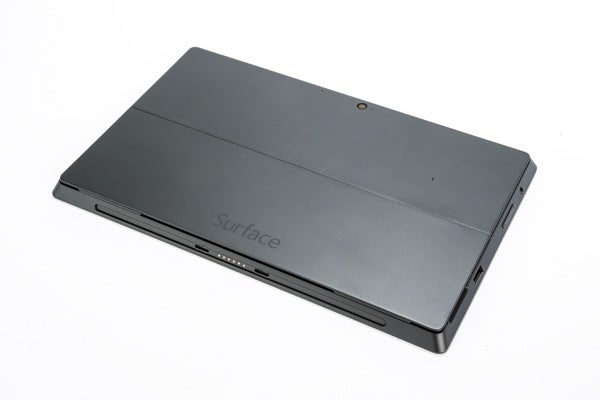 That’s not to say it’s perfect, however. The magnetic power port is still a little weak and fiddly, but more importantly the whole unit could do with going on a diet. The Surface Pro 2 weighs 907g on its own, but that’s really 1.097kg once you add a Touch Cover 2 (190g) and there’s no point in owning a Surface Pro 2 without one or its even heavier Type Cover 2 (255g) cousin. In this respect the Surface Pro 2 is in a kind of purgatory: it’s lighter than Ultrabook laptops, but it’s too heavy compared to pure tablets.

It’s something prospective owners have to make peace with, as does Microsoft to a certain extent. Just shaving 50 or 100g wouldn’t make a huge difference to this perception considering even larger iPads and Android tablets weigh 600g or so, sometimes less. That’s why the Surface 2 (aka the new Surface RT) exists, something we’ll be reviewing soon. 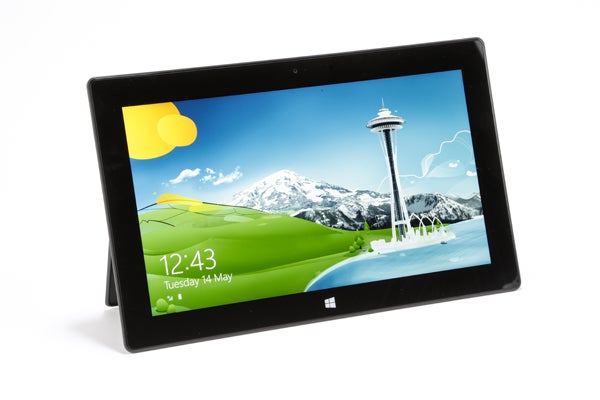 Sticking to the theme of things ‘being the same’, the 10.6-inch screen on the Surface Pro 2 remains as impressive as it was last time around. Its 1,920  x 1,080 resolution is plenty sharp enough at this size, particularly as Microsoft’s ClearType tech smooths the edges on text. It produces plenty of detail, has a nice level of contrast and is supremely bright.

All the above is borne out when measured using our Xrite i1 Display Pro 2, which measured a peak brightness of 442 nits that’s miles higher than the next best laptop (372 nits on the Sony VAIO Pro 13) we’ve tested this year. Its colour temperature of 7,119 is a little on the cool side (6500K is preferable), but the 1.56 DeltaE (a measurement of colour accuracy) is very good indeed.

There are just a couple of issues that prevent us from handing out top marks in this particularly category. The first is the overly aggressive and obtrusive dynamic contrast Microsoft appears to employ. It results in really very obvious steps in perceived brightness between light and dark scenes in videos, but it’s even obvious when watching non-video content. For example, you can see the perceived brightness shift quite clearly when you go predominantly dark screen to one with a bright white background. It’s really irritating and an issue we hope Microsoft fixes in a future update.

The other is the viewing angle is also a little short of the very best in this category. There’s a noticeable of shift from acute angles. Not enough to lose any sleep over, but enough for the Surface Pro 2 to lose a mark.