What is the Huawei P8?

Released in April 2015, the Huawei P8 is the Chinese firm’s first real shot at making a mark in the flagship market, having dipped its toes with the Ascend range. Although Huawei lacks the big-hitting brand name that comes with a Samsung or an Apple handset, it hopes to tempt users away with the P8’s sleek design, iPhone-like aluminium body, along with some solid specs. For the most part it succeeds, too.

The Huawei P8’s octa-core processor, 3GB RAM and high-quality camera proves it’s serious about going toe-to-toe with the big boys. The fact that it’s considerably cheaper than the likes of the iPhone 6, Samsung Galaxy S6, or even the HTC One M9, makes it an even better alternative to one of the big-brand rivals, if you’re looking for something a little different.

The Huawei P8 looks and feels a lot more expensive than its price tag would suggest. It’s beautifully crafted, taking obvious inspiration from the iPhone 6 and Sony Xperia Z3, but with a more angular look and feel.

The Huawei P8 adds some refined touches that distinguish it from the competition, including a smooth glass rectangular section on the back of the phone where the camera sits. The front face of the phone is clean, with no branding, no home button and no unsightly plastic-looking speaker grilles. Take note, Samsung. 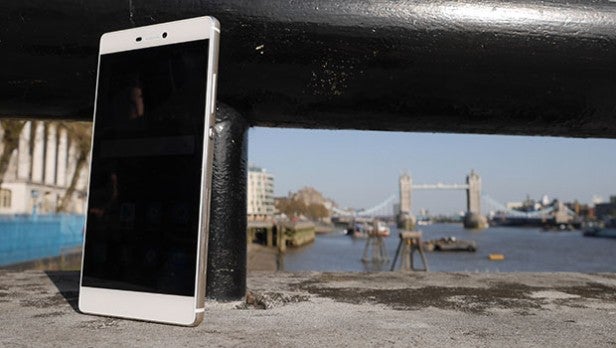 The chiselled curved edges of the P8 are similar to the Samsung Galaxy S6, while the softly textured metal back of the phone echoes that of the iPhone 5. Huawei hasn’t just taken design cues from its rivals though, it’s also followed the trend different colours with ridiculous names. 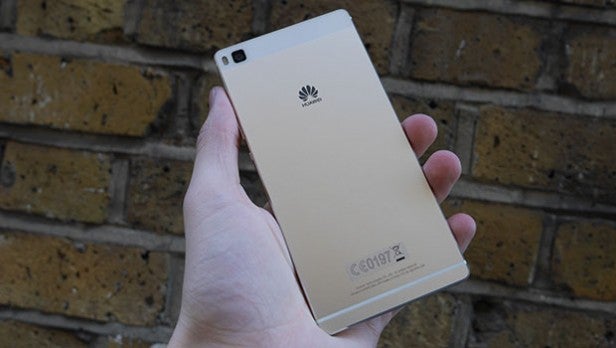 A double tap of the bottom volume key opens the camera and takes a picture when the phone screen is off. It’s a good feature, but it would be easier if the power button was larger, further away or on the opposite side of the phone.

Yet this small weakness doesn’t detract from what’s otherwise a solid and well-built phone. It’s heavier than the iPhone 6 and Samsung Galaxy S6, but it’s lighter than the HTC One M9 and looks as good as any of them despite costing nearly half as much.

The 5.2-inch screen on the Huawei P8 is a touch larger than the one on the Galaxy S6, but the thin bezel means it doesn’t take up too much more space. And, while it isn’t Quad HD like the S6, it’s one of the finest Full HD screens we’ve seen in a phone. It’s big, it’s bright and it’s useable in all lighting conditions.

Huawei’s Emotion UI includes some options for adjusting the P8 screen’s colour temperature and we used it to counter the phone’s apparent natural bias towards warmer tones. The display options in settings offer a sliding scale between warm and cold, and we found that nudging the slider one position to the right gave us a more natural colour balance. 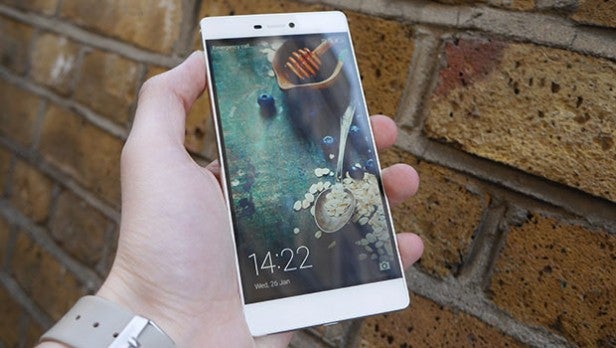 That isn’t to say that this phone is particularly bad when it comes to colour reproduction, though. Overall, it does a good job of rendering colours vibrantly, but if you pay attention to Red and Magenta tones, it’s clear there is some oversaturation taking place.

Side-by-side with some of the other flagship phones, the P8 manages to hold its own. Next to the Galaxy S6, the P8 appears to deliver slightly punchier colours, but it can’t match it for detail, deep blacks or clean white tones. Held up next to the HTC One M9, the P8 edges its more expensive rival.

The P8’s screen looks good at acute viewing angles and adapts to changing light conditions well, too. This is one particular area where the P8 really impresses, though it’s by no means the only area – it’s a great screen all round.