A 2400mAh battery provides the juice for the HTC Desire EYE. This is smaller than the battery on the One M8, and that’s not a good sign for a phone with a bigger, brighter screen.

The Desire EYE’s stamina isn’t bad; it just doesn’t reach the lofty levels of the HTC One M8 or Galaxy S5. It’s nearer the more average iPhone 6, but even a little below that. 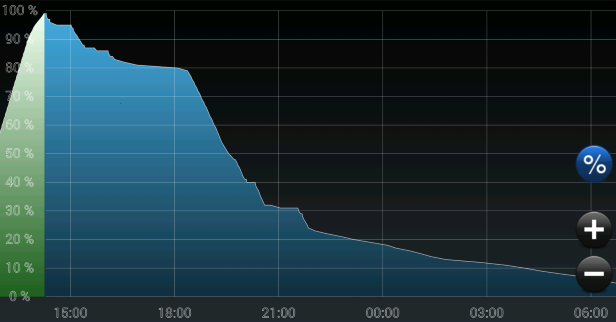 An example of how the EYE lasts. The big drop comes from gaming

We managed to squeeze seven and a half hours of mixed use with the screen at two-thirds brightness. This included four hours of web browsing (4G and Wi-Fi), an hour of gaming, an hour and half of video streaming (Wi-Fi) and a few calls and photos. 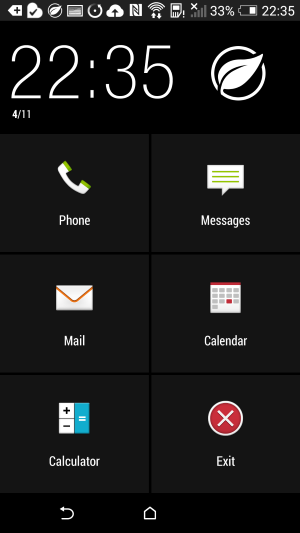 In our standard test of playing a non-stop onboard standard-definition video on loop, the HTC managed 9 hours. That’s less than the flagships, but by no means bad. The fact that we compare it to these top phones just goes to show the esteem we hold the Desire EYE in.

Like most smartphones the Desire EYE will last you a day, but you’ll want to charge it before you go to bed. An extreme power-saving mode helps you eek out a few extra hours if you’re in a tight spot, although the phone becomes dreadfully dull in this state. Data-driven apps won’t update and you’re limited to calls, messages, emailing, checking your calendar and using the calculator.

The internal speaker packs as much of a punch as the external ones. It’s very loud at full volume, although voices do distort a little. If you have hearing problems you’ll appreciate the punchy sound of the HTC Desire EYE’s earpiece.

Voice quality on the other end is solid, too, thanks to the noise-cancelling mic on the back of the phone. This is a staple of higher-end phones these days and makes a huge difference when you’re in a noisy environment and someone is trying to hear you.

Should I buy the HTC Desire EYE?

The HTC Desire EYE is a selfie-lover’s dream, but it’s the rest of the phone that surprised us. The performance is at flagship level, it’s water resistant and the design is, in the large part, solid. There isn’t another phone that directly compares.

The OnePlus One costs a fair bit less and comes with a reasonable 5-megapixel front-facing camera. That phone is hard to get, though, as supply is limited. Another alternative is the slightly cheaper Nokia Lumia 830, but the front camera isn’t as good and it’s not as much fun to use because of middling performance.

A final thing to consider is its size. This is a big phone, so if you’re not sure you can handle it, give it a whirl first.

The cameras may be what everyone is talking about, but the HTC Desire is a phone that can hold its head high in any company.