This is the definitive way to experience Horizon Zero Dawn and the Frozen Wilds expansion if you're in possession of a PC to take advantage of its highest settings. While the PS4 version is still a stellar achievement in its own right, this port pushes the envelope further in terms visuals and performance that it's simply more enjoyable to play. Much like Death Stranding before it, this is yet another console exclusive finding a second home on PC.

Editor’s Note: Our critical thoughts on Horizon Zero Dawn haven’t changed since our original review, you can read our scored verdict here, as this article will focus primarily on the PC version’s technical performance.

Guerilla Games’ subverted expectations in the most spectacular way with Horizon Zero Dawn. Previously known for the competent yet ultimately underwhelming Killzone franchise, the studio bravely ventured into the realm of open-world games and produced something extraordinary.

Aloy’s debut adventure was a breathtaking glimpse at a post-apocalyptic world filled with mechanical beasts that are one of the only signs of how this society crumpled into nothingness before a new tribal identity rose from the ashes. Here, humanity flourished once more.

While it faltered in its storytelling and tried-and-true approach to the genre, Horizon Zero Dawn excelled still thanks to satisfying combat and some of the best visuals we’ve seen this generation. Now, it’s come to PC as one of the first major PS4 exclusives to find a home on the platform. 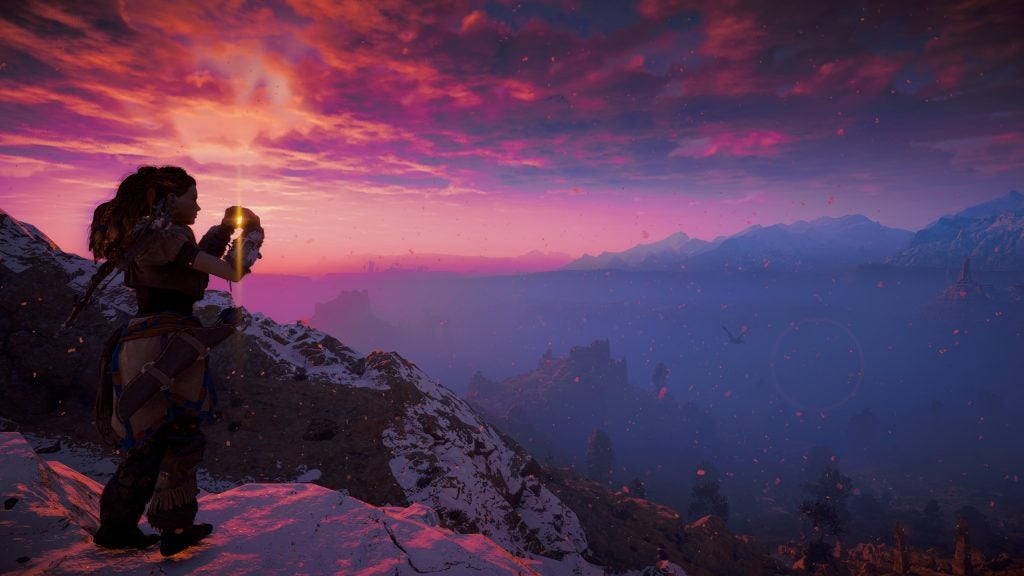 If you have the necessary hardware to make it shine, this is the definitive way to experience Horizon Zero Dawn with gorgeous graphics, improved performance and a few extra bells and whistles.

Having launched obscenely close to The Legend of Zelda: Breath of the Wild back in 2017, I bounced off Horizon Zero Dawn the first time I jumped into it. Over the years, I’ve tried time and time again to crack the egg so many others had been feasting on and telling me how transcendent it was, but to no avail.

That changed with this translation to PC, largely because it remedied one of my biggest qualms with the original release. Field of view can now be adjusted at your leisure, making the third-person perspective far less claustrophobic and detrimental to the world you’re exploring. Before I found such limitations oddly frustrating, but with the extra power afforded on PC, it became a thing of the past.

Being able to adjust the field of view makes it so much nicer to play. The environment around Aloy is tremendously alive, even more so thanks to new dynamic foliage, and being able to see it all without compromise is genuinely breathtaking. This addition isn’t just a visual improvement either, it makes combat with certain adversaries far less frustrating when you can easily see them coming instead of being decked offscreen for the hundredth time. 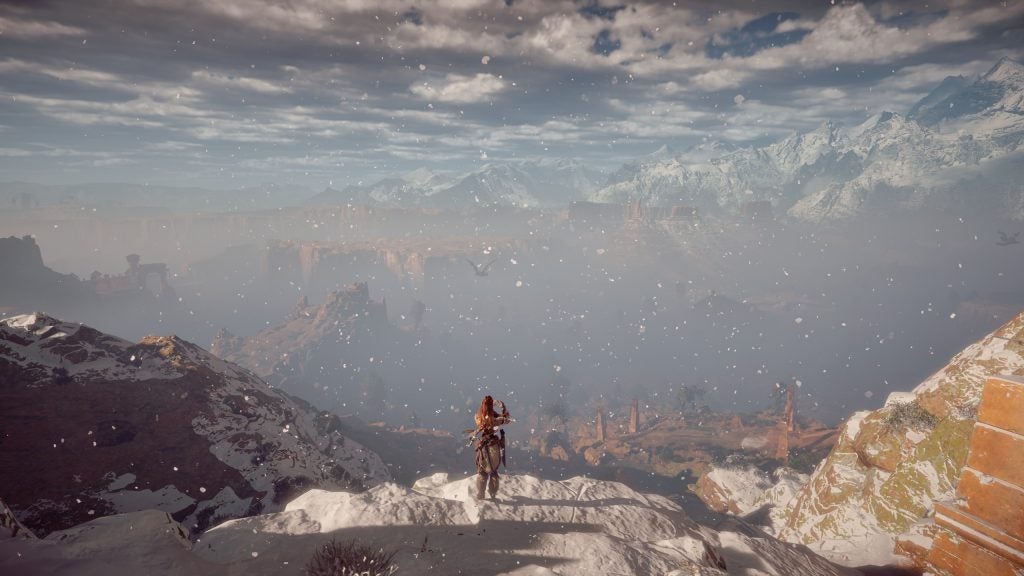 For context, I played Horizon Zero Dawn in Quad HD with an Nvidia RTX 2080 Ti and AMD Ryzen 5 1600, and was able to reach an average of 57 frames per second on maximum settings using the in-game benchmark. I found this result to fluctuate towards higher values when playing, allowing for smooth combat and exploration in the majority of instances.

I can’t speak for how it performs on other hardware configurations, but Guerrilla is aware of certain issues and will address them with a Day One patch. We’ll reflect on the changes this brings when we can. There have been reports of some GPUs failing to reach a sustainable level of performance, a problem we hope is addressed before launch given the 35GB patch which has been pushed ahead of general release. Time will tell, since there’s a worthwhile port here.

Things do buckle somewhat once you reach bigger areas with stunning draw distances, but it never felt unpleasant. If you prefer a more consistent rate of performance, you can lock the framerate to a specific limit, a method which worked surprisingly well in my experience. If I wasn’t stubborn and simply downgraded my visual settings, I could be achieving a stunning level of performance and visual fidelity that still far surpasses its console counterparts.

Guerilla Games has been surprisingly honest about the inner workings of this port, stating that beyond a few subtle changes, all character models and environmental assets remain untouched when compared to the console version. However, they can be pushed much further now with the right hardware. Loading times and scene transitions are also much faster now (depending on your SSD speeds), giving every minute interaction a greater sense of finesse. 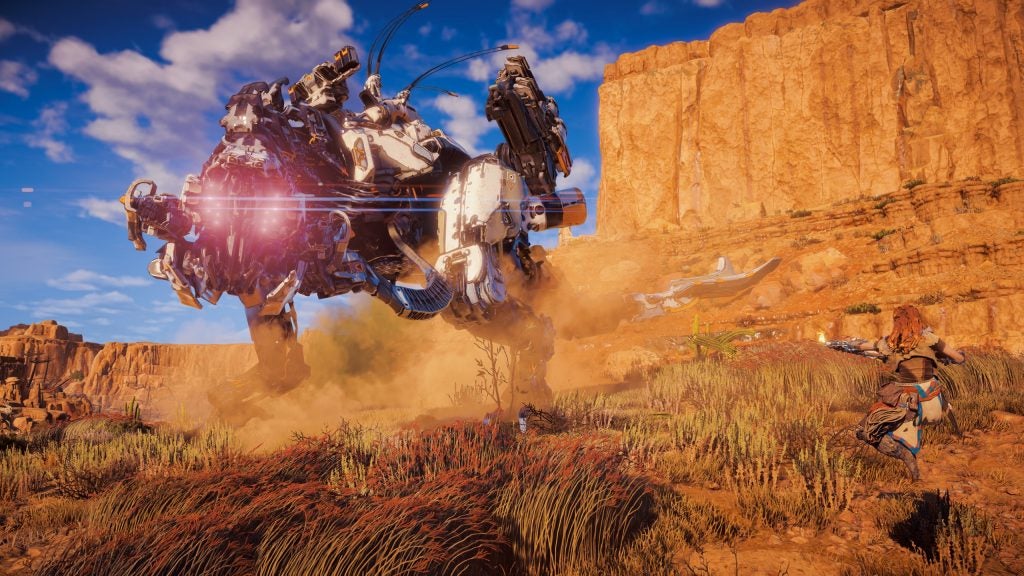 On PS4 Pro, Horizon Zero Dawn is beautiful, and easily one of the best-looking games out there, but being able to build upon that with increased detail, draw distances and performance results in something genuinely jaw dropping. Far too often I’d sprint towards a hillside or towards a mountain’s peak simply to activate photo mode and bask in the splendour of it all. If you have a compatible display, you can also take advantage of HDR. Sadly, there’s no DLSS or ray tracing support to be found here, which is a shame if you’ve got a Nvidia RTX GPU or plan on buying a Nvidia Ampere graphics card in the coming months.

If you didn’t click with Horizon Zero Dawn on PS4, it’s safe to say this PC port won’t change your mind. Aside from superior visuals and a few welcome quality of life improvements, this is the same post-apocalyptic marvel from a few years ago. I still have my qualms with it. The story and character development is underwhelming, only really growing into something wonderful in the later hours. Its questionable depiction of tribal identities also leaves an ill taste in mouth.

Excellent combat and exploration is hindered by open-world design conventions which we’ve seen before countless times, so if you’re just coming from Ghost of Tsushima, maybe give this one a few weeks to stew before jumping on it. But if you’re already a lover of Aloy’s adventure and have a gaming rig to truly take advantage of this port, it’s definitely worth jumping in if you fancy a revisit.

This is the definitive way to experience Horizon Zero Dawn and the Frozen Wilds expansion if you’re in possession of a PC to take advantage of its highest settings. While the PS4 version is still a stellar achievement in its own right, this port pushes the envelope further in terms visuals and performance that it’s simply more enjoyable to play. Much like Death Stranding before it, this is yet another console exclusive finding a second home on PC, and I’m so happy it’s here to stay.