AMD made quite a splash with the launch of its first Ryzen CPUs. The Ryzen 7 1800X was so good it became the first AMD CPU TrustedReviews has strongly recommended in the better part of ten years. But, the 1800X and the other two Ryzen 7 processors that launched a month or so ago are all high-end products with eight cores and price tags to match. That’s where the Ryzen 5 chips come in.

Launching today, the Ryzen 5 processors are available in six and quad-core configurations, and have a far lower upfront cost. This makes them ideal for more mainstream and enthusiast users who want a powerful processors but don’t really need, or can’t afford, the massive multi-core power of a Ryzen 7 CPU.

There are four processors that make up the Ryzen 5 lineup, two of which are quad-core and two six-core. I’ll be looking at the top tier versions of each, the quad-core 1500X and the six-core 1600X.

The Ryzen 5 processors are the second set of chips to arrive from AMD’s full Ryzen range. In the second half of the year we can expect to see Ryzen 3 chips. With the addition of these four new processors, the Ryzen range now extends from the £330-£500 of the Ryzen 7 chips, down to the £160-£250 of Ryzen 5. This pits them against Intel’s Core i5-7600K at the top end and a variety of dual- and quad-core processors at the lower end.

What’s striking about the entire Ryzen range so far, including these new Ryzen 5 chips, is that they all have essentially identical features, apart from the number of cores and their clock speeds. All are multiplier unlocked for easy overclocking, all include simultaneous multithreading (SMT), all include Precision Boost and all fit in the same motherboards.

The only other differentiator is the X on the end of the model numbers which tells us whether the chip has extended frequency range (XFR). This allows the processor to boost the clock speed of one of its cores just a tiny bit further than non ‘X’ chips – up to 50MHz more, to be precise.

This is all in contrast to the way Intel has compartmentalised its CPU range where different chips will or won’t have Hyperthreading (Intel’s equivalent of SMT), only a few processors are multiplier unlocked for easy overclocking, some don’t include Turbo Boost (Intel’s euivalent of Precision Boost) and you need to invest in completely different platforms if you want to move from a quad-core CPU to a six- or eight-core CPU. 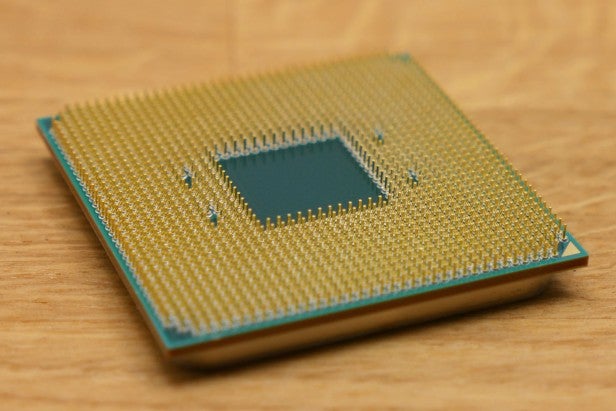 Intel doesn’t have any six-core processors at this price (regardless of platform) and the only quad-core chips it offers don’t include Hyperthreading. This means the Ryzen 5 1600X should be a shoe-in for that middle ground between the eight-core Ryzens and cheaper quad-core processors.

Related: The best CPUs for gaming

It’s priced to compete with the Intel Core i5-7600K and while Intel’s chip has a clock speed advantage that will make it faster in single-thread applications, it’s only quad-core without hyperthreading. This means the 1600X should have a handy advantage when it comes to multi-threaded workloads, such a rendering video footage.

Meanwhile, the 1500X comes up against two Intel processors: the Intel Core i5-7400 and the Core i3-7350K. The former is quad-core but again it lacks hyperthreading and is actually clocked slower than the 1500X, so AMD’s chip should compete on single-thread then run away with the victory in multi-thread.

The i3-7350K is a different story. It’s clocked at the same base clock speed as the i7-7700K and can be overclocked to 5GHz, giving it a massive clock speed advantage that will make it quicker in many day to day single-threaded applications and games. However, it’s only dual-core (though with hyperthreading) and doesn’t have Turbo Boost Technology so its single-thread advantage isn’t as high as it could be and heavy multi-taskers and those that need multi-thread processing power will find it lacking.

Competition aside, it is a little disappointing AMD couldn’t squeeze a little more clock speed out of the 1500X. As the flagship quad-core part it would be nice to see it reaching the same speeds as the 1800X and 1600X, in the same way that the Intel Core i3-7350K matches the i7-7700K.

That leaves the Ryzen 5 1600 and 1500, which we’re not reviewing here. As non-X processors they generally have slower clock speeds and miss out on XFR. However, as they have SMT and are overclockable they still have the potential to be speed demons, and the £30 saving for the 1600 could make it a particularly tempting option for those after as much mutli-core performance as possible for the least money.

All the Ryzen 5 processors are built on the same foundation, which also powers the Ryzen 7 chips. The Zen micro-architecture was built from the ground up to address the power consumption and performance-per-clock issues of previous AMD processors.

AMD employed a host of techniques to achieve this, which we won’t cover in depth here – you can read more about Zen in our 1800X review – but we’ll highlight a few of the key points.

The new design has boosted instructions per clock by 52%. A move that has brought AMD near enough to parity with Intel after years of trailing far behind. As a result, if the two companies released a processor each with an identical number of cores and clock speed they should produce near-identical performance. However, as it is right now Intel still has a maximum clock speed advantage so AMD is throwing cores at the problem.

Another key addition with Ryzen is simultaneous multithreading. This is AMD’s answer to Intel’s Hyperthreading technology that allows each core of the processor to juggle two threads at a time, so it can deal more efficiently with its workload. This makes the processor appear to software like it has double the number of cores and results in a performance increase of between 10% and 30%. 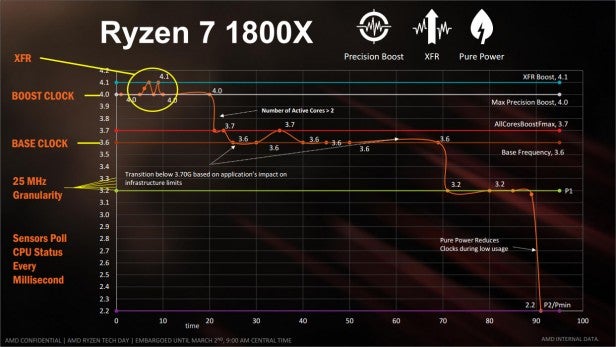 The third key aspect to Zen is that power consumption has greatly improved. AMD’s previous performance champ, the eight-core FX-8 9590, had a thermal design power (TDP) of 219W. The 1800X has a TDP of just 95W, while the Ryzen 5 range are all just 65W. Again, this essentially puts AMD’s processors on a level with Intel.

Another feature of Ryzen is Precision Boost. This is internal overclocking akin to Intel’s Turbo Boost technology where you have a base clock frequency and then all the cores of the processor can overclock to a second higher frequency when needed, CPU temperature depending. Meanwhile XFR is a final little push that can be given to one core of the chip when it’s under heavy load.

You’ll most likely have to buy a new CPU cooler to fit the AM4 socket, though unlike Ryzen 7, some of the Ryzen 5 range can be purchased with included coolers.

Next
Performance and Overclocking Review