Following on from last year’s PS3 and PS Vita remaster, Square-Enix has now updated Final Fantasy X and its oddball sequel for PS4. Both games now come with further visual enhancements, and while it’s unlikely these will make an extra purchase worthwhile if you played them last year, they add enough to the experience to make this the definitive version.

The key upgrades affect clarity and colour. Both games now run in 1080p at a smooth 30fps, with anti-aliasing enabled and minor improvements to lighting and shading. Some of the textures which looked a little rough in the PS3 and Vita version appear to have been rebuilt, and the cumulative effect is to make Square’s consistently superb artwork look better than it ever has before. If the PS3 and Vita versions seemed to reveal new layers of detail and colour in the world of Spira, then the PS4 version takes that one stage further, occasionally coming close to closing the chasm between the in-game visuals and the cut-scenes. 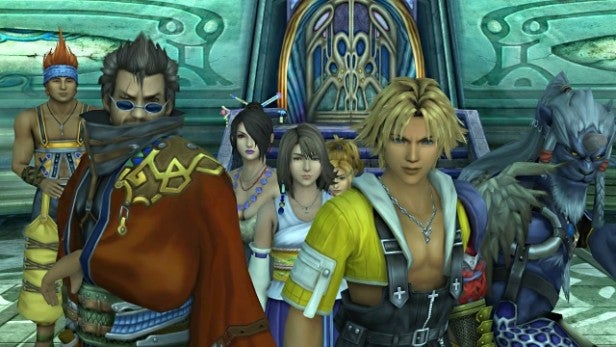 The characters and monsters also benefit. Square-Enix had already remodelled the main characters for last year’s versions, but some – particularly Yuna, Paine and Riku in Final Fantasy X-2 – come alive on PS4. More of the supporting cast have also rebuilt, too, with more rounded models here, more detailed textures there, making the most of the crisper presentation. There’s more room to appreciate the attention that has gone into the costume design, spell effects and hairdos.

Let’s not get carried away. Both games still look dated, with their static backgrounds and stilted animation – not to mention facial animation and lip-syncing systems that are clearly of their era. Not every scene or character has been brushed up, either, making for some jarring contrasts between the key cast members and some background villagers and flunkies, with some really odd-looking, angular faces to be found. And while Square-Enix has radically improved the resolution, lighting and skin textures in the cut-scenes, that kind of advanced stuff still hasn’t made the transition to the in-game engine. If you’re hoping for a remaster as comprehensive as Nintendo’s work on The Legend of Zelda: Wind Waker HD, this isn’t it. 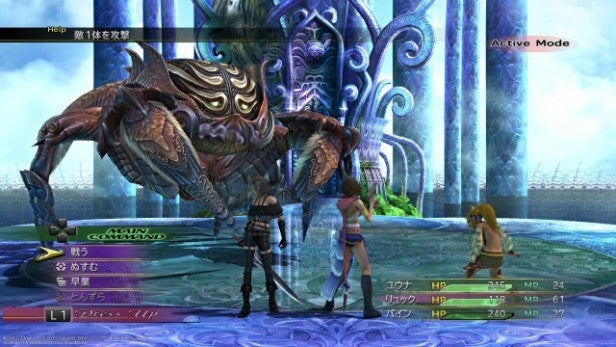 Other changes are pretty minor. Both the Eternal Calm Final Fantasy X epilogue and the Final Fantasy X-2 Last Mission epilogue are available from the main game select screen, and you can switch to the classic Final Fantasy X soundtrack if that’s the version you prefer. You can also take your saved game from the PS3 or Vita version, upload it and continue where you left off on PS4; handy if you’re halfway through last year’s release.

Of course, we’re not so sure that anyone who already bought last year’s release should cough up another £30 or so for this year’s. It’s a crisper, smoother-running, prettier version, but effectively the same game. It still has protracted, mostly unskippable cut-scenes, an over-convoluted character progress system and – in Tidus – the whiniest and most annoying of all Final Fantasy’s whiny and annoying protagonists. The Blitz Ball sub-game isn’t any more fun that it was some fourteen years ago, and Final Fantasy X-II remains very much an acquired taste. 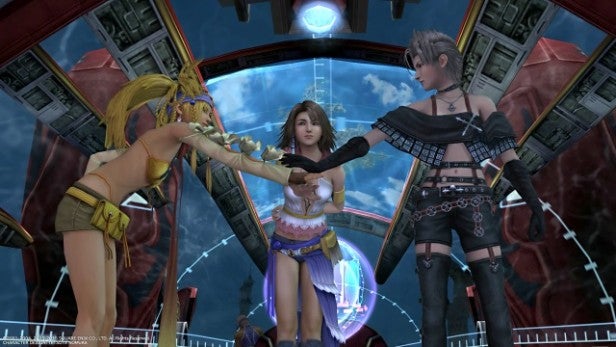 It also leaves you wishing Square-Enix might have focused on a PS4 version of Final Fantasy XII instead. Now, there’s a game where new models, textures, lighting and effects could go to work on a more fully-realised, fully 3D world.

But if you didn’t invest in the PS3 or Vita versions, then this compilation is much easier to recommend. It’s another chance to sample Final Fantasy at its peak, before the disasters of Final Fantasy XIII, and it’s surprising how engrossing both games become once you get used to the dated style. Tidus might not be Final Fantasy’s best hero, but the Square that made Final Fantasy X knew how to craft a clear, epic, emotionally-engaging story in a world you wanted to – and could – explore. Fans love these games for a good reason.

It’s sad to say, but if you try to think of the best Japanese RPGs of recent years you might come back with Ni No Kuni, a Fire Emblem, a Dragon Quest, a Bravely Default, a Persona or even a Tales Of…, but chances are that a Final Fantasy won’t spring immediately to mind.

Final Fantasy X/X-2 HD Remaster, then, isn’t just a nostalgia exercise or a bargain compilation for RPG fans – though it works on both counts – but a chance to reconnect with what Final Fantasy was before the rot set in. While there are signs of that rot already if you look hard enough, it’s still a chance you’ll want to take.

Final Fantasy X is the more conventional of the two. It’s the saga of a plucky teenage superstar jock with father issues, who witnesses the destruction of his city by a demonic whale-like entity, Sin, then awakens in the distant future to find the world he knew gone, but Sin very much at large. Our hero, Tidus, soon gets involved with a gang of travellers, seemingly fated to confront Sin one last time and set the world to rights.

Final Fantasy X can be a cheerful, sunlit piece of work – leagues away from the tiresome, baroque melodrama of Final Fantasy XIII – yet it smoothly shifts to fit in deeper, darker elements as time goes on.

In Tidus it has one of the most instantly dislikeable heroes in gaming – a shorts and vest-clad meathead with the vocabulary of Bill S Preston and Ted Theodore Logan but none of the charm – yet after a few hours in he doesn’t seem so bad, partly because he’s surrounded by more likable team-mates, and partly because there’s more to him than immediately meets the eye. 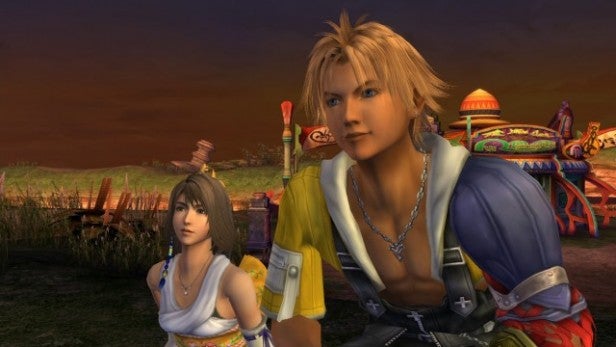 In terms of systems, Final Fantasy X did its best to shake up the franchise. Battles still work in a kind-of pseudo real-time, with gauges that fill up before your hero can execute the next command, but you can switch characters in and out of your three-person party without any penalty, and there’s a level of strategy to the different attacks, buffs and special moves. Spells and summonings are present and correct, and one of the great pleasures is still calling down some huge beastie from the ether to battle on your behalf until they or your enemies go down.

The Sphere Grid levelling system hasn’t aged quite so well. You boost your character’s abilities and unlock new ones by collecting different spheres and laying them out as you move around tracks on an arcane grid, and while this makes it possibly to tailor your heroes so they’re just how you want them it also seems overly-complex and quite hard to understand.

There are minor problems with the difficult curve, which peaks and ebbs without any real sense or warning. These points and some painfully lengthy cut-scenes, replete with ripe examples of truly woeful dialogue, are about the only things that let the game down. 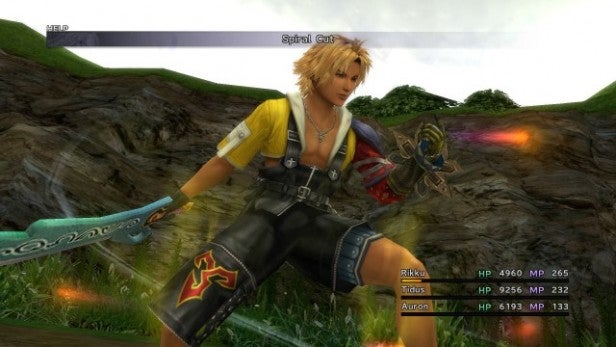 On the whole, though, Final Fantasy X just works. It’s well-paced, there’s space to explore and discover secrets, and the game doesn’t push you from battle to battle while shoving platefuls of raw exposition down your gullet. It understands that in any adventure, discovery plays a crucial part.

Final Fantasy X-2 isn’t quite as successful, and it’s also, well, a little bit odd. Set after Final Fantasy X, it focuses in on three female protagonists, Yuna and Riku from the first game along with a third, mysterious female Elvis impersonator, Paine.

The development team was apparently inspired by Charlie’s Angels, and it shows. Final Fantasy X-2 is camp, cheerfully silly and unafraid to coast along on good looks, glamour and daffy charm. 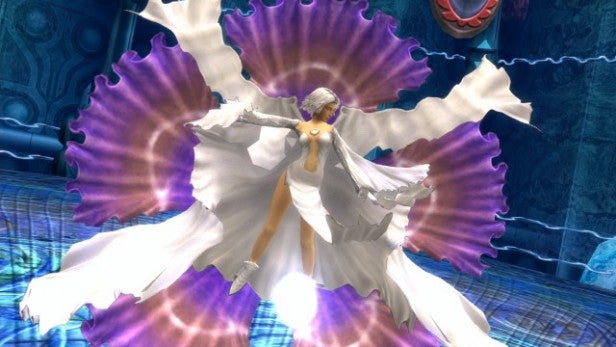 Nowhere is this more visible than in the combat system, which sees our three heroines switching in and out of different costumes mid-battle to choose different capabilities and – effectively – change class. The costumes sometimes make it hard to work out whether Square was targeting female gamers or dirty old (or young) men, but it’s a fun idea. It’s just a shame Square-Enix couldn’t make it work a second time around when it appropriated it for the deeply dreary Lightning Returns: Final Fantasy XIII.

Final Fantasy X-2 might be lightweight, but that doesn’t mean it doesn’t innovate. You get an airship to fly around in from the start, and you can select where to go and what to do in almost any order, though some missions only become available once you’ve completed others.

Each mission progresses a particular storyline or character arc, and they all build together to create a lightweight narrative that just about works. Again, Square-Enix tried a variation of the structure in Final Fantasy XIII-2. Again it didn’t quite work out. 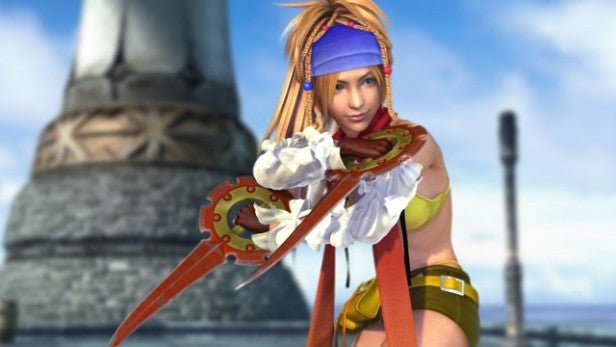 Final Fantasy X-2 was divisive at launch and it’s divisive still. It works hard to entertain and it’s beautifully made, but some will find the whole style just too irritating, and some of those might not even make it past the, erm, dazzling J-Pop musical intro sequence.

It has an absolutely baffling Pokemon-esque side-game, and re-uses locations and characters with the kind of money-saving zeal that puts vintage Hammer horror films to shame. On balance, though, it’s weirdly ingratiating. We began Final Fantasy X-2 not entirely sure that we could bear more than an hour, yet a few hours in it’s peculiarities began to seem quite normal.

Whatever you think of the individual games, there are no complaints to be had about the standard of conversion. The visuals have been updated to 720p HD, and while the PS Vita’s screen can’t actually resolve that much detail, it still looks like a crisper, cleaner version of the already good-looking PS2 original. Square still does weird costumes, elaborate swords and baroque sci-fantasy architecture better than anyone else bar Capcom, and when it made Final Fantasy X it was right at the top of its game.

PS Vita-specific features, meanwhile, have been constrained to quick slide-in menus for automatic healing or the length of combat cinematics. With optional missions and International Version extras added in, you’re getting the best possible versions of both games. 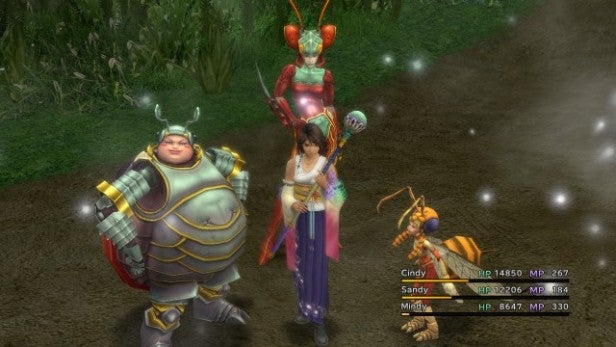 Neither is the best Japanese RPG ever made, or even the best Final Fantasy, but Final Fantasy X stands up as a fine example of the genre, and X-2 is worth taking for a spin, if only to see how bonkers a mainstream RPG can get. As we said in the Metal Gear Solid V: Ground Zeroes review, you shouldn’t measure the worth of the game by the hour, but it’s hard to think of another package that delivers so many hours of gameplay for so reasonable a price.

Verdict
A sterling HD update of a fine Final Fantasy that has stood the test of time, and one weird offshoot that has to be played to be believed. Neither is perfect, either as an example of the genre or a specimen of the series, but Final Fantasy X in particular is a reminder that Final Fantasy used to stand for something great. A good buy for PS3 RPG fans, and an even better one on PS Vita, but the PS4 version is now the definitive edition.