The PS Vita Slim has finally been announced for the UK. It was released in Japan back in 2013, and we weren’t sure whether we’d ever see the new handheld on our shores. But it’s here.

We’ve looked into what’s new to find out whether you should buy a new Vita or an old one.

We talked to Sony PlayStation’s head of hardware Ben Law at the launch of the second-generation Vita. You can have a look at what the system looks like, and what’s new below.

The new Vita Slim isn’t a huge departure from the original Vita in terms of design, but there are some changes.
Sony has made the Vita a good deal smoother and curvier. All the sharp edges have been softened to give the handheld a better, softer feel.

Looking at the pure numbers, the most significant alteration is how thick the Vita is. The old Vita was 18.6mm thick, the new one is 15mm thick. This brings it closer to the thickness we expect of modern tablets and phones. Next to those kinds of devices, the original Vita is a bit of a chunky brick.

The console is also significantly lighter. It is now 219g, shedding just over 40g from the original 260g. It’s significant in terms of per cent but hardly a major consideration when the Vita is something you’ll almost always hold in two hands.

A curvy, slimmer design has made the new Vita ever so slightly longer and taller than the first Vita, but only by a couple of millimetres in each dimension. It’s nothing worth worrying about.

The Vita Slim comes in a bunch of different colours where the original only comes in black. Sony seems to be aiming for a more accessible, friendlier style with the Slim, where the original’s more angular look exuded a sort of sophisticated that went hand-in-hand with bigging-up how high-tech the thing was back in 2012. 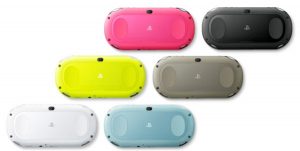 There are some other little changes, too. The Vita logo no longer lights-up to show the Vita is charging or operating. Instead there are two separate LEDs up on the top of the console to do the same job. We imagine this is easier – and cheaper – to execute than the old style.

The construction of the top layer of the display is also a little less graceful. In the original Vita it was a single flat plane of plastic, giving a smooth surface across the front of the console. This time the Vita has a seam that sits around the screen, between the display and controls.

Sony has also made the rear touch panel smaller. This sounds like a downgrade, but there’s a positive reason for it. A smaller rear panel means you’ll press it accidentally less often. 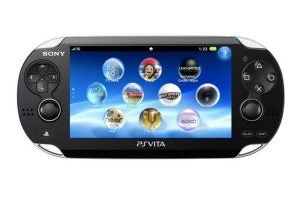 Perhaps the most significant change between the Vita generations is the screen type. The first Vita has an OLED screen, the Vita Slim an LCD screen. This has helped lower the cost of making the handheld console, letting Sony be a bit more aggressive with its pricing.

However, it’s not really an upgrade. The resolution – predictably – hasn’t changed from the original 950 x 540 pixels. And by current phone standards that’s pretty low. 5-inch phones of last year tended to use 1080p screens with four times the number of pixels as the Vita. So while it’s an upgrade, it doesn’t remotely bring the handheld up to date, technologically.

The Vita’s LCD screen also has some image quality limitations. Although pretty good, contrast and black level do not match those of the first Vita. OLED screens are capable of near-perfect contrast and black level, and the difference becomes pretty clear in a dark room. Blacks will look a little bit grey – worth considering if you like playing your Vita in bed.

Motion handling is a bit worse on the new screen and colours are less vivid. There’s greater loss of brightness with angled viewing with the LCD screen, but maximum brightness is greater on the new model.

We prefer the old screen. 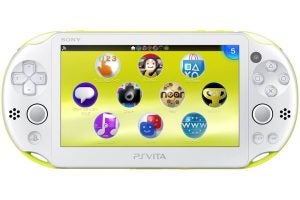 A genuine postitive change in the PS Vita Slim is that it uses a standard microUSB port instead of the proprietary port seen in the first handheld. This means you can charge it with the same charger as your phone – if you use an Android or Windows phone rather than an iPhone. It’s a huge convenience benefit for most people.

Battery life has also been improved. You’ll get up to six hours of gameplay out of a charge rather than around five. As before, though, there’s no easy access to the battery unit should it start losing stamina.

Although there are plenty of external changes in the second Vita, the brains that run the show are functionally identical. Both Vita generations have quad-core Cortex-A9 processors, 512MB of RAM and 128MB of discrete video RAM. And they use the PowerVR SGX543MP4-plus GPU.

If you’ve seen talk of a 1GB memory upgrade, this is used just for game/media storage, not to speed the handheld up. It means you’ll be able to make game saves without a memory card.

And the Vita PCH-2000 still uses the proprietary Sony memory cards. They are much more expensive than SD cards of the same size – 16GB cards rarely get cheaper than £25 when 16GB SD cards cost less than £10.

Which should I buy?

If you already have a PS Vita, there’s little need to upgrade to this one. It’s a more convenient, slightly smaller console, but it is not flat-out better. The screen of the first Vita is better in a few different respects and its construction is a little better too.

If you’re looking to buy your first Vita, we recommend seeing if you can get a cut-price deal on an old model from a retailer like Tesco, Shop-to, HMV etc. – online or otherwise. Big chains will be looking to clear out their first-generation Vitas in the coming weeks, so you may be able to grab a bargain. However, if they’re the same price the comfier, smaller body and better batter life of the new version make it the one to buy unless you’re a screen quality fanatic.