There’s an unwritten law when it comes to reviewing RPGs. “Thou shalt not compare Japanese and Western variations on the genre.” Up to a point this makes sense, Japanese RPGs are very different from their western equivalents, prizing narrative flow and intricate combat strategy over freedom of choice and deep character development. All the same, it’s hard not to notice that while Western RPGs have spent the last few years creating a more streamlined, accessible experience, Japanese RPGs seem to have got stuck in a rut. The graphics have been getting prettier, the English translations and voicework have improved beyond all recognition, but the gameplay has stayed still, with the same turn-based battles, irritating random encounters and over-complex game mechanics that bothered many of us with Final Fantasy VII. The best games from Bioware, Obsidian and Bethesda have held onto what made the US RPG special while still finding hooks to grab a mainstream audience. Isn’t it time for a game that does the same for the Japanese experience?


Guess so, because Final Fantasy XII is it. 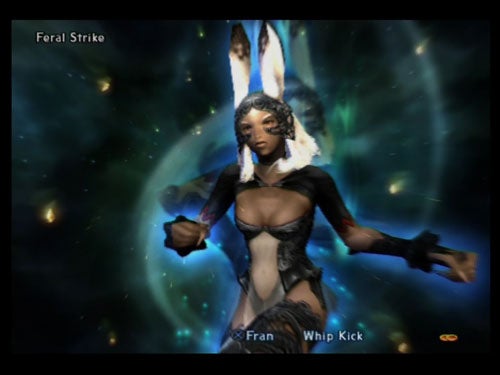 This is a game in which all the underlying mechanics of the genre have been comprehensively rebuilt. Let’s take that old bugbear – the random battle – for example. No longer are you wandering around in the game world when, from out of nowhere, you’re switched to the turn-based action view to find yourself in combat with four Vile Badgers (level 3). You can walk through the levels as you would in other games, look for hostile forces in the mini-map, and avoid them if you choose. When an enemy does spot you, a tracer-line shoots a graceful red arc from your foe to your character, and you can see exactly what the danger is and where it’s coming from. Target a foe yourself, and a blue arc links you to him. It’s simple. It’s visual. It works. 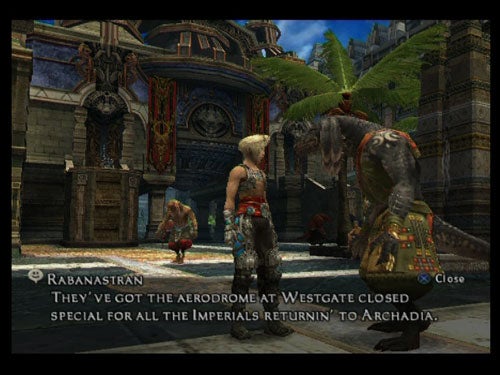 This is true of so many of FFXII’s gameplay and interface enhancements. Square-Enix has successfully bridged the old gap between gameplay and combat, giving you direct, hands-on control of your party leader, and leaving the rest of the work to a set of surprisingly clever and – more importantly – programmable AIs. Battle is no-longer turn based. In a system reminiscent of Bioware’s work on Knights of the Old Republic, you move your party leader in real time and pause the action to assign him targets. 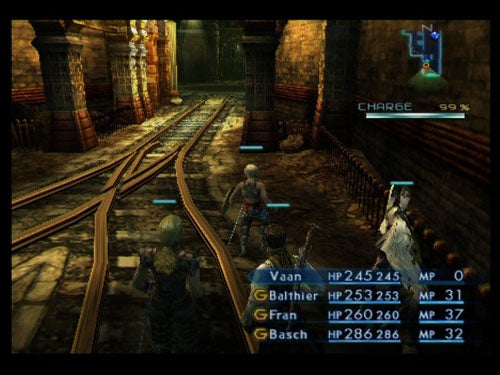 Meanwhile, your other warriors follow a system of ‘Gambits’; simple instructions that tell them to, say, attack your party leader’s target, aim specific spells at specific types of foe or heal any party member should they slip below 40 per cent health. By changing the order of gambits, you can instantly change that character’s priorities. Ingeniously, Square-Enix has even made Gambits part and parcel of your character’s progression. At first, Gambit options are limited, but further Gambits can be unlocked and purchased later. 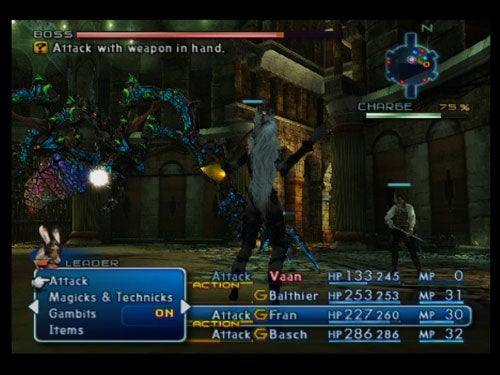 This all happens on the License Board. FFXII uses a skill-tree – not unlike the Sphere Grid system of FFX – where license points acquired during combat are used to unlock skill squares on the license board. These may cover types and levels of spell, weapon skills, first-aid or combat techniques, attribute improvements or armour requirements, and unlocking one opens up adjacent squares to be unlocked in future. It’s a hugely flexible system, and one that allows each character to follow a particular path or keep their options open as you wish. 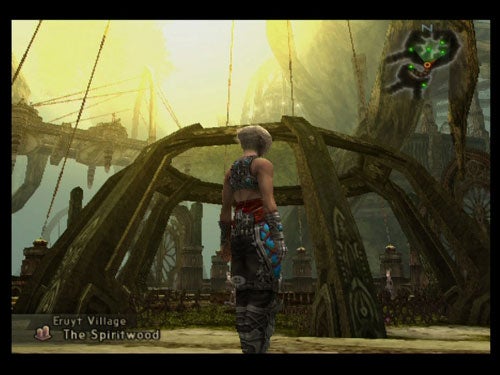 The overall effect is to turn FFXII into a fast-paced, slick and intuitive game, where all the aspects mesh together far better than before. And the good news is that it still looks and feels just like Final Fantasy should. Perhaps there’s a more apparent Star Wars influence than before, both in the cinematic style and the music, but the huge airships and ornate suits of armour we expect from FF are still very much on show. The fact that major names in the development team worked on Square’s underrated PSOne classic, Vagrant Story, also shows through in the character design and dense, ambiguous plotting, while the architecture shows evidence of a North African and Arabian leaning (though nearly all the major characters remain clearly European in style). It’s a heady mix, but one that creates a genuinely exotic and distinctive world, while remaining completely FF. Needless to say, the cut-scenes are completely awesome, even if they do reside in some hideous thick black borders. 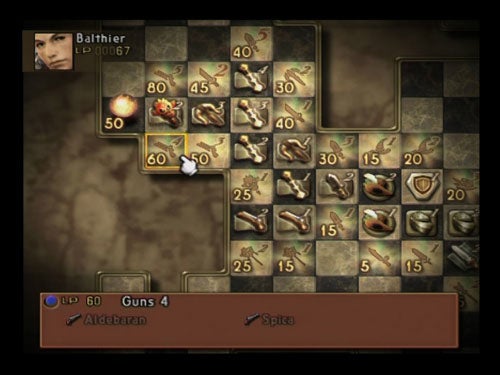 Admittedly, some have complained that the tale feels rather low-key – more Phantom Menace than Revenge of the Sith – but the main cast is likeable, the side-characters interesting, and there is a great sense that the designers are asking you to think about the rights and wrongs of the situation. While at first it seems a simple tale of evil empires and oppressed kingdoms, the more it goes on, the more you begin to question your assumptions, with characters you see first one way, then another.

What’s more, FFXII does a nice line in side-quests. The main pursuit this time is hunting. Every city has a bar with a notice board, and if you find the contact, take the job and kill the right monster in the right location, you can come back and collect the loot. There’s even a guild encountered early on that can give you special bounties to collect. It’s perhaps the clearest note that some ideas have been taken from the online-only FFXI, and as you need every Gil you can get for new gambits, spells and equipment, it actually makes a lot of sense. 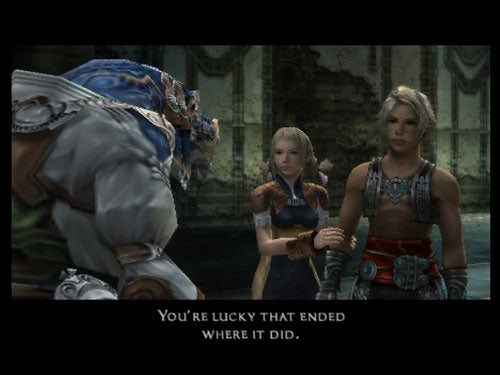 This all hugely positive stuff, so why the slightly sulky eight at the top of the screen? Well, FFXII goes great guns on dragging Final Fantasy into the modern age of gaming, but it still doesn’t quite go far enough. I guess the problem is attention to gameplay detail. At times, the pacing is hideously off. Some dungeons are a tedious slog of endless corridors and countless minor monsters, and at its worst the game can actually be a bore. In some places the designers have clumsily thrown in potentially fatal encounters at the very end of a particularly tiresome twenty-minute stretch, and they’ve done so without putting in a save point first. “Fine”, you might say, “that’s always been the Final Fantasy way”. But when the team has gone to so much effort to make FFXII so much more enjoyable in every other respect, isn’t it a shame that chunks of the game leave you wishing you were doing something else? It would also have been nice to see some summonings – here called Espers – a bit earlier in the game. They’ve always been one of the best parts of the series, so why make us wait so long? 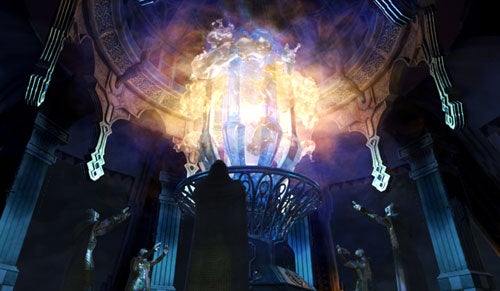 So there you have it: Final Fantasy XII is nearly a genre reinvention of Resident Evil 4 proportions, but in the end it doesn’t quite make the masterpiece grade. That doesn’t mean, however, that it’s not the finest Japanese RPG I’ve played in years. Nor does it mean it’s not a must for those who’ve stuck with the series since its SNES days and those who left it behind after FFVIII. In other words, it’s an essential purchase for anyone with even a casual interest in Japanese RPGs, and – while not perfect – a great base on which this glorious series can build its future. 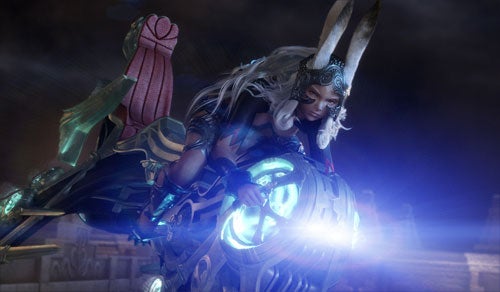 
While the pacing flags from time to time, this is the most enjoyable and accessible Japanese RPG in ages, and an important turning point not just for Final Fantasy, but the genre as a whole.